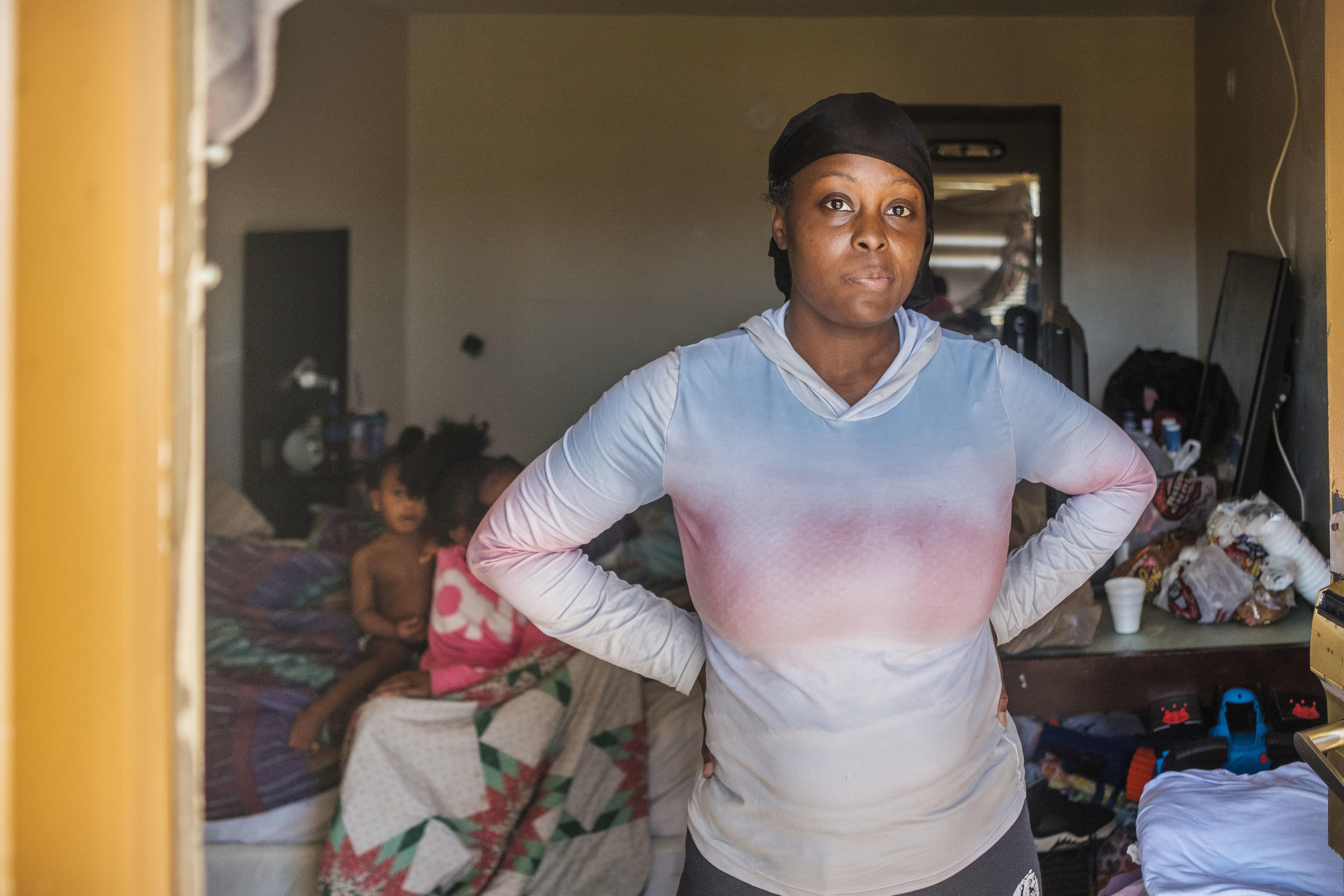 Caption
Keisha Gibson stands at the motel room she shares with her children. Gibson's children meet the definition of homeless twice over under a federal education law. But as a family and under federal housing law they do not, locking Gibson and her kids out of housing aid which could better help her kids succeed in school.
Credit: Grant Blankenship / GPB News

It was midmorning when Keisha Gibson got a knock on her motel room door.

June O'Neal, executive director of the Mentors Project of Bibb County, had arrived to provide linens and food. She dodged rotten floorboards between the stairs and Gibson’s room as she carried things she felt sure Gibson needed.

“Hey, babies!” O'Neal shouted after greeting Gibson. Inside, four kids shared the one bed in the room. Three others were at school. "Yeah, I figured y'all were sleeping. Spreaded out on the floor, so...”

“We’ve got an air mattress,” Gibson responded before negotiating the walkway with O’Neal as they headed back to O’Neal’s car for provisions.

At night, eight people share this single room at the motel. The front desk said rooms start at $225 a week, or about $900 a month before extras. Two rolls of toilet paper will cost you a dollar. Unattended children, a $10 fine. Plus, no cooking in your room. There are “luxury” lofts downtown for less. For now, this is what Gibson can manage.

“I got evicted from my house because I wasn't able to go back and forth to work,” she said.

Like a lot of people, Gibson has no car, and public transportation is spotty in Macon. So she works at a fast food place she can get to on foot. That’s what pays the rent. 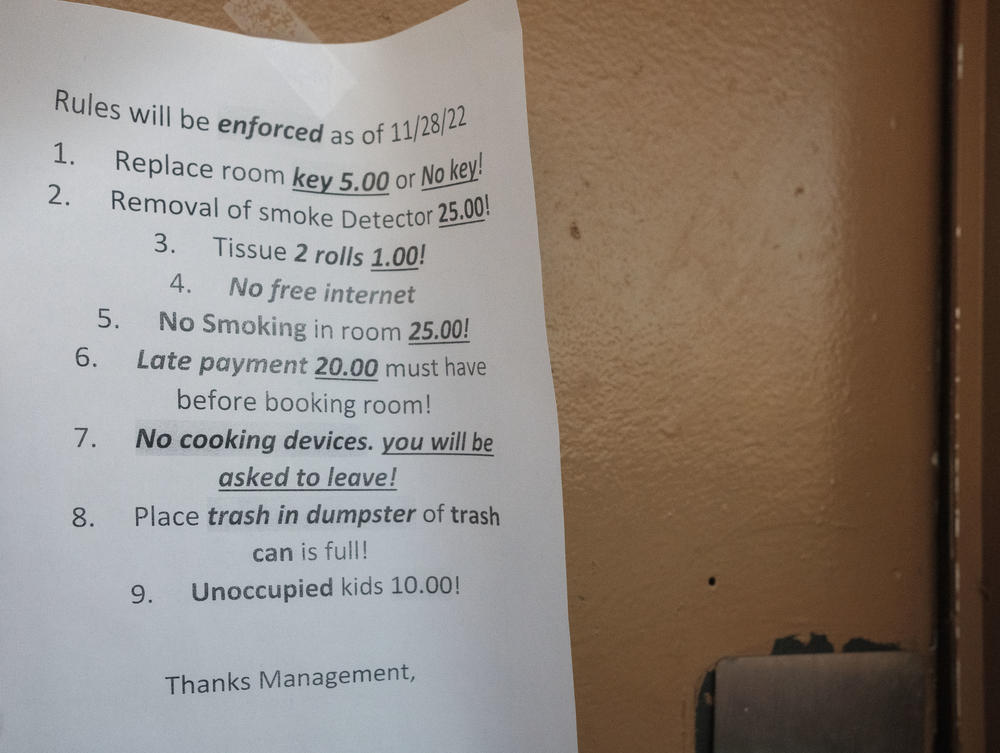 The fees and rules of the motel where Keisha Gibson and her kids live hang upon a door.

When you imagine a homeless person, you may think of someone living on the street. Probably an adult.

But technically, Keisha Gibson’s kids are homeless, too. According to the most recent data from the National Center for Education Statistics, over a million school aged children are known to be homeless. That’s twice the number of unsheltered adults accounted for in the 2021 Point in Time count.

Teachers often know they have homeless students who need support, too. Meanwhile, because of what you could likely call a bureaucratic oversight, only a fraction of those kids get the kind of support they need most.

Having a place to call home matters immensely for education. That’s something Danielle Jones knows all too well.

Jones’ job at the Bibb County School District is looking out for homeless students. When a child is transported from an extended stay hotel to their school across town, that’s because her office made it happen. Jones said in her world there’s a technical term for how Gibson and her kids are living: Doubled up.

Or in other words, living with too many people crammed into too little space for basic mental health. When the stress piles up, even close family might tell you to find another place to live. 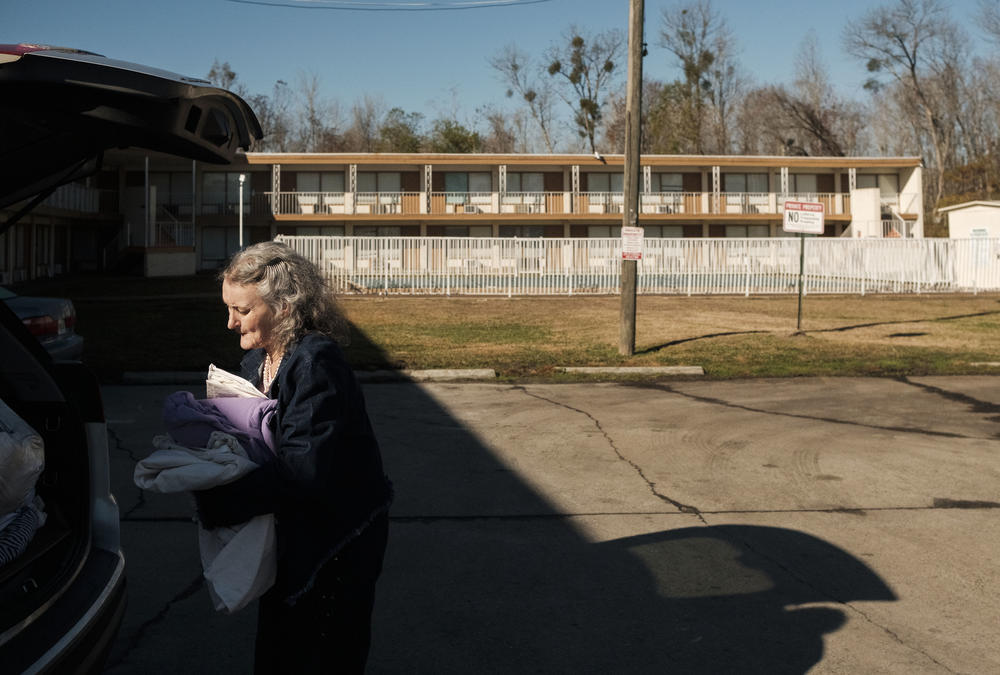 June O'Neal bundles up blankets for Keisha Gibson's family. O'Neal is a long time advocate for youth in Macon who spends most of her days delivering provisions to families.

Under a federal law called the McKinney-Vento Act,  that kind of transience and overcrowding are enough for children to be considered homeless. McKinney-Vento is what sets the guard rails of Jones’ job. She can rattle off the law’s definition of a homeless student at will.

“Anyone that lacks a fixed, adequate or permanent nighttime residence,” she said. “So those are kids that are living in hotels, motels, shelters, campgrounds or any place unsuitable or not designated for living.”

Doubled up in a motel, Keisha Gibson’s kids fit the definition.

This radically decreases their odds of graduating high school.

According to 2019 Department of Education data, homeless students in Georgia graduated 64% of the time. The overall state rate was 82%. Nationally, the disparity is even greater, at 65% vs. 91%.

That’s why people like Danielle Jones in public school districts across the country are required under McKinney-Vento to offer special support.

“We provide anything that helps with educational stability,” Jones said.

“So what that looks like: school supplies, uniforms, book bags. If a child wants to cheer, a homeless student wants to cheer and they can't pay for the cheerleading uniforms. We pay for their band instruments, calculators .... anything dealing with educational stability.”

There are tutoring services and special transportation, too — all aimed at keeping kids enrolled in the same school even as they move from place to place. 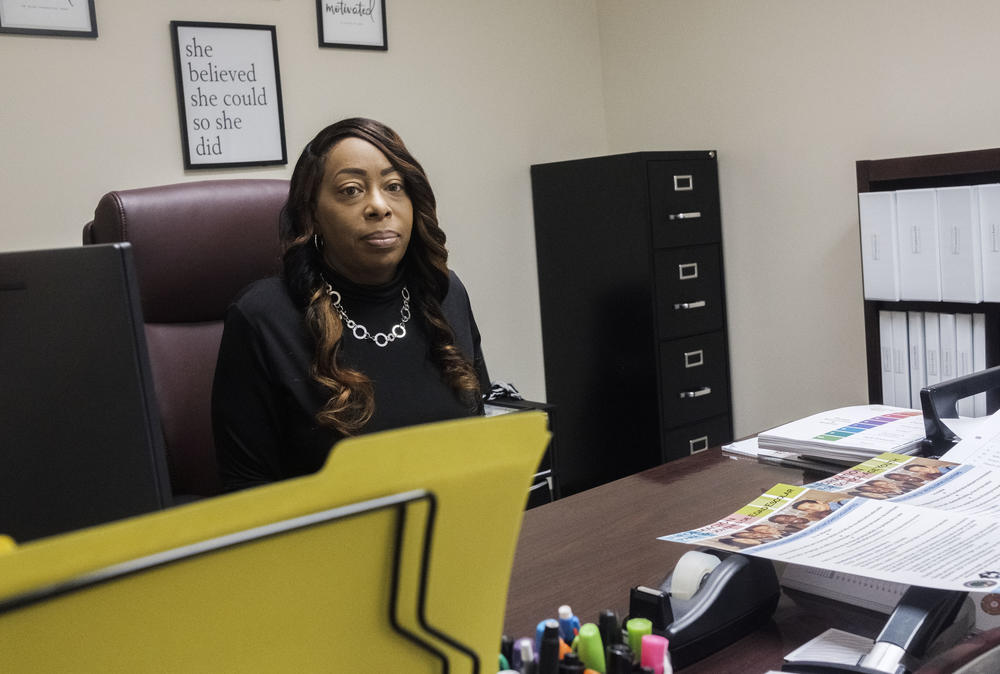 Danielle Jones is the McKinney-Vento liaison for the Bibb County School District where she and a small staff work within the limits of the law to provide stability for homeless students.

On paper, Jones knows she has between 500 and 700 students every year who need a level playing field. She also knows U.S. Census data points to the existence of even more. In total, the federal government disbursed over $122 billion in American Rescue Plan funds for this work just this year. But for all of that, McKinney-Vento leaves one big thing up in the air for students: housing.

“That's the part that we can't provide,” Jones said.

Under McKinney-Vento, Jones is not allowed to help students with arguably their most basic need.

A family looking for help finding and paying for a place to call home, regardless of employment or income, needs another program through the Department of Housing and Urban Development called Rapid Rehousing.

Rapid Rehousing is a cornerstone of HUD’s preferred “Housing First” strategy for alleviating homelessness. The program can provide rent and housing support for up to year. In many cities it leads to something similar but longer lasting termed Permanent Supportive Housing.

In Macon, Rapid Rehousing is run by Carlton Williams at a private nonprofit called the Macon-Bibb Economic Opportunity Council. But while Danielle Jones’ definition of “homeless” takes in a wide gamut of housing setups, the one Williams must stick to is radically more narrow.

“Meaning you're literally homeless, with no roof over your head or you're running from domestic violence,” Williams said.

Whatever else you could say about Keisha Gibson’s motel room, it has a roof. And since to HUD that means she isn’t homeless, by extension her kids aren’t, either.

Williams said that could change.

“If you're doubled up with family, they would have to have given you a notice that you have to vacate their premises,” he said.

Which means to be considered for Rapid Rehousing, Gibson would have to get evicted. Again. Which would likely leave her hoping to get in line for what Danielle Jones at Bibb Schools says is another workaround. 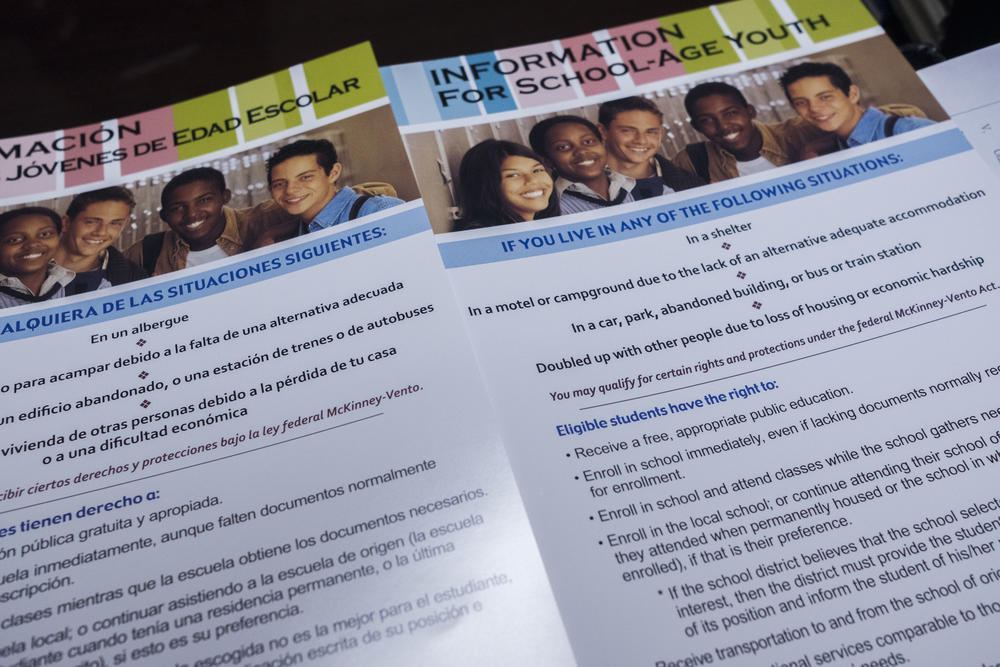 Fliers apprising families of their rights under McKinney-Vento. They're meant to be displayed in schools.

“With rapid rehousing, one of the things to get you moved to the top of the list is living in a shelter,” Jones said. “They're normally almost at capacity or at capacity in most cases. So if you're looking at, you know, we have 500 to 600 kids, which is roughly about 350 families, it's just not enough.”

At one time, Keisha Gibson was HUD homeless and received Rapid Rehousing aid. But despite her children’s needs today, when she was evicted last year and she re-applied, the family was turned away.

Between 2015 and 2021, Bibb County Schools enrolled an average of 682 homeless students annually. In the same period, the Macon Bibb EOC Rapid Rehousing program only touched, on average, a little over a tenth of that number of children every year, about 90.

Barbara Duffield is executive director of  Schoolhouse Connection, a DC-based nonprofit aimed at educating homeless youth. She says the gulf between federal definitions of a homeless child, and basing them on definitions of homeless adults, are to blame.

“Any homelessness policy that's based only on adults, and not taking into consideration how children experience homelessness and the harm it does, is ultimately failing the entire family," she said.

Nationally, while HUD says there are about 81,000 homeless children, the Department of Education counts over 1 million.

“So it's not like this is at 'risk of homelessness' in the HUD world or 'precariously housed' or whatever euphemism,” Duffield said. “This is what homelessness looks like for kids. This is it.”

In 2021, two bipartisan bills, both called the Homeless Children and Youth Act, were introduced in both the U.S. House and Senate.

Either would have reconciled HUD’s definition of youth homelessness with the Department of Education’s. Neither got out of committee.

Duffield said she hopes to see them refiled this year. 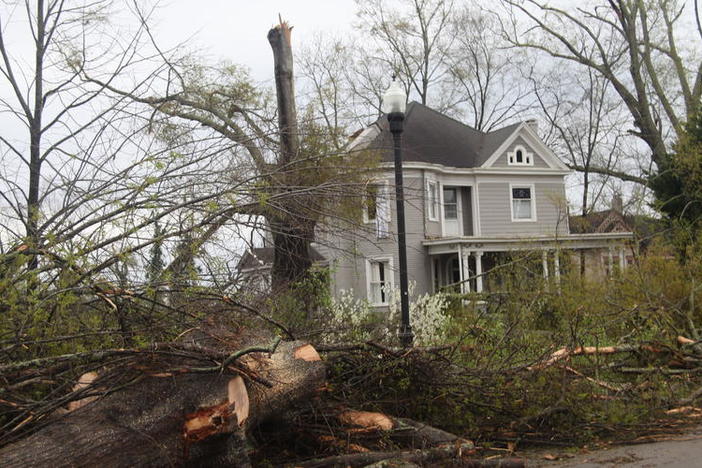 On the Friday Jan. 13 edition of Georgia Today: Gov. Kemp issues a state of emergency, an Atlanta landmark is moving, and a Georgia city has been named a top travel destination. 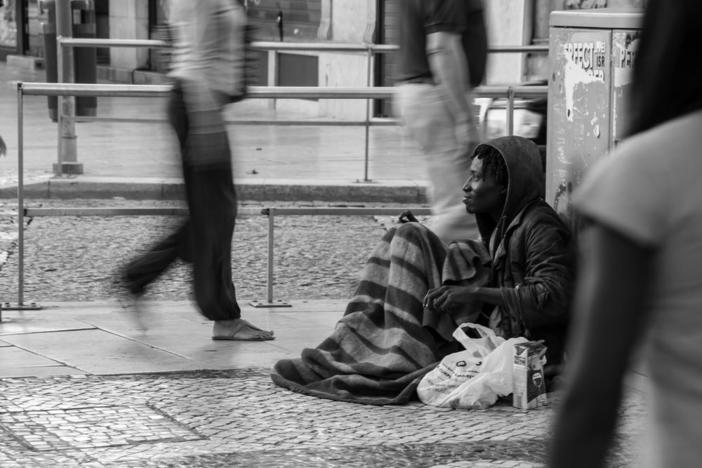 Temperatures will drop into the mid teens Thursday night and stay below freezing that way through the weekend. In order to help those without adequate housing, state and local officials are opening warming centers.