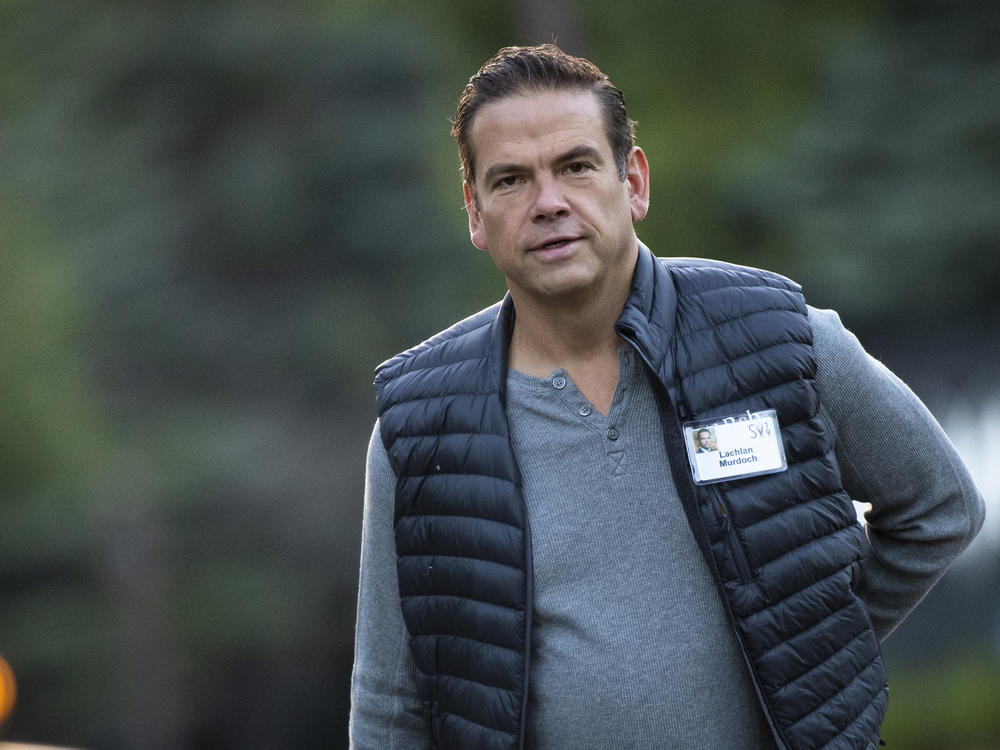 Fox Corp. CEO Lachlan Murdoch, shown above in 2019 in Sun Valley, Idaho, is threatening to sue an Australian news site for defamation over a June 29th column about rhetoric on Fox. In the U.S., Fox News is defending itself against two defamation suits, saying "Freedom of the press is foundational to our democracy and must be protected." / Getty Images

The threat stems from commentaries accusing him of being responsible for rhetoric on the network that helped fuel the Jan. 6, 2021, siege of the U.S. Capitol.

Now the Aussie political news site Crikey has a message: Bring it on.

"Lachlan Murdoch appears desperate to disassociate himself from the actions of Fox in inciting the January 6th insurrection," Crikey's editor-in-chief, Peter Fray tells NPR from Sydney. "And he's taking quite extraordinary steps to shut down public debate in this country."

Fray says his news site was not literally saying Murdoch personally incited people to violence that day. But, Fray says, "the buck has to stop somewhere."

So, in full-page ads set to appear today in The New York Times and the Canberra Times in the Australian capital city, Fray and Eric Beecher, the chairman of Crikey's parent company, Private Media, proclaim they welcomed Murdoch's threat of a lawsuit.

In the written text of their ad, the two men suggested they wanted it to serve as a test of Australian defamation laws, which, they wrote, "are too restrictive." Under Australian laws and precedent, it is much easier for a plaintiff to win a defamation suit than it would be to prevail in an equivalent case in the U.S. - and much harder for news sites to defend against.

Fox Corp declined comment yesterday on the dispute with Crikey.

Murdoch's complaints arose from a June 29th piece driven by revelations about the activities of former President Donald Trump and his allies ahead of the insurrection at the U.S. Congress last year.

Crikey's political editor said Fox was among Trump's top allies, and concluded a column by calling Murdoch and his father Rupert "unindicted co-conspirators" in the siege because of the incendiary rhetoric Fox often aired.

"We at Crikey strongly support freedom of opinion and public interest journalism," Beecher and Fray wrote.

The two men said they decided to publish all the legal demands and accusations against Crikey from Murdoch's attorneys, and the site's replies, "so people can judge your allegations for themselves."

Fox News faces a pair of defamation suits in the U.S.

The flap occurs at the same moment Fox News is publicly invoking free speech ideals as it seeks to defend itself from two multi-billion dollar defamation lawsuits from election technology and voting machine companies in the U.S.

In response to those two lawsuits, Fox News said, "freedom of the press is foundational to our democracy and must be protected."

And the network called the damages sought — more than $4 billion combined — "nothing more than a flagrant attempt to deter our journalists from doing their jobs."

Churchill argued that Crikey had made an "unwarranted attack" in personally connecting Murdoch to the Jan. 6th attacks that was "malicious and aggravates the harm."

Crikey took the post down, saying it was doing so as a courtesy. But no apology was forthcoming, and earlier this month, Crikey re-posted Keane's column.

Its executives told the Sydney Morning Herald that the episode was just one of several moments in which Murdoch had sought to bully the news site.

Australia remains key to the Murdochs

Australia plays a recurring and central role in the Murdoch family's many dramas, both personal and professional.

Lachlan's father, Rupert Murdoch, was born there and made the foundation of his wealth there from a small newspaper granted to him by his father in Adelaide. Nearly two decades ago, Lachlan moved to Australia, seeking to make his own mark, when he quit his father's Manhattan-based media empire over corporate infighting. Lachlan's wife is Australian. He holds Australian citizenship and considers Australia home.

Though Lachlan returned to the fold, and once more helps to lead the family media empire, he moved with his wife and children back to Sydney during the pandemic. They still live there.

In defending its coverage of unproven allegations of voter fraud involving Dominion Voting Systems and Smartmatic election technology companies, Fox Corp and Fox News have argued that the network was merely covering newsworthy, if false, claims made by then President Donald Trump and his allies.

Republican and Democratic election officials at the local, state, and federal level have concluded there was no meaningful election fraud in the 2020 presidential race. Judges appointed by Trump were among the dozens who ruled against the Trump campaign in its legal challenges to the presidential election results. 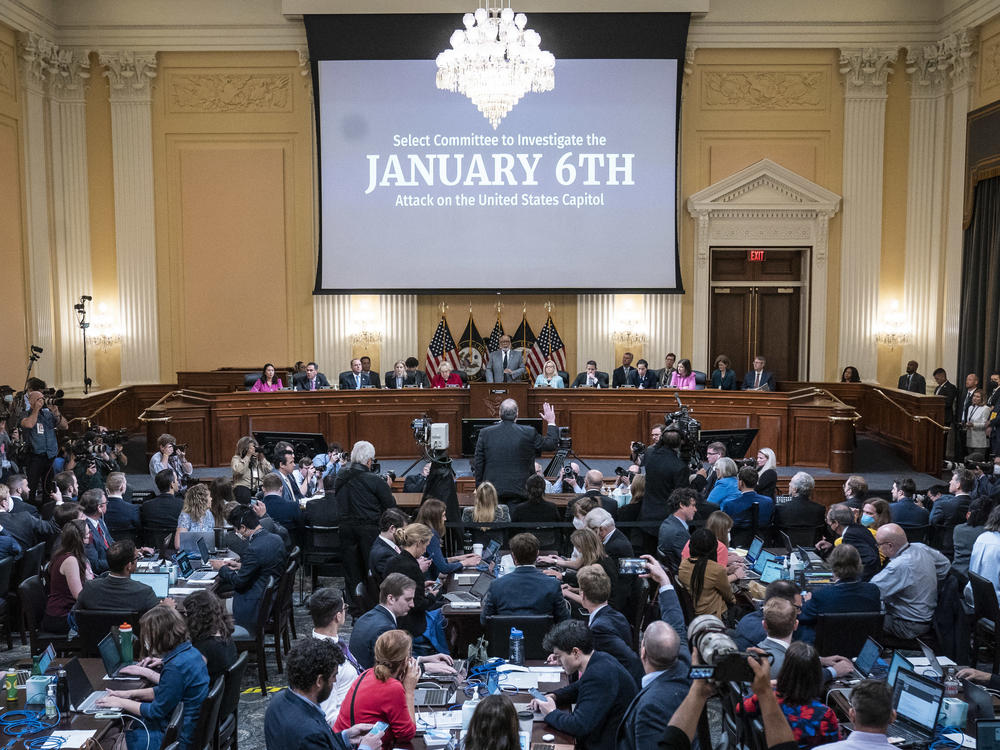 Former Fox News politics editor Chris Stirewalt is sworn in at a hearing of the Select Committee to Investigate the January 6th Attack on the U.S. Capitol in Washington, D.C., on June 13. / Getty Images

The documentary focused on Fox's coverage following the 2020 elections, which it contended boosted Trump's false claims. But Gugar asserted the documentary was biased and false.

His very first objection: the fact it said it relied on network "insiders." He noted that the six former Fox News staffers interviewed by the ABC included people who left as far back as 2016 and 2017, as well as its former politics editor, who was let go several months after the election. (Fox sparked Trump's fury when its decision desk was the first to project that he would lose Arizona on Election Night in November 2020. )

According to two people with knowledge of the matter, the complaint was rejected by the internal unit at the ABC that reviews outside objections. Fox subsequently lodged its objections with the Australian Communications and Media Authority, the regulator that oversees broadcasting there. The regulator has not yet acted upon it.

The Crikey column that started the spat

The latest clash between the Murdochs and the Australian press hinges on a June 29th column by Crikey's politics editor, Bernard Keane, inspired by the revelations of the House Select Committee investigating the January 6th insurrection.

Keane made two references to a Murdoch, though it's not clear whether the initial one pointed at Lachlan or Rupert.

The headline of the column, unmistakably a work of political commentary, calls Trump a "a confirmed unhinged traitor" and goes on to say "Murdoch is his unindicted co-conspirator."

The column's final line reaches a grand rhetorical crescendo to make a case for the Murdochs' moral culpability: "the Murdochs and their slew of poisonous Fox News commentators are the unindicted co-conspirators of this continuing crisis."

Churchill, the attorney for Fox and Murdoch, argues that connecting the Murdochs to such violent acts is unfair, inaccurate and ultimately defamatory.

Fox's attorneys have taken the first steps toward filing such a lawsuit against Crikey. In Australia, such cases are much easier to win than in the U.S.

"We're unwilling to be bullied by Lachlan Murdoch any more," Crikey's Fray tells NPR. "We thought it was important to make a stand for free speech and for independent journalism — something Lachlan Murdoch, his father Rupert, and his grandfather, too, have stood up for over the years." 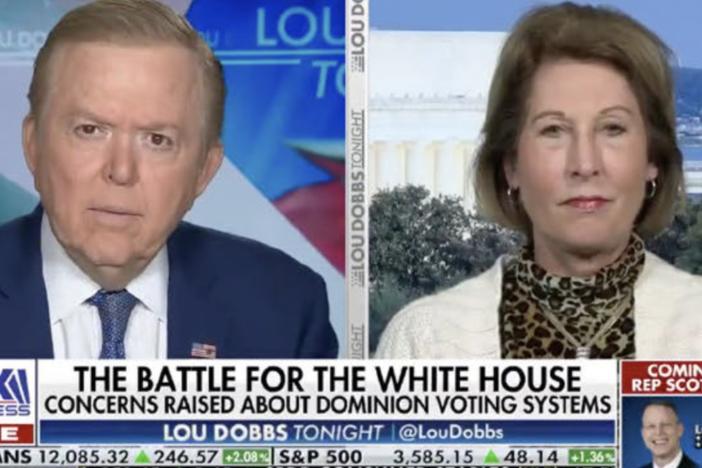 "Fox sold a false story of election fraud in order to serve its own commercial purposes, severely injuring Dominion in the process," the voting machine company's lawsuit said. 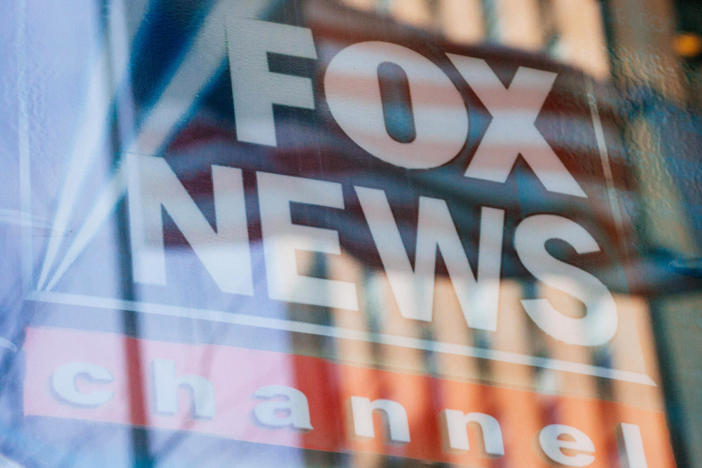 Disproven claims about Donald Trump's loss in 2020, many debunked in real time by Fox's own reporters, are part of Fox News' defense against a $1.6 billion lawsuit brought by Dominion Voting Systems. 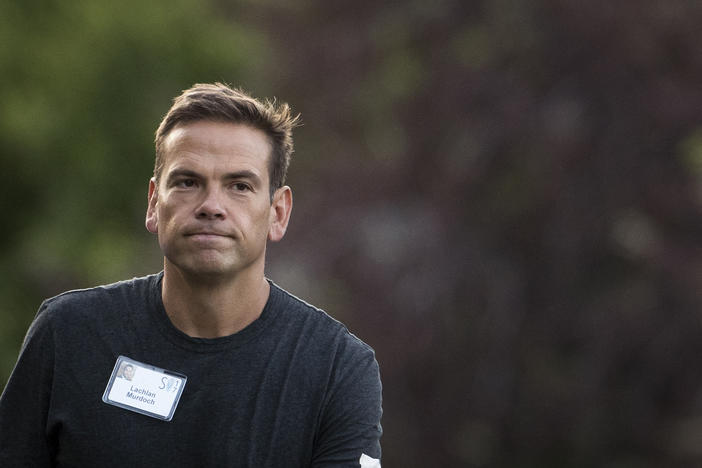 Lachlan Murdoch, head of Fox News' parent company, is scheduled to be deposed Monday in Dominion's $1.6 billion lawsuit against the company.