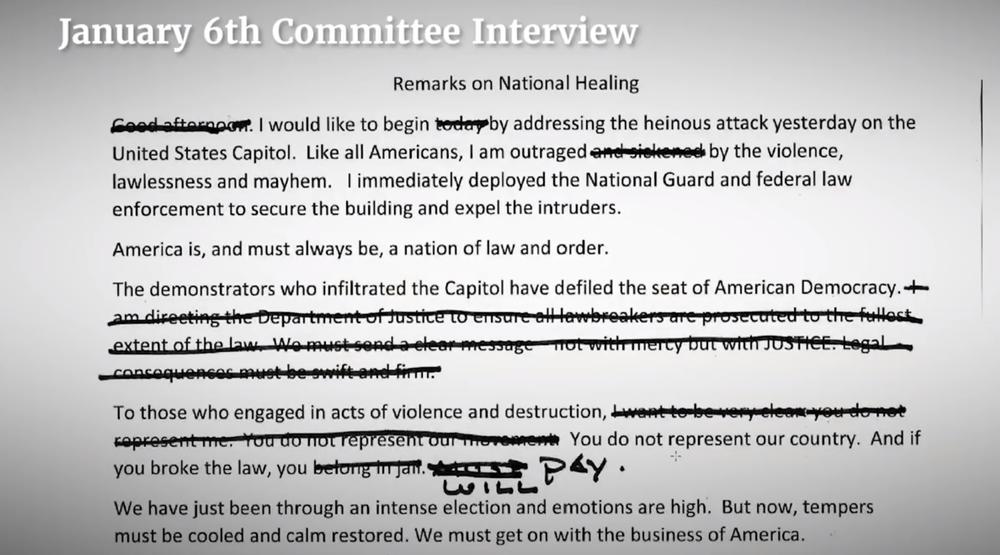 A screenshot from the House Select Jan. 6 panel shows an edited Trump speech prepared for the day after the deadly attack.

New evidence shared by the House Select Jan. 6 Committee shows then-President Donald Trump edited a speech that was aimed at strongly condemning the deadly attack on the Capitol last year.

A document for a Jan. 7, 2021 Trump speech, titled "Remarks on National Healing," shows several key phrases crossed out that would have more strongly denounced the siege. It also shows suggested edits for added words.

"It looks like a copy of a draft of the remarks for that day," Trump's daughter and former senior White House adviser Ivanka Trump told a committee investigator during her recorded video interview. She said plans for the speech began the evening after the riot.

The investigator asked her if she recognized the handwriting on the page, and she responded she did.

The evidence, shared via Twitter by committee member Elaine Luria, D-Va., only showed an excerpt of the speech remarks and not the full document. It adds new revelations from last Thursday's hearing showing Trump in unedited outtakes refusing to say he lost the election or to condemn the attackers more strongly.

From the excerpt shared on Monday, the Trump speech retained its portions referring to the siege as a "heinous attack" and a false claim by Trump that he "immediately" deployed military help to the siege.

However, the document shows some minor and major edits. For example, the words "and sickened" are struck from the sentence, "Like all Americans, I am outranged and sickened by the lawlessness, violence and mayhem."

Larger edits show these sentences struck from the speech excerpt shared by the panel: "I am directing the Department of Justice to ensure all lawmakers are prosecuted to the fullest extent of the law. We must send a clear message — not with mercy but with JUSTICE. Legal consequences must be swift and firm."

The speech also shows references to how the attackers don't represent Trump or his movement also deleted. Another reference telling rioters, "you belong in jail" has the words "belong in jail" crossed out and handwritten in its place is "WILL PAY."

Witnesses told the panel Trump's Jan. 7th video was meant to be more forceful than the Jan. 6th video

"I thought we should give the statement on the 7th and obviously move forward on transition," former Trump White House attorney Eric Herschmann told committee investigators.

Son-in-law and also ex-White House senior adviser Jared Kushner said in his filmed committee interview that he and others brainstormed for new remarks to be given that following day.

"We felt like it was important to further call for de-escalation," Kushner said. 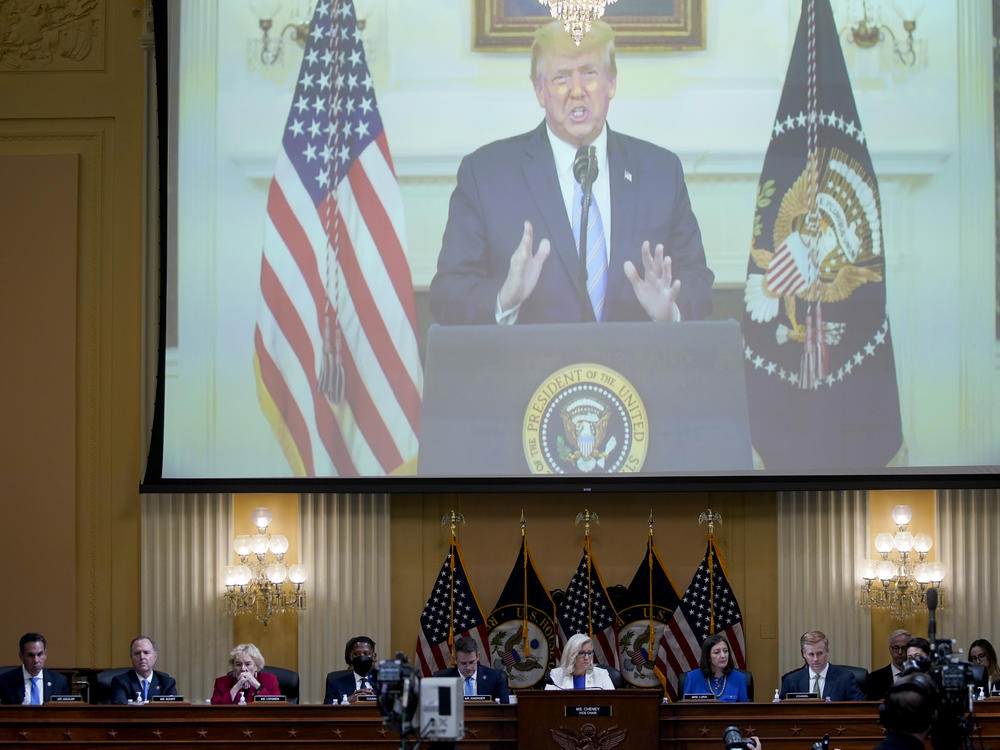 A video of President Donald Trump recording a statement on Jan. 7, 2021, is played, as the House select committee investigating the Jan. 6 attack on the U.S. Capitol holds a hearing on July 21.

Cassidy Hutchinson, former top aide to then-Trump Chief of Staff Mark Meadows, said plans for the Jan. 7th speech were fueled in a large part over a concern the 25th amendment could potentially be invoked to force Trump out.

"So the primary reason that I had heard other than, you know, 'we did not do enough on the 6th, we need to get a stronger message out there and condemn this, otherwise, this will be your legacy,' " Hutchinson told investigators. "The secondary reason to that was that, 'think about what might happen in the final 15 days of your presidency if we don't do this, there's already talks about invoking the 25th Amendment, you need this as cover.' "

During his interview with the panel, former White House counsel Pat Cipollone said he believed Trump needed to say more condemning the attackers.

"In my view, he needed to express very clearly that the people who committed violent acts, went into the Capitol, did what they did, should be prosecuted and should be arrested," he said. 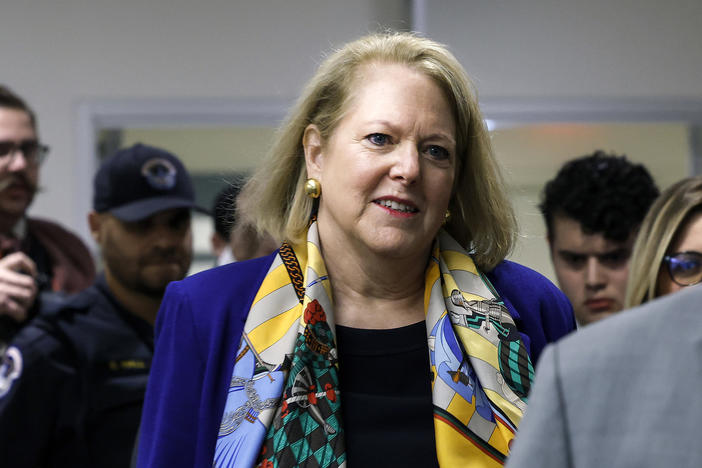 Thomas, a Republican activist, was in touch with an attorney pushing to overturn the 2020 election results. Her lawyer says Thomas testified on Thursday that she played no role in that effort.

Jan. 6 panel postpones its latest hearing because of Hurricane Ian

The hearing, when rescheduled, could conclude its presentations of investigative findings before a final report due later this year. 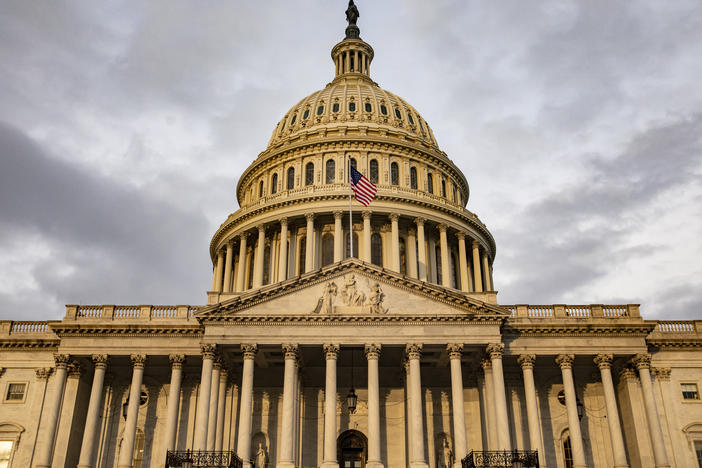 A government funding bill is introduced as Congress races to avoid an Oct. 1 shutdown

The stopgap bill keeps federal agencies funded at current levels through mid-December. But a fight over reforming the permitting process for energy projects is bumping against a Friday deadline.