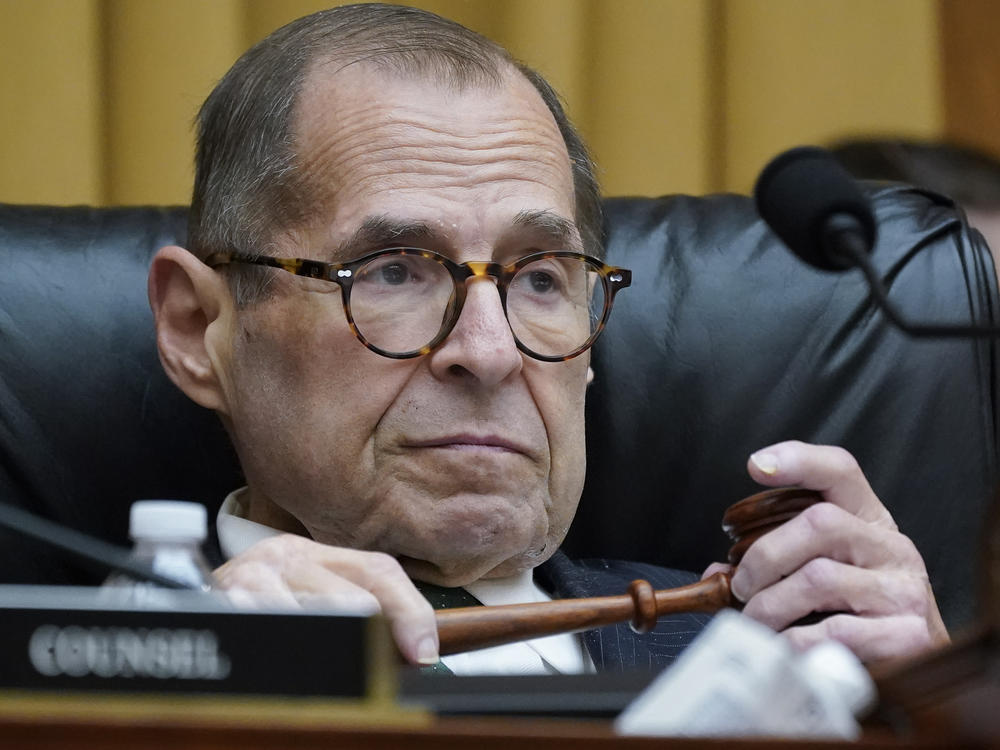 House Judiciary Committee Chair Jerry Nadler, D-N.Y., leads a hearing on the future of abortion rights following the overturning of Roe v. Wade by the Supreme Court on July 14. The House on Tuesday voted to protect same-sex and interracial marriages, a direct confrontation with the Supreme Court. / AP 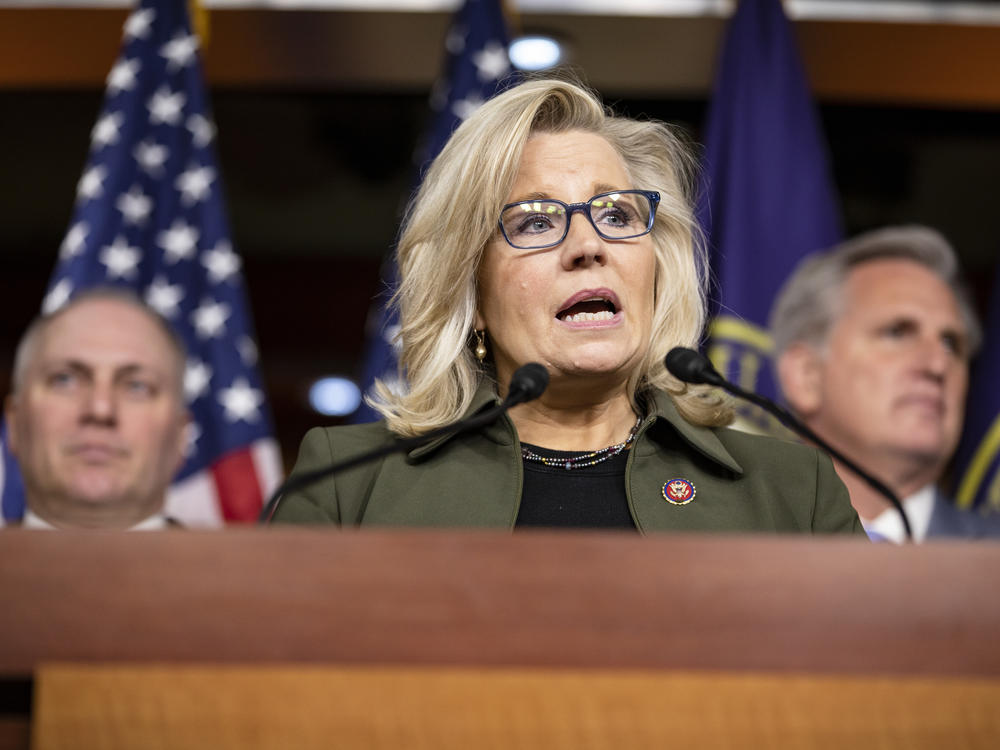 In the midst of former President Trump's first impeachment, then-White House press secretary Stephanie Grisham says he called her into his office at the front of Air Force One. He had been watching one of the hearings and didn't like what he saw.

"He screamed at me, lots of expletives, told me how useless I was," she said. Her sin: "not enough people were on TV defending him."

Despite the former president's apparent dissatisfaction, in 2019 and early 2020 there was a wide-reaching, highly coordinated effort to defend him in the court of public opinion. That isn't the case now, as the House Select Committee on January 6th wraps up its series of summer hearings in prime time Thursday night.

Republican leaders boycotted the hearings, so unlike Trump's televised impeachment trials, viewers haven't seen a vigorous defense of his actions from the dais. And there's not much of a broader outside defense of Trump, either.

A coordinated strategy during impeachment

During the first impeachment, over Trump's withholding of military assistance to Ukraine and efforts to strong-arm the country's leader into launching an investigation of Joe Biden and his son Hunter Biden, the Republican National Committee, congressional Republicans, outside groups, the Trump campaign and a large team at the White House all had a coordinated strategy.

"The president had a dedicated White House staff of press relations people and communications people and lawyers to put together rapid responses," said Steven Groves, who as a deputy press secretary worked on Trump's impeachment defense.

Outside groups ran dozens of TV ads targeting members of Congress over impeachment and defending Trump, calling it "the radical left's impeachment obsession" and a "witch hunt" and a "travesty." There were nonstop cable hits from Trump-friendly surrogates and regular press conferences at the Capitol.

At a press conference in late September 2019, none other than Wyoming Congresswoman Liz Cheney came to Trump's defense.

"Ever since President Trump was elected, the House Democrats have been careening from impeachment theory to impeachment theory," she said in her capacity as a member of the House Republican leadership. "But what we see repeatedly is a complete lack of focus on concern about evidence and facts."

Today, excommunicated from leadership for her criticism of Trump and Jan. 6, Cheney is vice chair of the House select committee, arguing Trump is a threat to democracy. But other congressional Republicans, still in his corner, simply aren't defending Trump in the same way they did during the first impeachment.

A decision by Kevin McCarthy, the Republican leader in the House, not to name anyone to the committee means the Jan. 6 hearings are a one-sided presentation of evidence, more like a grand jury proceeding than a trial. They are nothing like a traditional congressional hearing with the whiplash of representatives from both parties scoring partisan points and asking leading questions. But the sorts of press conferences led by Trump allies in Congress that were standard during impeachment have all but disappeared along with the flood of cable appearances.

"There hasn't been as much of a sort of day-to-day focus from the congressional members who go on Fox as there was in the past," said Matt Gertz, a senior fellow at the progressive group Media Matters for America. Part of the reason for that, he said, is they aren't on the committee, so they don't have insight to add about the committee's inner workings and they don't have clips of explosive hearing exchanges to talk around.

"Fox News and others in the right wing media are spending less time engaging on a point-by-point basis than they did, say, during Donald Trump's first impeachment," said Gertz, whose job is to closely monitor the conservative media ecosystem.

And there isn't a defense during the commercial breaks, either. An analysis from the tracking firm AdImpact found more than 120 different anti-impeachment ads in 2019 and 2020. Some were from candidates, including Trump, but most were from outside groups. This time around there have been fewer than 20 ads mentioning the Jan. 6 investigation and those are mostly ads for primary candidates running against anti-Trump Republicans.

Groves says a big reason for the lower-octane public defense is simply that Trump is no longer president. The infrastructure that was around the president doesn't exist for the post-presidency.

"It's just not there anymore," said Groves. "He can't even go on Twitter and rapid-response on his own."

Trump was kicked off of Twitter on the day of the riot at the Capitol.

Other than a skeleton crew of staff working for Trump in his post-presidential office, who didn't respond to a request for comment, there's no one whose job it is to publicly defend him. Doug Heye, a former communications director for the Republican National Committee, says there's no reason the RNC should be going to bat for him, especially with the midterms coming.

"The RNC and Republicans on Capitol Hill know they are poised for a great election year and what's the biggest thing that could be a hurdle to that? Donald Trump, who is not their principal anymore," Heye said. "So it's not their job to defend him and sometimes you just don't want to defend the indefensible."

A big argument from Trump allies is that these hearings are one-sided and dull. Filling inboxes and airwaves with rapid response messaging could undermine that argument.

"We really prepared for this epic battle and we also prepared for it to be a dud," said Matt Schlapp, who runs the pro-Trump group CPAC. It created a "J6Facts" Twitter account, which has about 2,000 followers now, and hired extra consultants, Schlapp said.

"It was a little dramatic in the beginning but over time it's been more of a dud," he said.

Of course, he has a reason to say that. When he is invited to appear on Fox News and its competitors, Schlapp largely discusses inflation, immigration and crime, themes that are getting a lot more airtime than the hearings, and that Republicans see as a winning message for the midterms.

Schlapp says the stakes just feel lower with these hearings than they did with impeachment because "They can't do anything to the president. They can't prevent him from running."

If the hearings break through, with no coordinated defense of Trump's reputation, it could hurt his chances should he run for president again. 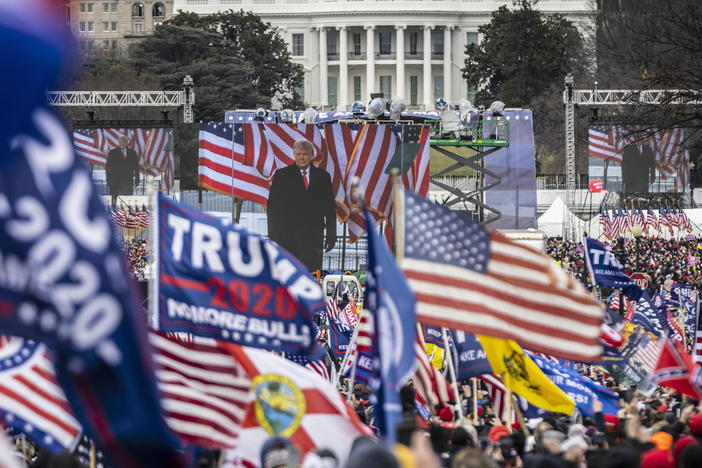 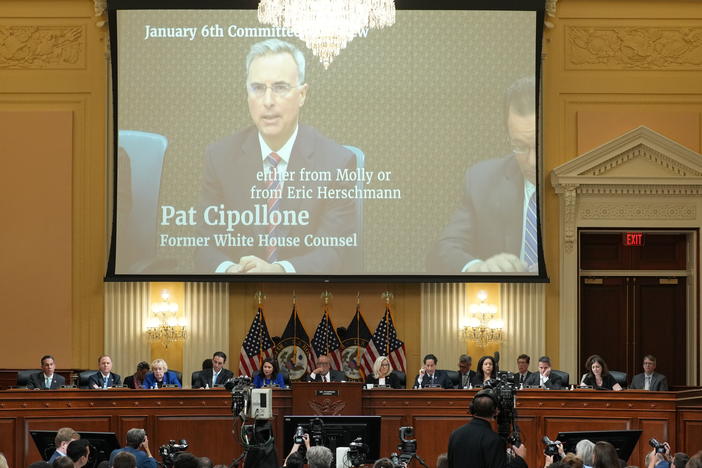 The meeting that changed history and 3 other takeaways from the latest Jan. 6 hearing

Trump made a fateful choice in the early morning hours of Dec. 19, 2020, days after the Electoral College voted, to choose a path that led to the insurrection on Jan. 6. 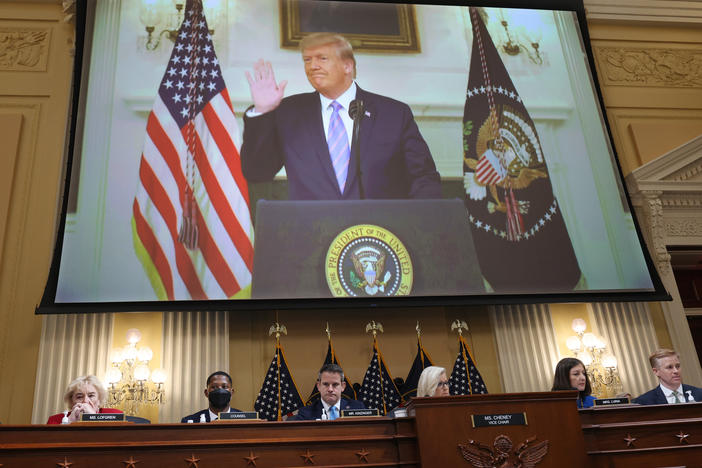 As Jan. 6 panel pauses, the U.S. faces a fourth fall of Trump (with a fifth in view)

Even if the January 6 investigation had wrapped this week, the former president would still be looming over the fall landscape like a rising harvest moon.