During an Atlanta Press Club-hosted Republican primary runoff debate Monday, Rich McCormick and Jake Evans sparred over who would be the most qualified to serve the 6th, which now runs from Cobb County to Dawsonville and is overwhelmingly Republican following last fall's redistricting.

McCormick, an emergency room physician who was the party's nominee in 2020 for the old 7th District, said America has a big problem with drug pricing and affordability.

"We have a middleman problem, too," he said. "That's where the big part of inflation is happening, in medical health care costs. We need pricing transparency across the board, including with health care centers, with the access to medicine."

Evans, an attorney who previously served as the chair of the state ethics commission, touted his support from former President Donald Trump and said Georgia should move to closed primaries that require you to register with a party.

"What I'm now for is ensuring Republicans elect Republicans that will represent them, that Democrats don't infiltrate, manipulate, influence our elections, which is what happened two Tuesdays ago," he said.

But there is no evidence that results were manipulated, or that Democrats who pulled a Republican ballot provided a decisive margin in any race.

McCormick garnered the most votes in the May 24 primary but failed to clear the 50% plus one vote margin to win outright. Trump's slate of candidates did poorly overall in Georgia's primary, with former Sen. David Perdue, John Gordon and Patrick Witt suffering blowout losses in the governor, attorney general and insurance commissioner races, respectively, and U.S. Rep. Jody Hice losing to incumbent Secretary of State Brad Raffensperger.

There were some bright spots for the slate: Former football star Herschel Walker easily crushed his Senate primary opponents and state Sen. Burt Jones narrowly won the lieutenant governor primary outright, while Evans in the 6th and Vernon Jones in the 10th secured runoff slots.

Much of the debate saw the two candidates lob personal attacks over the conservative credentials of the other in a race that will essentially decide who will cruise to victory in the heavily Republican district in November.

McCormick accused Evans of flip-flopping on a number of positions and highlighted Evans' past criticism of Trump, while Evans claimed McCormick was a moderate who would compromise with Democrats if elected. 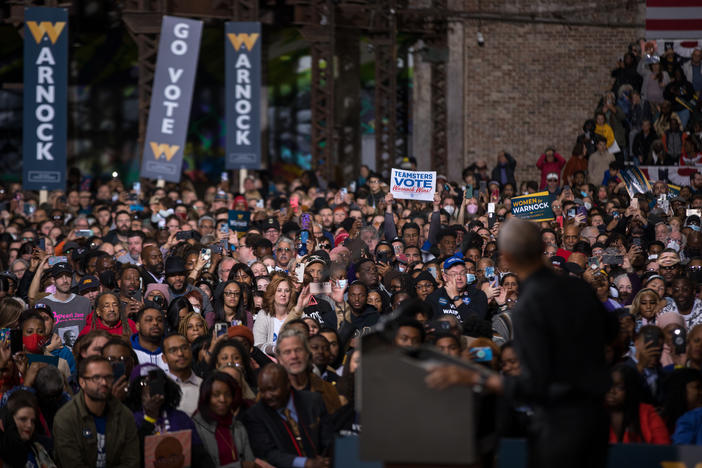 Former President Barack Obama joined U.S. Sen. Raphael Warnock for a rally at Pullman Yards in Atlanta on Dec.1, 2022, just days ahead of the Dec. 6 runoff.