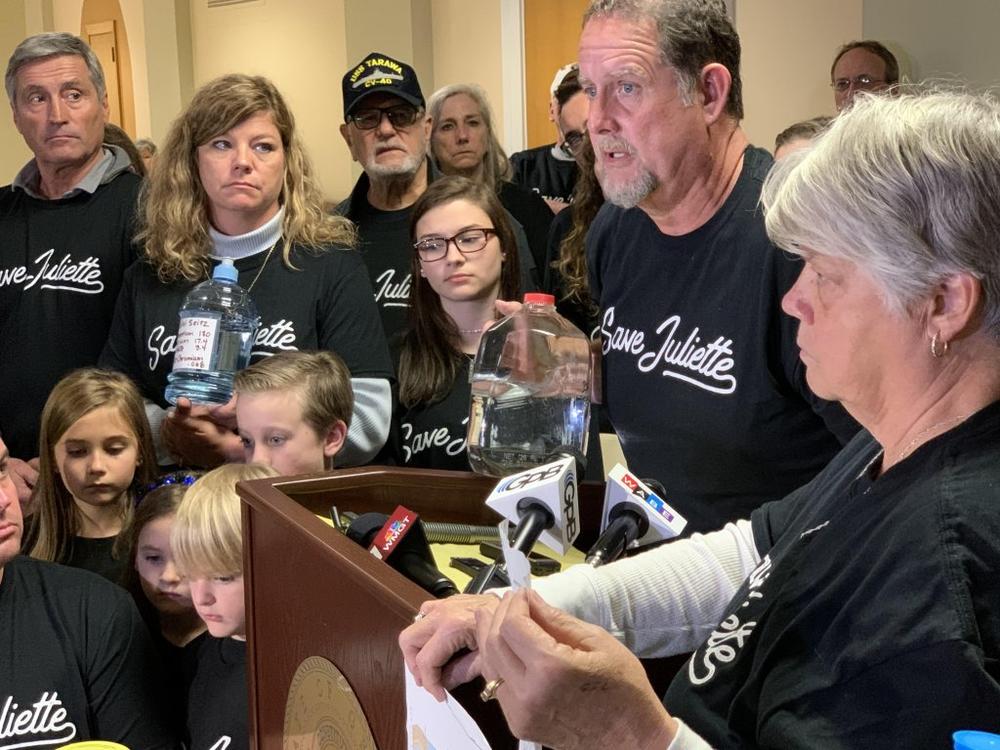 Gloria Hammond, far right, was part of the large group of Juliette residents who visited the state Capitol two years ago to push state elected officials to intervene in Georgia Power’s coal ash disposal plans. The county is now installing a water line so residents can access clean water, but Hammond says residents still want the coal ash moved to a lined landfill.

Andrea Goolsby speaks wistfully about the taste of water fresh from the well at her childhood home in Juliette.

“There’s just something about getting well water from a water hose on a hot summer day,” Goolsby said in an interview.

But the days of cooling off with well water are just a bittersweet memory now for many residents of this small town north of Macon and home to Plant Scherer, which is the largest coal-fired plant in the country. The plant is set to power down by 2028 as Georgia Power works toward phasing out coal production completely by 2035.

When it closes, the plant will leave behind about 16 million tons of toxic coal ash, which is the waste generated when coal is burned to produce energy. Plant Scherer is one of four Georgia Power sites where coal ash is poised to be left in unlined pits where it is in contact with groundwater.

Georgia Power argues the coal ash has not compromised drinking water standards and intends to cap the coal ash in place where it is now, although those plans have recently been thrown into question after federal environmental regulators pressed the state Environmental Protection Division to review them. 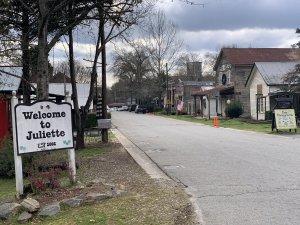 Downtown Juliette is known for the Whistle Stop Cafe made famous by the movie Fried Green Tomatoes. The one street downtown is so small some locals quip that you’ll miss it if you blink.

But the presence of contaminants found in coal ash, such as hexavalent chromium, in the well water near the plant has for years left residents like Goolsby’s family members turning to bottled water for drinking, cooking and other daily uses.

A filling station set up at the local Maynard Baptist Church and a large water tank from the Georgia Emergency Management and Homeland Security Agency have also helped residents get by in the meantime.

Another option is slowly working its way toward residents in Monroe County living near Plant Scherer: a 73-mile county water line that will pipe in clean water. About 900 homes could be connected when the project wraps up, potentially by the end of the year.

Connecting is not free, though. Residents who signed up early could pay a reduced $500 fee, plus other costs, to tap into the water line. The expense increases for those whose homes sit farther off the road.

“It’s like a double-edged sword,” Goolsby said of the water line. “People love their well water, but they can’t drink it because it’s contaminated.”

'This is a prayer answered for a lot of folks'

Frustration over their contaminated water moved dozens of Juliette residents to fill jugs with their spoiled well water and travel to the state Capitol in 2020 to demand lawmakers and the governor intervene and help.

A group of residents has also signed onto a still-pending lawsuit arguing the industrial waste is “poisoning” locals who have suffered health problems — such as a higher rate of cancer — and diminished property values.

Monroe County officials drew up plans for the water line project two years ago to provide access to clean water to those living near the plant. The price tag, though, quickly grew out of reach because of supply chain shortages first driven by the COVID-19 pandemic and more recently worsened by the fallout from the Russian invasion of Ukraine.

The escalating price tag cast doubt on the county’s ability to finish the now $21 million project, but the state has stepped in and plugged the budget shortfall with a $6 million federal grant. The award is part of the $422 million in federal coronavirus relief funds doled out this year for water and sewer infrastructure projects across the state. 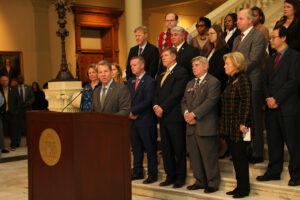 A panel of lawmakers and state officials, including the Environmental Protection Division’s director, signed off on the projects, and advocates say they see the grant as an important acknowledgement by the state.

“I think that starts to renew some level of trust with the state from the community,” said Fletcher Sams, executive director of the Altamaha Riverkeeper, an advocacy group that spent years testing residents’ private wells for contaminants. “This is prayers answered for a lot of folks.

“These people have been drinking unsafe water for decades and have known about it for years and had to get their water from extreme sources, like driving miles away to the community church water station or to the water buffaloes provided by GEMA,” Sams added.

Georgia Power has not contributed any funding or aid to the local water line project.

John Kraft, spokesman for the Georgia Power, said “the data collected from the more than 100 groundwater monitoring wells at Plant Scherer shows that nothing above a federal drinking water standard has left our property.”

A trade association that represents Georgia Power is now attempting to block the U.S. Environmental Protection Agency from requiring utilities to store coal ash waste where it is not contact with groundwater.

The Utility Solid Waste Activities Group filed a petition in a federal appeals court last month that argues the EPA was out of line in January when the agency rejected a few permits in other states for groundwater-related “deficiencies.” At the time, the EPA also sent a letter to Georgia regulators asking them to take another look at Georgia Power’s permits, and that letter was cited in the association’s legal challenge. 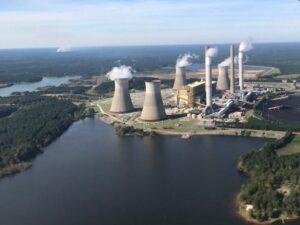 Plant Scherer in Juliette is one of the four plants where Georgia Power plans to leave coal ash waste in unlined pits, where it sits in groundwater.

Georgia Power and the head of EPD, Richard Dunn, have referred to the EPA’s announcement as a change in course, but advocates argue the federal agency is stepping up enforcement, not changing the rules.

“It has been absolutely clear — in the plainest English language since 2015 — that you cannot close a coal ash lagoon by capping it in place and leaving ash in water,” Frank Holleman, a senior attorney with the Southern Environmental Law Center, said in an interview last month.

Holleman called the association’s petition a “tactical move” to kick the can down the road on behalf of some utilities that are attempting to skirt the rule even as other utilities in South Carolina and North Carolina clean up their coal ash.

The Southern Environmental Law Center announced Friday it has filed a petition to intervene in the federal case on behalf of the Altamaha Riverkeeper, the Chattahoochee Riverkeeper, and the Coosa River Basin Initiative in Georgia.

“Georgia Power has some sites that it wants to leave coal ash sitting in groundwater by major rivers in Georgia, where it will continue to pollute and create the risk of catastrophic failure forever,” Holleman said, noting that the country’s two major coal ash disasters happened in the Southern region.

Georgia Power is digging up the coal ash at some of its sites, such as Plant Branch in Milledgeville. The utility announced early this year it may also excavate the coal ash at Plant Wansley just south of Carrolton, where the bottom of the coal ash sits deep in groundwater.

“This is entirely doable by Georgia Power. There’s no question about it,” Holleman added. “They just want to avoid doing it if they can get away with it.”

'What we hope is the right thing will be done'

In Juliette, residents are still advocating for the coal ash at Plant Scherer to be moved to a lined landfill where it will not be in contact with groundwater.

And while important, the water line and the clean water it brings is only part of the solution, Goolsby said.

“We’re obviously very thankful for (the federal funds),” Goolsby said. “But is that just a little bit of give to the citizens in Monroe to kind of stop the fight against coal ash? To kind of pacify our desires?

“What we hope is the right thing will be done, but as we found through this fight for clean water, the people’s interests are not always put first. We’ve learned it’s more profit over people. It’s all about money.”

Gloria Hammond, who lives about a mile from the plant, is waiting for a friend to help finish connecting her house sitting off in the woods to the water line, which she said will help with the cost. Without his help, she estimates it might cost close to $3,500 to tap into the water line.

Once she connects to the public water supply, she will no longer need to drive to Maynard Baptist Church every week or so and fill several gallon-sized jugs to bring home clean water for her and her granddaughter.

But even when that day comes, Hammond said it won’t change her mind about what should be done about the massive piles of toxic coal ash left behind at Plant Scherer. Hammond was also among the residents who visited the state Capitol two years ago to press state elected officials to intervene.

“Most of us wish they would get rid of the coal ash, get it out from over there and do what they have to do but do it properly,” Hammond said. “They say, ‘Well, we’re going to put a cap on it.’ No, you’re not. You’re putting a Band-Aid on it. You’ve still got a problem there, and it’s going to be for hundreds of years as long as it sits there.” 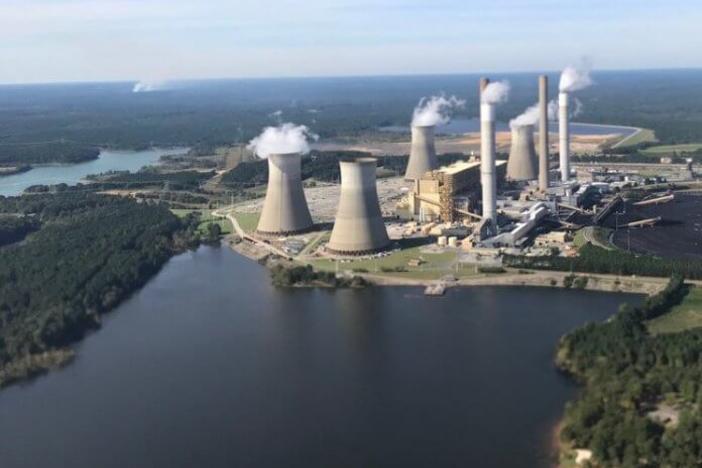 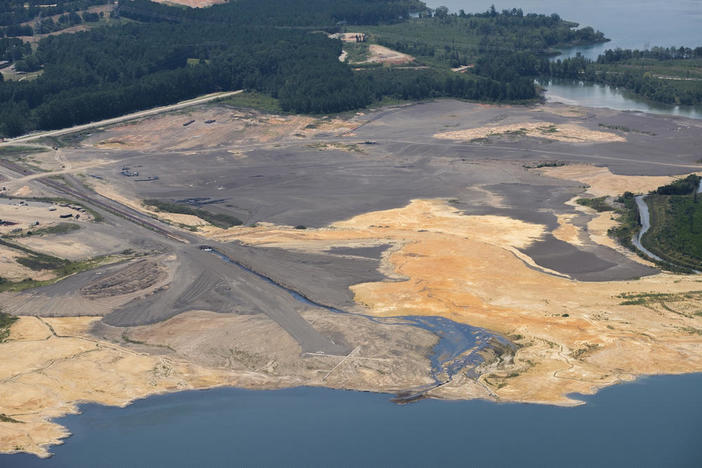 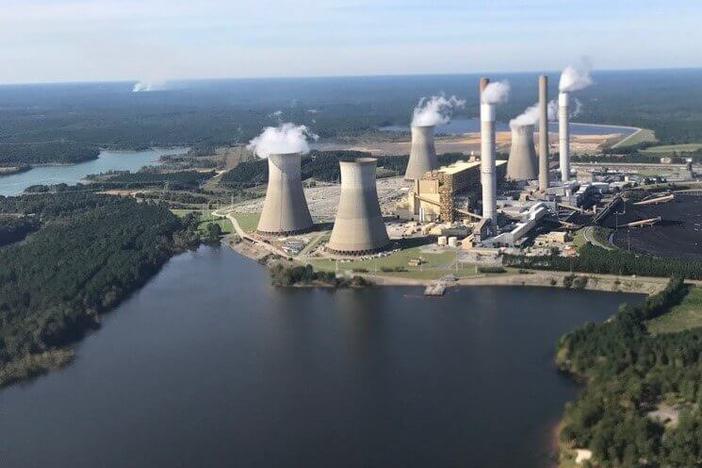