'The Staircase': A drama about a docuseries about a 20-year-old murder case 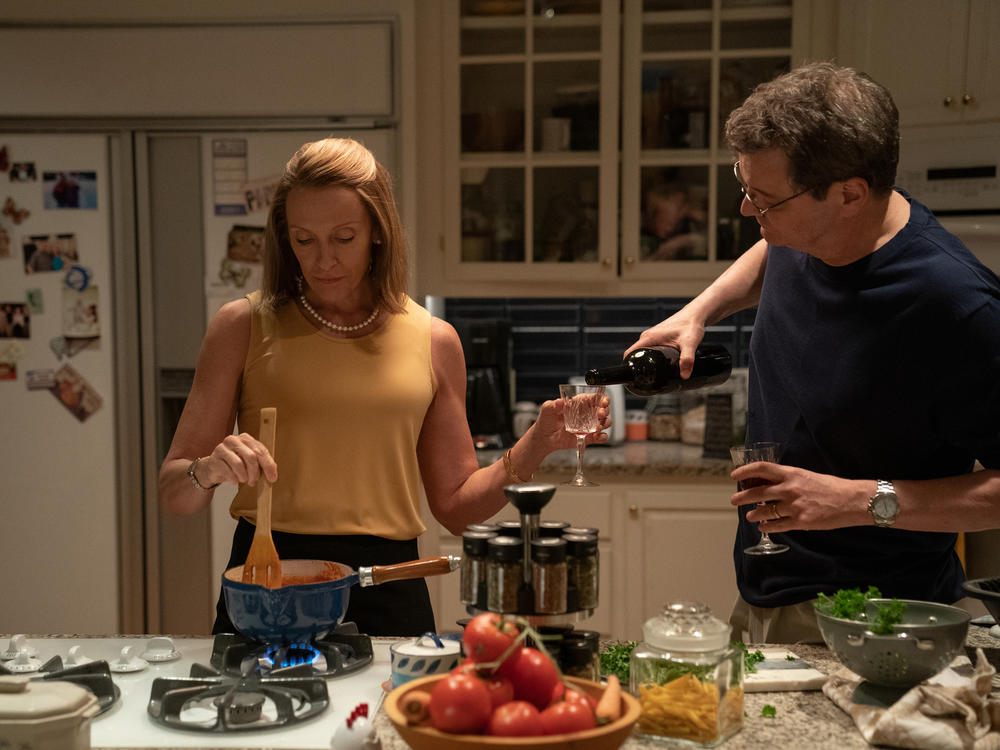 Toni Collette and Colin Firth in The Staircase.

It's always interesting when you find yourself at odds with other critics. I used to observe a strict rule of not reading anybody else's opinions about anything until I was sure I was done writing or saying everything I was going to write or say, just to make sure I wasn't influenced. But more recently, I've learned that expectations and track records and a variety of other factors can make it hard to feel like a blank slate when it comes to a piece of art. And sometimes, seeing what someone else has said clarifies my own thinking — sometimes because I think they're right, and sometimes because I think they're wrong. So while I don't seek out reviews of things I'm not finished talking about yet, I don't avoid them either.

I bring this up because I found myself impatient with the well-reviewed HBO Max series The Staircase, created by Antonio Campos. (See the positive reviews in The Hollywood Reporter and Vanity Fair, for instance.) It stars Colin Firth as Michael Peterson, the Durham, NC writer who was convicted of the murder of his wife, Kathleen, and became the subject of a popular 2004 documentary series also called The Staircase.

Many years after Peterson's conviction, after a judge concluded that some of the expert testimony in his trial was false, Peterson was granted a new trial. Rather than try him again, the state allowed him to make an "Alford plea" — essentially a guilty plea where you maintain your innocence but admit the state has enough evidence to convict you. He was sentenced to the time he had already served and was released. (Alford pleas were also the final resolution of the cases behind the Paradise Lost documentaries.)

For a while after its release, the original series of The Staircase was hard to find for U.S. audiences. But as the case continued to twist, additional episodes were added in 2013 and 2018, and the whole thing wound up on Netflix. Particularly with that added exposure, it's probably one of the most influential true-crime works of the 21st century. It even inspired Trial & Error, an NBC parody series starring John Lithgow. 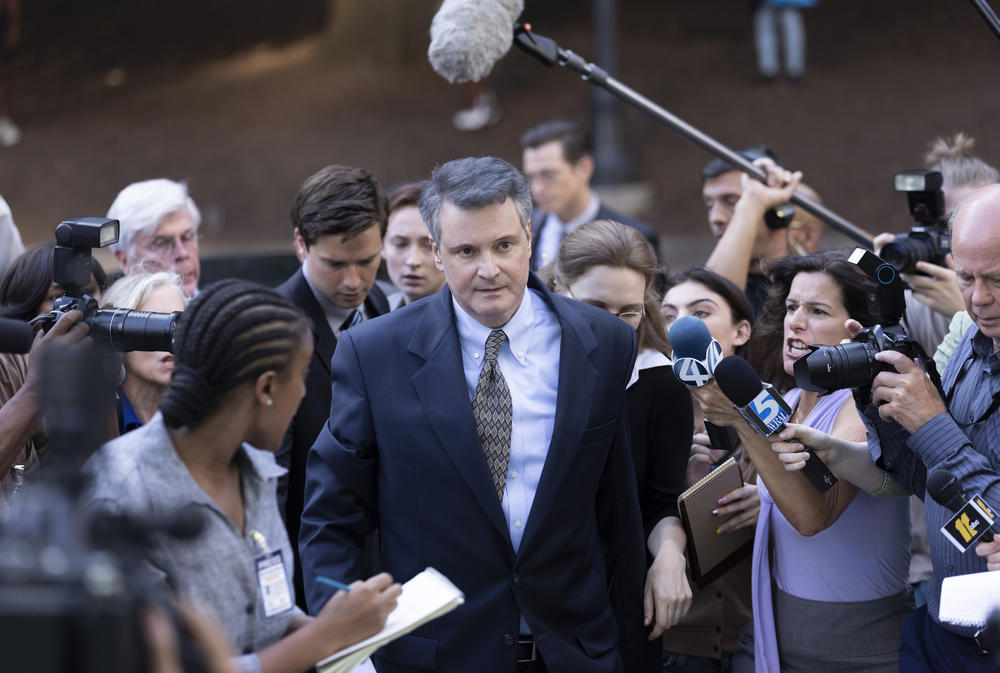 Colin Firth in The Staircase.

Perhaps its ubiquity is why my initial reaction to hearing that there was to be a scripted series, even one with a cast that includes Firth, Toni Collette (as Kathleen in flashbacks), Michael Stuhlbarg (as Michael's lawyer) and Parker Posey (as one of the DAs), was exhaustion. There are an awful lot of stories right now that receive some exhaustive documentary treatment – in this case, more than a decade of it – that seems like it has to have pulled just about every interesting thread, until you wonder what can possibly be left.

Five episodes of The Staircase, out of what will eventually be eight, were given to critics. In those five episodes, the show does two interesting things to try to get around some of the limitations of these shows. The first is the danger of duplicating the documentary, which it escapes in part by incorporating its making. Vincent Vermignon and Frank Feys play the documentary director Jean-Xavier de Lestrade and producer Denis Poncet, who connect with Peterson to begin filming him and his team shortly after his case begins, and whose work ultimately becomes critical to the notoriety and maybe even the resolution of his case.

The other problem is specific to the case at hand here: that there's not an agreed-upon conclusion to this story. Michael ultimately pled guilty without admitting guilt, and despite his conviction, there remains some debate about whether he is actually guilty or not. This is particularly relevant to flashbacks to Michael's marriage to Kathleen, including an examination of what role his bisexuality played in their relationship. The prosecution claimed at trial that Kathleen discovered he was in contact with male sex workers and that this led to an argument during which Michael killed her; he claimed she knew about it and wasn't bothered.

The series (at least through five episodes) is resolute about not taking a position about whether Michael killed Kathleen or not. In fact, it will show you both a speculative scene where it was an accident and a speculative scene where it was murder. This means trying to truthfully tell the story of a marriage without committing to whether it does or does not end in a homicide. Firth and Collette are gifted actors when it comes to emotional nuance, but ambiguity about this fundamental question (and about the claimed motive), justified by the available evidence as it may be, requires them to play scenes so as to make them plausible chapters in two wildly different stories. As good as they are, it's an awful lot to ask of actors, and it makes Kathleen feel half-developed, since you can't know to what degree she is fully informed about her own relationship.

The most successful part of the series is the part that turns the least on whether Michael is in fact guilty, which is the shifting allegiances of his kids (the kids, after all, don't know for sure what happened either). The members of the cast involved in this story — including Sophie Turner and Odessa Young as the young women Michael took in after the death of their mother, a friend, Dane DeHaan and Patrick Schwarzenegger as the sons Michael had before he and Kathleen married, and Olivia deJonge as the daughter Kathleen had — are very good.

But there's an awful lot going on. That story about the documentarians tries to delve into their ethics and their power squabbles over recognition and control and credit. There's a story about how prison affects Michael between his conviction and his release and how he gets by in the meantime. There's a whole story featuring Juliette Binoche that doesn't kick in until the fourth episode. And at the very end of that fifth episode, you learn that yes, they'll be covering the so-called "owl theory," which posits that Kathleen neither fell (as Michael claimed) nor was murdered (as the prosecution claimed) but was attacked by an owl and died from her injuries.

The filmmaking itself is exceptional. The whole show looks great, and the editing (particularly given the complicated structure) is quite brilliant: There is a sequence in which an elevator door closes, and the editing alone tells the story of an entire family in about five seconds. The weaving in of footage that's been altered to look like similar scenes from the documentary is a technical marvel; they've gotten the lighting and the picture to look just like the grainy, cheap-video feel of the real doc. That technique is used sparingly and wisely, as a reminder of how moments that are now famous (among true crime types) are part of a much larger picture.

There's a lot to like about this series. Firth (with his generally British and stoic air) is much more convincing than I expected as the fidgety Peterson. And who doesn't like Juliette Binoche? But there was something about this that held me at a distance, because of the very restlessness — the trial, the marriage, the kids, the investigation, the filmmaking, all swirling faster and faster — that seems to be Campos's intent. It leaves me wondering whether this feeling is fatigue, and thus, whether it is about this series at all. If I hadn't seen so many documentary-to-scripted series, would I be as weary when I see an on-screen indication that we are flashing back to The Happy Times before The Bad Thing happened? I don't know.

Just another entry in the big long list of mysteries without resolutions. 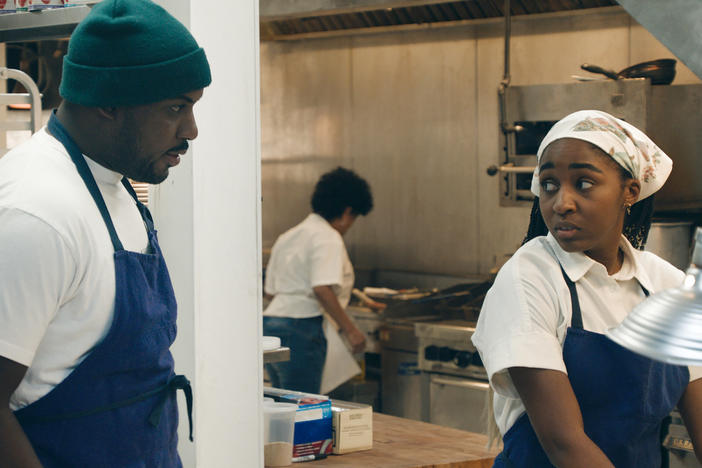 What to watch, read and listen to this weekend

What to watch, read and listen to this weekend 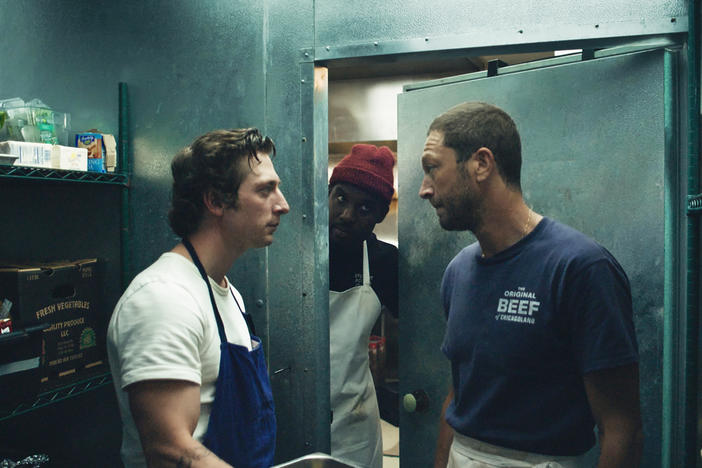 FX's 'The Bear': A funny, raw, real drama in a restaurant kitchen

Jeremy Allen White plays a wunderkind chef who returns to his family's restaurant after a tragedy. The Bear knows exactly what it's doing, and it does it well.