Abortion rights protests erupt in Georgia and beyond. It could be a prelude of more to come 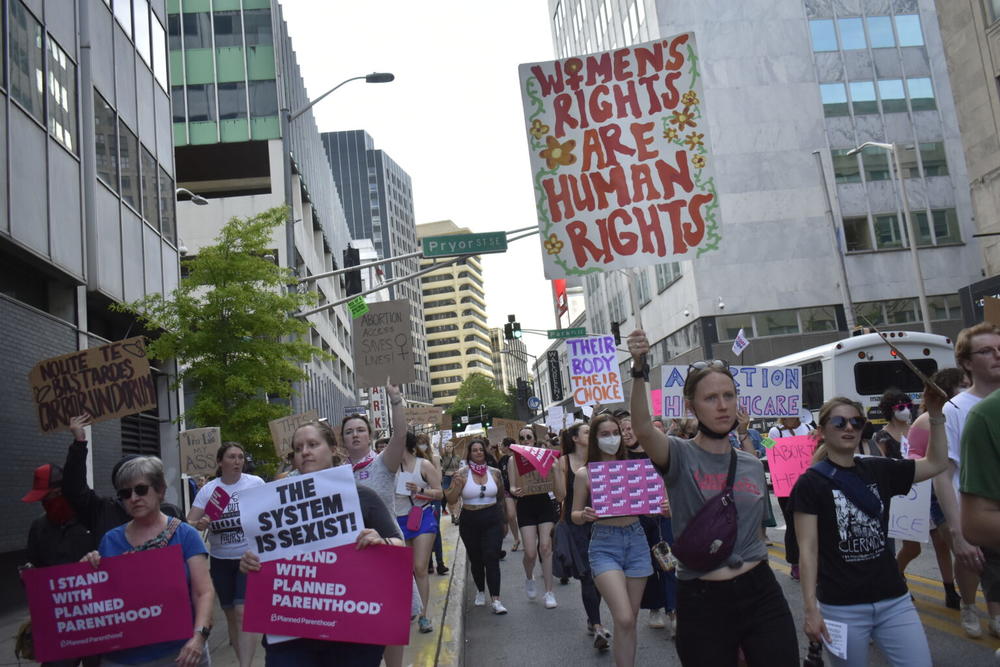 The streets of downtown Atlanta echoed with the now-familiar sounds of protest chants Tuesday as hundreds marched to demonstrate after a leaked draft U.S. Supreme Court opinion which, if given final approval, would severely limit abortion access in the majority of states, including Georgia.

“Numbers were big today because there was huge outrage at this draft decision put together by the Supreme Court and the egregious logic that it was using anti-woman, anti-people logic, saying that there was no constitutional basis for Roe to even have passed,” said Monica Johnson, an organizer with the Party for Socialism and Liberation, which organized the protest. “We knew that people were angry about this.”

The mood was similar to the George Floyd protests of the summer of 2020, as a diverse group of mostly young people marched from Centennial Olympic Park to the state Capitol and back chanting slogans like “No justice, no peace” and “When women’s rights are under attack, what do we do? Stand up, fight back.” 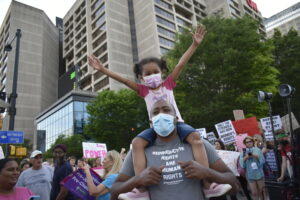 Demonstrators gather at Centennial Olympic Park before marching to the Capitol.

Johnson said the rally marks the beginning of a renewed protest movement.

“Since the end of 2020, the presidential election, we definitely saw the enormous numbers that were in the summer 2020 go down,” she said. “Things have been at a different level since then, this is one of the bigger rallies I’ve seen in recent months. I believe it speaks to people understanding what’s happening around them, that more and more rights are being chipped away at and knowing that we need to fight. So I think it’s going to continue to get bigger.”

The protesters vowed to target anti-abortion lawmakers in the coming election, but they showed little love for Democrats, with speakers castigating the party for not codifying abortion rights into law during the last five decades and the crowd breaking into chants of “Joe, do your job,” referring to President Joe Biden. 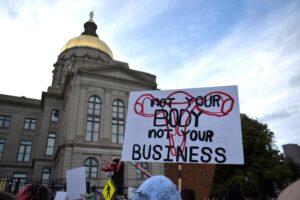 Hundreds gathered at the state Capitol Tuesday to protest an end to Roe v. Wade.

Ev McGovern, an international relations major at the women’s private Agnes Scott College, said they were working on a final essay for an important class, but when they heard about the protest, they knew they had to ask for an extension and join in.

“I’ve been out here since March for our Lives when I was in high school,” they said. “And I think that’s something that I’ve noticed is a shift in how people that are rallying are starting to realize that the entire system is corrupt, and it’s not just one party or the other. Obviously, voting is really, crucially important, but I think that this will get as big as the other (protests) have. If the momentum keeps with the movement, if the Supreme Court decides to follow through, I think it will. But I appreciate that within these rallies, people are starting to notice it’s a systemic issue and not a party issue.”

Protests at the ballot box

The leaked opinion came as voters had already started casting early ballots for the May primary election, and voters at polling places around the metro Atlanta area had the news on their minds as they lined up at Georgia precincts.

Some, like Gabriella Estevez, said they were fired up to vote for candidates who support abortion rights. Estevez said she was shocked to hear about the looming chance of the Supreme Court overturning U.S. abortion law and now it’s even more pressing for women to use the power of the vote to stand up for their rights.

“This is such a polarizing topic that few people don’t have a strong opinion on so I absolutely think it will galvanize more people to come out and vote,” she said Tuesday afternoon after voting at the DeKalb Voter Registration & Elections Office. “I’m not sure if people who support this understand how it might come back to bite them in elections.”

Others, like JoAnne Blake, are thankful for the news. Blake said she has long held the belief that there are better options than abortion, such as counseling and services to support women during and after pregnancy.

Ultimately, she hopes that more like-minded individuals will begin to recognize that who they elect can determine the fate of important laws and politics.

“I didn’t expect this to come about in my lifetime, but always prayed for it,” said the 67-year-old. “Politics can be seedy but there is also a greater good that it can bring about.”

When you think of abortion protests in Georgia, you likely picture groups of people picketing outside clinics hoping to dissuade women from getting the procedure, and the state has a long history of anti-abortion protests.

Hundreds of anti-abortion protesters gathered for the 1988 Democratic National Convention were arrested for trespassing and other violations, including six who entered an Atlanta clinic.

The year before the Georgia Legislature passed the so-called heartbeat bill, protesters in Macon carrying signs such as “Abortion kills children” were able to successfully prevent an abortion clinic from opening. Rather, the building was sold to one of the protest organizers, the Kolbe Center, which provides free medical services to women with unplanned pregnancies according to Catholic teachings.

Rhonda Cook, a retiree who volunteers as an escort at Atlanta-area women’s reproductive health centers, said she worries publicity about the Supreme Court’s draft opinion will inflame anti-abortion protesters.

Cook said she’s already often confronted by anti-abortion activists like convicted church arsonist Jason Cantrel who seem to have an inside track on when clinics will be open.

“It’s just sad,” Cook said Tuesday as news of the draft court opinion spread. “A woman showed up two shifts ago and she said ‘I don’t want to do this.’ And I said just don’t do it and she left.”

Cook said the woman felt pressured by her boyfriend to get an abortion. She already had two children and said she couldn’t afford another.

Cook said police are often called to the women’s clinics where she volunteers, sometimes to tamp down conflicts between anti-abortion and abortion rights protesters.

The National Abortion Federation reports Georgia is home to six reproductive health clinics around Atlanta and one each in Augusta, Columbus and Savannah. 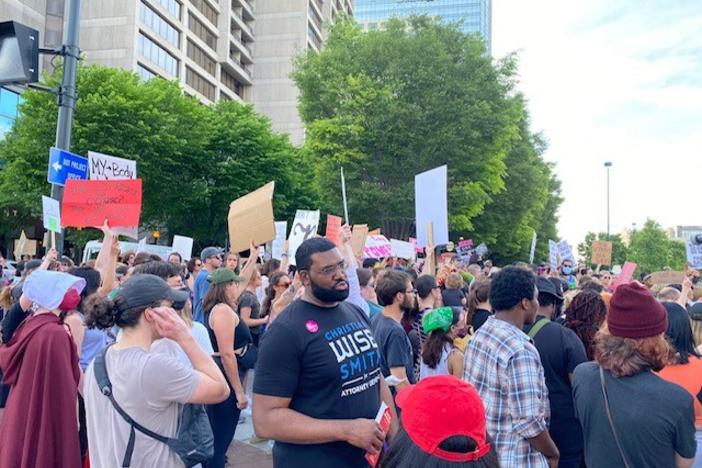 A leaked draft of the U.S. Supreme Court’s highly anticipated ruling on abortion rights suggests the nation’s highest court could soon overturn Roe v. Wade and unleash states like Georgia to severely restrict access to the procedure. The unofficial ruling, which was obtained by Politico, became public a couple months before a decision was expected, immediately jolting Georgia politics as early voting starts for this year’s primary election. 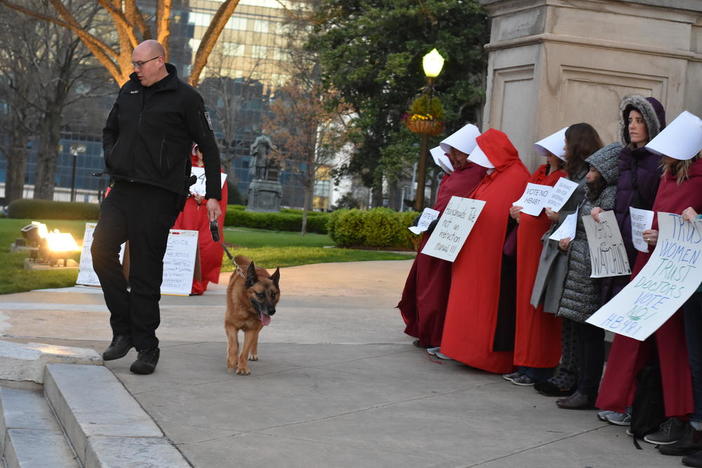 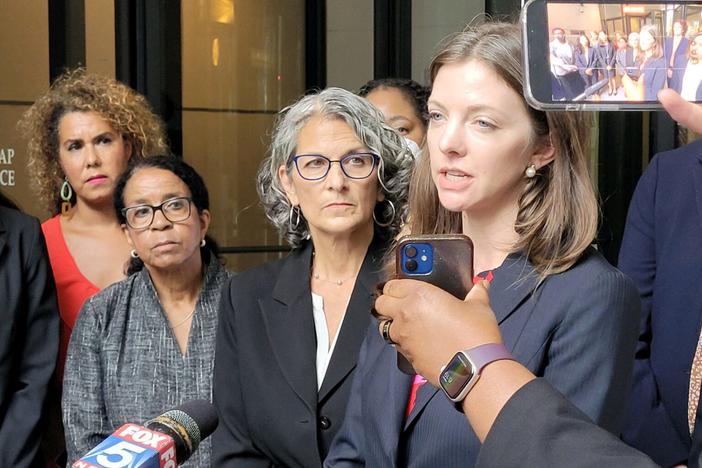