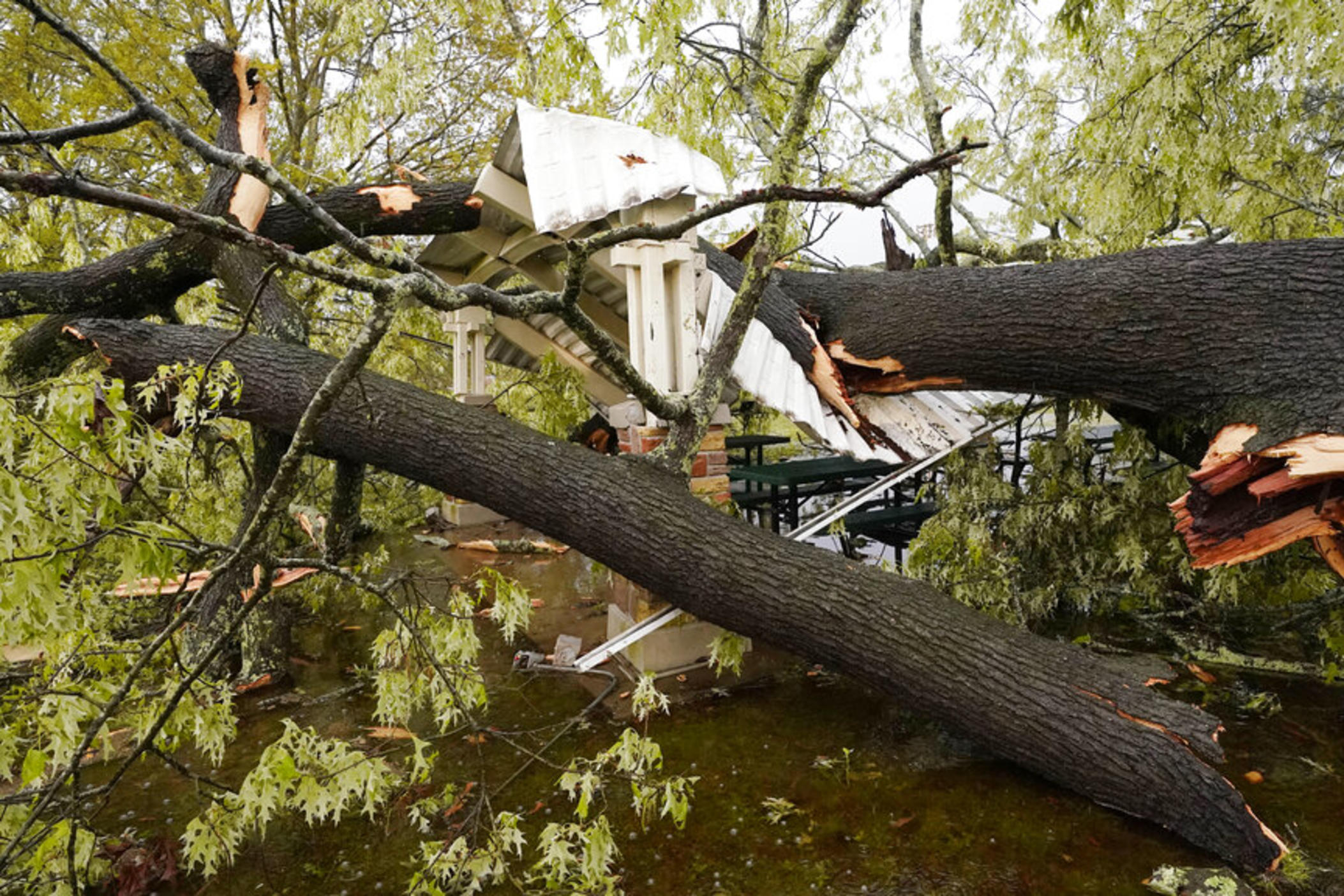 Caption
A tree toppled by the storm rests on the roof of a gazebo at Battlefield Park in Jackson, Miss., following a severe weather outbreak in the state, Wednesday, March 30, 2022. About a dozen trees were felled by the storm in the park.
Credit: AP Photo/Rogelio V. Solis

A line of severe storms packing isolated tornadoes and high winds ripped across the Deep South overnight killing at least two in the Florida Panhandle, toppling trees and power lines and leaving homes and businesses damaged as the vast weather front raced across several states.

In Florida, the Washington County Sheriff's Office said Thursday morning that two were killed and two injured when a tornado touched down in the western Florida Panhandle.

The sheriff's office also said the tornado destroyed homes there. Its Facebook page showed at least one home that was obliterated, as well as trees down on another home. No other details were immediately available.

About 185,000 customers were without electricity Thursday morning in the wake of the storm along a band of states: Mississippi, Alabama, Tennessee, Kentucky, Indiana, Ohio and Michigan, according to poweroutage.us, which tracks utilities.

The worst of the weather Thursday morning appeared to be at the southern end of the storm front, which was expected to bring heavy rain and high winds all along the U.S. East Coast later in the day. Much of the Florida Panhandle was under a tornado watch, according to the National Weather Service in Tallahassee.

No deaths had been reported from the storms as of early Thursday, authorities said. But widespread damage was reported in the Jackson, Tennessee, area as a tornado warning was in effect. “Significant damage” occurred to a nursing home near Jackson-Madison County General Hospital and the Madison County Sheriff’s Office in Jackson, said Madison County Emergency Management Director Jason Moore.

In Nashville, Tennessee, paneling fell five stories from the side of a downtown hotel Wednesday evening and onto the roof of a building below. The fire department warned that debris could become airborne as high winds continued, and some hotel guests were moved to other parts of the building due to concerns the roof would become unstable. No injuries were immediately associated with the collapse.

One person was hurt when a storm hit the University of Montevallo campus south of Birmingham, damaging a dormitory, officials said, and a woman was injured when a manufactured home rolled over in rural Bibb County. A school bus was flipped at a high school in south Alabama, and part of the roof was missing from a church in northwest Alabama.

Elsewhere, a warehouse roof collapsed as the storms moved through Southaven, Mississippi, near Memphis, police said. The building had been evacuated and no injuries were reported.

The Mississippi Senate suspended its work Wednesday as weather sirens blared during a tornado watch in downtown Jackson. Some employees took shelter in the Capitol basement. 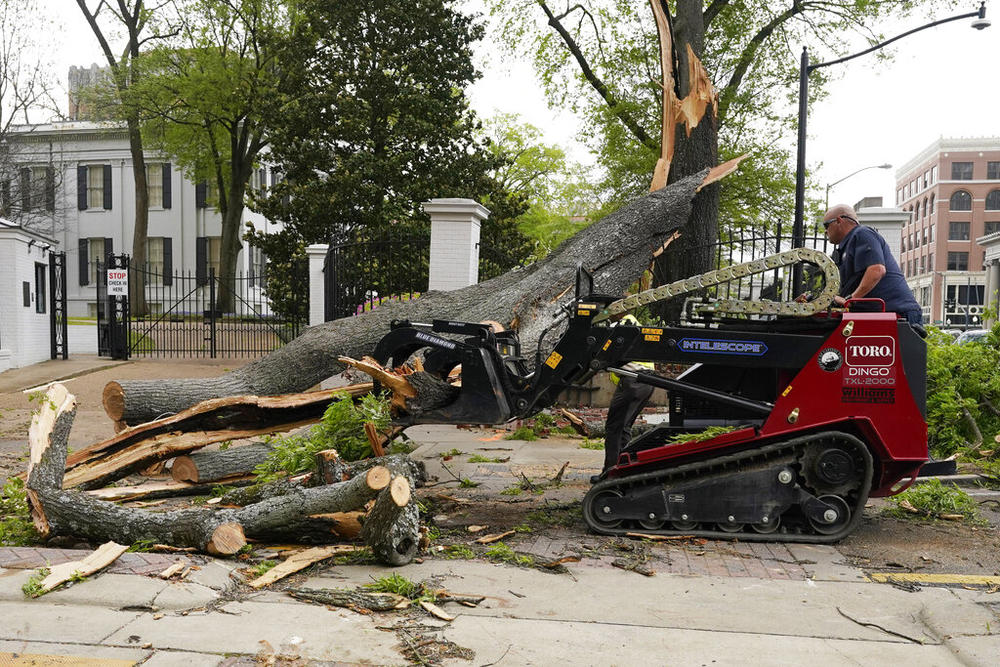 A state grounds engineer uses a mini skid steer to remove some of the limbs and trunk from this downed tree that was felled by strong winds on the grounds of the Mississippi Governor's Mansion onto a main intersection of downtown Jackson, during an outbreak of severe weather in the state, Wednesday, March 30, 2022. A section of the security fence and the decorative brick wall was damaged by the tree.

Rander P. Adams said he and his wife, Janice Delores Adams, were in their home near downtown Jackson when severe weather blew through during a tornado warning Wednesday afternoon. He said their lights flashed and a large window exploded just feet from his wife as she tried to open their front door.

“The glass broke just as if someone threw a brick through it,” he said. “I advised her then, ‘Let’s go to the back of the house.’”

Adams said the storm toppled trees in a nearby park, and a large tree across the street from their house split in half. “We were blessed,” he said. “Instead of falling toward the house, it fell the other way.”

Sprouse said in a statement that one of those critically injured had improved and was in stable condition and the other five were released from a hospital.

“Our first responders have completed door-to-door searches, and we believe everyone has been accounted for,” Sprouse said.

The National Weather Service in Tulsa said Thursday that the tornado has been rated an EF-3, up from an initial assessment of EF-2, with wind speeds between 136-165 mph (219-265 kph). The tornado reached a peak speed of about 145 mph (233 kph) and 5 miles (8 kilometers) while on the ground for about eight minutes, according to the weather service.

A small tornado also touched down briefly on the eastern edge of Dallas, according to the National Weather Service in Fort Worth. The tornado struck just after 4:30 a.m. Wednesday near McClendon-Chisolm with top winds of about 100 mph (161 kph) and damaged homes, but no injuries were reported, according to the weather service.

The storms come a week after a tornado in a New Orleans-area neighborhood carved a path of destruction during the overnight hours and killed a man.

Strong winds in Louisiana overturned semitrailers, peeled the roof from a mobile home, sent a tree crashing into a home and knocked down power lines, according to weather service forecasters, who did not immediately confirm any tornadoes in the state.

Firefighters, meanwhile, have been trying to get handle on a wildfire spreading near Great Smoky Mountains National Park in Tennessee, amid mandatory evacuations as winds whipped up ahead of the approaching storm front.

The fire, which was not contained, had expanded to about 250 acres (more than 100 hectares) as of Wednesday afternoon. One person was injured, and a plume of smoke rose above one community not far from where 2016 wildfires ravaged the tourism town of Gatlinburg, killing 14 people and damaging or destroying about 2,500 buildings. 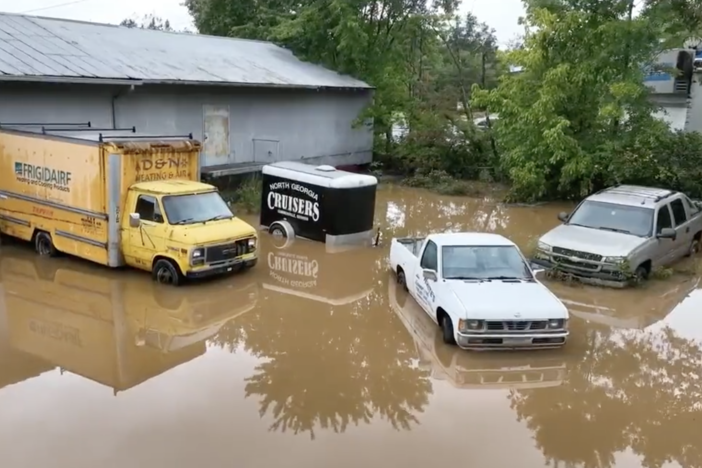 Parts of Georgia, Alabama, Tennessee, North Carolina, South Carolina, Kentucky, Virginia and West Virginia were under flash flood watches through Monday evening. Among the hardest-hit areas in this weekend's storm was northwest Georgia. 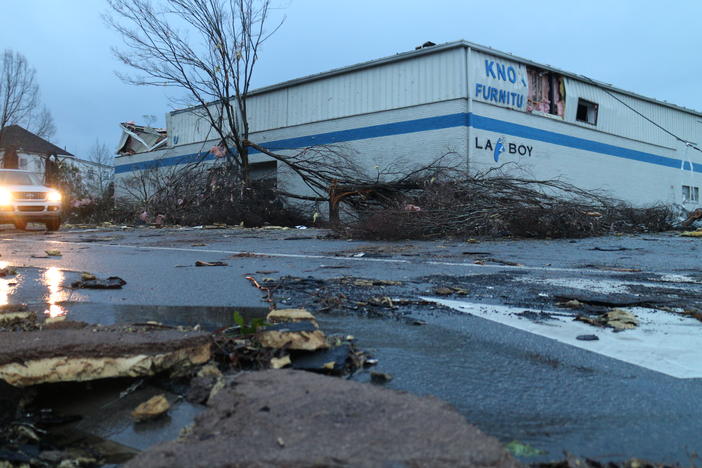 A Georgia town is picking up the pieces after an overnight tornado left one man dead and others injured. Coweta County officials blame the death on the storm that caused "catastrophic" damage in Newnan. 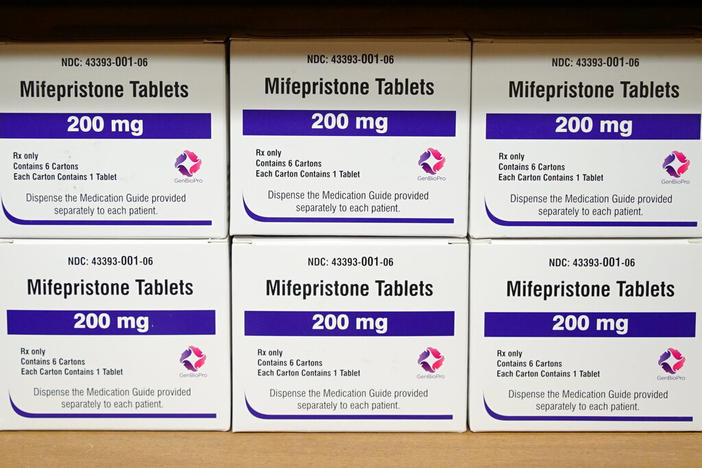