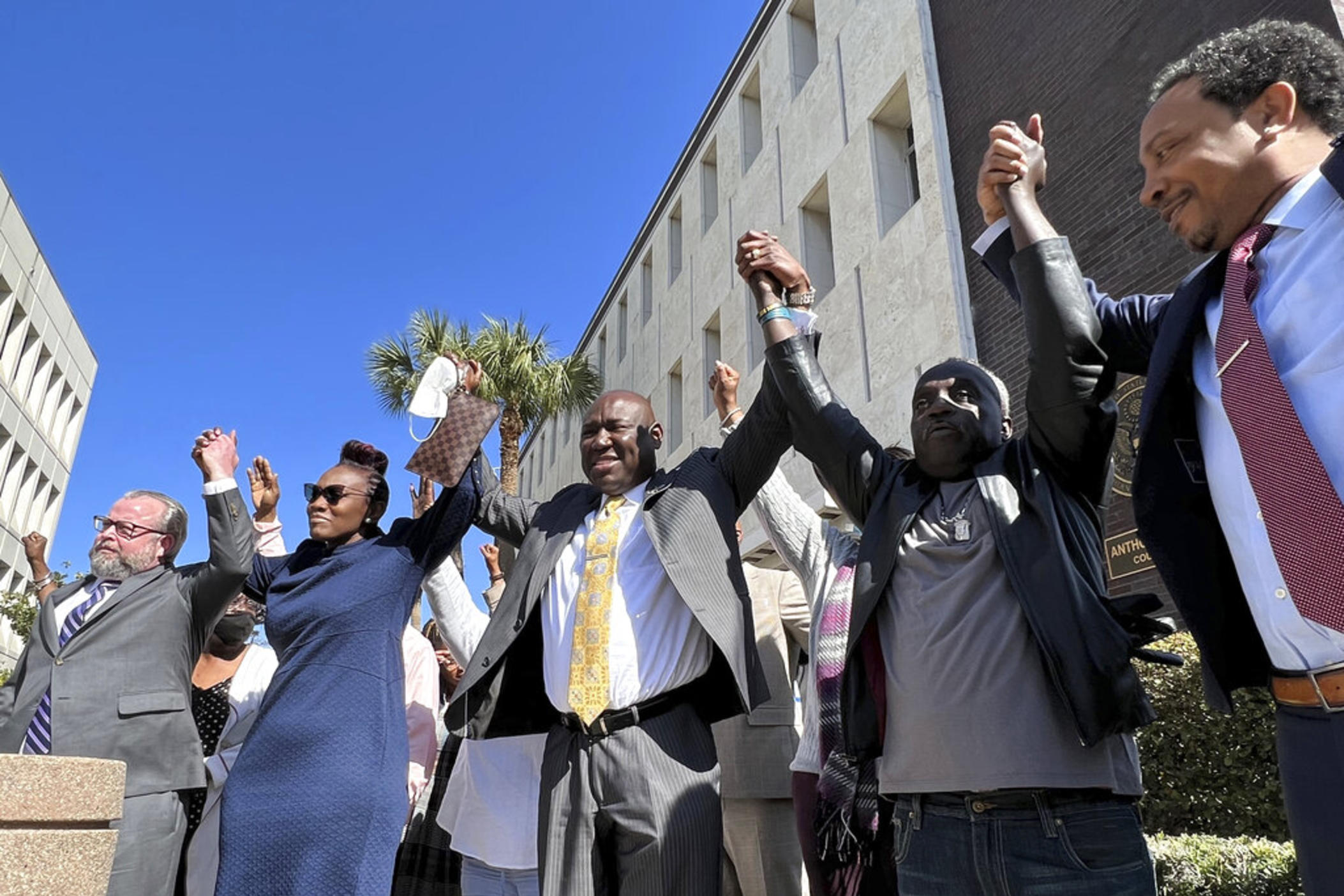 Caption
The family and attorneys of Ahmaud Arbery raise their arms in victory after all three men were found guilty of hates crimes at the federal courthouse in Brunswick, Ga., on Tuesday, Feb. 22, 2022. Greg McMichael, Travis McMichael and William “Roddie” Bryan, the three men convicted of murder in Arbery’s fatal shooting have been found guilty of federal hate crimes.
Credit: AP Photo/Lewis M. Levine

For the mother of Ahmaud Arbery, Tuesday's guilty verdict in the federal hate crimes trial against the three white men who murdered her son came as no surprise — but also no reason to stop pursuing accountability.

"I knew Ahmaud's hands was in this from the very beginning. The way Ahmaud left here, I knew we would get victory on the state level and in the federal level," said Wanda Cooper-Jones outside the Brunswick federal courthouse, moments after a jury returned guilty verdicts on all counts against Travis McMichael, Greg McMichael, and William 'Roddie' Bryan.

"I look at this as a milestone, another challenge that we've overcome," she said. "We still have the DA that we have to deal with, as well, but we've come a long way. You know we're not done."

She was referring to former Glynn County District Attorney Jackie Johnson, whose handling of the murder in the Satilla Shores neighborhood outside Brunswick led to allegations of an attempted cover-up, before criminal charges of violating her oath of office and hindering a law enforcement officer were filed against her..

As for the federal hate crimes trial — which ended just one day before the two-year anniversary of Arbery's murder — the jury of 12 deliberated for a total of about four hours, before finding that each defendant targeted and killed Arbery because of his race.

"[The jury] gave us the sense of a small victory," Cooper-Jones said. "But we as a family will never get victory because Ahmaud is gone forever." 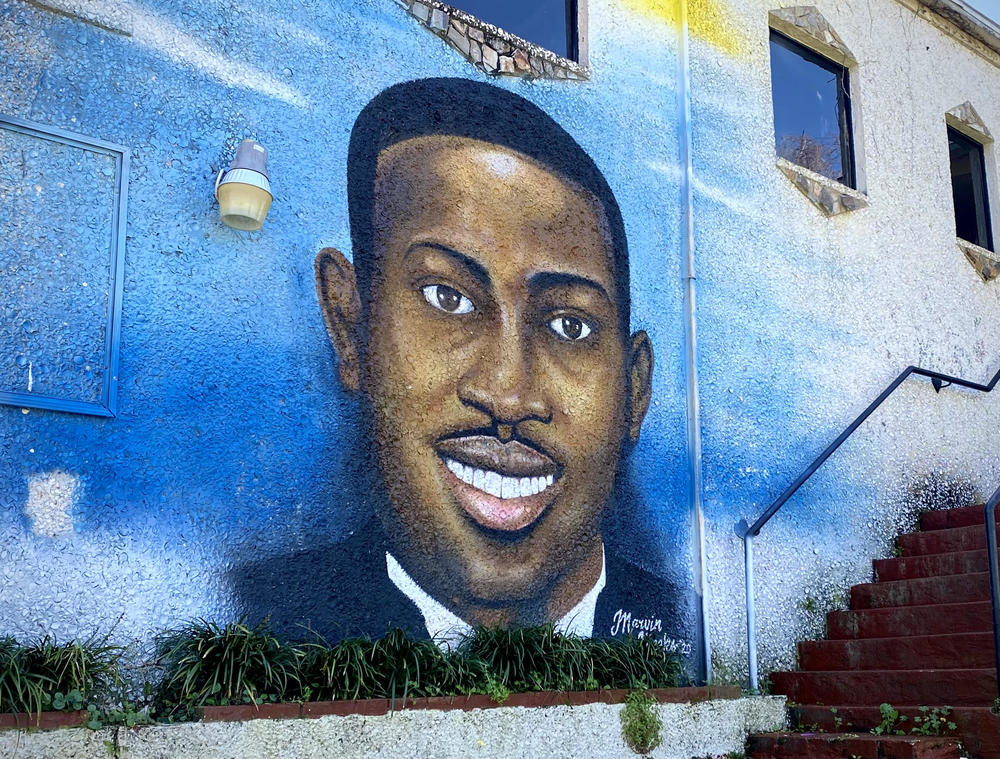 A mural in Brunswick of Ahmaud Arbery by artist Marvin Weeks

She was joined by Arbery's father, Marcus Arbery, who began by giving "all glory to God," before remembering his son.

"He loved his family," Arbery said. "He called us every day. If he had one word to tell you, guess what that was? 'I love you, Pops.' 'I love you, Mama.' He always told you that. Now each time [I] don't hear that, I'm struggling with that every day."

Arbery said that he would honor Ahmaud's memory on the two-year anniversary by running and working out, both of which he said his son loved to do.

"He said, 'Daddy, when you work out, you be in another world. If you got little problems in your world, you don't worry about them. Because working out take all that away from you.'"

Alongside Arbery's parents to herald the verdict was civil rights attorney Ben Crump, who said that a civil lawsuit filed on behalf of Cooper-Jones may soon be able to proceed, as criminal proceedings come to an end.

Crump said that George Floyd — whose family he represented — received criminal and civil justice, but that he believes "Ahmaud Arbery will be the most high-profile case in America to see that Black people, too, deserve full justice — not partial justice."

Shortly after thanking federal prosecutors for their work on the hate crimes case, Cooper-Jones criticized the Department of Justice for having offered in late January a plea deal to the McMichael's, which was quickly rejected by Judge Lisa Godbey Wood after she heard emotional testimony on Jan. 31 from Arbery's family, asking Wood to turn it down.

"That [plea deal is] not justice for Ahmaud," Cooper-Jones said. "What we got today, we wouldn't have gotten today, if it wasn't for the fight that the family put up on January the 31st."

The failed agreement came just weeks after prosecutors had approached Arbery's family with a proposed plea deal. Cooper-Jones said she begged them to not to offer any deals to the defendants: "[Prosecutors] didn't have a son that was lying in a cold grave. And they still didn't hear my cry. What the DOJ did today, they was made to do today."

"Ahmaud will continue to rest in peace, but he will now begin to rest in power," she said.

On Wednesday, Feb. 23, Georgia will commemorate Cooper-Jones's son with the first "Ahmaud Arbery Day" on the second anniversary of his death. Earlier this month, the Georgia General Assembly passed a resolution creating the day. Events are planned across the state, including a candlelight vigil and march through the Satilla Shores neighborhood. 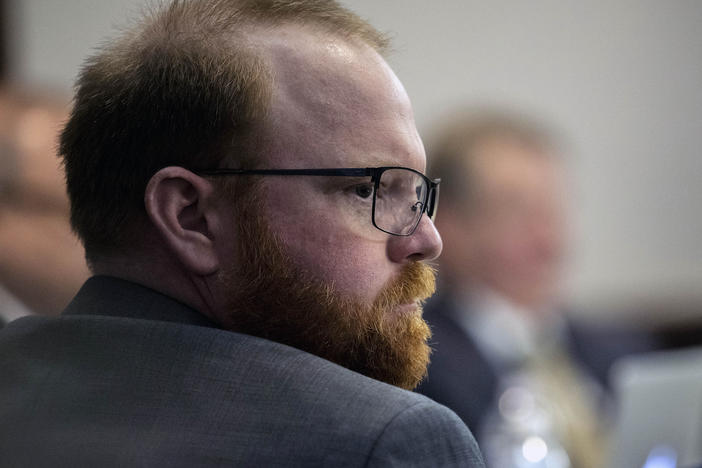