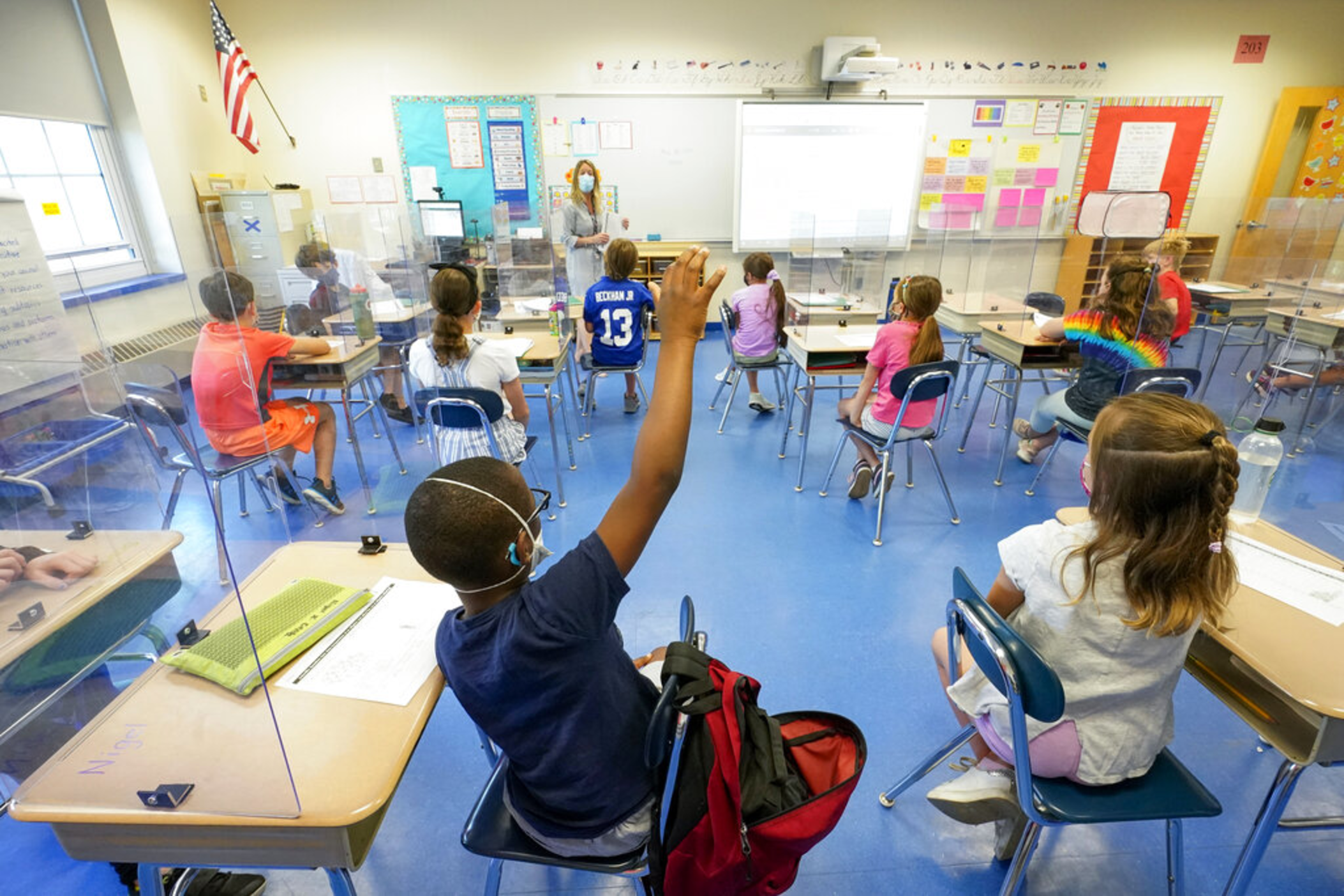 Caption
In this May 18, 2021, file photo, a teacher, center, and her third grade students wear face masks and are seated at proper social distancing spacing during as she conducts her class in Rye, N.Y.
Credit: AP Photo/Mary Altaffer

Teandra Storey is in the midst of a grueling rehearsal schedule for her high school’s rendition of A Raisin in the Sun.

The economics teacher is directing the play in honor of Black History Month at Grayson High School in Gwinnett County.

“What I really like about Raisin in the Sun is that it doesn't really fully focus on the relationship between African Americans and white Americans,” Storey said. “Really, the main focus of the play is how this African American male is navigating a world that — during that time period — that really didn't allow for them to have as many opportunities.”

The increased politicization — and polarization — of education and our nation’s history on race that is sweeping the nation has put teachers like Storey into an increasingly uncomfortable situation.

Across the state, teachers have found themselves caught in a conservative battle to ban “divisive topics” from classrooms, which Republican lawmakers define as a various list of ideas regarding race — bills that came from national conservative uproar over so-called “critical race theory” in classrooms.

Critical race theory is the idea that longstanding institutions of the United States are inherently racist.

GOP lawmakers have introduced an array of bills this session that target teaching about race in K-12 classrooms, although critical race theory isn’t actually taught in any Georgia schools.

During a conversation with reporters called by Republicans, Senate Majority Leader Mike Dugan asserted that the proposals are not the same as “critical race theory” bans being seen across the country.

But after two years on the front lines of partisan pandemic politics, teachers say they are exhausted and now on constant alert about what they can and can’t say in their classrooms.

One minute, they worried about vitriol over masks in school; the next, they’re worried about what law could get passed down from the General Assembly that puts them in the hot seat.

“Laws like this could make teachers question everything,” Storey said, who is in her 10th year of teaching. “Even if it's factual, it makes them question it.”

During his State of the State address this year, Gov. Brian Kemp pledged to “protect our students from divisive ideologies like critical race theory that pits kids against each other.”

Since then, GOP lawmakers — many with ties to the governor — have launched efforts to pass laws that limit conversations around race and others that give parents more say over what their kids are taught in school.

Still, committee hearings have been riddled with hours of testimony on how teachers feel mistrusted and scared to teach a curriculum that has been part of their lesson plans for years.

Jameson Brewer, assistant professor of social foundations of education at the University of North Georgia, said state policymakers are taking up an attack against teaching about race in classrooms that started under the Trump administration.

“I think that [to] anybody paying attention to what's happening in Georgia as well as across the nation,” Brewer said, “it seems that there's a fever pitch of anti-CRT bills.”

“It's really just anti-education," he said. "It's anti-critical thinking; it's anti-student.”

The conversations about what about race should be taught in K-12 classrooms — and how — has been brewing for months.

In June of last year, the Georgia School Board passed a resolution targeting race in classrooms that states that the board “believes the United States of America is not a racist country, and that the state of Georgia is not a racist state.”

Local school board meetings across Georgia have also been filled with angry parents who have alleged that teaching race in schools actually introduces racism and puts white students in an uncomfortable position.

This month, the Atlanta Board of Education passed a resolution unanimously opposing various bills regarding that limit teaching about race and censoring of classroom materials being reviewed by the state legislature.

Board Chairwoman Eshé Collins said she worries about the impact these bills will have on the students — especially in the Atlanta school system where more than 72% of students are Black.

“We know that those stories and what history tells us — and even the conversations — provide a level of critical thinking and analysis that we want our students and our children to be able to have,” Collins said.

“We want our teachers to fully feel free to teach — and to teach what is necessary for our students,” she said.

A Gwinnett County school board meeting was where Storey first heard about the concerns about “critical race theory” from white parents, which she calls “false hysteria.”

Storey is not only a teacher but helps curate social studies lessons in her county and for teachers across the country.

State Sen. Bo Hatchett, a Cornelia Republican and one of the governor’s floor leaders, is the sponsor of SB 377, which seeks to curb “divisive concepts” in the classroom.

“I want to make it clear that I do not want to inhibit the teaching of history, which is why there's explicit language in the bill that speaks to this intent,” Hatchett said. “Ultimately, we need to give parents a voice in classroom subject matter that strays outside the bounds of simply teaching historical facts. So we're banning specific divisive concepts in the teaching process.”

But the subjective nature of the language in the bills making their way through the General Assembly leaves a lot of room for interpretation.

Storey wonders how she can talk about economic disparities between Black and white Americans without addressing the discriminatory systems that have played into the problem.

Brent Andrews, a 21-year English teacher at Cedar Shoals High School in Clarke County, said that in his American literature class he asks students to probe the tenets of the “American Dream.”

“Is there current evidence that there's racial discrimination in our country?" he said. "Is there evidence that policies of the past are still negatively affecting people's lives today? And I think that these laws that are coming through now are intended to stymie that.”

Brewer, who teaches University of North Georgia undergraduates studying to become educators, said even his students are starting to think about what they can and can’t teach in their classrooms.

“It hampers teachers," he said. "It will cause teachers to engage in some self-censorship just because it's confusing. It's not clear what these bills necessarily restrict and what they don't.”

Teachers, like Andrews, said political battles over what happens in the classroom has long hindered the profession.

“I think for a long time, education has been damaged in a lot of ways by elected officials making laws about education,” he said.

But experts say the atmosphere for restrictive education bills in the legislature was primed by the pandemic, which took the debate over classroom politics to an all-time high.

The flurry of legislation being considered by lawmakers this session feels like “teachers are under attack,” she said.

“They are attacks on the integrity and professionalism of educators,” Morgan said. “And they are an attack on the partnership that should exist between parents and educators for our students.”

A key provision within education proposals are processes that would allow parents to request access to months of lesson plans and launch complaints against the curriculum that their child’s teacher has planned for the class.

Another bill being considered under the Gold Dome gives parents a pathway to protest “obscene” books and other materials they believe aren’t appropriate for teaching.

“It's just having a complete chilling impact on this discourse in the classroom, which is how children learn,” Morgan said. “A lot of these are things that educators and parents already were sharing, but now it's being turned into this political issue to divide parents and educators.”

House Rep. Will Wade, a Dawsonville Republican, is the sponsor of HB 1084, the House counterpart to SB 377 that bans “divisive concepts” around race.

During a committee hearing on the bill, Wade pushed back against the idea that legislation pits parents and teachers against each other.

But Brewer says the message is clear.

“Considering these bills, it is yet another manifestation — or artifact — that we don't trust teachers,” Brewer said. “We don't consider them to be professionals. We have very little regard for the work that they do … and that is damaging to the profession.”

It's a profession both Storey and her husband got into because, she said, it’s what they love to do.

“We do this because we love the profession and we love students,” she said. “And lawmakers make it hard for us to continue to love the thing that we went to school for.” 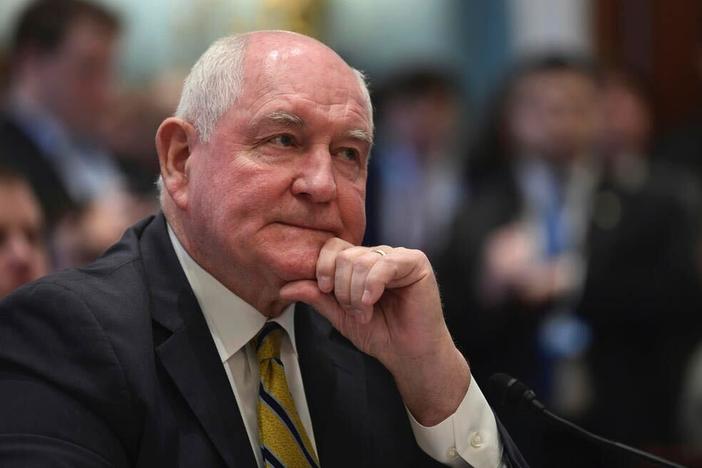 Georgia Today: How Sonny Perdue's ascent to chancellor went from implausible to inevitable

Students and faculty members around the state are reacting to news that Republican former governor Sonny Perdue may soon head up Georgia’s public university system. This week, officials on the Board of Regents announced Perdue is the sole finalist for the top job of chancellor. Opponents of the choice say Perdue's appointment would jeopardize academic freedom across the system’s 26 campuses.