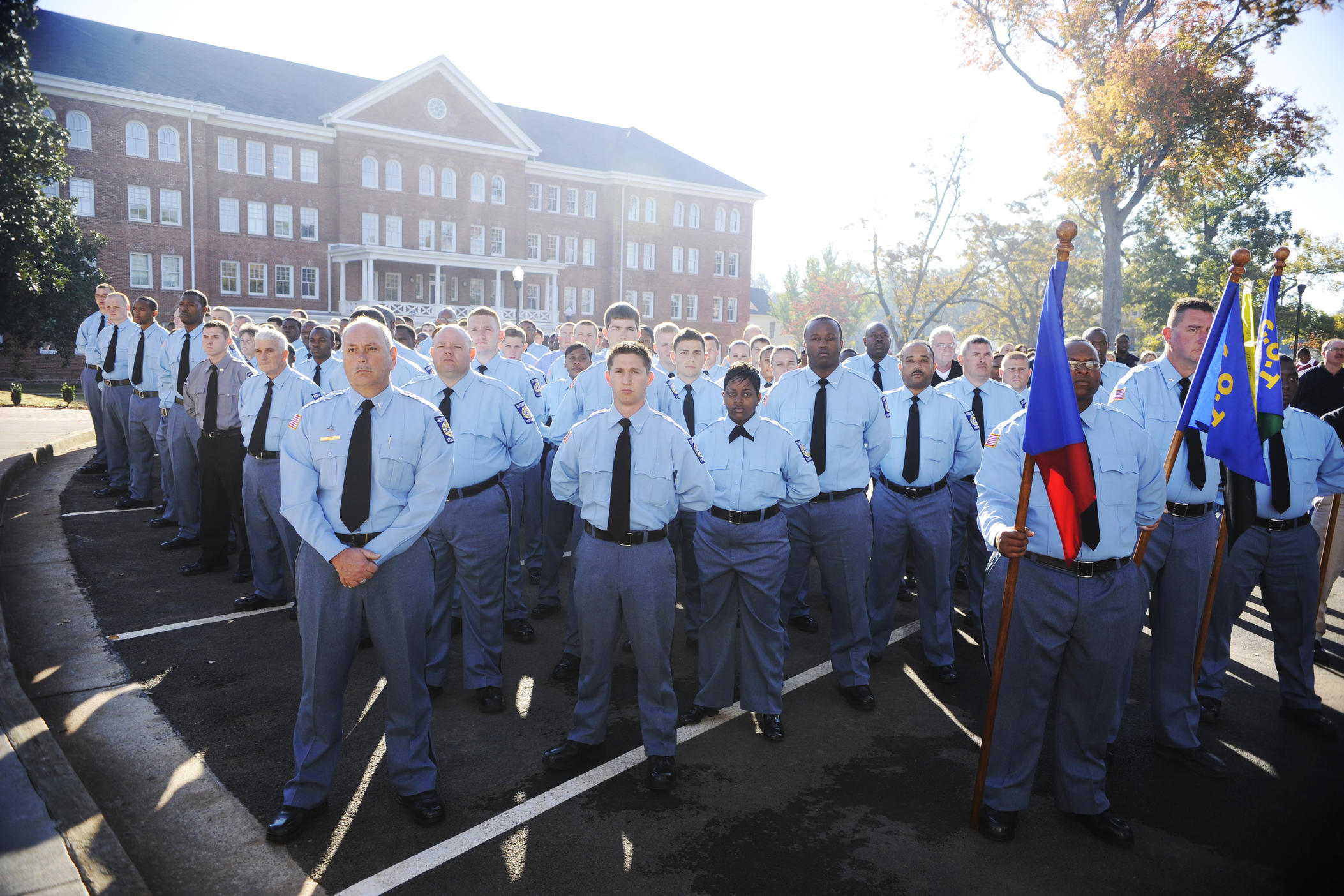 Caption
Georgia Department of Corrections cadets and trainers before the 2010 ribbon cutting for the department's training facility and offices in Forsyth. A labor strike of the incarcerated would come about month later. GDC lost over 2,000 correctional officers in the following year.
Credit: Grant Blankenship / GPB News

Back in September 2021, an ad hoc committee of members of the Georgia House of Representatives, all Democrats, wanted to know more about what was going on in Georgia prisons.

They listened to a string of people ranging from civil rights attorneys, prison reform advocates, the formerly incarcerated and, calling in to the hearing, a guard from Lee Arrendale State Prison in northeastern Georgia.

“At any given time, about how many people are on duty to supervise the whole prison?” asked Rep. Josh McLaurin, the leader of the session as he held up his phone to one of the tiny microphones sprouting from the conference table.

The guard’s voice came through the speakers in the ceiling.

“On a good day, six to seven officers,” the guard replied.

“And that's for how many people incarcerated?” McLaurin asked.

That’s one officer for every 200 prisoners. Compare that to the ratio of one guard for every 15 inmates the federal Bureau of Prisons treats as a baseline.

“When it comes to medical care, we lack the ability to get them into our medical facility due to the fact that we just we don't have any officers,” the guard added.

Even something as basic for hygiene as menstrual pads can’t reliably be shared with so few guards, he said.

Ratios like that likely repeat across Georgia’s correctional system. People with loved ones in prison blame the lack of guards for everything from lapses in medical care to the skyrocketing homicide and suicide rates in the prisons. Meanwhile, the U.S. Department of Justice is almost six months into what is expected to be a yearlong civil rights investigation of the Georgia Department of Corrections. From the start, understaffing at the state’s prisons has been seen as a possible symptom of a greater dysfunction.

And while staffing prisons at a safe level has always been a challenge, there’s one date that really signals a watershed in that struggle. 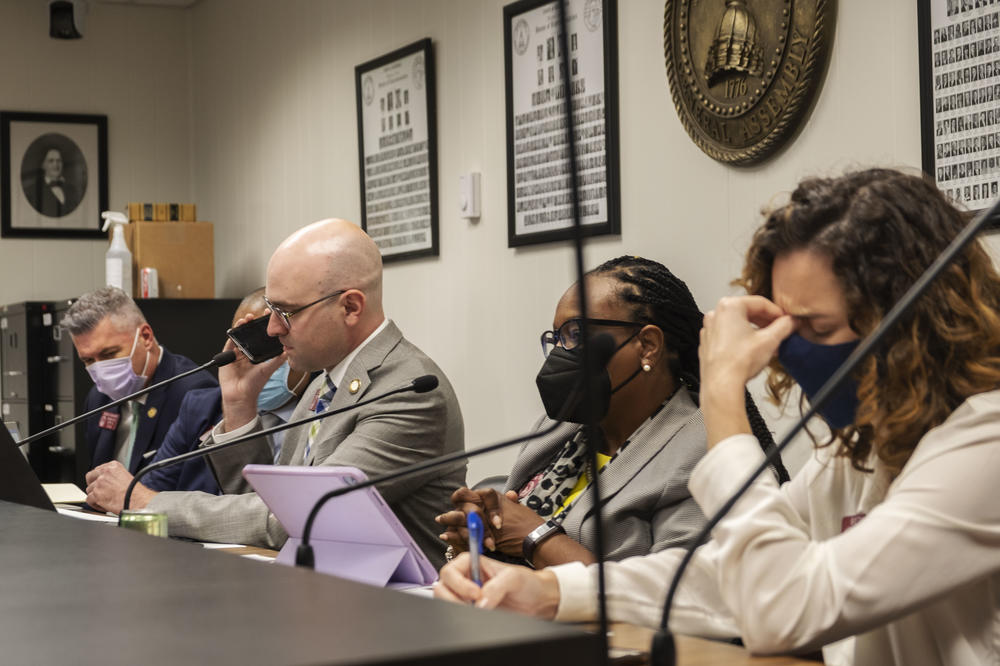 Georgia State House Member John McLaurin holds his phone to a conference room microphone so fellow members of an ad hoc committee of house members can hear the testimony of a correctional officer at Lee Arrendale State Prison in September 2021.

“I joined the Army on Aug. 24th of 1976,” he said during a conversation in Savannah, where he and his wife are now retired. “I was an Army Airborne Ranger, and I served 23 years before I retired from the Army.”

Though with full military retirement,  Morales was only in his 40s then. So he looked for something new. At a job fair, a recruiter sold him on a corrections job — that the discipline he learned in the military would translate well for running a prison.

“I joined the Georgia Department of Corrections and I was hired on July 15 of 1999,” he said.

It was about halfway through that second, 22-year-long career when Morales lived through another important date: Dec. 7, 2010.

Back then, Morales was warden at Coastal State Prison near Savannah.  He can still describe a perfect day there, at least for the people whose job it is to run the place.

“We start out the day by waking them up,” he said. “And they start cleaning the facility. And then around 9 o'clock, we conduct our inspections.”

Lockers are checked. Tidiness of bunks, too. It’s all part of the military-style discipline Morales said prisons need to function properly. And he said, when prisons work, it’s not only good for the staff, it’s good for the incarcerated.

For one thing, he said, it makes prison less violent. Then there are what may seem like more intangible things, at least in terms of day to day routine.

“We address their addictive needs — alcohol or drug or both,” Morales said.  “And we also provide them with educational opportunities.”

All are things that can help people leave prison and never come back.

Today, though, Morales said a perfect day in a Georgia prison, at least from a correctional officer’s perspective, is almost unheard of.  And here is why Morales has hung onto that date in December 2010.

It was a labor strike among the incarcerated, organized via text message from illegal, contraband cellphones.

“From one prison to the next, from one gang to the next gang,” Morales said.

Morales said the texting and planning went on for months, starting back in the summer of 2010.

The imprisoned would tell their guards to get ready for what was coming. Morales said not knowing actually what was coming kept staff on edge. But while some organizers may have threatened violence against their neighbors, the idea was a non-violent protest against prison staff across all Georgia correctional institutions.

Morales said the aim of the inmates' civil disobedience was to secure more humane living conditions. Stories in the Atlanta Journal-Constitution at the time said the same.

“And so they actually sat down on their bunks or stairway or whatever, and they refused all of our instructions,” he said.

This lasted for over a week. Organizers talked about a lawsuit if the strike didn’t get them what they wanted.

“So when that happened, it completely stopped Corrections.”

By the time the strike ground the prisons’ day-to-day routine to a halt, Morales said correctional officer morale was already very low.

“They were very unhappy,” he said.

For instance, there had already been forced furloughs — unpaid days off — as the state attempted to close a budget gap.

“Which turned out to be, you know, for some people, a car payment,” Morales said of the money lost in the furloughs.

“Some of these officers had to supplement their income by getting on what we used to call welfare.”

And so, Morales said, many walked away. 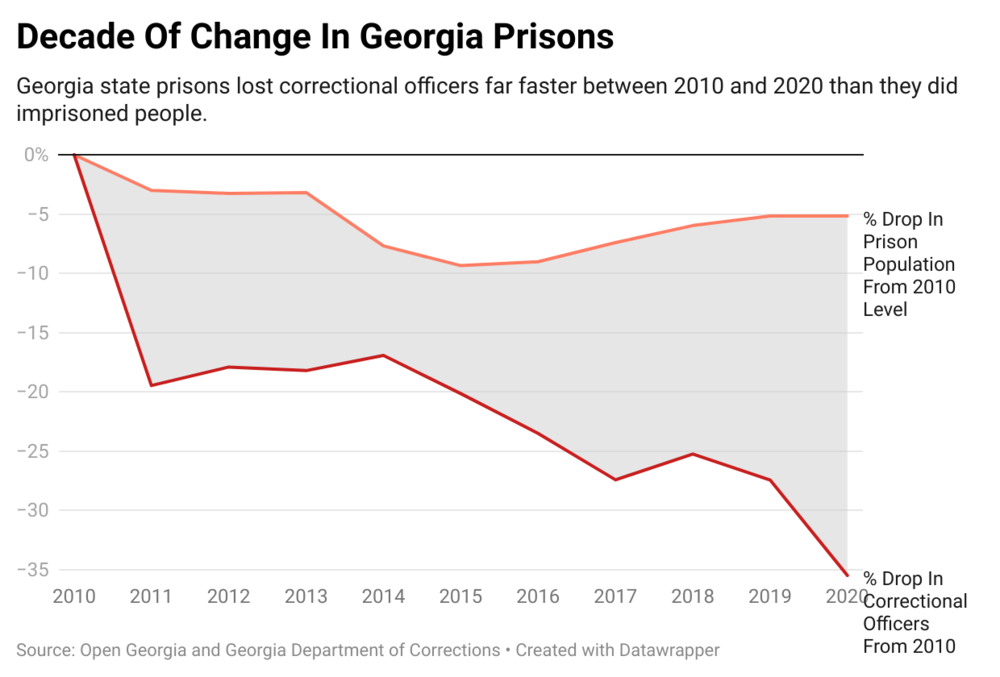 We’ll never know if the strike was truly the last straw, but the record one-year loss of employees after the labor strike — over 2,000 by 2011 — has not been repeated in state data since. It would take another nine years for Georgia Corrections staffing levels to fall to the level posted that year.

Meanwhile, the number of incarcerated people barely changed and the homicide rate inside Georgia prisons has climbed to four times the city of Atlanta’s.

Tamika Streater said she witnessed the dangers of too few guards for too many incarcerated people in her time last year as a correctional officer cadet.

As a cadet at Phillips State Prison, located in Gwinnett County, Streater said she was only allowed to shadow a more experienced correctional officer until she could go through the Department of Corrections training program for final certification. Department policy is that non-certified officers are not to supervise the incarcerated.

Streater said that rule got bent.

By the time Streater had keys put in her hand, she’d already seen enough to realize this was risky.

“About two days prior to that, I walked in to work and a riot broke out; a fight broke out,” she said. About half a dozen rival members of the same gang, she said, were going after each other.

The CERT team is made up of correctional officers specializing in emergency response. Streater said her certified mentor, a full-time officer, saw that the CERT team member needed help.

“She told me, ‘Come on, we've got to go down here,’” Streater remembered.

As a cadet, Streater knew to stay out of the fight. She kept to the side until other officers arrived and the brawl ended. The experience shook her up.

Streater didn’t succeed in making it past cadet to certified officer last year. She has reapplied to the Georgia Department Corrections and is trying again.

When Streater and people like her sign their life on the line, it’s for an average paycheck of  $35,000 a year. 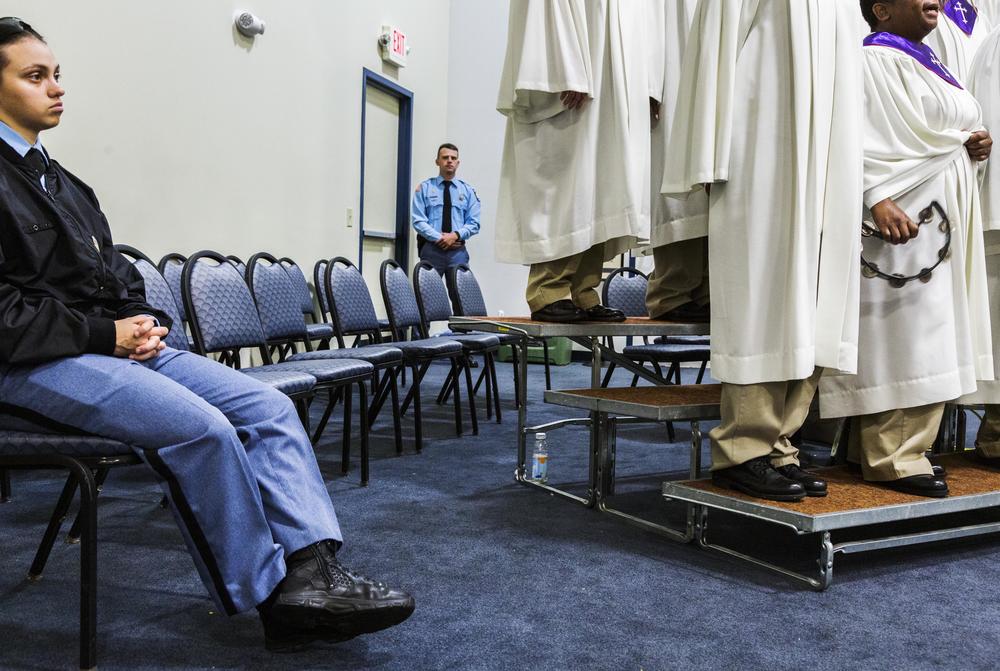 Guards from Lee Arrendale State Prison watch as the prison's choir performs in Macon in 2017 during the signing of prison reform legislation by then-Gov. Nathan Deal.

Morales said from a recruitment standpoint, that is a tough sell. At times he said it isn’t even enough to get the officers already on the payroll to show up and clock in, not even for jobs he called “priority posts.”

“We have to fill this post in order to maintain safety and security,” he said. “At times, out of a 27-man-and-woman shift, three people would show up.”

What would help? Morales goes right back to pay.

Neighboring states Alabama and Tennessee already pay their correctional officers close to that.

In 2021, Morales finished out his career as warden of the high security solitary confinement unit at Georgia Diagnostic Prison in Jackson, where the state also has its death row. There he saw one of the clearest examples of how people serving their prison sentences also suffer for lack of prison staffing.

A 2015 agreement made in federal court in the case Gumm v. Jacobs secured for prisoners in solitary at Georgia Diagnostic a minimum of three hours of sunlight a day, in something called a yard pen. That’s  a 12-foot by 20-foot enclosure, open to the sky.

But for that to happen, Morales said safe movement from solitary cells to the yard pens has to be assured. Understaffing means it just isn’t. So prisoners in solitary do not get to see the sun.

The best relief Morales could manage for people who sometimes spend years with no mind but their own for company was a 5-minute shower, a few times a week. 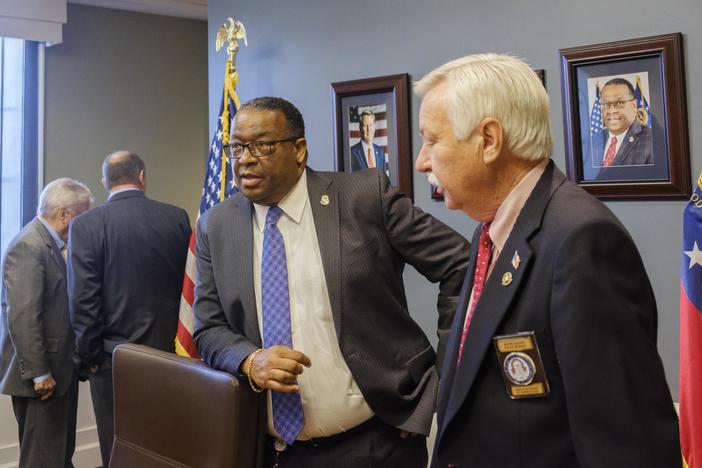 The U.S. Department of Justice has asked a federal judge to force Georgia’s Department of Corrections to comply with a wide-ranging subpoena issued as part of the agency's investigation of Georgia prison conditions. 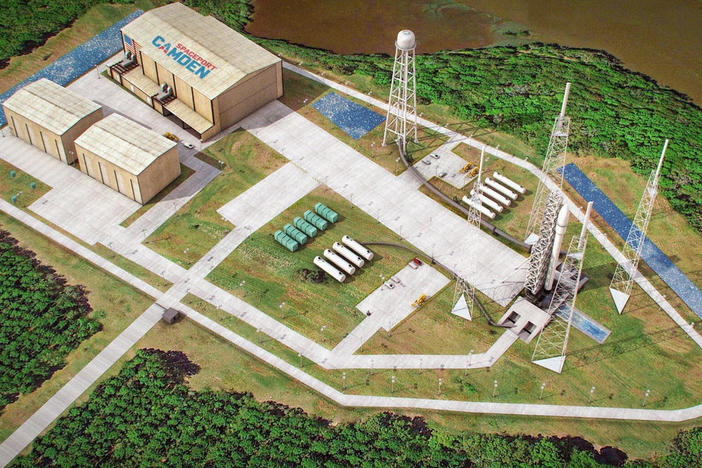 Opponents of a proposed launchpad for commercial rockets on the Georgia coast want a federal court to throw out the project's government license, saying the Federal Aviation Administration failed to adequately consider safety risks. 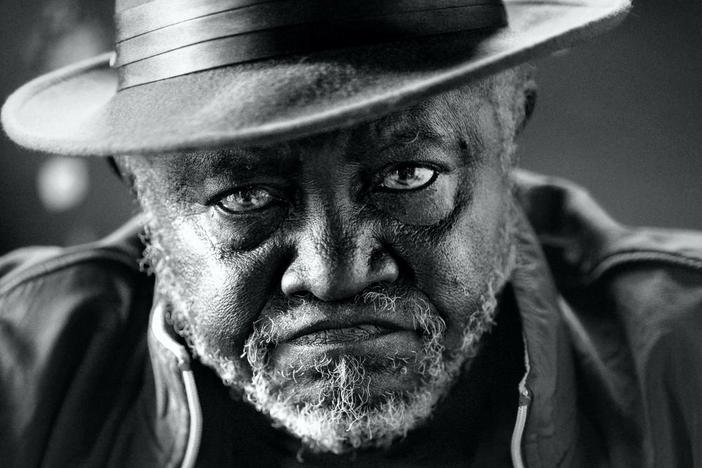