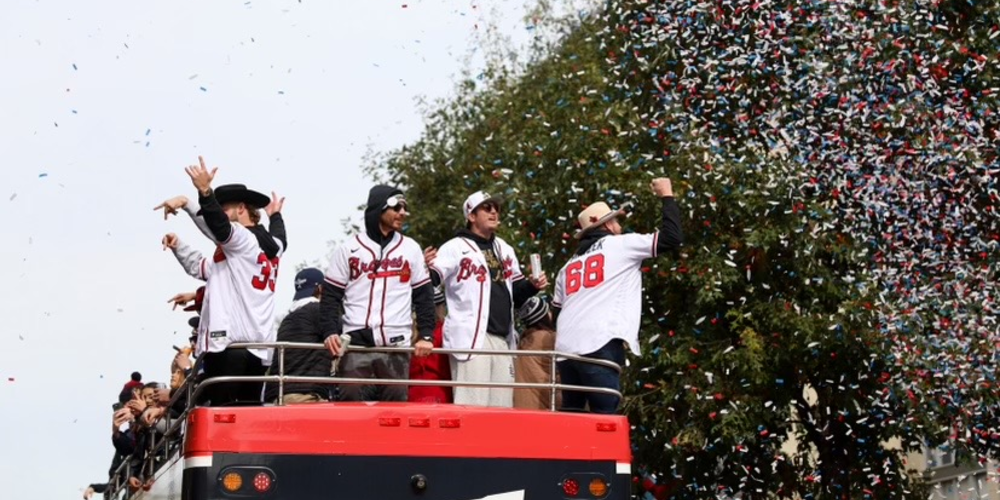 Caption
Braves players celebrate on top of a double decker bus in the midst of confetti and cheer.
Credit: Riley Bunch/GPB News 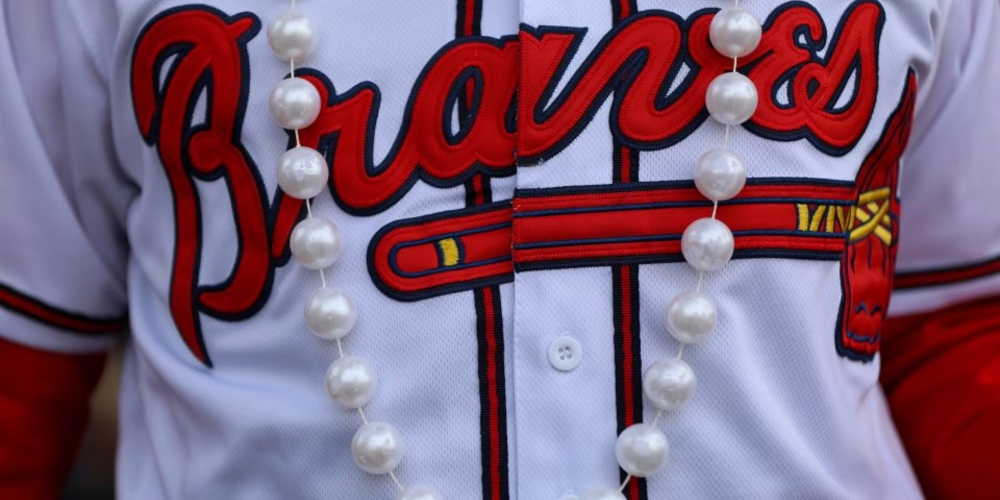 Caption
A Braves fan wears a white jersey and a pearl necklace at the celebration in Cobb County. Pearls became a symbol of the team's run to the title.
Credit: Riley Bunch/GPB News 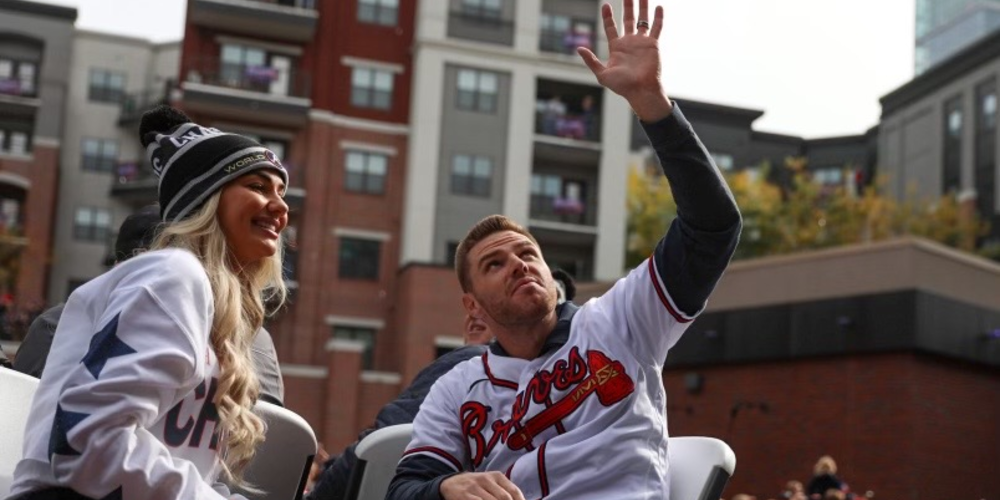 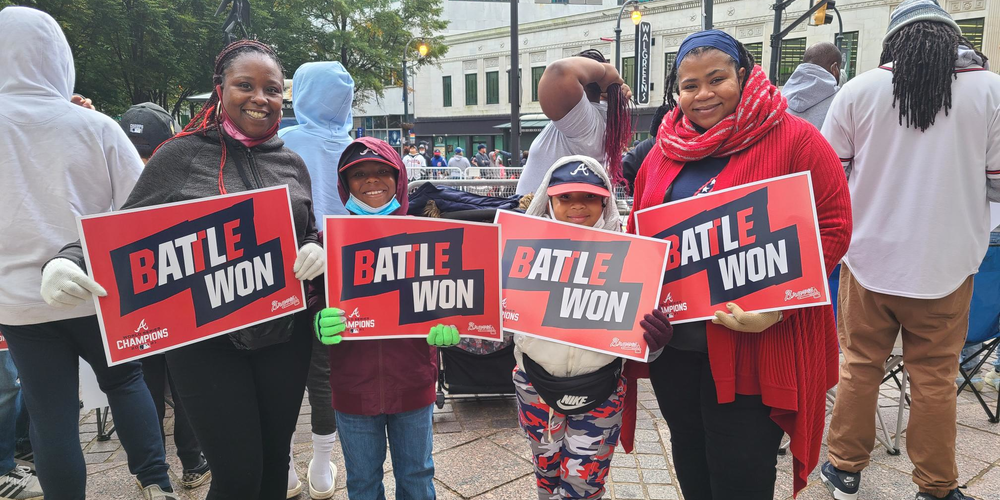 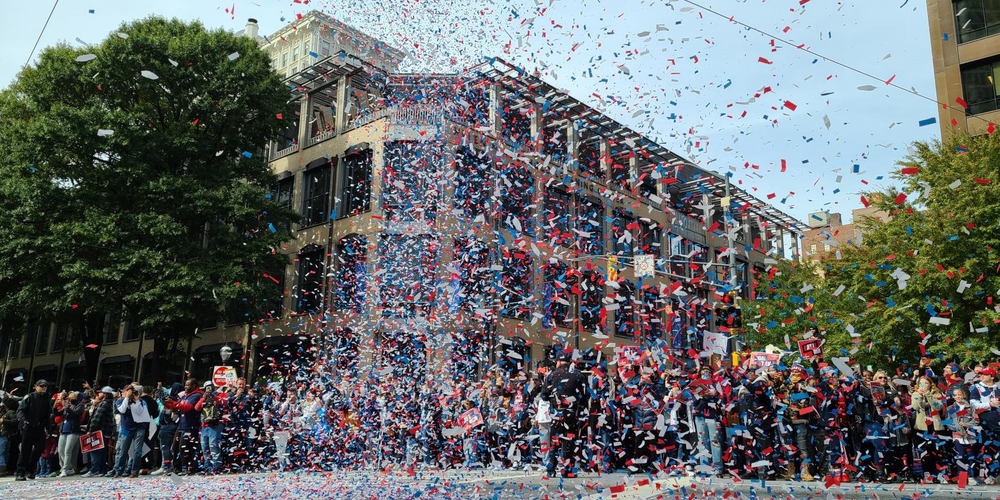 Caption
A blast of confetti falls on the streets of Atlanta in celebration of the Braves' World Series win.
Credit: Amanda Andrews/GPB News 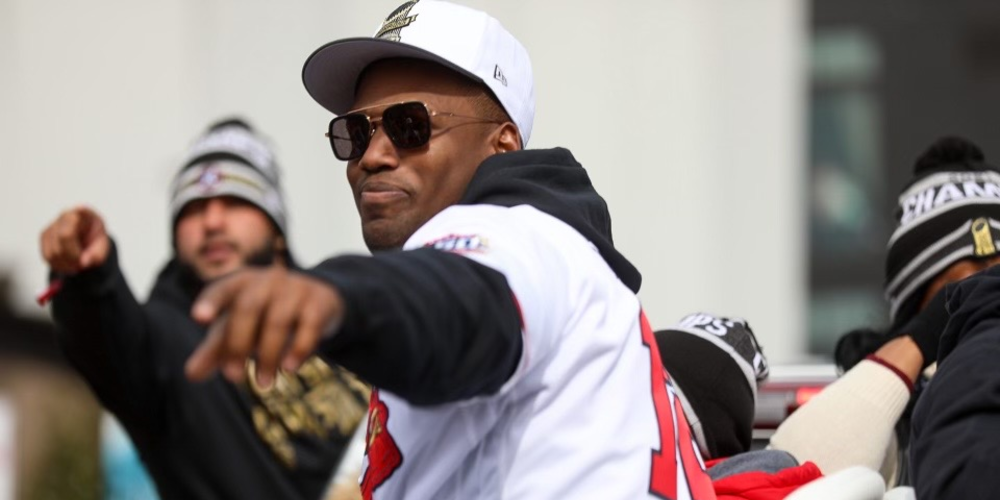 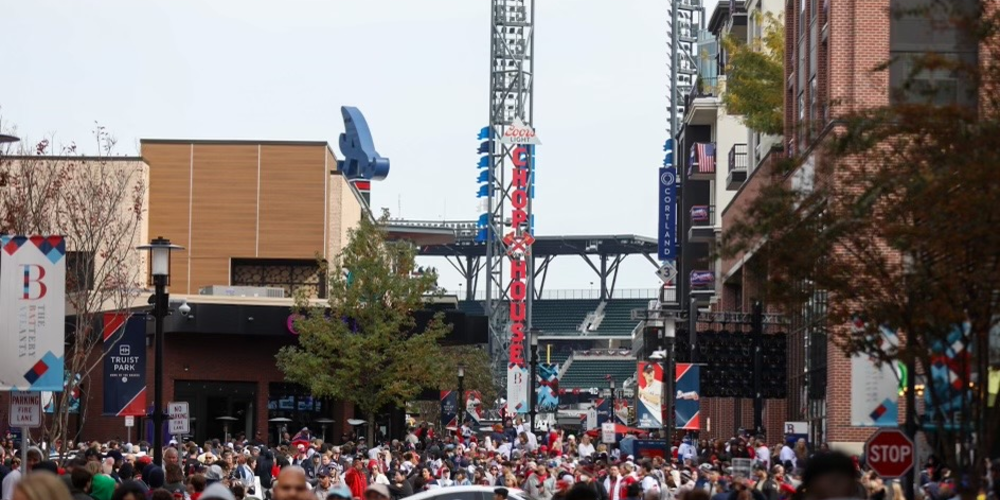 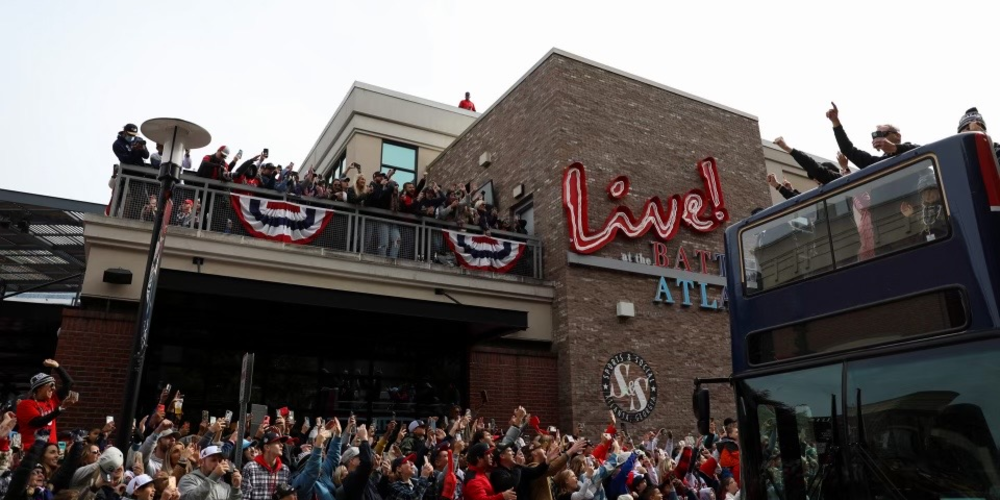 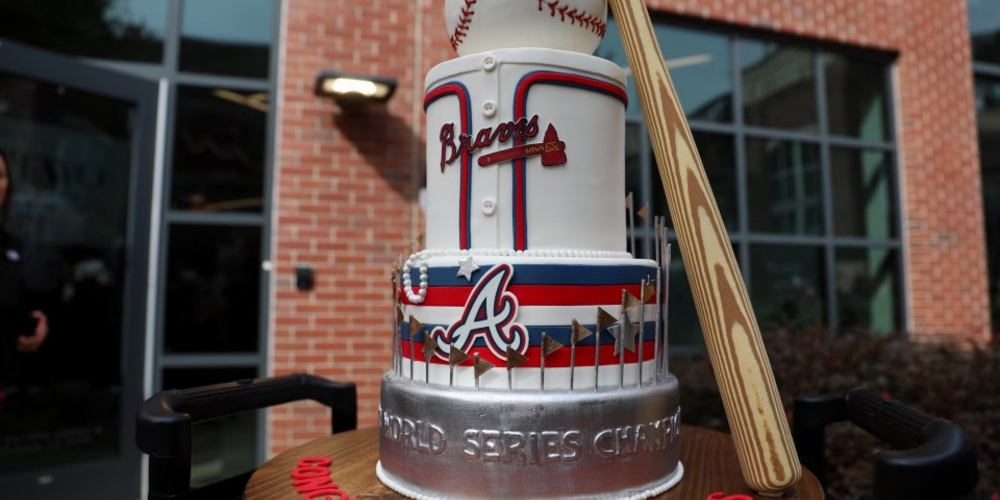 Caption
A Braves-themed cake complete with baseball and bat is on display to celebrate the World Series win.
Credit: Riley Bunch/GPB News 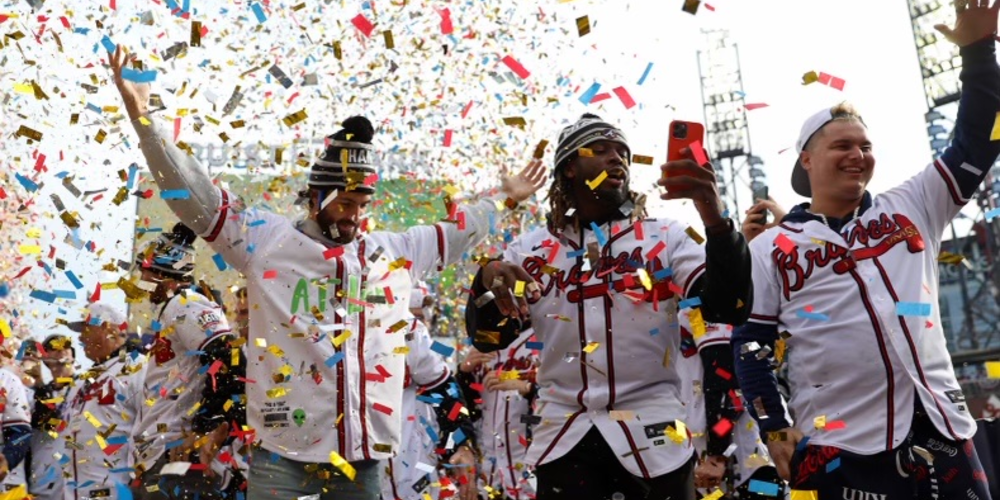 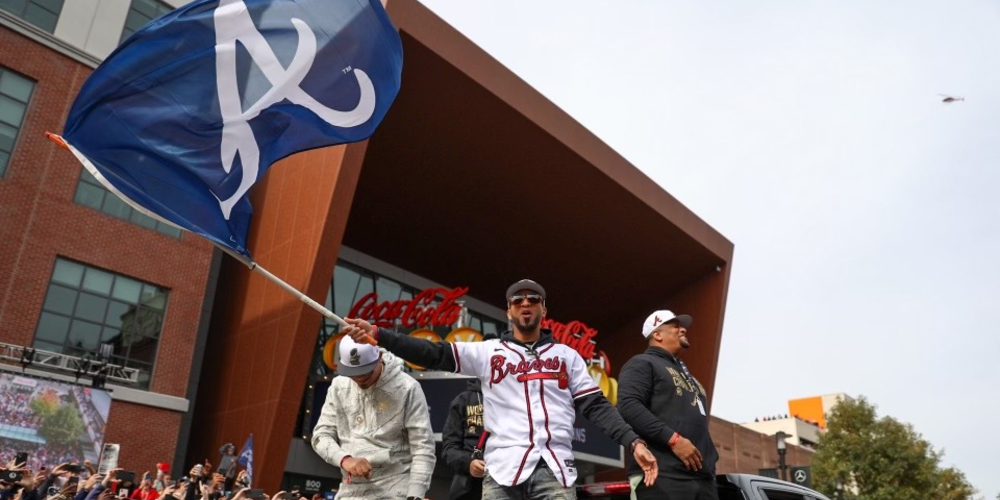 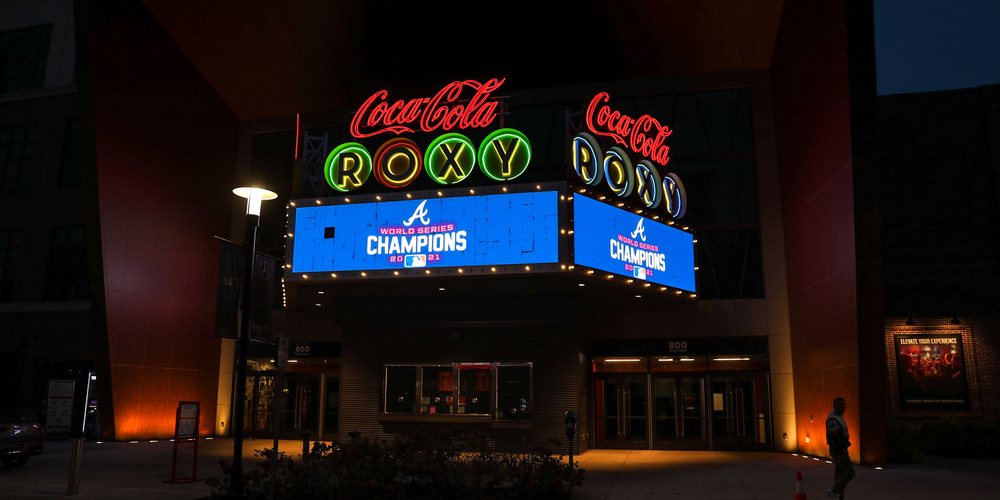 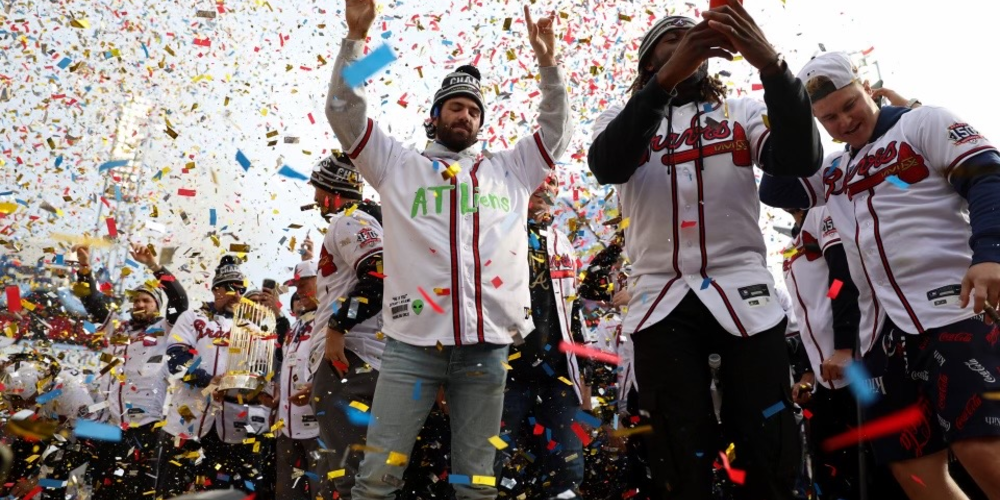 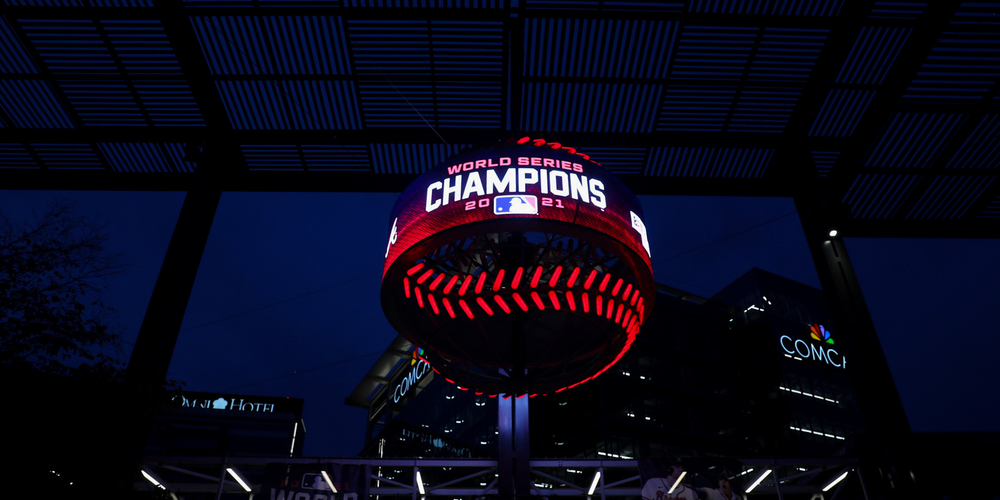 Caption
The calm before the storm of fans is shown early Friday morning in Cobb County.
Credit: Riley Bunch/GPB News 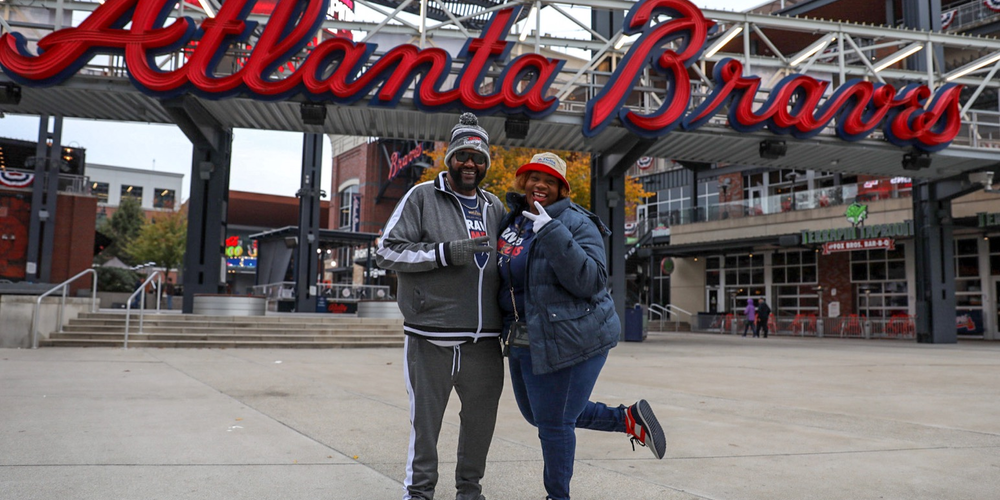 Caption
Lee and Shenelle Brown pose in front of the Atlanta Braves sign outside Truist Park. They were among the first fans to arrive early Friday, Nov. 5, 2021, to celebrate the team's World Series victory.
Credit: Riley Bunch/GPB News 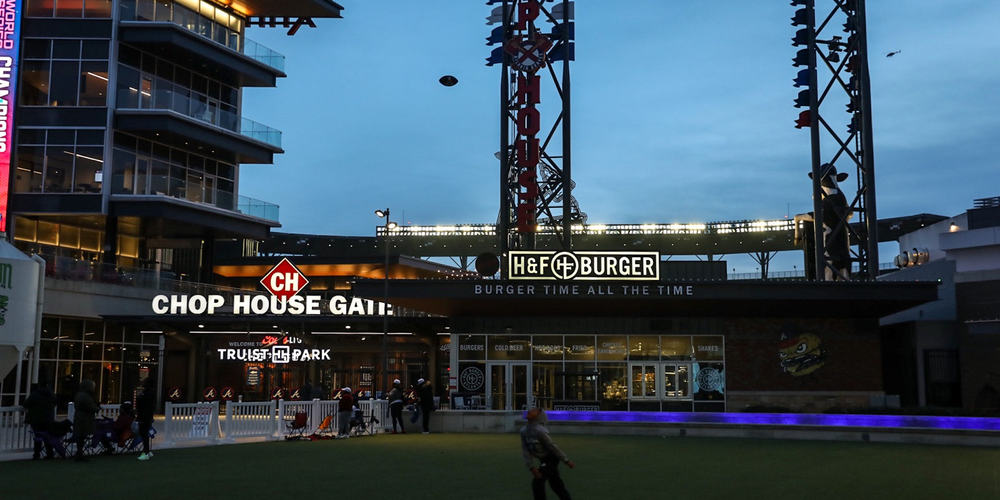 Caption
Before sunrise, fans began to gather in Cobb County to start the celebration and take pictures before the crowd arrives.
Credit: Riley Bunch/GPB News 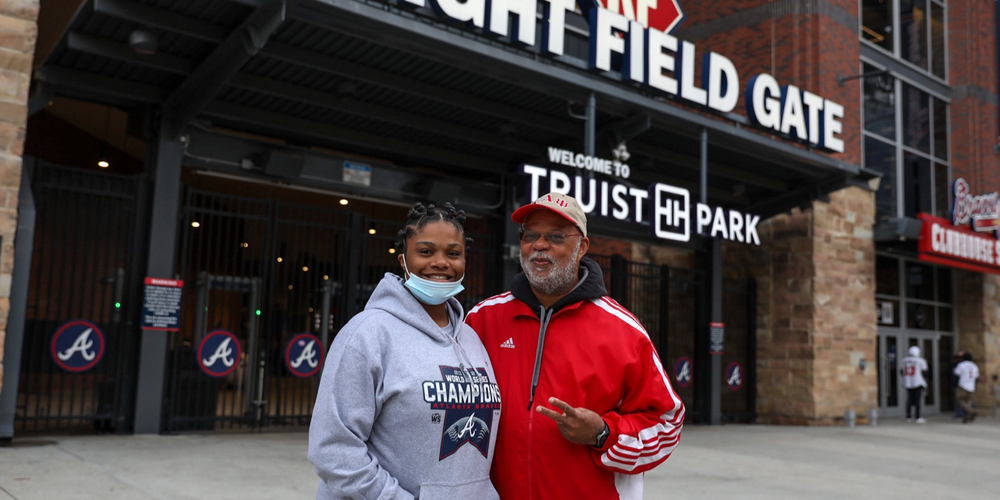 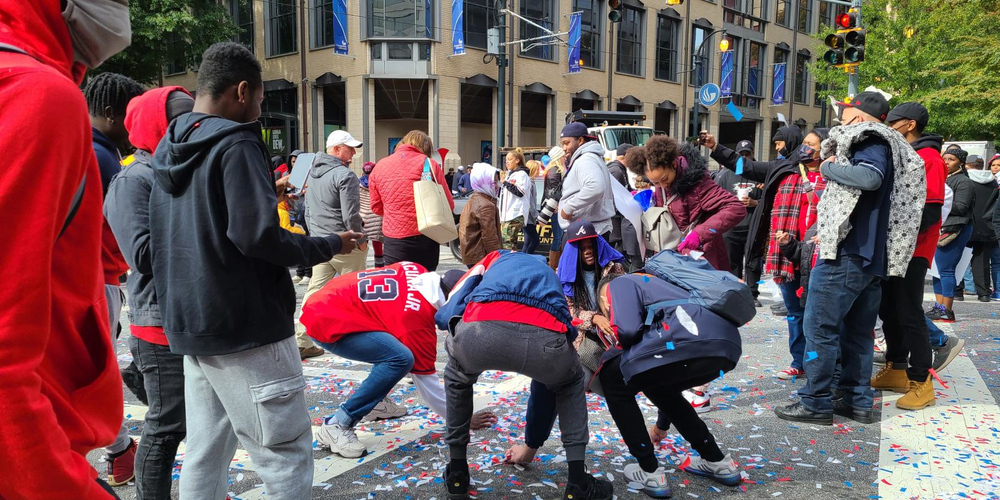 Caption
Fans rush to pick up confetti on the streets of Atlanta, because "it's World Series confetti."
Credit: Amanda Andrews/GPB News 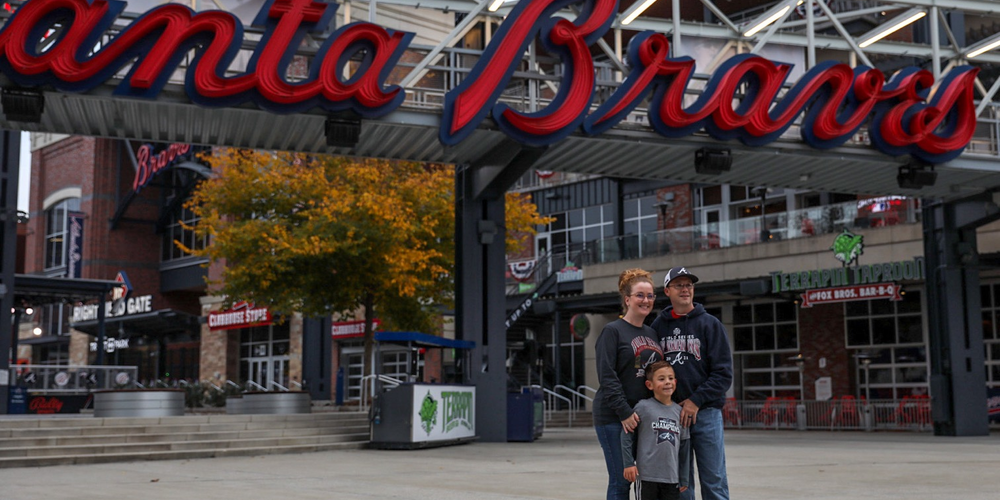 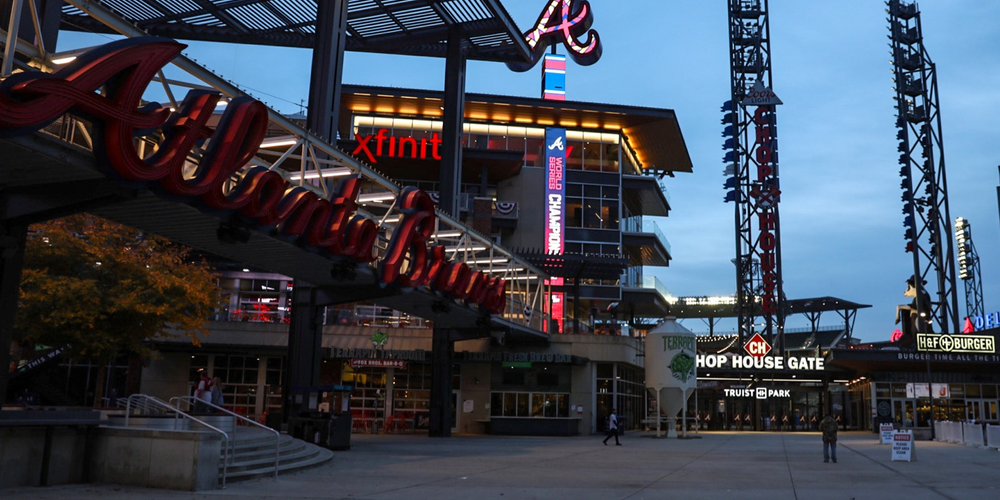 Caption
Before sunrise, fans started to gather in Cobb County to start the celebration and take pictures before the crowd arrives.
Credit: Riley Bunch/GPB News 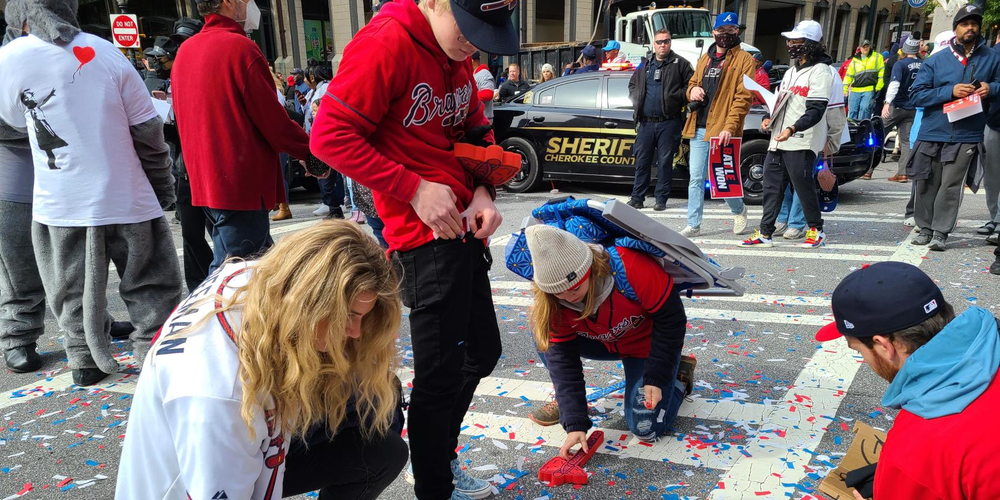 Caption
Fans pick up confetti on the streets of Atlanta, because, they said, "it's World Series confetti."
Credit: Amanda Andrews/GPB News

Atlanta Braves fans on Friday celebrated the team’s first World Series victory since 1995, with tens of thousands of people lining the streets of Atlanta and Cobb County alike and packing Truist Park to give the players a joyous welcome home.

The Braves tweeted a photograph of players holding up the World Series trophy and a message that said it all. “World champs!” the team said.

The Braves defeated the Houston Astros in six games to finish off an improbable season that started with their best player suffering a season-ending injury and the team struggling to be above .500 for much of the season.

The team gathered at the old Atlanta-Fulton County Stadium to start the day at the spot commemorating the legendary Hank Aaron's record-setting 715th home run.

From there, the players soaked in the cheering crowds along Peachtree Street where fans and players alike were showered in confetti. The team then headed up Interstate 75 to Truist Park.

Well before 8 a.m., dozens of people gathered in the Battery at Truist Park — the first fans to arrive to celebrate the victory.

A group of children played football on the turf of the pavilion. Several fans worked to get the perfect photo with the Atlanta Braves sign framed overhead before the larger crowds arrived.

Marietta resident R. L. Robinson and his 17-year-old daughter were among those who arrived early, long before the Braves players are expected grace the park.

For Robinson, who has lived in the area for more than 30 years, the Braves win is “everything.”

“Thank you, Braves!” he said as he tipped his hat off toward Truist Park. “It’s been 26 years since we won and I’m all in.”

Lee and Shenelle Brown have been married for 23 years and first moved to Atlanta in 1998, a year before the Braves last went to the World Series but lost. 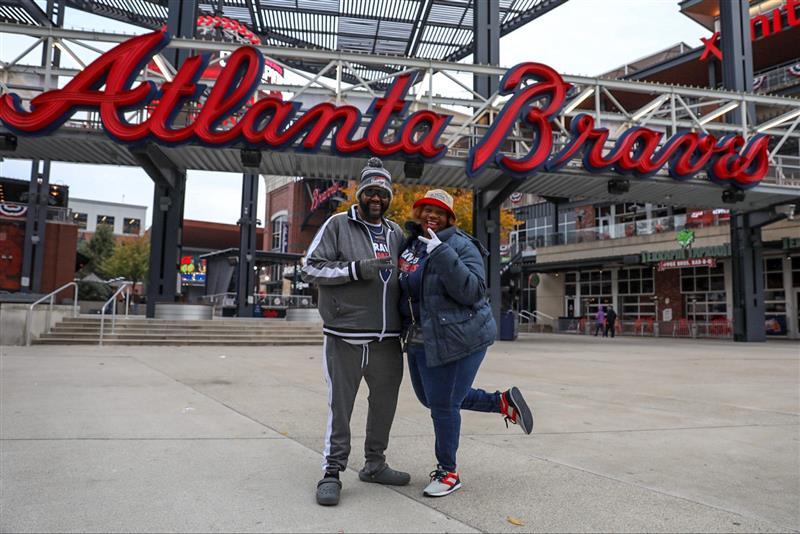 Lee and Shenelle Brown pose in front of the Atlanta Braves sign outside Truist Park. They were among the first fans to arrive early Friday, Nov. 5, 2021, to celebrate the team's World Series victory.

Lee, who lived in Statesboro when the Braves won it all in 1995, said even back then he could feel the energy from Atlanta down in South Georgia. But today, he said, is “indescribable.”

“It’s amazing just to feel the excitement of the city,” he said.

By 11 a.m., the crowd had swelled to thousands. Chairs lined the intersection of Cobb Parkway and Circle 75 Parkway near the ballpark. Cars honked as they drove by.

Once players arrived, a red carpet was rolled out on the field in Truist Park. Each member of the team was introduced to the crowd. There were congratulatory speeches and high fives.

Hank Aaron’s widow, Billye, received a standing ovation when she took to the stage. Many reached for tissues as she began to speak; her husband died earlier this year.

"The chickens have come home to roost this time," she said. "The spirit of Hank Aaron pervades this space. He is here with us. He loved the Atlanta Braves, and I am so very, very happy to see these young men who have picked up the mantle and who are carrying it on."

She turned to the players standing behind her. "Thank you," she said.

The Braves players brought a note of levity compared to her grace. Many lobbied for management to re-sign long-time superstar Freddie Freeman for next season. Others just took in the moment.

"We love you all," Freeman told the crowd. "Champions forever."

Joc Pederson, pearls draped around his neck, said, “What up, Atlanta?"

He thrust his arms into the air, a cigar in his left hand and microphone in his right. “Hey, guess what? We are those mutha f****as!” Pederson shouted to raucous cheers.

Pitcher A.J. Minter said he was just “so happy we got it done.”

“We’re going to show the world how Atlanta parties,” he said. “It’s our time.”

Added Austin Riley, “Today it sunk in we’re world champions. The crowd y’all brought today was unreal. I’m thinking Round 2 next year. What do you say?”

The crowd chanted "repeat, repeat." Confetti rained down on the field. The song "We Are the Champions" echoed around the stadium.

The Braves began the day by summing up the city's mood: "Y'all ready to party?" 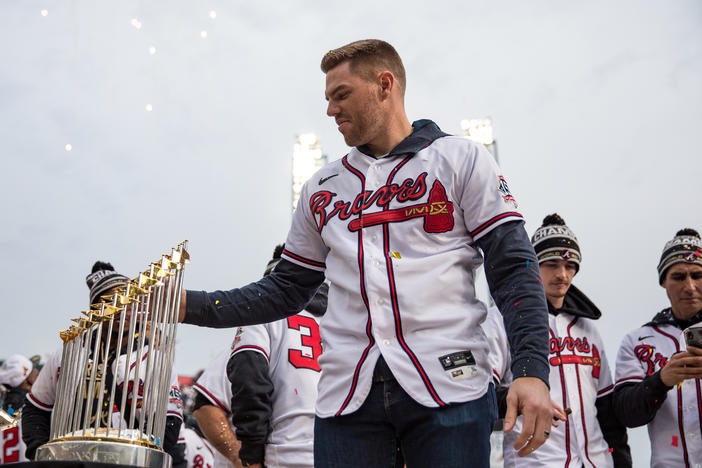 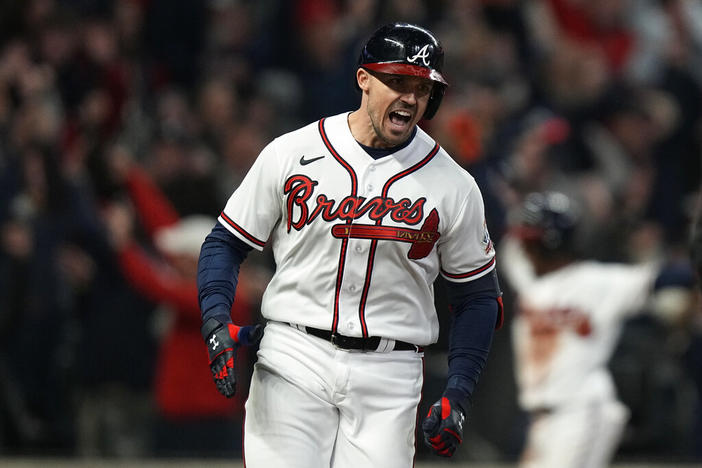 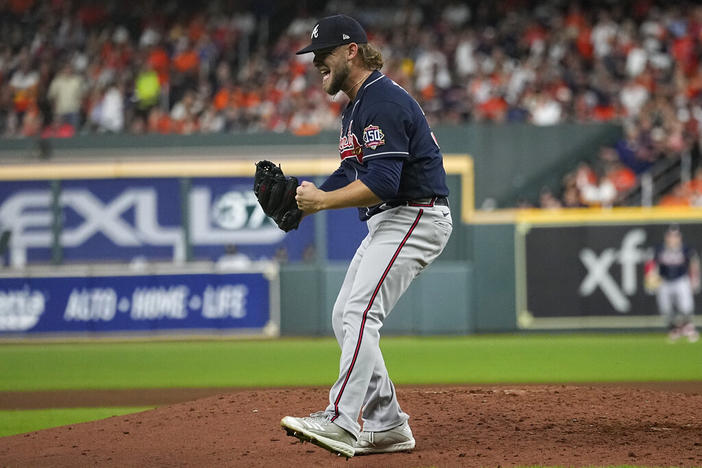