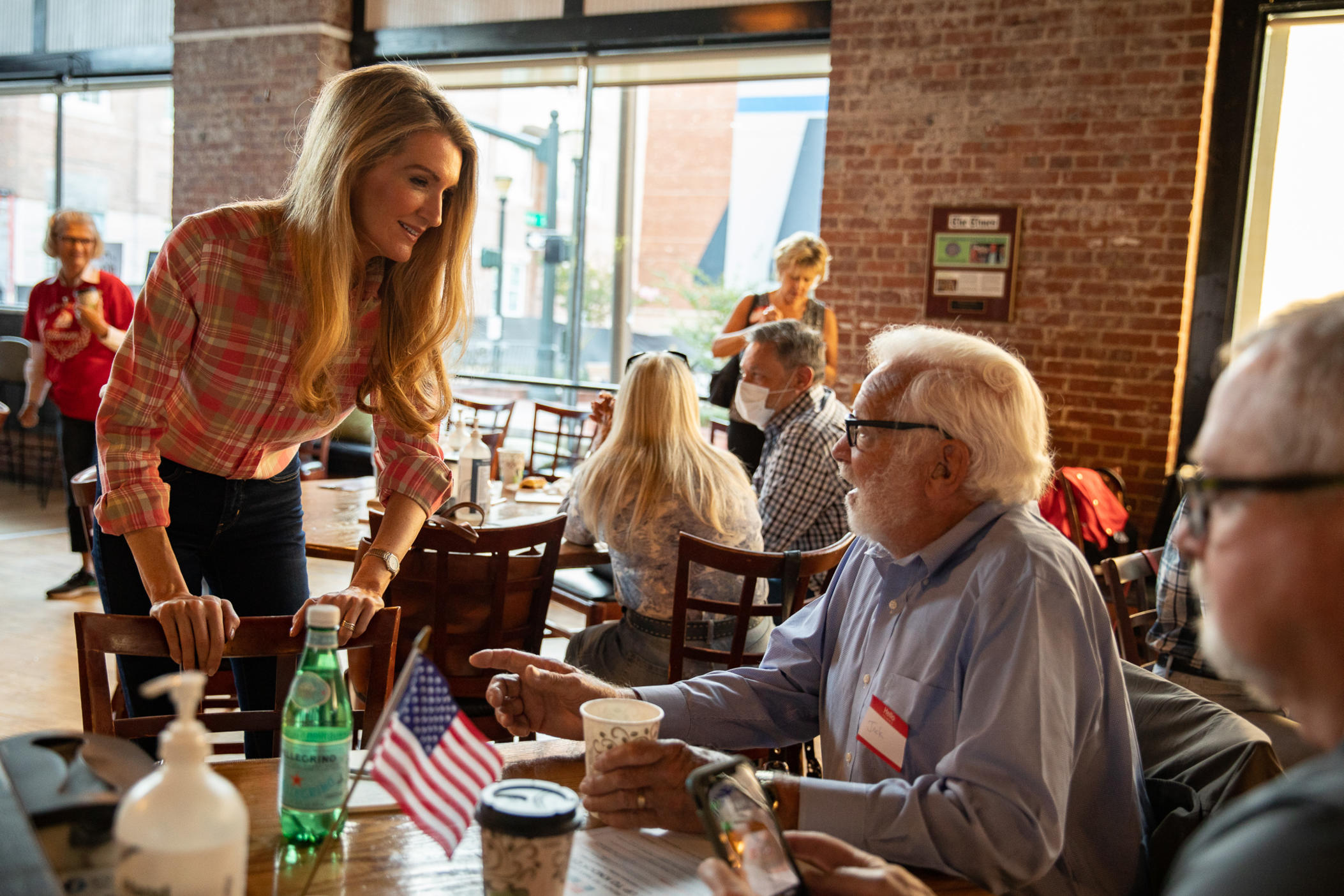 GPB's Riley Bunch catches up with Kelly Loeffler on her latest efforts after losing her U.S. Senate seat

At 9 a.m. on a recent Saturday in Gainesville, Kelly Loeffler made her way from table to table in a local café.

Wearing a pink and green plaid shirt, dark blue jeans and distressed brown work boots, she greeted members of the Republican Women of Hall County and stressed the importance that they turned up to the early morning event.

About 50 people made it downtown for the Greater Georgia training that day, where Loeffler painted a dire picture to Republicans if they don’t get more people to vote.

“The margin of victory lies in the work that you're doing here today,” she told them.

“If you don't turn out and vote in elections, you're not going to have representative leadership,” she warned. “And that's what we have. That's the situation we have in this country today.”

Likely the last image most Georgians have of Loeffler was that of Jan. 6 when the then-U.S. senator planned to protest the state’s electoral votes as part of the so-called “Stop the Steal” movement.

But after supporters of President Donald Trump stormed the Capitol that day, Loeffler ended her protest and accepted the fact that Joe Biden carried Georgia, the first time a Democrat had done so since 1992.

“I cannot now in good conscience object to the certification of these electors,” she conceded on the Senate floor after lawmakers finally emerged from hiding.

But if anyone thought the wealthy Buckhead businesswoman would fade from the Georgia GOP political scene, they were wrong.

She has spent much of the past nine months crisscrossing the state to meet with grassroots Republicans in diners, banquet halls and just about anywhere there is for a hand to be shaken — from Hall County eastward to Greene County on down to Houston County.

With a net worth of around $500 million, it’s hard to answer the question why Loeffler is spending her time rubbing elbows with county GOP leaders. In Hall County, she told the crowd the same thing.

“A lot of people ask me, ‘Kelly, you could be doing anything you want; why are you doing what you're doing?’” she said. “We know what's at stake in this country.”

While most Georgia Republicans are either running for office or throwing their weight behind frontrunners, the former senator appears to be taking a different route.

Although she hasn’t yet ruled out another run for office, in the meantime, Loeffler is on a mission to boost Republican turnout at the polls — an effort that began after she lost her seat in the Senate to Democrat and famed pastor Rev. Raphael Warnock.

Since being voted out of office, Loeffler has poured her political power and cash into launching a new conservative voter registration and mobilization group, Greater Georgia, an organization she tags as a new weapon in the high-stakes fight to keep Republican control of the Peach State.

According to her spokesman, Loeffler has spent over $1 million of her own funds on the project.

Loeffler may know better than anyone the impact of those voters choosing not to cast their ballot. She and her Senate counterpart, former Sen. David Perdue, were defeated by Democrats in the Senate runoffs by razor-thin margins.

Trey Hood, a political science professor at the University of Georgia, said Loeffler and Georgia Republicans should be concerned.

“The question about the future is: Are a subset of Republican voters — those people that are very strong supporters of former President Trump — going to return to the polls or are they going to be turned off by this message being put out that the election was stolen?” he said.

Despite Loeffler’s deep-red rhetoric and association with the likes of extreme Republican U.S. Rep. Marjorie Taylor Greene on the campaign trail last year, she is now trying to offer a voice of reason.

“We know that in 2021, in January, over 300,000 Republicans who voted in November did not come back out in January,” she said. “And look, we understand what happened.” 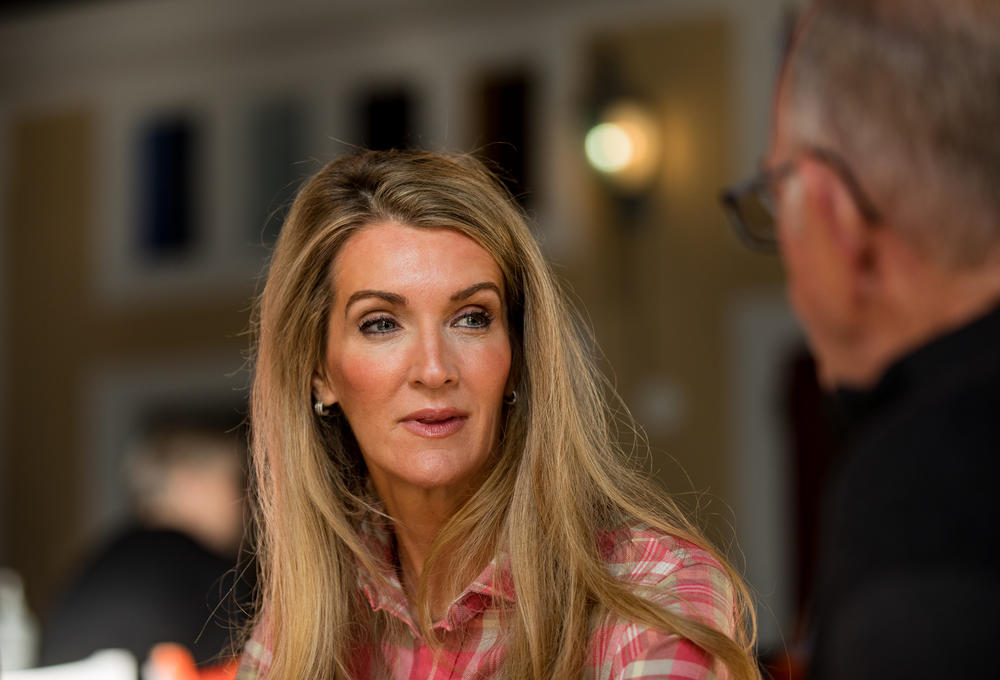 Former U.S. Senator Kelly Loeffler speaks with the crowd during a Greater Georgia event in Gainsville on Oct. 9, as part of her effort to boost Republican turnout.

But she quickly swung far to the right and tethered herself to Trump and his deep-red base — a group of voters she needed to beat out her Republican rival and Trump loyalist, Doug Collins, in a crowded primary.

Notably, she feuded with the WNBA’s Atlanta Dream — of which she was a part owner — over the Black Lives Matter movement and ran a campaign ad claiming she was “more conservative than Attila the Hun.”

She boasted what she called a voting record 100% in line with the former president.

With Georgia’s slim voting margins determining the party-hold of Congress, Trump latched himself to the race and traveled to the state for multiple rallies to support Loeffler and Perdue.

But despite Trump’s efforts, Biden narrowly won the state by about 12,000 votes, results that were counted three times, including once by hand.

At a rally in Dalton on Jan. 4,  the night before the Senate runoff, Trump stood closely over Loeffler’s shoulder. With the president looming on stage, Loeffler declared she would stand along with a faction of D.C. Republicans — and vote to object to the electoral college tally of Biden’s win. 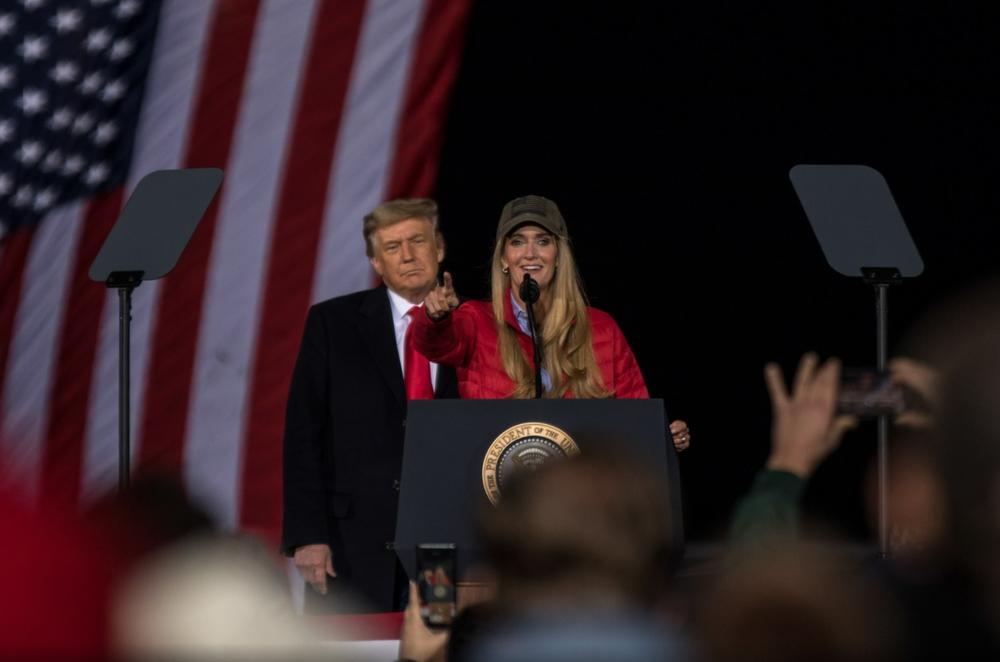 Former U.S. President Donald Trump watches on as Former U.S. Sen. Kelly Loeffler announces she will object to the electoral college vote certification of President Joe Biden's win during a rally in Dalton on Jan. 4, 2021.

Loeffler lost her runoff race by about 93,000 votes. Many speculated Trump’s constant allegations of a rigged election had inadvertently suppressed Georgia’s red voter base — a fact many Republicans concede is what happened.

The former president’s hold on Georgia during the 2020 election was just the beginning. Ever since his defeat, he has targeted state leaders, including Kemp and Secretary of State Brad Raffensperger, for not doing more to discredit the election results in Georgia.

Trump has also inserted himself into next year’s U.S. Senate race, pushing close friend and legendary University of Georgia football player Herschel Walker to go up against Warnock’s reelection bid.

Experts suspect Trump’s continued meddling in the state’s elections will continue to ripple into 2022 and have a chance of hindering Republicans from bolstering their numbers. Some within the GOP squirmed at a recent rally in Perry when Trump endorsed Stacey Abrams, even if it was meant as a bad joke, over Kemp for governor.

A GPB News analysis found that a decline in white rural turnout played a large role in Democratic statewide victories.

For her part, Loeffler has targeted her conservative voter mobilization efforts to those rural counties, all of them traditional GOP strongholds. Last month, Greater Georgia launched a “Red Belt Blitz'' in Bartow, Cherokee, Floyd, Forsyth and Hall counties to train local party members on how to canvas and register voters.

“Rural small towns, counties in both North and South Georgia across the state,” said Hood with the University of Georgia. “Those are the areas where you'd be worried about people staying home.”

But before her speech in Hall County, Loeffler still fielded a barrage of questions about voter fraud, some referencing debunked theories.

The former senator responded by asserting the positive impacts that Senate Bill 202 — Georgia’s restrictive voting measure passed in the wake of the 2020 election — and promoting upcoming poll worker training hosted by Greater Georgia.

But Loeffler walks a thin line between appealing to ultra, pro-Trump conservatives and avoiding the same false allegations of election fraud that has pushed them away from the polls.

When asked if she had concern about Trump’s involvement in Georgia politics, Loeffler didn’t directly answer. 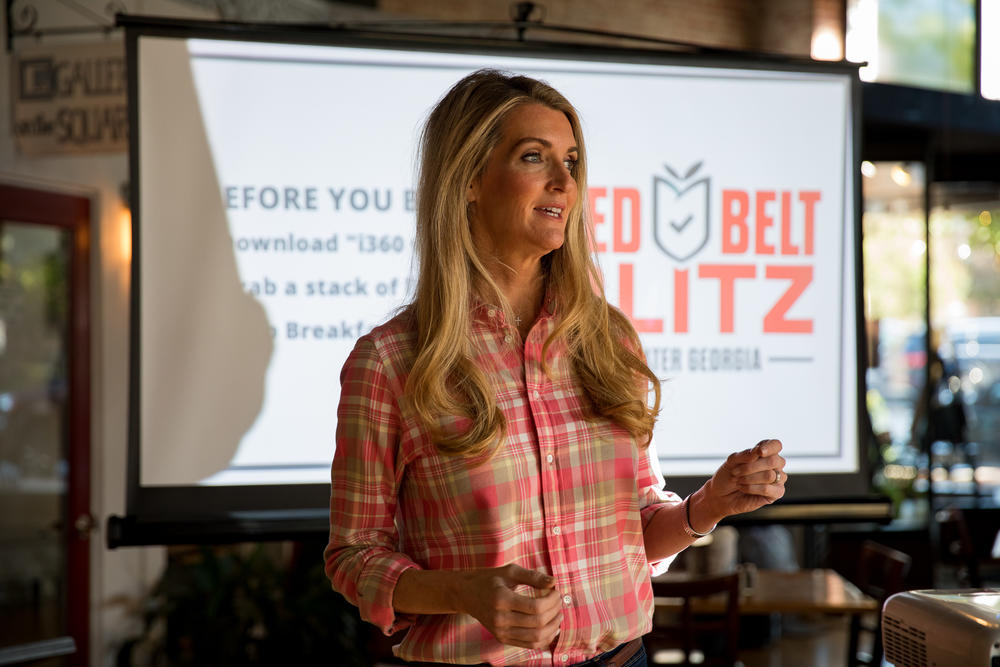 Kelly Loeffler presents to local Republicans in Hall County on Oct. 9 as part of her new project to register and mobilize conservatives.

Skeptics of Loeffler’s motives have called the organization a copycat effort to high-profile Democrat Stacey Abrams’ Fair Fight Action that raised over $100 million in just over two years since its founding.

Loeffler isn’t shy about admitting Democrats have a longer and more successful history of organizing efforts and dubs her work the first step to counteract it.

The former senator referred to herself as the “head volunteer” in charge of the counterattack.

Loeffler says there’s a bounty of unregistered or inactive right-leaning voters just waiting to hear from grassroots conservatives — and even pointed to minority outreach, a demographic which Republicans have largely ignored.

The Greater Georgia website proclaims there are more than 1 million unregistered, right-leaning conservatives to tap into. An earlier version of the website listed 2 million.

But data from the federal government estimates that about 95% of residents in Georgia eligible to vote are already registered. Loeffler's staff dispute that figure.

Democrats have been building their network for years — a long-term plan that paid off in dividends when Jon Ossoff and Warnock were sworn in as Georgia’s newest U.S. senators. 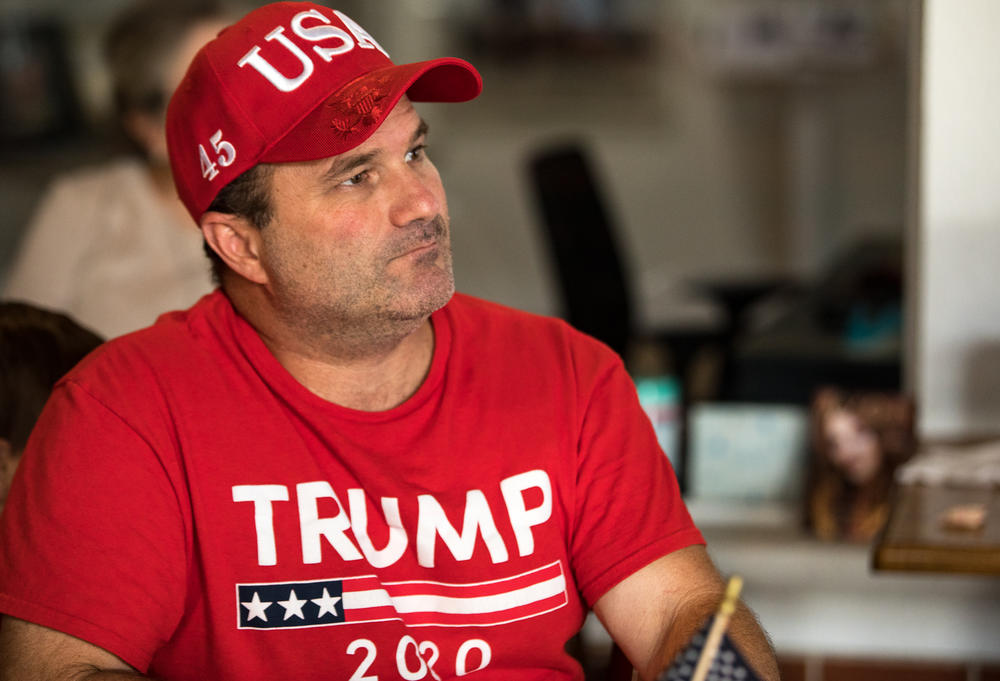 Hall County resident Eric Denison said there’s a lot of grassroots conservatives across Georgia who don’t know how to reach out to new voters, because they’ve never had to.

“There's a lot of people who are just waiting for somebody to show them a way to get involved,” he said. “I think this is going to be a really helpful way to get people moving forward with conservative ideas.”

Betty Fisher, president of the Republican Women of Hall County, said Republicans have to get out and vote like a ”Georgia dog red tide.”

Whether or not Loeffler’s new venture actually boosts turnout, it’ll be hard to pinpoint the impact of Greater Georgia, Hood said.

“Even if turnout maintains itself or goes up for the Republicans, it would be hard to link it specifically to this project, per se, without some direct evidence,” he said. “But I guess it can't hurt. What she's doing, can't hurt her or hurt the Republicans.”

It’s also not out of the question that Loeffler is creating a presence to boost a possible future bid for office, Hood said.

Until Loeffler decides to rule out another run for office, she may be the only Georgia Republican with the time and resources to dedicate to trying to get more conservatives to the polls — instead of pushing them away.