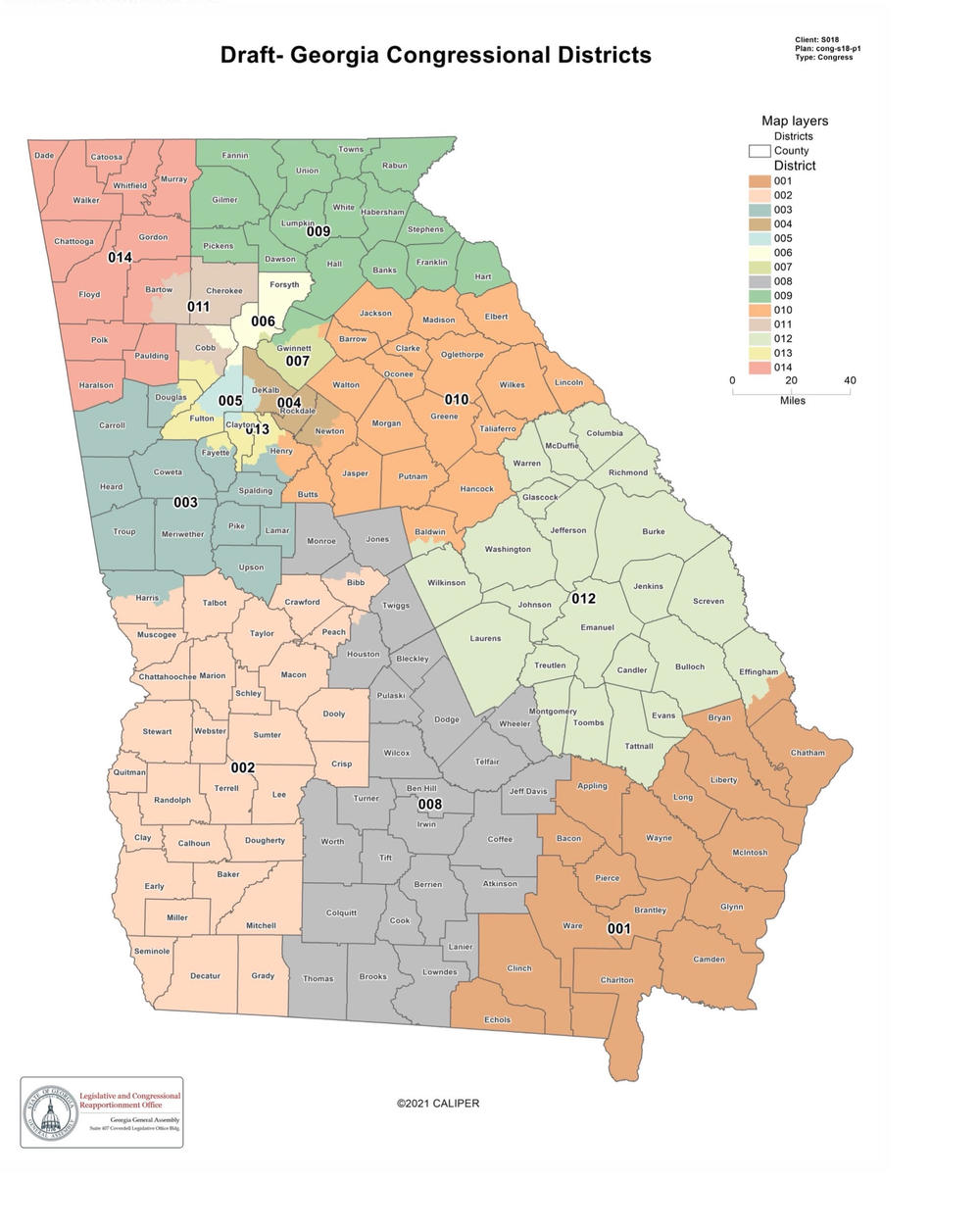 The plan, unveiled Monday by Lt. Gov. Geoff Duncan and redistricting committee chair Sen. John Kennedy, will not likely be the final version that lawmakers will vote on in November's special session but gives a good starting point to see potential changes.

While the map was not initially released with accompanying data, a GPB News analysis of the proposed lines imported into Dave's Redistricting App shows few incumbents would see a dramatic boost in the safety of their districts, except Rep. Carolyn Bourdeaux in Georgia's 7th. Under this proposal, the new 7th voted for President Joe Biden by about 24 points last year, as opposed to about six points under the current lines.

The 7th would sit almost completely within Gwinnett County, appearing to run mostly south of Interstate 85 and include portions of Johns Creek in Fulton County.

But Rep. Lucy McBath in the 6th Congressional District would face a tougher road to reelection, with her district swinging from Biden +12 to Trump +6 in last year's election. This is accomplished by removing parts of East Cobb and all the DeKalb County portions of the district,  while adding in Sandy Springs, Buckhead and including Republican-friendly Forsyth County to the mix.

Data released by the reapportionment office Tuesday shows the 2nd District in Southwest Georgia might no longer be majority-Black after adding in the rest of Muscogee County, parts of Harris County and a sliver of Centerville in Houston County while losing some of Macon-Bibb. That district, represented by Sanford Bishop, would become slightly less Democratic.

Georgia's other three Democratic districts would keep roughly their same partisan breakdown but have slightly different shapes. Georgia's 5th Congressional District would have fewer DeKalb and Clayton voters and slightly more in Southwest Atlanta down into College Park and East Point. The 4th District would no longer include Gwinnett and instead cover almost all of DeKalb in addition to existing voters in Rockdale and part of Newton. The 13th District boundaries would cede half of Douglas County to the 3rd and take more of Clayton County.

For Republicans, the 3rd, 9th, 11th and 12th appear to be slightly weaker districts than before, while the 1st, 8th and 14th would keep the same overall margins. The 8th in South Georgia grows slightly stronger.

Rep. Barry Loudermilk's district in particular would continue his leftward shift by keeping much of Cobb County's Democratic core along I-75 while ceding parts of Bartow County and all of the previous precincts in Fulton County.

Rep. Andrew Clyde would no longer live in the 9th District, though you don't have to live in your congressional district to run or represent it. The 9th now dips into Gwinnett County, and all of Athens-Clarke County is now in the 10th.

There are still weeks before the beginning of the special session when lawmakers will meet to approve new maps for Congress, state House and state Senate, and it is likely that several other drafts will appear before getting close to final boundaries. We don't know how current representatives feel about the map, we don't know the exact political and demographic breakdowns of the map and we don't know what legal or logistical challenges the map would raise without the data.

Politically speaking, this map faces several hurdles to becoming reality. Committee hearings over the summer were done with the joint House and Senate committees, but this was solely released by Duncan and the Senate redistricting chair. Duncan, who is the lame-duck president of the Senate and has become a pariah in his party, will oversee a caucus that is bitterly divided over a primary to replace him. Plus, several U.S. House Republicans who have less safe districts were not shored up to potentially counteract the state's demographic and political shifts over the next decade.

Georgia is a competitive battleground state, but its political maps don't quite show it.