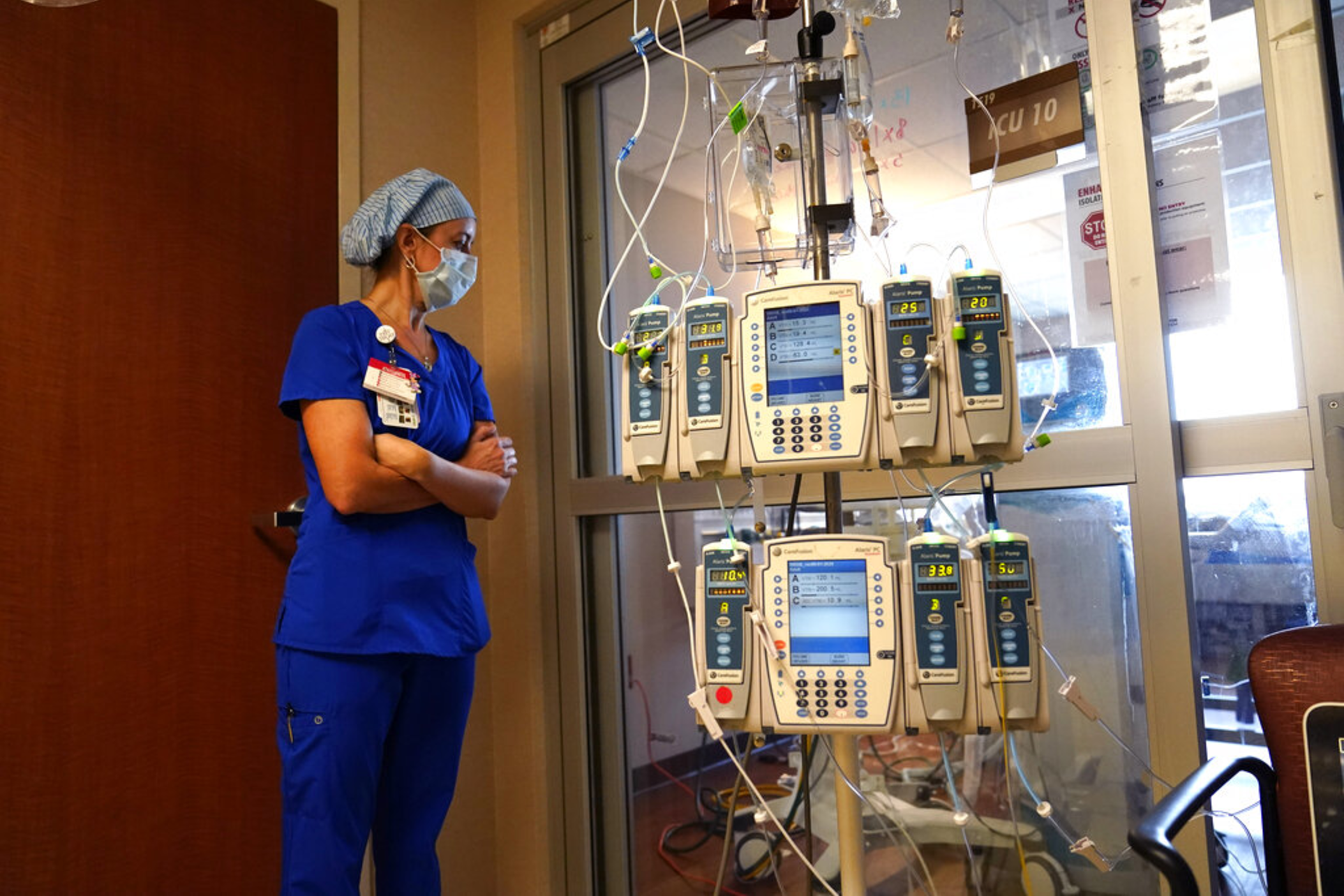 Caption
Nursing coordinator Beth Springer looks into a patient's room in a COVID-19 ward at the Willis-Knighton Medical Center in Shreveport, La. on Aug. 17, 2021. In Georgia, similar scenes played out in the summer surge of the pandemic.
Credit: Gerald Herbert/AP Photo

In the rooms at Phoebe Putney Memorial Hospital, death threats made by patients against nurses are not uncommon. The verbal abuse has happened to both Kelsey Reed, director of patient care, and her staff.

Every day at the start of each shift, leaders from each unit debrief any safety issues over the past 24 hours.

“There's not a week that goes by that we do not hear about an instance in which a patient or family member was verbally or physically aggressive with staff,” she said.

The Albany, Ga., hospital — among the earliest and worst hit by coronavirus surge — has seen a recognizable increase in both verbal and physical attacks against its staff over the past 18 months, she said.

“Our health care workers, they're already working extremely hard, day-in and day-out, to take care of those that need it most,” Reed said. “So dealing with a violent or aggressive patient just increases that stress level even more.”

But the assaults on health care workers go far beyond words. In many cases, hospitals say, medical staff are left with injuries.

According to a Northeast Georgia Health System security team report, screams could be heard from inside a room at one of the system's hospitals. A patient had a nurse pinned against a door, pressing her head into it. The patient had hurt himself at the same time, and blood spilled onto the floor.

While both verbal and physical abuse against health care workers has long plagued the profession, leadership attributes record levels of incidents to the devastation wrought by the COVID-19 pandemic and the strain it has put on resources.

Critical staffing levels, strict family visitation policies and the crush of coronavirus patients has created a dire environment where every staff member is at risk of assault. Violent incidents have become so ingrained into the daily routine, doctors say, that they struggle to get staff to even report them.

Now, hospitals are asking the state for help. A Senate study committee on violence against health care workers is meeting for the first time this week to tackle what policymakers can do to protect Georgia’s frontline workers.

The brutal reality of patients attacking their caregivers existed long before the pandemic pushed it to a crisis level.

According to the Bureau of Labor Statistics, in 2019, incidents against health care and social service workers accounted for 70% of all nonfatal workplace injuries and illnesses requiring days away from work.

The American Nurse Association reported the same year that 1 in 4 nurses were assaulted on the job.

Georgia lawmakers previously examined the issues in 2014, with a joint committee of legislators from both the state House and Senate. In 2016, the General Assembly voted to enhance penalties for assaulting emergency nurses.

But little seems to have changed.

The Senate resolution creating the current study committee says that “over 80% of all hospitals’ staff have been assaulted at least once in their career.”

As intensive care beds have dwindled across the state, delays for care have increased, with waiting rooms jam-packed with patients.

“I think one of the big causes of this is that our resources are taxed in a way that they've never been taxed before,” he said.

And the most recent wave of COVID-19 cases has been different — younger people, mostly unvaccinated, are catching the virus at a higher rate and getting sicker.

It’s harder for hospital staff and families to manage the emotional impact of a young individual dying early in their life. And fluctuating visitation policies have also angered patient’s families throughout the pandemic who struggled to be separated from their loved one.

“Those types of things create stress not just for families, but also for the health care workers that are trying to provide care as quickly as possible when there's limited resources,” Davé said.

At Phoebe Putney, nurses may have five or six patients to tend to during their shifts. At the same time, they’re fielding calls from worried family members who can’t be at the bedside of their loved one.

“Their workload is increased in addition to the patient load,” Reed said.

Hospitals say that the pandemic has brought a wave of loss and stress that has affected the dynamic between families and staff in the medical environment. With Georgians losing jobs, homes and loved ones, tensions are high.

Deb Bailey, executive director of government affairs for Northeast Georgia Health System, said the phenomenon is on par with the increase in violent outbursts the country is seeing elsewhere.

“What we've seen since COVID is a huge increase of violence against our health care workers,” she said. “I think it's not really any different than what we're seeing on the news at night on what's happening on airlines, what's happening on our streets in our cities. That's also happening in our hospital environment.”

‘Part of the job’

The number of times the security team at Northeast Georgia Health System — which has four hospitals in Gainesville, Barrow, Braselton and Lumpkin — has been called to intervene and protect a staff member from harm more than doubled from 2019 to 2020 — from 349 incidents to 711.

Last year, NGHS recorded 228 reported incidents of violence against their staff. This year, the medical facility has recorded 273 through the middle of August.

But Davé said those numbers likely fall way below the actual count. The hospital system has struggled to get its staff to report all incidents of violence because verbal and physical assaults have become so common.

“We're in our profession for a reason," Reed said. "We're here to help people and to serve people and that's our job, is to take care of people. So I think that often makes it really easy to just excuse the behavior. It's almost like we accept it as just being part of the job, but it should not be the norm.”

The heated political rhetoric has not helped. Some folks grow angry when told to wear a mask; others believe the virus is a hoax. All of that has created a toxic environment for those on the front lines.

On a state health board call last week, Georgia’s top health chief burst into tears over the harassment and vitriol spewed at health care workers.

State Sen. Michelle Au, a Johns Creek Democrat, is an anesthesiologist and member of the study committee. She said the harassment of public health workers is particularly concerning to her because it stymies vaccination efforts.

But lawmakers have a tough road to address the issue at a time when pandemic politics plagues public health decisions.

Hospital officials say that they hope the committee sends two messages: that the state supports its tireless workers and that violence against them won’t be tolerated.

If you are a health care worker who has experienced verbal or physical violence at work, please contact reporter Riley Bunch at rbunch@gpb.org.