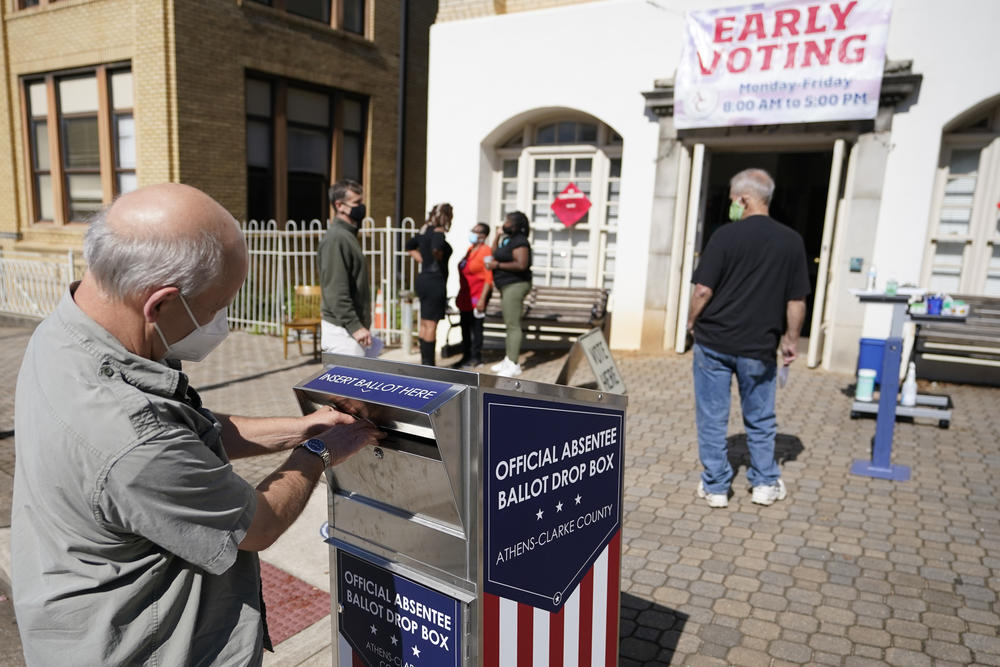 In this Monday, Oct. 19, 2020 file photo, a voter submits a ballot in an official drop box during early voting in Athens, Ga. Georgia’s secretary of state says, Tuesday, June 15, 2021, his office is reviewing the handling of paperwork related to ballot drop boxes in the state’s most populous county during last year’s election.

The state’s new voting law, passed by the Republican majority of the General Assembly, limits the availability of the boxes in future elections, especially in Democratic areas where voters relied on drop boxes.

About 56% of absentee voters in Cobb, DeKalb, Fulton and Gwinnett counties returned their ballots in drop boxes before November’s election, according to ballot transfer forms.

Until now, the number of voters who returned their absentee ballots in drop boxes rather than the mail wasn’t known.

The Atlanta Journal-Constitution and Georgia Public Broadcasting found out how many people used drop boxes by obtaining ballot transfer forms from election officials, then spending over 90 hours entering data from thousands of handwritten forms into a spreadsheet. The forms showed how many ballots were collected daily from each drop box leading up to the Nov. 3 election. 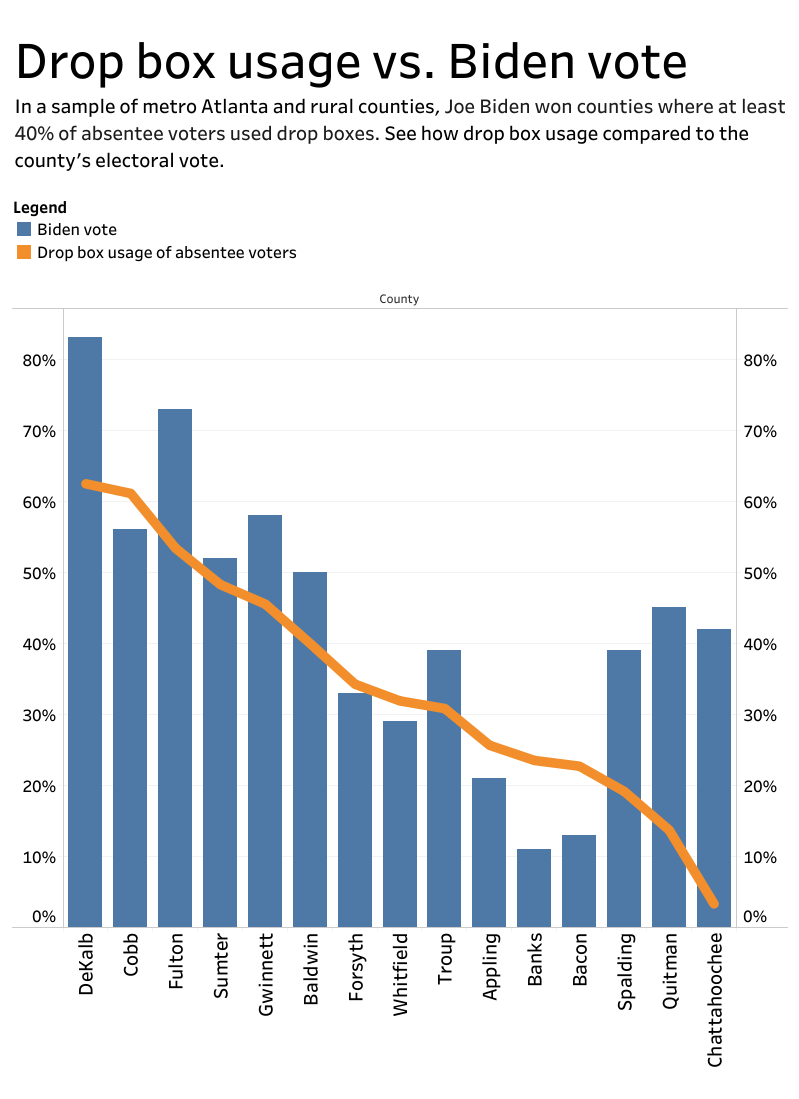 In metro Atlanta’s four most populated counties, more than 305,000 out of 547,000 absentee voters deposited their ballots in drop boxes. By comparison, a sample of 11 smaller counties across Georgia found 32% of absentee voters used drop boxes, with the rest delivered by the U.S. Postal Service.

Drop boxes were an innovation brought on by the coronavirus pandemic, approved by the State Election Board to accommodate a surge in absentee voting during last year’s elections, including Democrat Joe Biden’s victory over Republican Donald Trump.

Georgia’s voting law allows drop boxes but with tight restrictions: They must be located inside early voting sites, available only during in-person voting hours, and shut down when early voting ends the Friday before an election.

Every county is required to install at least one drop box, but no more than one for every 100,000 active registered voters. That means the number of drop box locations in metro Atlanta’s four core counties will shrink from 111 to 23.

“They are no longer useful,” Cobb Elections Director Janine Eveler said. “The limited numbers mean you cannot deploy them in significant numbers to reach the voting population.”

Multiple lawsuits against Georgia’s voting law, including one filed by the U.S. Department of Justice, challenge its limits on absentee voting, saying restrictions create obstacles for Black voters who voted remotely at a higher rate than white voters. The law reduces the number of drop boxes, adds voter ID requirements and imposes shorter deadlines for requesting absentee ballots.

“The law seems that it was designed to limit options in the metro areas versus the rural areas,” said Amber McReynolds, CEO for the National Vote at Home Institute, an organization that advocates for voting access outside polling places. “Honestly, there’s no logic to it, other than to curtail a certain segment of the population from voting.”

Republican supporters of Georgia’s drop box regulations reject the idea that they targeted counties because of their political leanings or demographics.

“There should have been some regulation and tightening rather than having drop boxes all over the place,” said Dugan, a Republican from Carrollton. “Even though it’s not as broad as it was during the emergency period, it still is there. It still exists and people can take advantage of it, or they can mail it from their house or go in and vote.”

While there’s no indication of tampering with drop boxes in Georgia, Dugan said he was concerned that outdoors drop boxes were vulnerable to arson, as in Boston and Los Angeles County, where dozens of ballots were damaged or destroyed.

Advocates for drop boxes say they’re more secure than the mail, where ballots aren’t monitored by video and can be delivered too late to be counted. Georgia law requires that all ballots be received by county election offices before polls close on election day.

The most popular day for drop boxes was election day, when voters returned their ballots soon before the state’s deadline, according to election records.

But Georgia’s new voting law doesn’t allow drop boxes after early voting ends the Friday prior to an election or before early voting begins. About 40% of drop box ballots last fall were returned outside the new time frame allowed by the law.

State Sen. Elena Parent, a Democrat from Atlanta, said Republicans limited drop boxes because they view increased voter participation as a threat to their hold on power.

“Anything that makes it easy to vote is something they look askance at,” Parent said. “It’s about eliminating options that could drive up voter turnout, which could make a difference on the margins in a tight state.”

Voters in rural areas are less likely to use drop boxes because it’s more convenient to return them through the Postal Service than drive to a drop box location, McReynolds said.

Across the country, 24 states allow drop boxes, according to the National Vote at Home Institute.

Drop boxes were available last year in 124 of Georgia’s 159 counties, according to election records.

County election directors in both urban and rural counties said drop boxes were most beneficial to voters when they were easily accessible last year.

“I have not had one person drop their ballot off in the drop box since it has been placed inside,” said Appling County Elections Supervisor Shonda Carter, where a runoff for a state House seat will conclude on election day Tuesday. About 26% of absentee voters used drop boxes in Appling last fall. 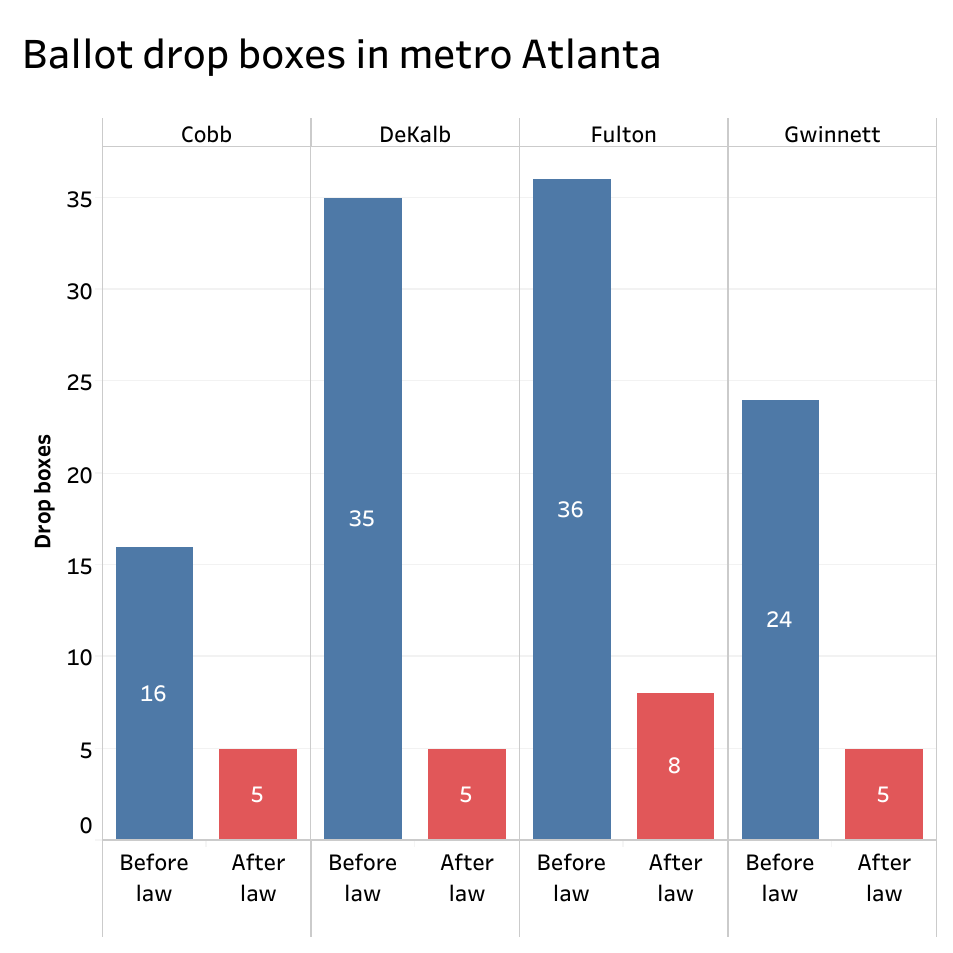 “We have to really work to educate voters on these changes so they can plan accordingly for this election cycle,” Hamilton said. “It’s critical for voters to know how, when and where to use drop boxes for them to remain effective.”

Forsyth County Elections Director Mandi Smith said drop boxes gave voters certainty that their ballots had been received without having to depend on the Postal Service. About 34% of absentee voters in Republican-leaning Forsyth used drop boxes.

“Maybe not as convenient as 2020, but they’re still an additional option that wasn’t present prior to 2020,” Gwinnett Elections Division Director Lynn Ledford said.

The most drop boxes in the state were in Fulton, which had 38 last year, a number that will shrink to eight under Georgia’s voting law. At least 53% of absentee voters used drop boxes in Fulton, which overwhelmingly votes for Democrats. The county was missing ballot transfer documents for eight drop boxes across three days, meaning there were slightly more drop box ballots than the 78,000 reported by the county.

“The convenience factor is definitely lower” under Georgia’s new voting law, said Alex Wan, chairman for the Fulton elections board. “If the new inconvenience of voting absentee by mail or through a drop box means more people are voting in person, then are we going to be prepared for that shift? That’s been the challenge.”

Record numbers of Georgia voters returned absentee ballots in November’s election, about 26% of all 5 million votes cast, but until now it wasn’t clear how often voters used ballot drop boxes instead of the mail.

The Atlanta Journal-Constitution and Georgia Public Broadcasting requested documents from the secretary of state’s office and county election offices to find out drop box usage rates. Ballot transfer forms filled out by the counties showed how many ballots they retrieved daily from each drop box.

Reporters from the AJC and GPB spent over 90 hours entering information from drop box forms from 15 counties into a spreadsheet. This effort focused on the four largest metro Atlanta counties and a sample of 11 smaller counties throughout the state. A full statewide assessment of drop box usage would require further research.

The data shows that 56% of absentee ballots in Cobb, DeKalb, Fulton and Gwinnett counties were returned in drop boxes, compared with 32% in the 11 smaller counties.

Drop box usage as a percent of absentees returned

Mark Niesse has covered voting rights, elections and Georgia government for the AJC since 2017.