It's been nearly four years since white nationalists marched in Charlottesville, Va., to protest the planned removal of a statue of Robert E. Lee. Of course, one person was killed and dozens wounded when a driver sympathetic to the cause of the white supremacists rammed his car into counterprotesters. Today, crews moved in to take the statue of Lee down, along with one of Stonewall Jackson. Ben Paviour of member station VPM joins us now from Charlottesville. Ben, thanks so much for being with us.

SIMON: And tell us about the scene today, if you can.

PAVIOUR: Well, the work crew made pretty quick work of Lee. He was taken down. The statue was taken down in about an hour. I covered statue removals a lot in Richmond last year, and this was by far the sort of fastest and smoothest removal I've seen. Lee was loaded onto the back of a long truck and sent off to city property. They've turned to do the same with the Jackson statue down the block. This is a hundred-year-old statue. There's some potent symbolism here. And spectators and media are watching from across the street.

PAVIOUR: Not that I've seen. It's really been a tranquil scene - a few hundred people milling around, you know, filming the scene, stopping by on their morning walks or dog walks. I saw one man painting watercolor. One of the people here was Zyahna Bryant, and she led a petition to take these statues down in 2016 when she was a student at Charlottesville High School. She says it's important to celebrate this win, but...

ZYAHNA BRYANT: The systemic work is much longer, and it's going to take much more work. And that's what has to come after this. Otherwise, it's just an empty, symbolic gesture.

PAVIOUR: These statues came down on the watch of Mayor Nikuyah Walker, the first Black woman to hold that post in Charlottesville. She's a bit of a controversial figure here, but she's been very forceful on the need for Charlottesville to address structural racism.

SIMON: Ben, of course, there was a lot of criticism of police and local authorities not reacting in time to prevent deadly violence four years ago. What's been different this time?

PAVIOUR: Unlike that rally, there was just very little notice for this takedown. The city didn't officially announce it until yesterday. But there clearly was a lot of preparation that went into this. There's fences up, road closures, some police presence, but not a ton that I've seen so far.

SIMON: And any indication why they decided to take the statues down now, this weekend?

PAVIOUR: It's a good question because the city council voted to take these down in 2017, but then they got tied up in legal battles that were only resolved in April when the Virginia Supreme Court issued a ruling allowing them to come down. And since then, city council took a few procedural votes, including one Wednesday that set aside money for this. But as far as the exact timing today, you know, that's still unclear.

SIMON: And the statues - what happens now?

PAVIOUR: They're going to be stored on a secure location on city property. Beyond that, 10 different groups have expressed interest in taking the statues, so city council could decide to give it to one of them or destroy it entirely, although there's some debate around the legality of that second option.

SIMON: Ben Paviour of member station VPM in Charlottesville, Va. Ben, thanks so much for being with us. 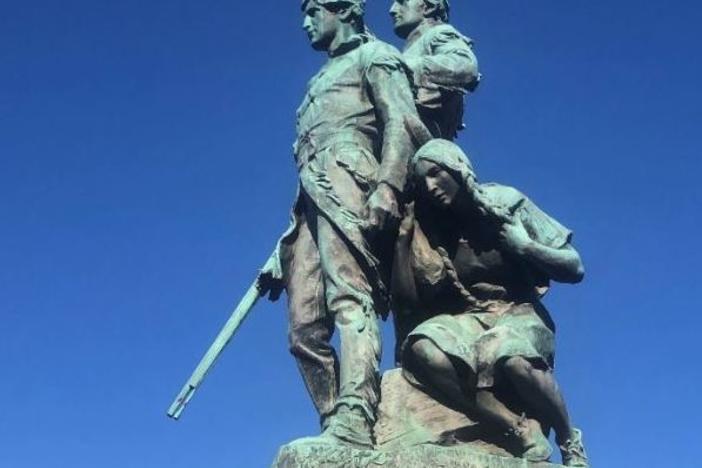 After Removing Two Statues, Charlottesville Officials Vote To Take Down A Third

First, the city took down statues of confederate Generals Robert E. Lee and Stonewall Jackson. Then its council voted to remove a statue featuring Meriwether Lewis, William Clark and Sacagawea. 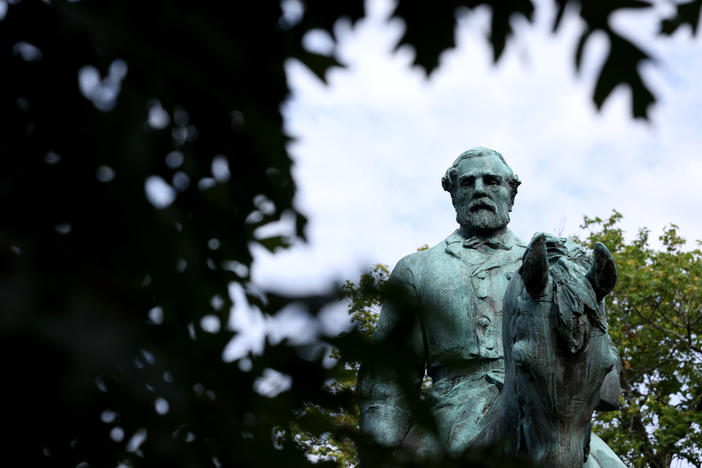 Statues of Robert E. Lee and Stonewall Jackson will be removed in the Virginia city almost four years after the deadly Unite the Right rally. 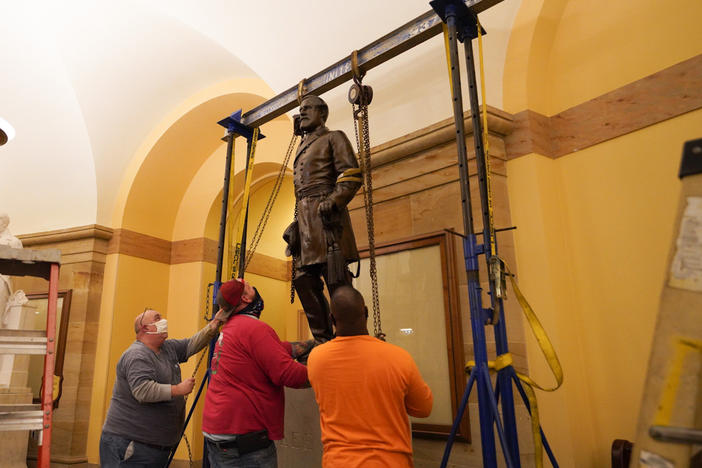 The Confederate general's statue is expected to be replaced by one of civil rights activist Barbara Johns, who at 16 led a student walkout protesting inferior conditions at an all-Black high school.