'Gossip Girl' For Gen-Z Seemed Like A Great Idea, So What Went Wrong? 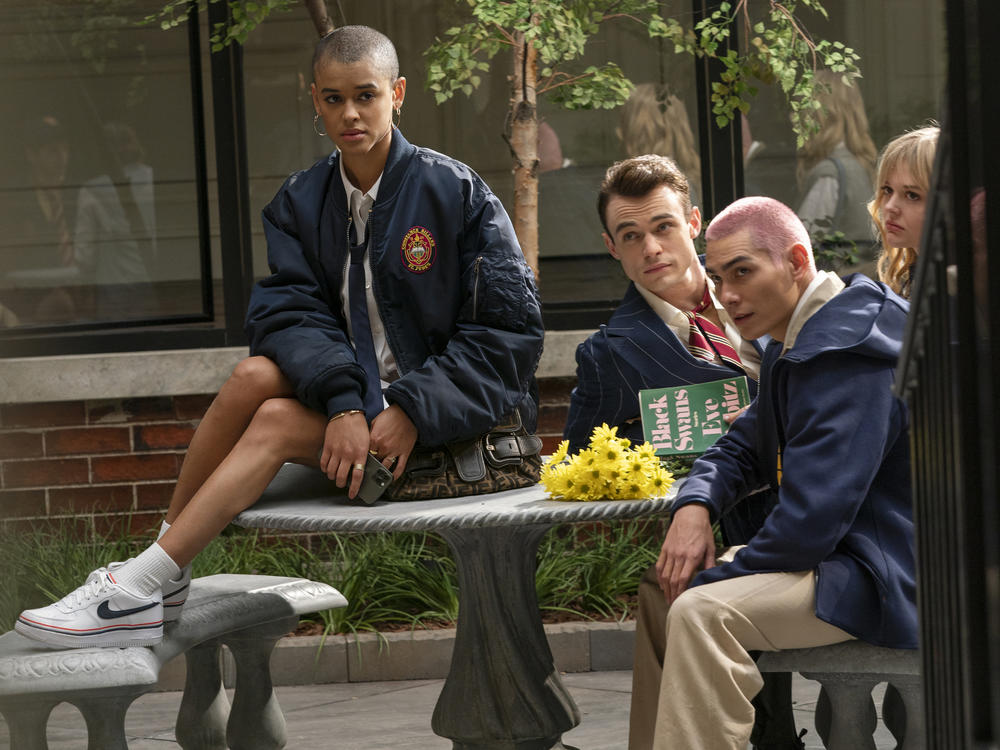 It's harder to make than it looks, the good trash.

The good trash is scandalous, full of panache, eminently watchable, and light as a feather. It is untethered from boring realities about Carrie Bradshaw's rent, but recognizably based in human frailties like Carrie Bradshaw's inability to pick a good boyfriend over a bad one. It has an internal logic: wrongs are avenged, parties are disrupted, beautiful consenting adults rarely close the door on the possibility of having sex with each other, meanies can have a change of heart if they're really loved, and it only rains when people need to get stuck indoors to dry off naked.

The good trash is not mean, it is not pretentious, and it does not put on airs.

When the CW released a series of ads before Gossip Girl's second season in 2008 that showed people in various passionate embraces and gleefully highlighted press blurbs of the show as "a nasty piece of work," "every parent's nightmare," and "mind-blowingly inappropriate," the network was saying one very simple thing. It was saying: Join us, won't you? For we are the good trash.

The irresistible pull of Gen-Z updates

Gossip Girl was of its time: a plunge into a world of rich New York high school students in the early days of social media — it debuted the same year as the iPhone, and its hook was a blog (a blog!) written by the titular and anonymous "Gossip Girl" that tracked and reported on the goings-on among the high-status Blair, Serena, Dan, Nate, Chuck, and their aspirational hangers-on and detractors. It made stars out of Blake Lively and Penn Badgley, among others. It was quintessentially millennial good trash.

And now, HBO Max — which also has all six seasons of the original GG — has undertaken a sequel, a Gen-Z sequel, defined in part by some laudable intentions. The original Gossip Girl had a lot going for it for the audience it reached, but it was very white and very straight, which is blessedly not what television aimed at younger viewers looks like anymore.

This is certainly not the first effort, nor will it be the last, to port an old property into a generationally different setting, and the record of success and failure is spotty and unpredictable. Around the same time as Gossip Girl, there was even a reboot of Beverly Hills, 90210, one of GG's spiritual ancestors, which lasted for several seasons, but lacked GG's impact. But the rebooted One Day at a Time was great, and it met that desire to broaden the world you saw in the original, incorporating not only a Latinx family, but a queer teenager and her nonbinary significant other. The new Saved by the Bell was pretty good, too — certainly better than a lot of critics expected it to be.

But the impulse to do these generational updates is not enough.

The presence of smartphones, Black students and bisexuality doesn't solve story problems; it creates broader and better paths to follow, which don't matter if you don't travel them. And what's lacking here is any coherent and compelling story for these kids to cover on the group text. When people wonder why reboots keep happening, it's this kind of project they have in mind: an update for an update's sake, an intellectual-property extension that lacks a clear creative impulse.

The "comedy" that isn't a comedy

It's a well-worn criticism to say a show doesn't know what kind of show it's trying to be, but in this case, it's a pronounced problem. Showrunner Joshua Safran, who also worked on the original GG, told Variety that he wanted to the new show to be more diverse, but also more straightforwardly and intentionally funny. He even called it a comedy.

It's ... not a comedy. Only one element plays like comedy: a knot of miserable teachers tired of being tormented by, and at the mercy of, their spoiled students (still at the same school, Constance Billard-St. Jude's). Onetime blogging prodigy Tavi Gevinson — who started her fashion blog Style Rookie when she was 11, the year after Original Gossip Girl (OGG?) premiered — plays the teacher the helm of this pack, and she's terrific. This part is a comedy.

But the students are in a completely different show, a melodrama full of weak characterization and fizzling reveals. That show is an absolute mess.

The center of the student universe is Julien (Jordan Alexander), a glamorous 16-year-old influencer so famous that her friends Luna and Monet (Zion Moreno and Savannah Smith) are content to flit around her, touching up her makeup or checking her lighting as she sits imperiously on the steps of the school, waiting to do her Insta story. We meet Julien and her "friends" on the first day of school, which is also the first day of school for Zoya (Whitney Peak), a 14-year-old freshman attending on an arts scholarship. Julien and Zoya share a mother; Mom at some point left Julien's dad to be with Zoya's dad, and the girls have never had a relationship, because their fathers hate each other.

The relationship between the girls is meant to be the backbone here, as the Blair-Serena rivalry was on OGG, but the way it unfolds makes no sense. There are reveals about it that don't reveal anything anyone would care about, and Julien's behavior around her friends as she tries to bring her sister into her "friend group" is inexplicable. (I don't know how realistic it is for rich teenagers to speak of their own "friend group" with this kind of puffed-up reverence, but the way these girls in particular do it makes them sound like 45-year-old matrons discussing tennis club memberships.) 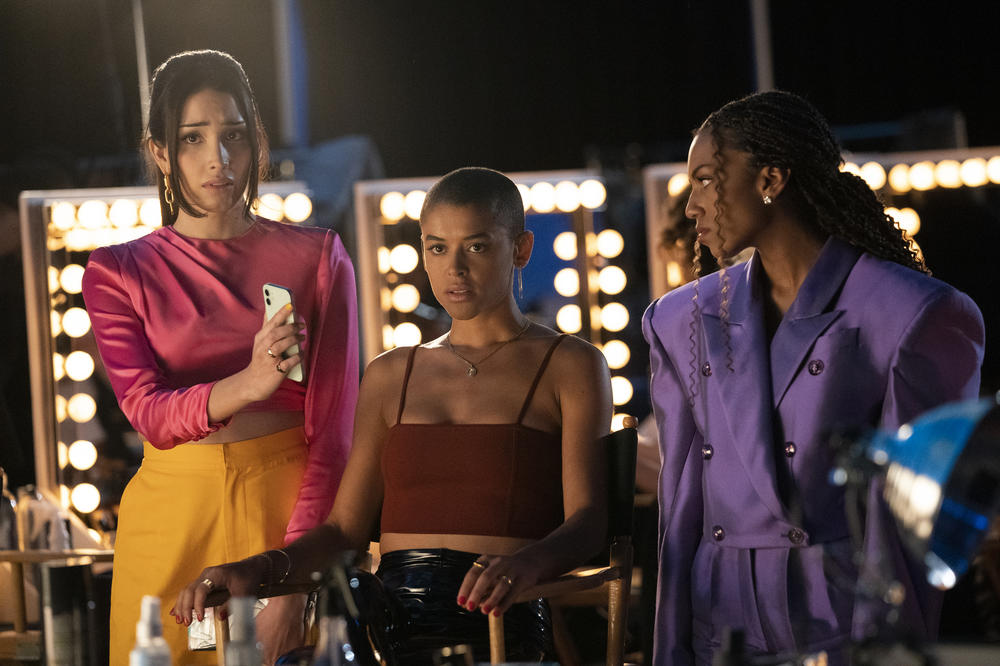 Just, you know, some 16-year-olds hanging out. (Zion Moreno, Jordan Alexander, and Savannah Smith as Luna, Julien and Monet)

The good trash can be nonsensical, but not in this way — you have to believe that your queen bee is calculating and fiercely in control of her world, not that she hatches poorly-conceived schemes for hazy reasons and flips, with no motivation, between hard-core social throat-cutter and mushy sister who wants to be loved.

Furthermore, there is no indication that either Alexander or Peak means to be funny. There is none; there is not any. They are performing pure teen soap suds, descended from not just OGG but also Dawson's Creek and The O.C. and on and on. The same goes for Eli Brown as Obie, Julien's boyfriend, who will — of course — come between the sisters. (One of whom, you will recall, is ... 14.)

There is humor at times, light and sort of cute, in the story of Audrey (Emily Alyn Lind) and Aki (Evan Mock), a 16-year-old couple that has fallen into a quasi-married sex rut of the sort you might once have seen in a comedy with Elliott Gould or George Segal in it. This is where you can spot glimmers of an arch high-society sex comedy (only with ... teenagers?) that perhaps was the vision.

Audrey and Aki are both close with Max (Thomas Doherty), whose presence is thus far the clearest indication of Safran's (laudable) desire to include queer kids.

Max is also the cleanest transfer of an OGG character from that show to this one: He's basically the Chuck Bass (Ed Westwick). Chuck, a lavishly dressed fellow who attempted two sexual assaults in the pilot before being eventually redeemed in the manner of so many others like him, was bisexual in the novels from which the original series was adapted, but he was almost entirely interested in women on the show. Making Max explicitly queer does open the door to new stories — but then Max's big arc in the first four episodes is regrettably born out of one of the most awful and irresponsible tropes to ever be duplicated across high-school shows to the point where it's also a cliché. It does not, and could not possibly, play successfully as comedy, nor is it a wise direction to go with the most prominent queer character on your show.

This Gossip Girl just ends up feeling off, because the missteps accumulate. Some of it is nuts and bolts, like casting: Alexander — while solid and charismatic in this role — is 27, meaning that even though Julien is 16, you're watching a 27-year-old play a character whose romantic rival is 14. (Peak, who plays Zoya, is 18.) Some of it is the inconsistent building of this world: Zoya is both a threat to Julien and an insignificant nobody, so their dynamic lacks the clarity of, for instance, Serena and Blair's easily understood "we were best friends and then you slept with my boyfriend" premise. (And she's a freshman! Who's 14! You're telling me these older girls who brag about owning the school would be spending their time worrying about her?)

There is, too, a sense of missed opportunity: Even though this is a more racially diverse set of characters, the fact that Julien's mother left her father, who is white and rich, for Zoya's father, who is Black and not rich, isn't addressed as part of the fundamental dynamic between these characters. Nor is the fact that these students of color are firmly in control of the fates of their mostly white teachers.

But wait, who's "Gossip Girl"?

It would be unsporting to reveal how, but they do at least dispense here with the whodunit about who's writing the "Gossip Girl" social media posts. This is a smart choice, although it's still part of a clumsy execution of the critical online elements of the story.

Gossip Girl's social-media world is Instagram, and showing nearly every major plot point happening while people look at their phones earns points for verisimilitude, but none for dramatic effectiveness. It doesn't matter whether today's Ocean's Eleven would be planned on Zoom or today's Before Sunrise would just be a bunch of texts; those would not be good movies. And here, you get build after build to Instagram moments that don't seem important enough for a social-media-savvy teenager to be scandalized by. Especially if they had the "darling, I just can't, I've seen far too many Ibsen revivals already, and I really must go to yoga" super-jaded-Manhattan-divorcee energy of these people.

It seems so right to make a Gossip Girl sequel set in a time where television is so different, where social media is so different. But the creative team seems to have stumbled on the basics of assembling characters whose relationships and motivations seem grounded in anything human — which, by the way, would matter even if this were a comedy. None of these characters seem to like each other, none of them have chemistry with each other, and none of their relationships feel lived-in.

Representation only begins with casting; it has to continue through to building characters into the unforgettable people an audience wants to stay with for years. The ups and downs, the storm and the calm, the love and the hate — that's what this show needs, and the opening episodes just aren't there yet.

They're not giving off the unmistakable cheap sparkle of that rare treat: the good trash. 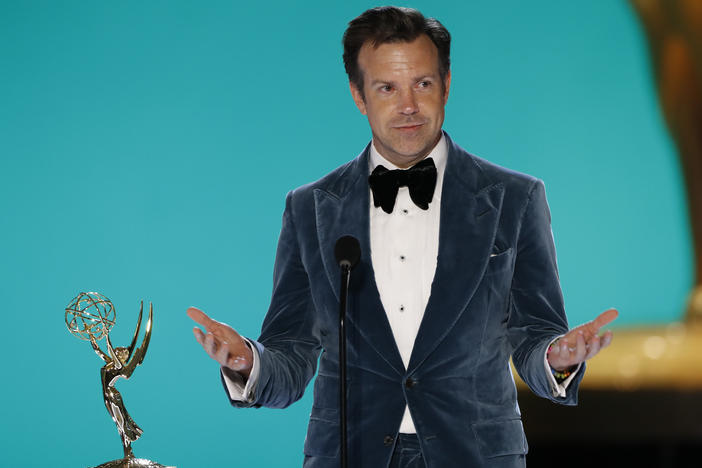 The Crown, Hacks, Ted Lasso and The Queen's Gambit all did well on Sunday night. But the Emmys also laid bare the problems with production and representation that plague nearly every awards season. 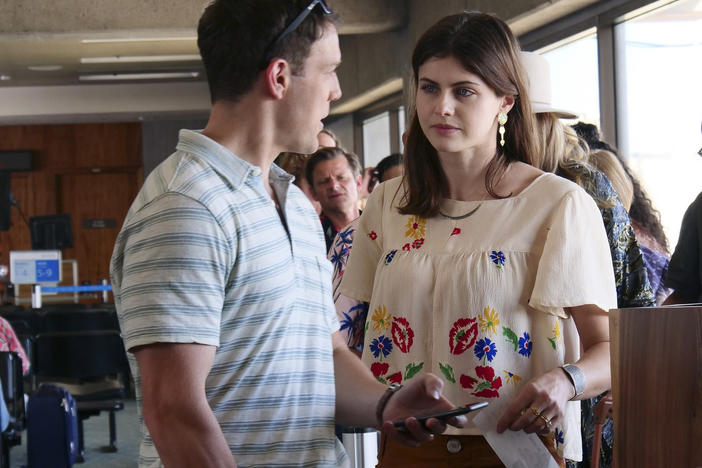 HBO's The White Lotus had plenty of vitriol for its rich guests throughout the series. But it wasn't until the final episode that creator Mike White unleashed his most painful skewerings. 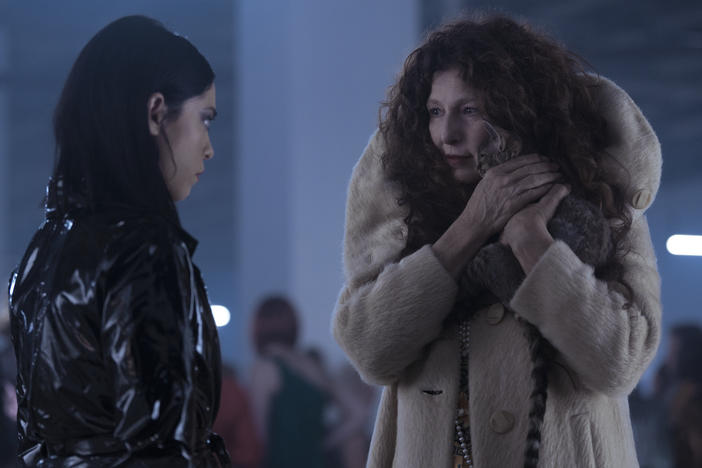 The trippy Netflix series about a student filmmaker who uses dark magic to get revenge on a sleazy producer borrows heavily from Cronenberg and Lynch, but tells a weird, gruesome tale all its own.