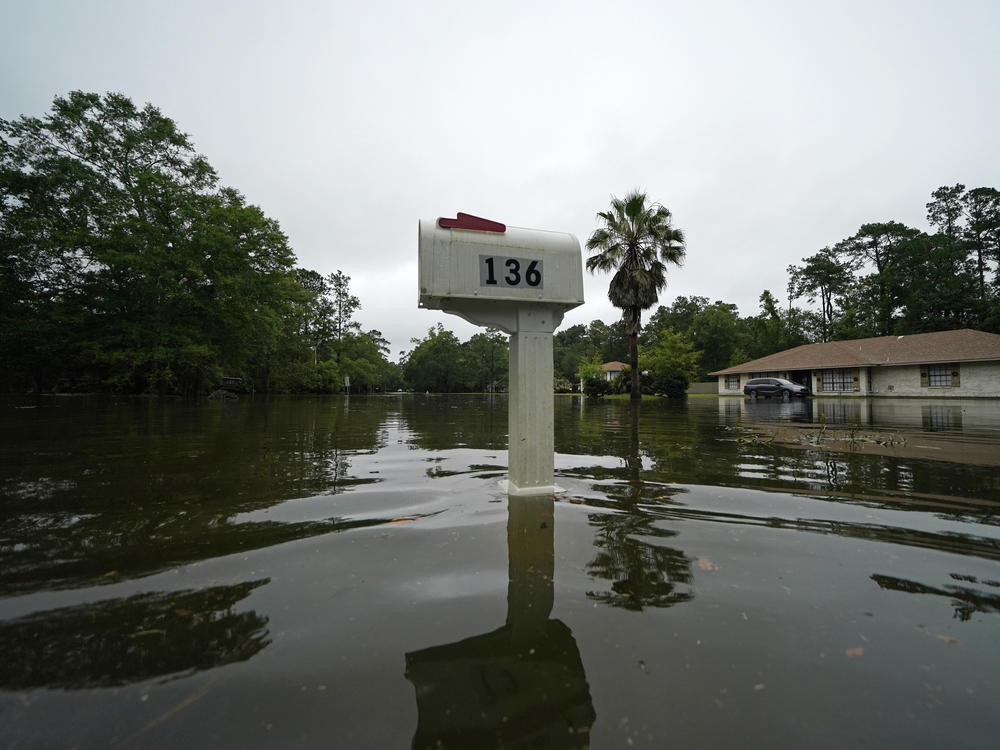 A flooded neighborhood is seen after Tropical Storm Claudette passed through in Slidell, La., Saturday, June 19, 2021.

Ten people, including nine children, were killed Saturday in a 15-vehicle crash about 35 miles (55 kilometers) south of Montgomery on Interstate 65, according to Butler County Coroner Wayne Garlock.

He said the vehicles likely hydroplaned on wet roads, with eight children, ages 4 to 17, killed in a van belonging to a youth ranch operated by the Alabama Sheriffs Association for abused or neglected children. A man and a 9-month-old baby died in a separate vehicle. Multiple people were also injured.

Meanwhile, a 24-year-old man and a 3-year-old boy were killed when a tree fell on their house just outside the Tuscaloosa city limits Saturday, Capt. Marty Sellers of the Tuscaloosa Violent Crimes Unit told The Tuscaloosa News.

The deaths occurred as drenching rains pelted northern Alabama and Georgia late Saturday. As much as 12 inches (30 centimeters) of rain was reported earlier from Claudette along the Mississippi Gulf Coast.

Flash flood watches were posted Sunday for northern Georgia, most of South Carolina, the North Carolina coast and parts of southeast Alabama and the Florida Panhandle. A tropical storm warning was in effect in North Carolina from the Little River Inlet to the town of Duck on the Outer Banks. A tropical storm watch was issued from South Santee River, South Carolina, to the Little River Inlet, forecasters said.

The eight girls killed in the van were returning to a youth ranch operated by the Alabama Sheriffs Association near Camp Hill, northeast of Montgomery, from a week at the beach in Gulf Shores, youth ranches CEO Michael Smith told The Associated Press. He said the director of the Tallapoosa County ranch survived the crash and was hospitalized in Montgomery. At least one of the dead was a child of the director, Smith said.

"This is the worst tragedy I've been a part of in my life," said Smith, who was driving Sunday to Camp Hill to talk to the remaining residents, who had returned from Gulf Shores in a separate van and did not see the wreck.

"Words cannot explain what I saw," Smith said of the accident site, which he visited Saturday. "We love these girls like they're our own children."

Garlock said the location of the wreck is "notorious" for hydroplaning, as the northbound highway curves down a hill to a small creek. Traffic on that stretch of I-65 is usually filled with vacationers driving to and from Gulf of Mexico beaches on summer weekends.

"Butler County has had one of the most terrible traffic accidents," county Sheriff Danny Bond wrote on Facebook, adding: "I believe is the worst ever in our county."

The Tallapoosa County school system said counselors would be available Sunday at Reeltown High School, where some of the ranch residents were students. Smith said the ranch, which is Christian-based, would likely have a memorial service later, asking for prayers as he began to cry.

Top winds remained near 30 mph (45 kph) on Sunday. National Hurricane Center forecasters predicted Claudette would strengthen back to tropical storm status Monday over eastern North Carolina before heading out to sea in the Atlantic Ocean.

More than 20 people were rescued Saturday by boat due to flooding in Northport, Alabama, WVUA-TV reported. The Tuscaloosa County Emergency Management Agency tweeted that local Red Cross volunteers were on hand to help those who were affected. A shelter was opened in Northport.

The center of Claudette's disorganized circulation was located about 15 miles (20 kilometers) east-northeast of Atlanta on Sunday morning. It was moving east-northeast at 17 mph (28 kph), the National Hurricane Center said.

Claudette was declared organized enough to qualify as a named tropical storm early Saturday morning, after the storm's center of circulation had come ashore southwest of New Orleans.

Shortly after landfall, a suspected tornado spurred by the storm demolished or badly damaged at least 50 homes in a small town in Alabama, just north of the Florida border.

Sheriff Heath Jackson in Escambia County said a suspected tornado "pretty much leveled" a mobile home park, toppled trees onto houses and ripped the roof off of a high school gym. Most of the damage was done in or near the towns of Brewton and East Brewton, about 48 miles (77 kilometers) north of Pensacola, Florida.

"It kind of affected everybody," Jackson said. "But with those mobile homes being built so close together it can take a toll on them a lot more than it can on houses that are spread apart."

Damage from the storm was also felt in north Florida, where winds — in some cases reaching 85 mph (137 kph) — caused an 18-wheeler to flip on its side.

The storm also dumped flooding rains north of Lake Pontchartrain in Louisiana and along the Mississippi coast, inundating streets and, in some areas, pushing water into homes. Later, the storm was drenching the Florida Panhandle and, well inland, a broad expanse of Alabama.

Forecasters said the system could still dump 2 to 4 inches (5 to 10 centimeters) of rain in the region, with isolated accumulations of 8 inches (20 centimeters) possible.

Separately, Tropical Storm Dolores made landfall on Mexico's west coast with near-hurricane force. As of Sunday morning, it had dissipated over Mexico. Its remnants had maximum sustained winds of 25 mph (35 kph), and it was centered about 170 miles (275 kilometers) east of Mazatlan, Mexico.

Heavy rainfall totals up to 15 inches (38 centimeters) were expected across the southwest and western coastal areas of Mexico throughout the weekend. Forecasters were warning of the potential for flash flooding and mudslides. 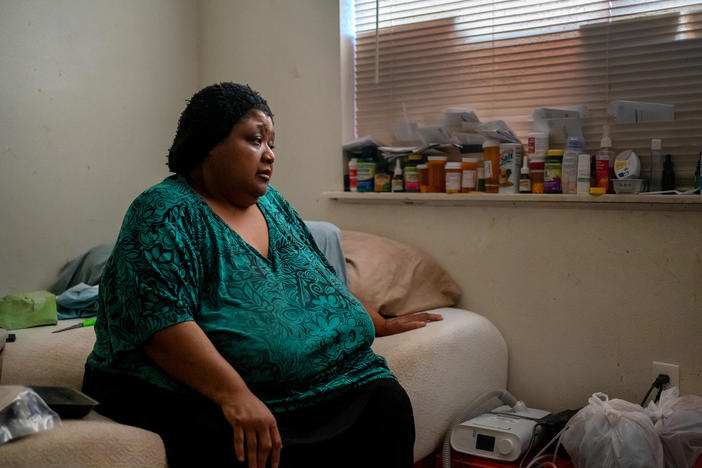 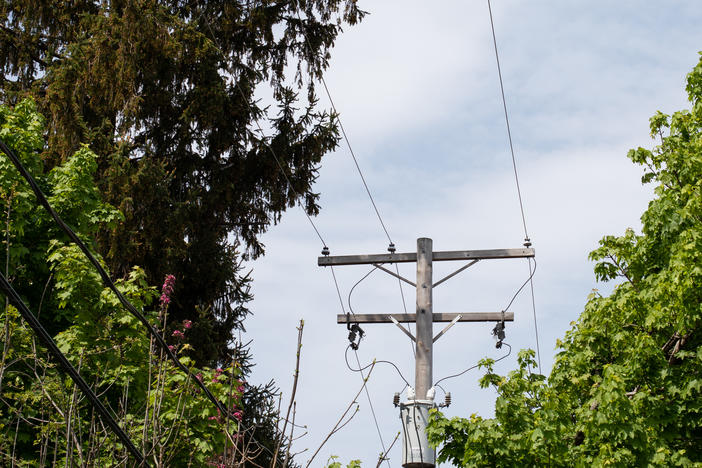 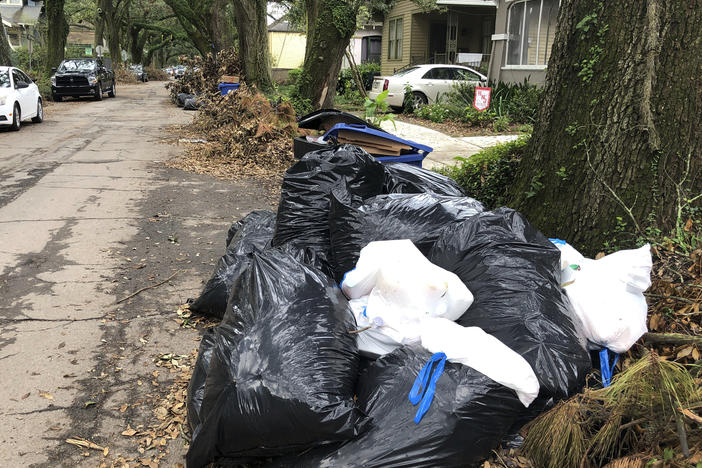 Weeks-Old Garbage Is Stinking Up New Orleans. Residents Had A Trash Parade In Protest

In New Orleans, some residents are still living with the trash from Hurricane Ida, more than three weeks after the storm. Residents and city officials are outraged at the delays in trash pickups.