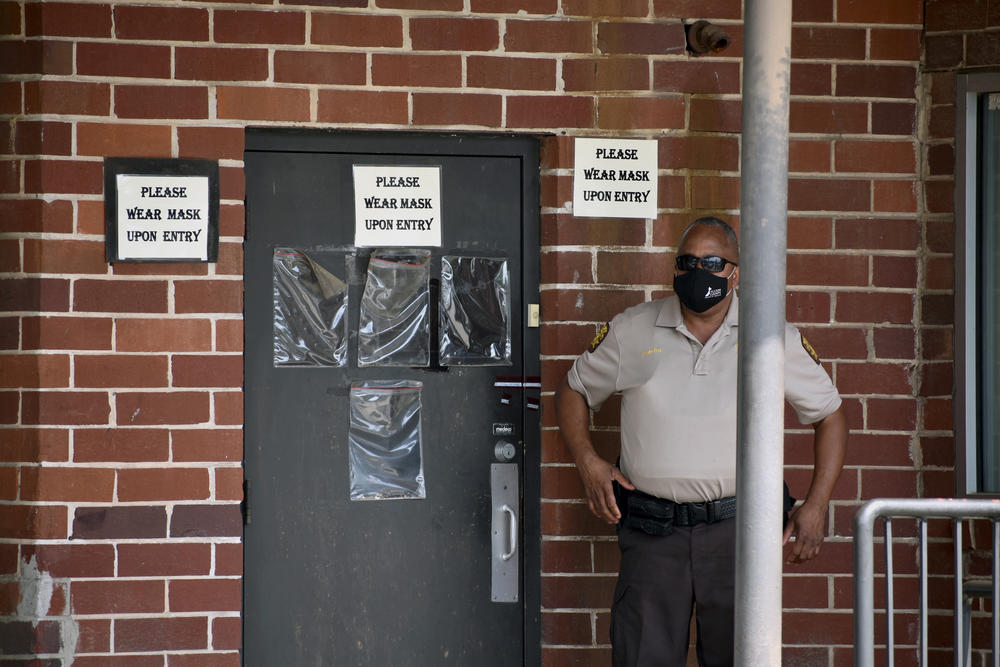 A Fulton County Sheriff's Deputy guards the entrance to the county's election preparation warehouse after an alarm elsewhere in the building was triggered over the weekend.

The Fulton County Sheriff's office is investigating why an alarm went off over the weekend at a warehouse that stores election equipment, the latest bizarre twist in an ongoing lawsuit seeking to prove thrice-counted absentee ballots were marred by fraud.

But Fulton officials say the actual facility rooms that are holding ballots from November's presidential election is and has been secure. The investigation into what happened should be wrapping up soon — including a look at whether two off-duty officers hired as private security by plaintiffs in the suit were trespassing by entering the building.

A planned meeting to discuss parameters of potential inspection was abruptly canceled after all three defendants in the case filed motions to dismiss.

Since reports of the alarm trickled in late Saturday, the information void has been filled by conspiracy-minded media outlets and others who already believe Georgia's most populous county committed voter fraud at a scale that caused former President Trump's narrow defeat.

Emerald Robinson, the White House Correspondent for right-wing media outlet Newsmax tweeted Saturday night that an attorney on the lawsuit said "the building was found left wide open and unattended" and posted a picture that appeared to be an open outer loading dock door at the English Street warehouse in Atlanta.

"This is a picture is [sic] that the attorney provided of the door left open at the supposedly secure building were [sic] the ballots are being kept," she tweeted.

Right-wing media outlets like Conservative Destruction Media, the Gateway Pundit and The Conservative Treehouse quickly aggregated the tweet and suggested something malevolent was at play.

"The Democrats must be really scared," a Gateway Pundit article read. "God only knows what they are up to now."

However, the reality of the situation was different.

Bob Cheeley, attorney for two of the nine people suing over access to Fulton's absentee ballots, said he hired a private security company to watch the Fulton elections warehouse after a Henry County judge ordered that the ballots would be unsealed.

On-duty Fulton County Sheriff's deputies were also assigned to watch the warehouse 24/7, but Sheriff Patrick Labat said Tuesday there was no court mandate to do so.

Cheeley said that Saturday around 4 p.m., the Fulton deputies left the warehouse parking lot, and about 20 minutes later an alarm went off inside the Fulton County Election Preparation Center. Two off-duty Douglas County Sheriff's officers in uniform and a marked patrol car — identified in an email to Cheely posted by Robinson as Deputy Lewis Fredenburg and Lt. Terrance Dukes —  then approached the warehouse and found the outer door unlocked.

The officers opened it themselves, and it was not "left wide open" as the Newsmax personality claimed, and Labat said there was video evidence that showed the off-duty officers opening the heavy door before checking inside the hallway. All other doors to the facility were locked and the rooms with ballots were not disturbed.

"I am 3,000% confident that the ballots are secure," Labat said at a Tuesday press conference. " And there is no question about that." 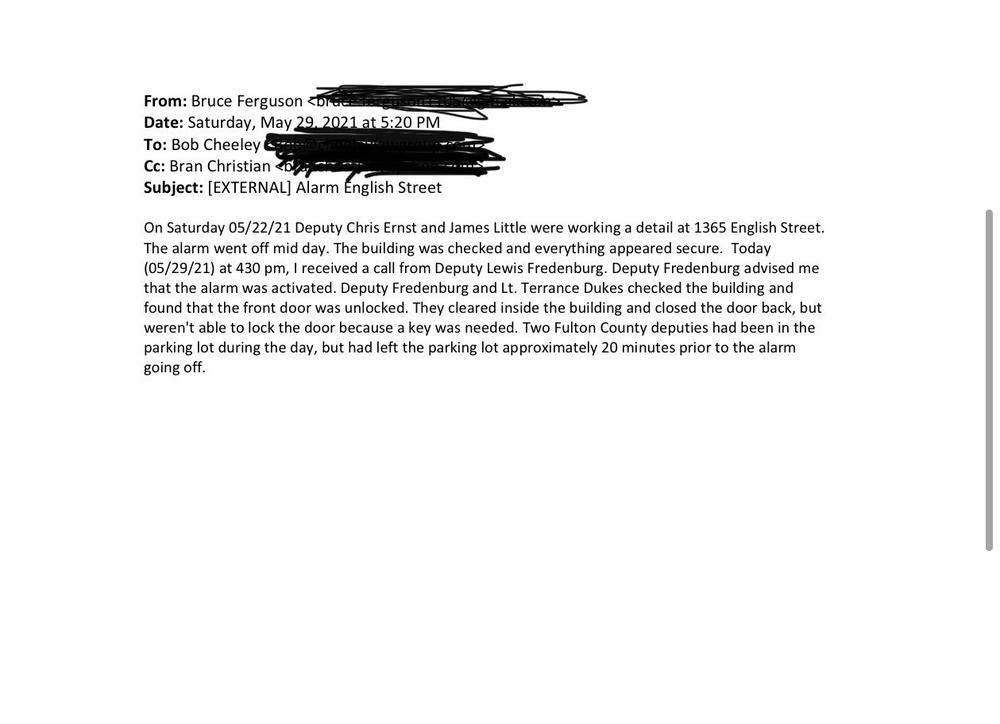 After a Fulton County courts employee locked the door Friday afternoon on their way out, a different employee who had re-entered the building to use the bathroom left but did not have a key, according to multiple sources briefed on the situation but not authorized to speak on the matter publicly.

This timeline for the door being unlocked matches up with statements from Cheeley, who said in an email he believed that the door was unlocked from Friday at 4 p.m. until Saturday at 8 p.m.

The source of the alarm was a motion detector in an upstairs office belonging to the Clerk of Superior Court in the warehouse, and the county said a test showed that alarm is audible from where the private security officers were stationed off property.

That alarm notified 911, and it is unclear what Fulton police's response to the call was. Labat declined to comment at the press conference.

Fulton County Commission Chairman Robb Pitts said because of the ongoing litigation that officials could not answer more questions about the apparent false alarm, but expressed confidence that when the investigation was over "it will put the issue to rest."

Former President Trump, who unsuccessfully tried to overturn his election defeat in Georgia and other states, issued a statement over the weekend urging "Republicans and Patriots" to show up to the warehouse and protect it, continuing to push false claims of fraud.

"We must not allow ANYONE to compromise these ballots by leaving the building unsecured, which was done late Friday," he said about the Saturday incident that did not actually see the ballots left unsecured. "The Left talks about election security but they do not practice what they preach because they are afraid of what might be found."

While the outer door was left unlocked for about 24 hours and it appears Fulton County officers that were supposed to guard the warehouse left before replacements arrived, there is no evidence that any of the inner doors to the warehouse were compromised or the elections warehouse alarm went off.

There is also no evidence of fraudulently made or cast ballots within the 147,000 mail-in votes in Fulton from the November election, which were counted three separate times, including once by hand.

The next hearing in the ongoing lawsuit is set for June 21.

This story was updated at 5:40 p.m. with more comments from a Fulton County press conference. 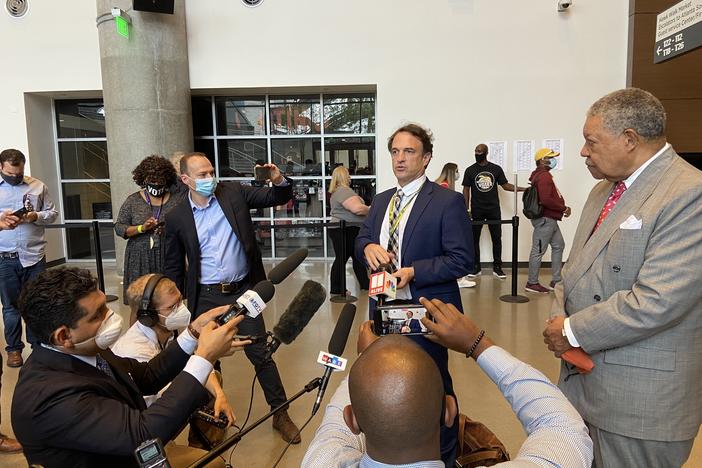 The beleaguered election official will resign at the end of 2021 after eight years.