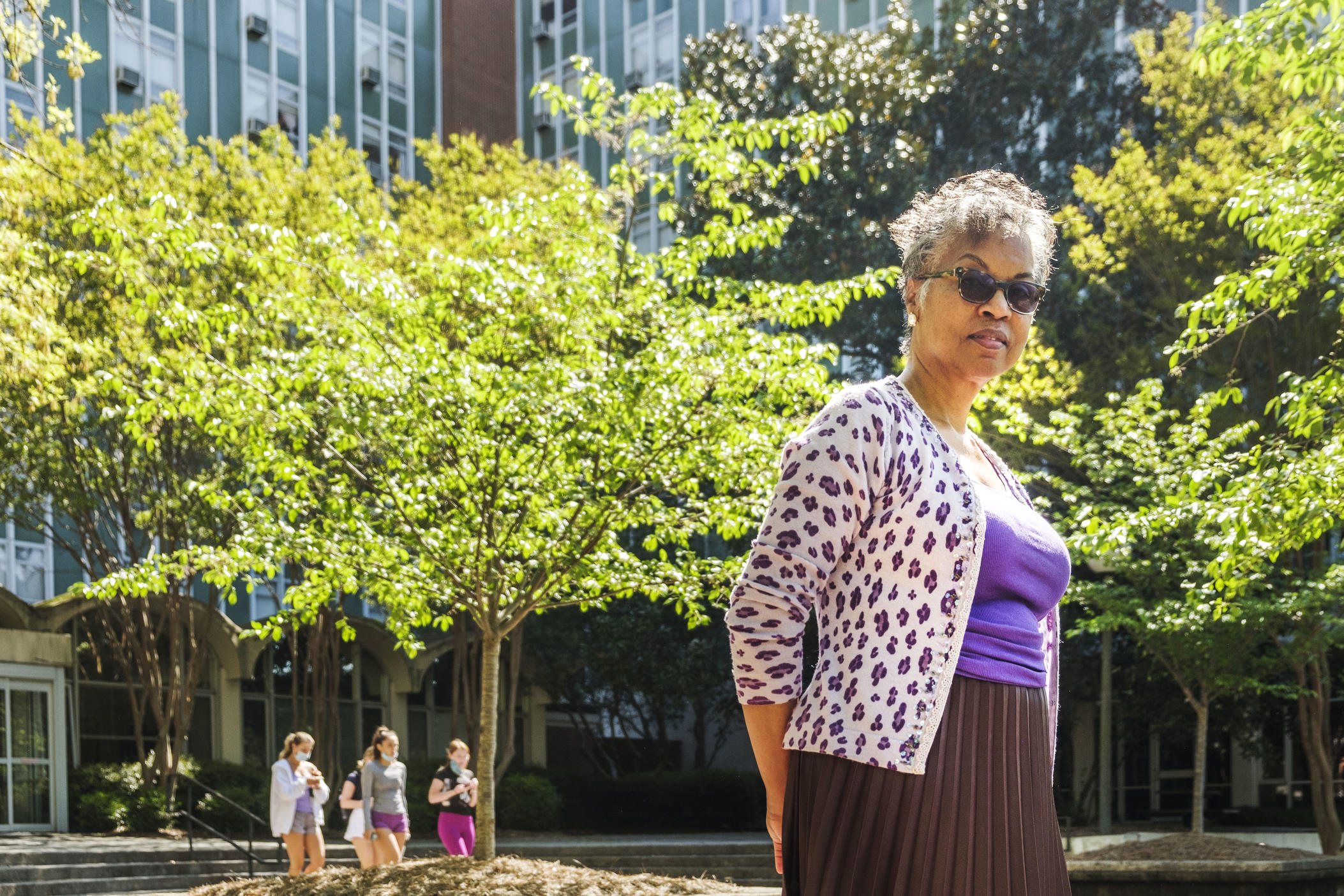 Caption
Hattie Thomas Whitehead stands in the courtyard of Creswell Hall on the University of Georgia campus, mere feet from where the shotgun house she was raised in once stood. Thomas Whitehead and others with connections to the Athens neighborhood of Linnentown have won a kind of reparations for the neighborhood's erasure in the mid-20th century to build the student dorms.
Credit: Grant Blankenship/GPB

Head to Athens on a weekday between September and May, and students will likely be flowing down Baxter Street from high-rise dormitories at the top of the hill toward the University of Georgia campus.

Young people have lived in each of the three nine- or 10-story towers on the hill — Creswell Hall, Brumby Hall and Russell Hall — for decades.

When Hattie Thomas Whitehead was young, she lived here, too.

“When I was a little girl, this was dirt,” Thomas Whitehead said while giving a tour of her old neighborhood recently, referring to Finley Street, which runs between Creswell and Russell. “It was not paved.”

That was the 1950s, when the area south and west of the intersection of Baxter Street and Finley Street was a predominantly Black neighborhood called Linnentown.

That changed in the early 1960s, when the University of Georgia and the city of Athens looked at Linnentown and saw space to add dormitories for the growing university.

What followed was a textbook example of the sorts of mid-20th century infrastructure projects called, somewhat euphemistically, urban renewal.

In neighborhoods outside white power structures, urban renewal led to economic loss. But now Linnentown residents and their descendants have won recognition and, in a first for any Georgia community, a promise of reparations for what they endured when the neighborhood was erased.

“But you got to remember that most of the people in this area, it took them years to accumulate enough money to get to be homeowners,” Thomas Whitehead said.  “It took them years.”

The city used eminent domain to first acquire and then demolish those homes. When residents were paid for their loss, records suggest they only got about a third of market value. And Thomas Whitehead said the city would use the vacant homes to send unmistakable messages to the families left behind that it was time to move out.

“In some instances, they had the heavy equipment started up at 12 o'clock at night,” she said.

Once the bulldozers were rumbling in the dead of night, Thomas Whitehead said, they would push in the vacant homes. Or the fire department would burn the homes down, she said.

All of which, she said, was terrifying.

Thomas Whitehead's father was one of those homeowners who had saved for years, in this case to get the family out of their rented shotgun house in Linnentown into something they could call their own. But that second house was also in the urban renewal zone, up on Peabody Street. It, too, was lost to eminent domain. 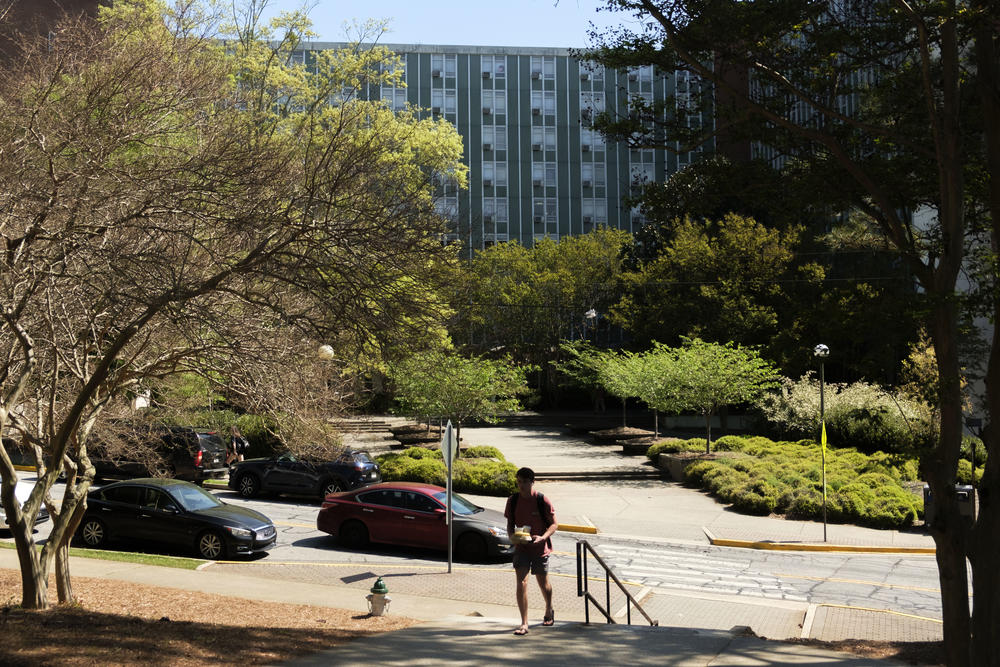 Creswell Hall, pictured, and three other high-rise University of Georgia dormitories stand today on what was once the Black, working class neighborhood called Linnentown.

The house Geneva Johnson lives in today was actually trucked from Linnentown across the Oconee River to east Athens into what is now Athens-Clarke County Commission member Mariah Parker’s district.

“Like, you could hear it in Ms. Johnson's voice, talking to her over at the gas station,” Parker said. “Her voice would shake when she would talk about this thing that's happened, you know, 50, 60 years ago.”

Since that conversation, former Linnentown residents have worked with the Athens-Clarke County Commission’s Justice and Memory project. It is aimed at undoing some of the damage of the urban renewal period.

From that relationship came a proposed resolution acknowledging not only the economic damage done to Linnentown but putting a name to the tactics used to force residents out.

The names? Terrorism and white supremacy.

That posed a problem for Commissioner Russell Edwards. He is used to being a dealmaker between the local government and UGA, which is far and away the economic engine of the community.

“And a lot of my colleagues similarly looked at it sort of pragmatically,” Edwards said. “And so the pragmatic hang-ups were, 'OK, If we pass this document, we will be alleging that the University System of Georgia, the University of Georgia, has committed an act of white supremacist terrorism.'”

And that, Edwards feared, would hold up progress. So he wanted to soften the language, hammer out a compromise with UGA, just to make something good happen for the Linnentown community.

Meanwhile, Commissioner Parker said UGA seemed most interested in avoiding talking about Linnentown at all.

“They have refuted the claim that Linnentown was a Black community,” Parker said. “And then refuted any claims of wrongdoing to us in an email, I think shortly after discussions began publicly about what happened in Linnentown.”

Linnentown residents would not budge on the resolution’s language. They wanted the fear and trauma they lived through to be recognized.

“And that,” Edwards said, “was an unorthodox approach.”

But as Edwards reflected on what Thomas Whitehead and others had told him about losing their homes, of houses being demolished in the dead of night and walking away with nothing to show for it, his thinking shifted.

“I just came around and finally said, ‘You know, I can try to caress this all I want, but the fact remains that this was a terrorist act,’” he said.

Neither the University of Georgia nor the Board of Regents have commented publicly on the Linnentown resolution. But when it unanimously passed the Athens-Clarke County Commission, terrorism and white supremacy in Linnentown became a matter of public record.

The residents and their descendants want cash reparations. Georgia law around gratuities prohibits that, so instead they will steer something called participatory budgeting. An amount of money to be determined by an economist working in the field of reparations will be set aside and then spent in Athens where the residents deem best.

Thomas Whitehead has some ideas.

Already, though, her ideas of pulling funds to give people help with rent deposits, or to pay for home upkeep, are running up against the same law that prohibits the county from paying her directly for what her family lost. The participatory budgeting will take a new kind of finesse.

“One of the things that we are asking is for a Black history center," Thomas Whitehead said, and, before that, a Linnentown historic marker in front of Creswell Hall on Finley Street, mere feet away from the spot where young Thomas Whitehead lived as a girl.

The Board of Regents hasn’t said if it will allow such a marker on school property, but Athens-Clarke County has enough rights of way along Finley Street that the university system may not have a say in the matter.

And truth matters to Thomas Whitehead.

"That would tell the whole truth, right?" she said of the center and marker. "Not part of it, not pieces of it, but all of it.” 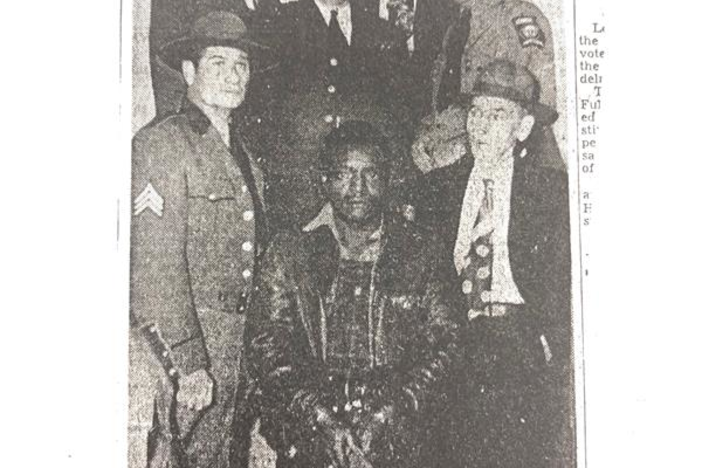 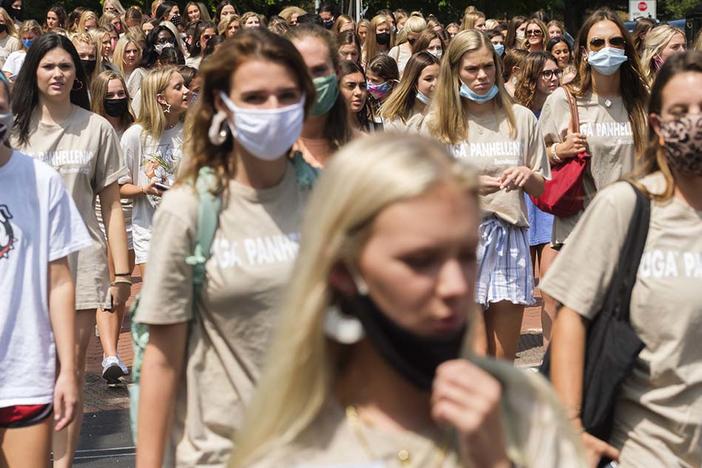 'It Is What It Is:' UGA Students Make Do Amid Historic Pandemic

Students took part in sorority rush, pulsing through the student center in tightly packed groups of what looked like a hundred at a time. Others played basketball near dorms. Across the University of Georgia, the realities of college life amid the pandemic were on full display.