The European Medicines Agency says there is a possible link between the AstraZeneca COVID vaccine and rare blood clots.

The European Union's drug regulator today said there's a possible link between AstraZeneca's COVID vaccine and rare, but sometimes fatal, blood clots. The AstraZeneca vaccine has already been administered to tens of millions of people. It's on track to be the most widely used vaccine in the world this year. NPR's Jason Beaubien joins us with more.

SHAPIRO: What exactly did the European Medicines Agency say today?

BEAUBIEN: So there had been some concerns raised that some people appear to be getting hit with a very rare blood clotting condition in the days following vaccination. And initially, the European drug regulators, they said this rate of a few dozen blood clots was nothing out of the ordinary when you're vaccinating 25 million people. But today, the EMA Safety Committee came out and said, yes, there does appear to be a link. Dr. Sabine Straus was the head of that committee. She says they looked at all the available data on 86 events of these clotting cases that occurred in the days after vaccination by AstraZeneca.

SABINE STRAUS: And we have concluded that there is indeed a possibility of a very rare event that might occur.

BEAUBIEN: They're still saying they don't completely understand what's happening, but this appears to be an immune reaction that they've seen also with a drug called heparin, which is a blood thinner. But the key point here is that they've switched their position now to saying that they think it is plausible that the AstraZeneca vaccine is what's causing these clots.

SHAPIRO: So these clots are very rare, but still very worrying. I mean, what does this announcement mean for the ongoing use of AstraZeneca's vaccine?

BEAUBIEN: They're being very clear, the European Medicines Agency, that their recommendation is that the AstraZeneca shot is safe and effective. You know, since the pandemic began, there have been more than a million deaths from COVID across Europe. Emer Cooke, the head of the European Medicines Agency, she says the benefits of this vaccine far outweigh the potential clotting risks.

EMER COOKE: Vaccination is extremely important in helping us in the fight against COVID-19, and we need to use the vaccines we have to protect us from the devastating effects.

BEAUBIEN: And she says that her agency's position is that countries should continue using AstraZeneca, although it's going to be up to individual countries to decide how and if they use this particular vaccine.

SHAPIRO: And this is not one of the vaccines that's been authorized for use in the United States. Given that it could be responsible for these potentially fatal reactions, what's the plan going forward? How are they going to address this?

BEAUBIEN: So coming out of this Safety Committee meeting, the Europeans are doing a few things. First, they're saying that blood clots now need to be listed as a possible side effect for the AstraZeneca shot. They're telling health care workers and people who've gotten vaccinated to be monitoring for particular symptoms that could be a sign that this is happening. They're ordering the company to do several studies, both going back and looking for possible clots that might have been missed during some of the clinical trials and also to be monitoring for clots as the vaccine gets rolled out further. And they're setting up independent studies at two universities in Europe to try to get a better handle of exactly what's going on with this immune response and what might be done to counter and also to look for ways to screen people ahead of time and maybe steer some people who could be at higher risk to other vaccines.

SHAPIRO: Are some people more at risk of these clotting events than others?

BEAUBIEN: So part of the issue here is that there's a relatively small number of cases. So they are not entirely clear. But they did say that the majority of the cases they were analyzing were women under the age of 60. But they added that there needs to be more study, and they continue to stress how important AstraZeneca is right now in this global immunization effort to get the pandemic under control. 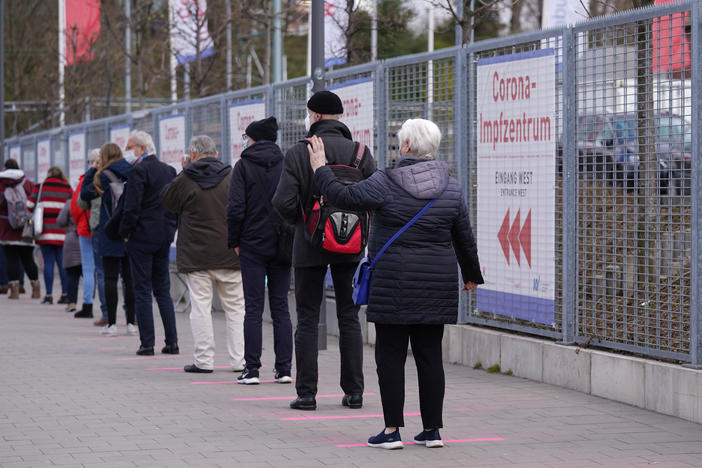 Germany Is Expected To Centralize Its COVID-19 Response. Some Fear It May Be Too Late

The country's scattershot approach, with each of 16 states imposing different regulations, has come under mounting criticism as cases surpass 3 million and hospitals warn they're running out of beds.

Swedish Approach To The Pandemic: Is It Working?

NPR's Sacha Pfeiffer talks with Swedish journalist Emanuel Karlsten about how Sweden's approach to the coronavirus has panned out and what life is like during the pandemic.

Coronavirus cases in Spain are on the rise again. But hospitalizations are down compared with the peak of the pandemic, and patients are younger and have milder symptoms.