Georgia Teachers Glad To Get Vaccine But Pandemic Leaves Some Dispirited 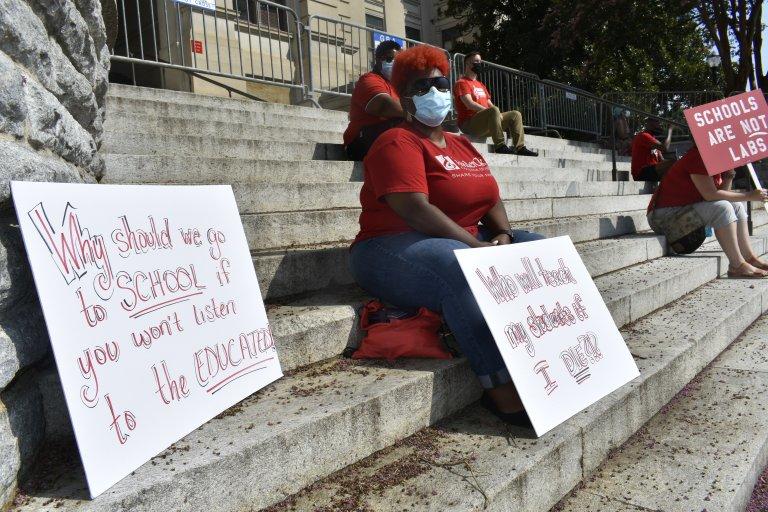 Cobb County teacher Chantae Pittman took part in a school reopening protest at the Capitol in July. She's relieved Georgia expanded vaccine eligibility to include teachers, but she already made an appointment in Alabama.

The newly eligible people will include adults with intellectual and developmental disabilities and parents of children with complex conditions, or about 1 million Georgians. They will join about 2 million Georgians who are eligible now — people 65 and older, health workers, long-term care residents and staff, and first responders.

Adults under 64 with medical conditions making them vulnerable to the disease could be added later in the month if vaccine supplies continue to increase, Kemp said.

That’s welcome news for Carlos Murrell, a Spanish teacher at North Atlanta High School. Murrell said he does not fault Atlanta Public Schools for its reopening plan, but he was never comfortable going back to the classroom.

Murrell has considered driving to North Carolina, where he is certified to teach, and being vaccinated there. Georgia teachers have been traveling there and to Alabama, Tennessee, and North Carolina to get shots.

“I’m not holding my breath on that March 8 rollout,” she said. “I don’t think that, given the instances of how things have been going as far as COVID testing and all that, I don’t think it’s going to be as efficient as it could be. I would love to be wrong about that, and I will try to get my appointment when it opens up for us on the 8th, but I’m keeping my appointment in Alabama for the 17th, because I don’t see myself getting a vaccine in my home state until then, which is a shame.”

Kemp remarked on the efficiency of the state’s mass vaccine site in Atlanta, where people reported wait times of under five minutes, but not every teacher will be able to get a vaccine in Georgia as soon as they might like, he said.

“We will continue to see more demand than we have supply. Appointments may continue to be hard to find and schedule,” he said. 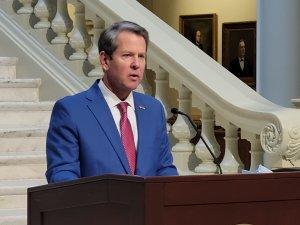 Kemp’s announcement comes after months of intense pressure from teachers, education groups and Democrats to make teachers eligible immediately. Kemp declined to do so, arguing that Georgia’s seniors, who are more likely to become seriously ill or die from COVID-19, needed top priority.

A recent uptick in vaccine supply from the federal government has changed his calculation, he said, as has a new vaccine only requiring one dose. The state has delivered 1.9 million doses to 1.2 million Georgians. About 57% of Georgians over 65 have received at least one dose, he said.

Murrell said he started talking with his doctor about vaccines almost as soon as COVID-19 arrived in Georgia. He’s planning on getting the shot as soon as he is able, but he still resents not being further up on the priority list, as teachers are in at least 28 states.

“I will never, ever recommend for someone to become a teacher,” he said. “I’m disheartened. And I’ve come to realize that I really don’t matter to them. I don’t feel like I actually matter. I feel like what I offer to them is nothing but statistics, even though every day I go into classrooms, and I see young people with minds that need to actually be shaped. I’m being held hostage for my love of children.”

“It’s just really disheartening to realize that I could love something so much and it doesn’t love me back,” he added.

A nationwide survey from the Center for State and Local Government Excellence found Murrell is far from alone.

Public school employees’ general satisfaction with their employers fell from 69% in March 2020, to 44% in October 2020, and 38% of K-12 employees said that working during the pandemic has made them consider changing jobs, as compared to 25% of other government employees, the survey found.

For Pittman, it’s been a struggle to teach children to sing in the age of COVID — rehearsals sound a lot lower this year as all of her sopranos are studying virtually — but she said her school has given her the resources she needs and she counts herself blessed to have a large classroom where students can socially distance, a privilege most teachers don’t have.

“I’m definitely excited to get back to a new normal without masks or the fear of catching COVID and passing away,” she said. “But I’m patient and still hunkering down and building on whatever I need to do to help stop the spread until everybody who wants to get vaccinated can get vaccinated, so we can get this under control.”

Continuing to follow COVID safety guidelines will be important, said Dr. Amber Schmidtke, a public health microbiologist, especially given the results of a statewide survey in which only 45% of school workers said they wanted to be vaccinated.

“It’s important to remember that we’re still going to probably see transmission inside the classroom, knowing what we do from the Marietta City Schools study, that it does happen there,” she said. “And if we’re only vaccinating 45% of the teachers, then this could be an ongoing concern.”

In his announcement, Kemp tied the vaccine program to a push to reopen schools for face-to-face learning.

“Moving forward, we cannot delay full in-person learning any longer,” Kemp said. “Our children cannot afford to wait until fall; the cost is simply too high. Georgians deserve to return to normal as soon as possible, and that will not happen without schoolhouse doors open for face-to-face instruction each and every day.”

Kemp said he does not plan to mandate schools open for in-person instruction.

As of last week, about a dozen of Georgia’s 181 school districts were 100% virtual, with more either on hybrid or offering the choice of in-person for some grade levels.

Offering vaccines to teachers is an important first step, Schmidtke said, but it is not a solution.

“We also need real support for teachers and school administrators when it comes to the prevention strategies that are needed inside the building, things like universal mask-wearing, social distancing, contact tracing,” she said.