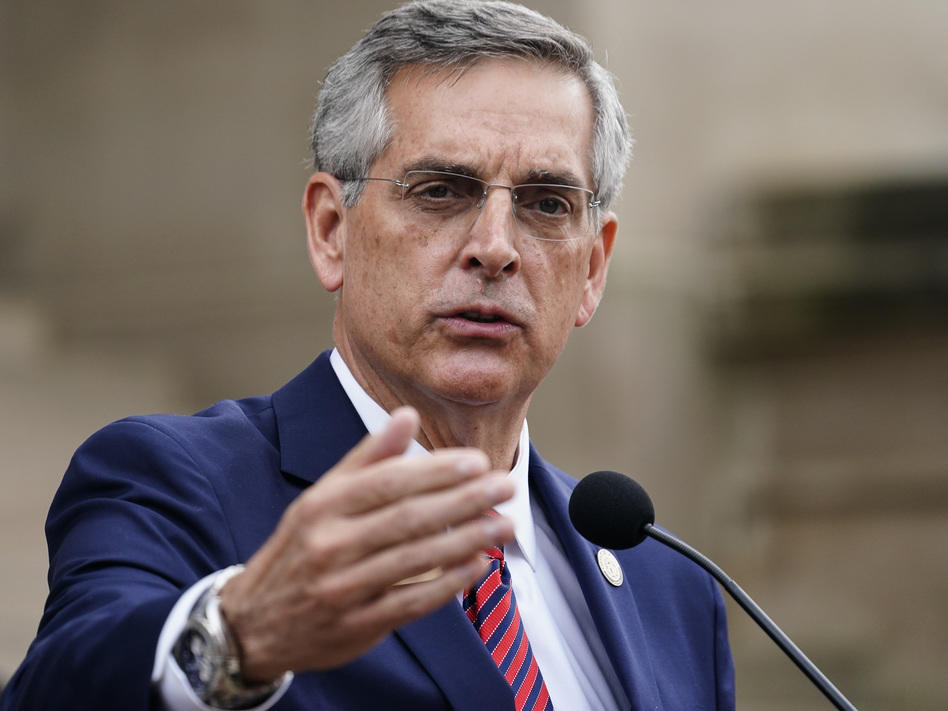 Georgia Secretary of State Brad Raffensperger at a news conference on Nov. 11, 2020, in Atlanta.

For a second time, and after a third count of Georgia's 5 million ballots, Republican Secretary of State Brad Raffensperger said he will take the official steps to confirm Biden's victory by about 12,000 votes.

"It's been a long 34 days since the election on Nov. 3," he said. "We have now counted legally cast ballots three times, and the results remain unchanged."

After the initial count, Raffesnperger ordered that a legally required risk-limiting audit to be conducted on the presidential race. Because of the tight margin of just under 13,000 votes, the audit was conducted by hand counting all 5 million ballots by examining the human-readable text of voters' choices.

Once those results were certified, the Trump campaign filed a request for a recount, sending those 5 million ballots through machine scanners as in the initial count.

Even though the results of the presidential race have remained unchanged, President Donald Trump and other top Republicans have sought to question the election and pushed Raffensperger to overturn the results.

"Disinformation regarding election administration should be condemned and rejected ... integrity matters, truth matters," Raffensperger said. "Today, the secretary of state's office will be recertifying our state's election results. Then the safe harbor under the United States code to name electors is tomorrow, and then they will meet on Dec. 14th to officially elect the next president."

As a dual U.S. Senate runoff looms next month that will decide control of the upper chamber, Trump used a rally Saturday night in Valdosta to continue making false claims that he won Georgia and that there was widespread fraud in the general election — though at times he did remind voters to support Sens. David Perdue and Kelly Loeffler.

"The voters of Georgia will determine which party runs every committee, writes every piece of legislation, controls every single taxpayer dollar," he said. "Very simply, you will decide whether your children will grow up in a socialist country or whether they will grow up in a free country."

"The secret suitcases of magic ballots were actually ballots that had been packed into these absentee ballot carriers by the workers in plain view of the monitors and the press," Sterling said about one claim that Fulton County illegally added more votes in the dead of night for Biden.

Another claim — that voting machines were seized and evidence of a vote-flipping algorithm was found — is not true, either. Sterling called out Republican Rep. Jody Hice for sharing misinformation online.

"I'm frustrated that we continue to see people who are put in positions of responsibility, sending out misinformation and undermining the electoral system," Sterling said.

There are more than one million absentee ballot requests that have been processed for the Jan. 5 runoff, and 1.3 million voted by mail in the November election.

Today is also the deadline to register to vote in the election, which can be done at registertovote.sos.ga.gov. Voters can request an absentee ballot online at ballotrequest.sos.ga.gov and check their registration status, polling place and other voting information at mvp.sos.ga.gov.