Georgia's Republican Senators Call On Secretary Of State To Resign 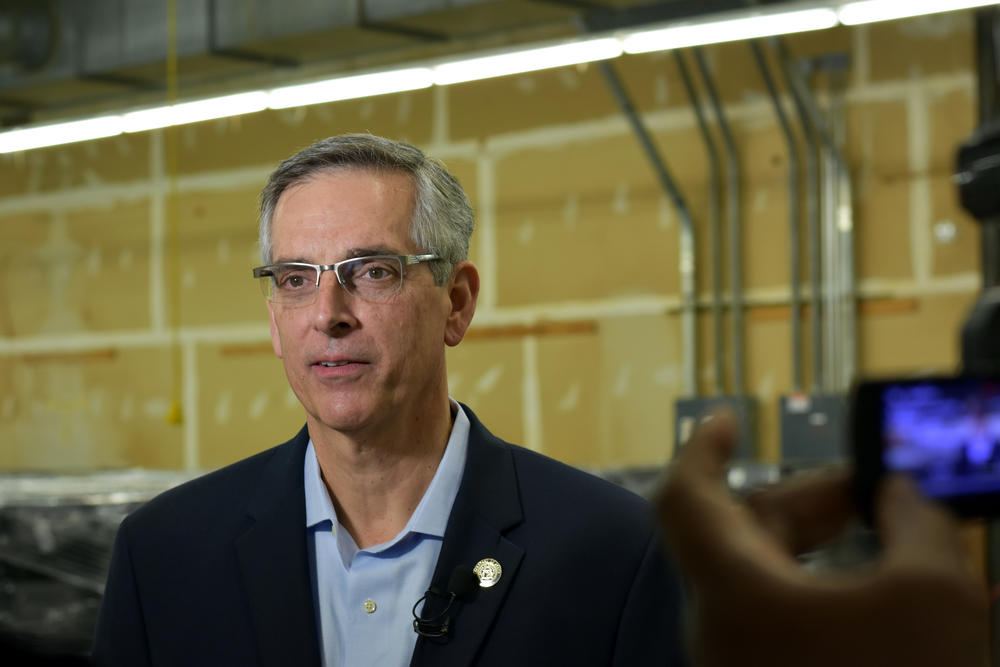 Republican Secretary of State Brad Raffensperger is under fire from both of Georgia's U.S. senators calling for his resignation.

Georgia's two Republican U.S. senators are calling on the state's top election official — also a Republican — to resign Monday, after alleging "too many failures in Georgia elections this year" but without mentioning specifics to support their claims.

Sen. David Perdue and Sen. Kelly Loeffler issued a joint statement that blasted Secretary of State Brad Raffensperger for allowing the management of Georgia elections to "become an embarrassment for our state."

"We have been clear from the beginning: Every legal vote cast should be counted, any illegal vote must not," the statement reads, without any evidence of illegal votes counting in this election. "And there must be transparency and uniformity in the counting process."

Raffensperger's office initially declined to comment but pointed instead to several hours of press conferences conducted in the last week, dozens of press releases sent with the latest outstanding vote totals and numerous interviews about Georgia's election process. A subsequent statement from the secretary blasts Perdue and Loeffler for "laughable" claims about a lack of transparency.

"I know emotions are running high; politics are involved in everything right now," he said. "If I was Sen. Perdue, I’d be irritated I was in a runoff. And both senators and I are all unhappy with the potential outcome for our president. But I am the duly elected Secretary of State. One of my duties involves helping to run elections for all Georgia voters. I have taken that oath, and I will execute that duty and follow Georgia law."

Perdue, who narrowly avoided winning his reelection outright, and Loeffler, appointed to fill her seat when Sen. Johnny Isakson retired, are the latest Republicans to level generic accusations of wrongdoing in elections across the country without providing evidence to support it or a seeming understanding of the process.

"We believe when there are failures, they need to be called out — even when it's in your own party," the senators' statement continues. "There have been too many failures in Georgia elections this year and the most recent election has shined a national light on the problems."

Georgia's June 9 primary garnered national attention for long lines, poll closures and a shortage of poll workers, but investment in training and recruitment plus a shift to early voting led to a relatively smooth Election Day for the November election. Perdue and Loeffler's statements did not describe any particular failures with this election.

Raffensperger's statement said that many problems with election law happen at the federal level and took a subtle dig at the senators' newfound interest in election administration.

"My job is to follow Georgia law and see to it that all legal votes, and no illegal votes, are counted properly and accurately," he said. "As Secretary of State, that is my duty, and I will continue to do my duty. As a Republican, I am concerned about Republicans keeping the U.S. Senate. I recommend that Sens. Loeffler and Perdue start focusing on that."

At press conference earlier today, Gabe Sterling with the secretary of state's office took half an hour to debunk misinformation about Georgia's vote counting process, provided an update on the latest number of absentee, provisional, military and overseas ballots in the state and said all Georgians should have faith that the state's $104 million voting system is correct.