'Ratched' Is Pretty, But Very Silly 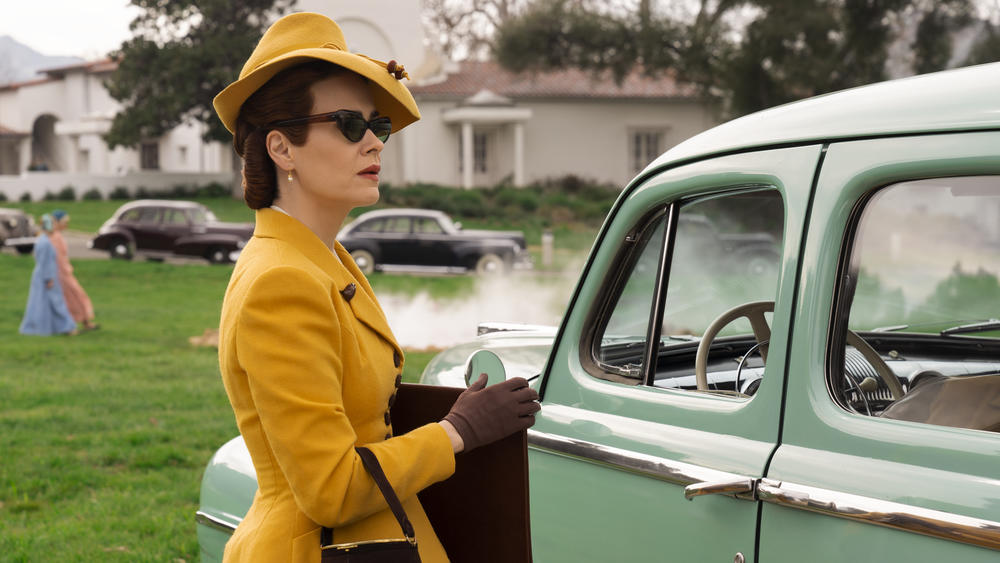 Ratched is beautiful, but it's really bad.

The messy eight-episode first season of the Netflix horror thriller (a second season is on the way) creates a backstory for Nurse Ratched, the heartless villain who has McMurphy lobotomized in One Flew Over The Cuckoo's Nest. Created by megaproducer Ryan Murphy and newcomer Evan Romansky, Ratched succeeds as a compendium of stunning images, but that's about it. As a story, it is nonsensical, self-indulgent and unsuccessful at saying anything about Ratched herself except something along the lines of "people do the darnedest things."

This was probably a doomed project from the start, because Mildred Ratched doesn't need a history and can't be given one without breaking the character's purpose. In Cuckoo's Nest, she is the pitiless and relentless face of the institution and the state. She grinds her patients down simply because she does and because she can and because she believes in rules; that is what makes her frightening. She represents an inhuman and inhumane society in its crushing of the individual, really, so she's not meant to be thought of as a realistic and nuanced person. "How did her childhood make her so mean?" is beside the point when a character represents the absence of individuality and frailty and the surrender of your unique soul. And Ratched does little to answer the questions it poses anyway, so confused is its presentation of the character.

Murphy's creative bond with Sarah Paulson, who has appeared over and over in his series (including American Horror Story and American Crime Story), fails them both here. As Mildred, Paulson seems adrift in a way she has rarely been as an actor, because the way Mildred is written is largely incoherent. At first, we think we are perhaps seeing a sadist in the earliest days of her reign — a woman whose opportunistic brutality isn't yet entirely funneled through her job. But then when the plot demands it, she becomes gentle and helpful, siding with patients in precisely the way she would never do in Cuckoo's Nest. The things that are meant to unlock Mildred's psyche — that she's a lesbian, that she suffered horrible childhood trauma, that she lost her parents very young — are baubles that dot the characterization, but none feel like insights into her behavior. It goes without saying that being a closeted lesbian doesn't cause violence or cruelty, and Murphy surely doesn't mean to suggest it does. But when you set out to give a backstory to a heartless character and this is so much a part of it, it's awfully easy to be misunderstood. Mildred's gentle romance with Gwendolyn (Cynthia Nixon) is likely intended as a tragic grace note, given that we know where all of this is headed and what Mildred's future holds. But these are potent tropes with which to play.

There's a built-in defense against any unease viewers will bump into — a reflexive urge to say, "Look, I get what they're going for" — because the style here is all grand gore and cheerful vulgarity. It's very much like a season of American Horror Story, suffused with Murphy's longstanding fascination with body horror. But here, that fascination has been transplanted into the world of the mentally ill and the literally sickening treatments to which they've been subjected over decades. And really ... why? It is one thing to know about the brutality and human rights violations that resulted in icepick lobotomies and trepanning and submersion in freezing or very hot water to "treat" everything from hallucinations to homosexuality. But using explicit images of those things in this context — where there is also a shocking amount of blood and gore of other kinds — seems uncomfortably close to mere exploitation, making a spectacle of atrocities that don't deserve to be treated as spectacle.

Few of the other characters shed much light on Mildred's story. Jon Jon Briones as Dr. Hanover is often more interesting than Mildred is, but his story eventually devolves into absurdity. Sharon Stone is swanning around with a monkey on her shoulder, playing the be-caftan-ed role in this production that Jessica Lange usually plays in Murphy's stuff. But because she's shoehorned into the story, the character is more shoulder-monkey than human. Judy Davis is terrific as Mildred's initial adversary, Nurse Bucket, who at first is the ice-cold authoritarian Ratched is in Cuckoo's Nest. But just like Mildred herself, Bucket experiences personality swings between cruelty and kindness that don't follow any discernible pattern except what's needed to further the plot. The same goes for Finn Wittrock's Edmund, who has come to the hospital after murdering a bunch of priests (would you like to guess whether you'll get to see these murders in great detail?), and who seesaws between embodiment of evil and wounded victim.

The whole thing just doesn't make any sense, and the more you think about it, the sillier it is. (Why can a patient institutionalized as "criminally insane," who's shackled at all times, suddenly ... attend a hospital dance that has one security guard? These things are troubling.)

Ratched is, however, visually arresting. The use of color, in particular, is as breathtaking and inventive as any design you'll find in television or film, and it's almost worth watching this absurd series just to enjoy it. It is the deep blues of this institution that play off the pale colors we know from most hospital shows. But it's everything else as well. It's this stunning shot of Sophie Okonedo — who plays a patient who disassociates — simply sitting on a couch. The pink, the green of the sofa and the green of the carpet and the green in the skirt (all different but unified in an unexpected way), the blue curtains that bring in the hospital. 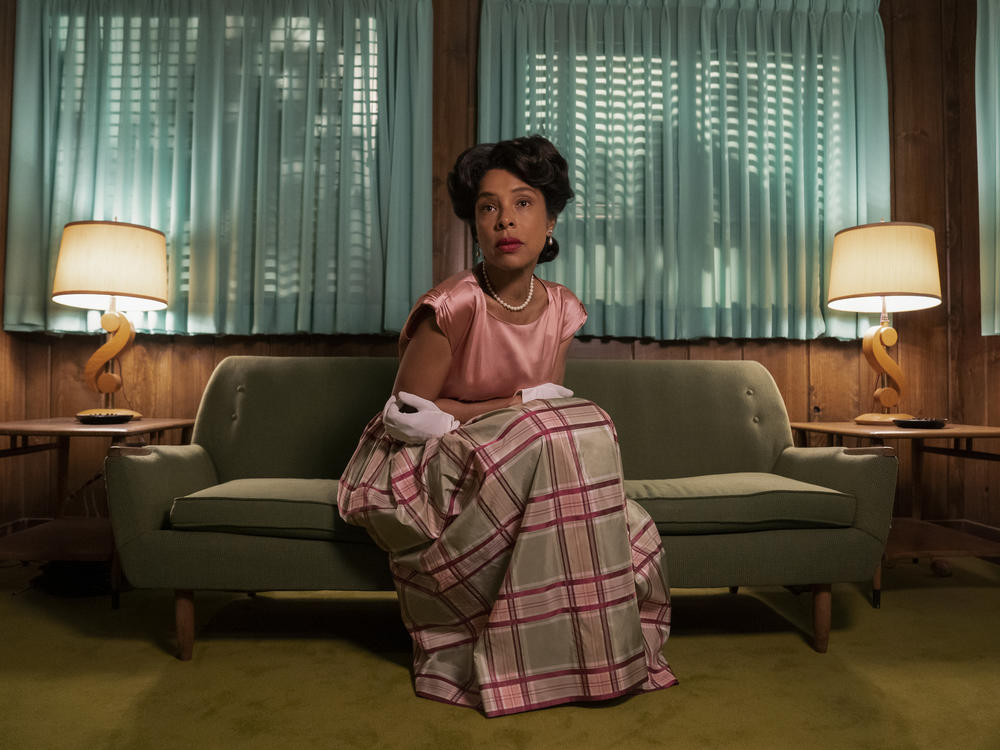 It's this shot of the staff, with uniforms that have that deep hospital tone, but also are touched with a paler blue-green, all standing on a copper carpet. 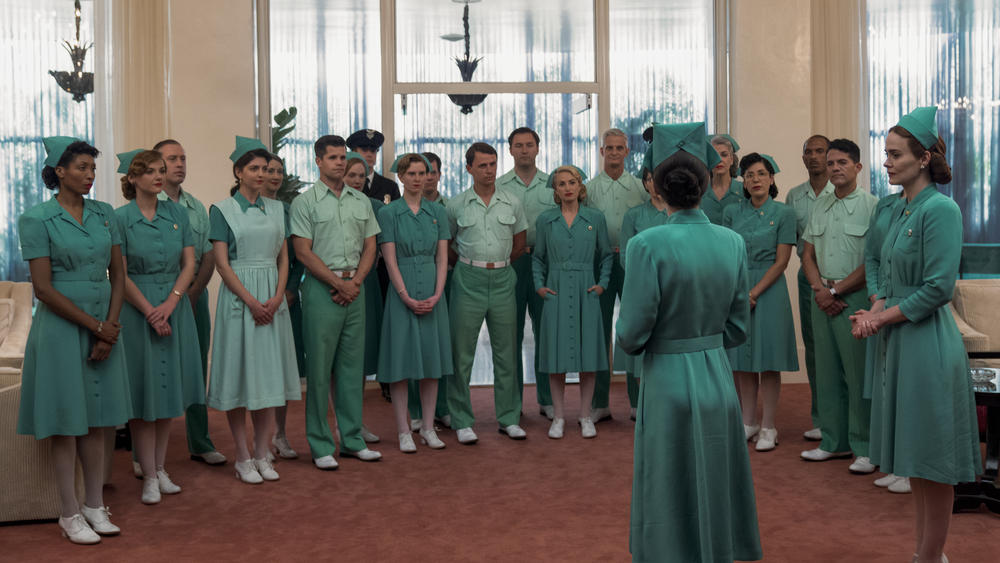 Caption
The staff assembles in front of Nurse Bucket (Judy Davis) in Ratched.

It's this meticulous composition — coppers and peaches in the foreground, blues further back, with Mildred in black in the middle. 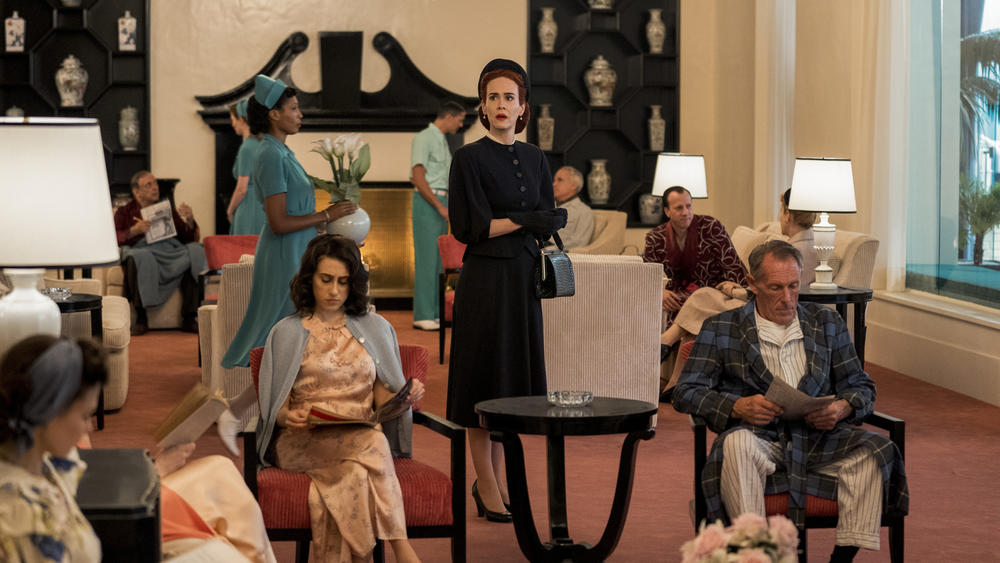 Caption
Sarah Paulson stands out as Mildred in her hospital in Ratched.

This series would make a stunning book of photographs, and production designer Judy Becker, locations manager Robert Foulkes, and costume designers Lou Eyrich and Rebecca Guzzi deserve great credit for creating an impeccable world that deserved to have much more interesting things happen inside of it.

Ratched has some of the telltale weaknesses of many pieces that come from creators who are so powerful that their freedoms have, paradoxically, become limiting. Netflix has, for years, bragged about the input it doesn't offer, the notes it doesn't give, the "no" it wouldn't think to direct at an auteur. But here, perhaps a small dose of notes — from someone — would have been useful. Perhaps someone needed to say, "This really doesn't make any sense." Very often, to be edited is to be well-served and to be told no is to be rescued from the excesses of your own creative mind. It's possible that Netflix, in its collaborations with idiosyncratic producers, needs a more robust Department Of No.

Because of incorrect information provided by Netflix, a previous version of this story gave Robert Foulkes' last name as Fultz. 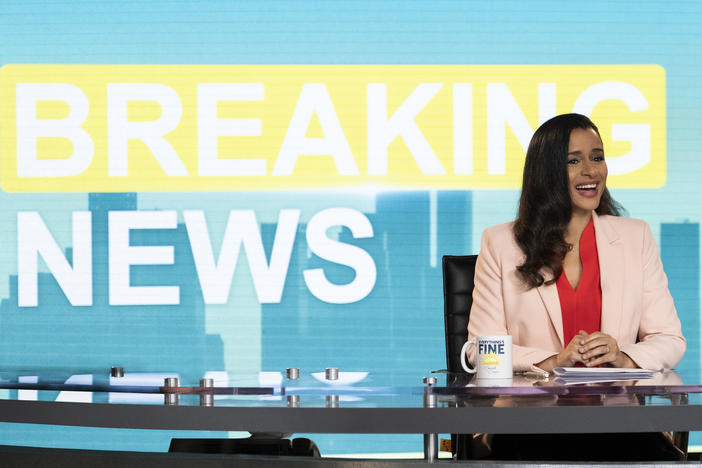 Sarah Cooper's Netflix Special Is As Weird As 2020, But In The Good Way

Sarah Cooper became famous for TikTok videos in which she lip-synced the president. Now, she's digging deeper into the emotional messes of this year. 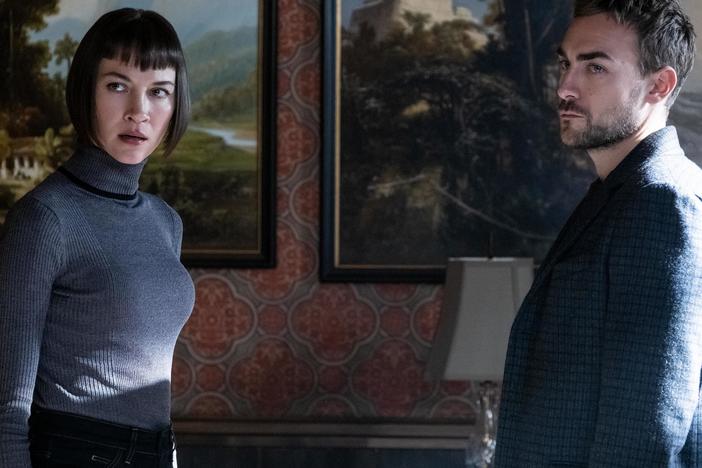 Damned If You Do: Hulu's Less-Than-Marvelous 'Helstrom'

A surfeit of subplots and secondary characters — and a complicated production history — take a minor Marvel occult hero on a journey that turns out to be a dead end. 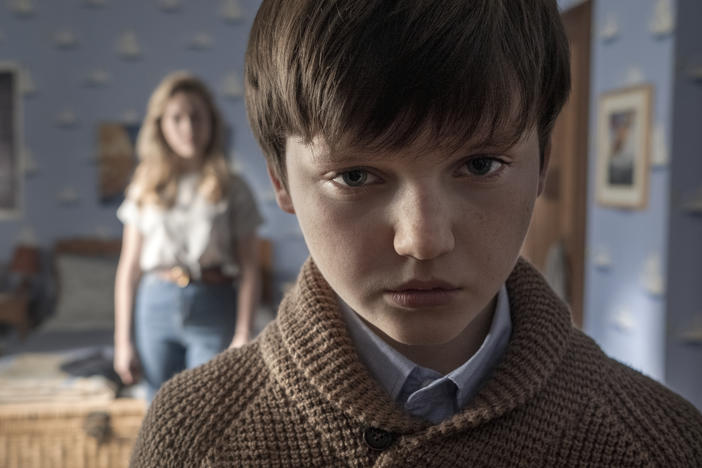 Creepy Kids, A Dark Mansion And '80s Fashion: 'The Haunting Of Bly Manor'

The follow-up to Netflix's The Haunting of Hill House series may not be as spooky, but it does manage to wrap up its story in a more satisfying manner.