In 'I'm Thinking Of Ending Things,' A Couple Gets Stuck In A Dreamlike Limbo 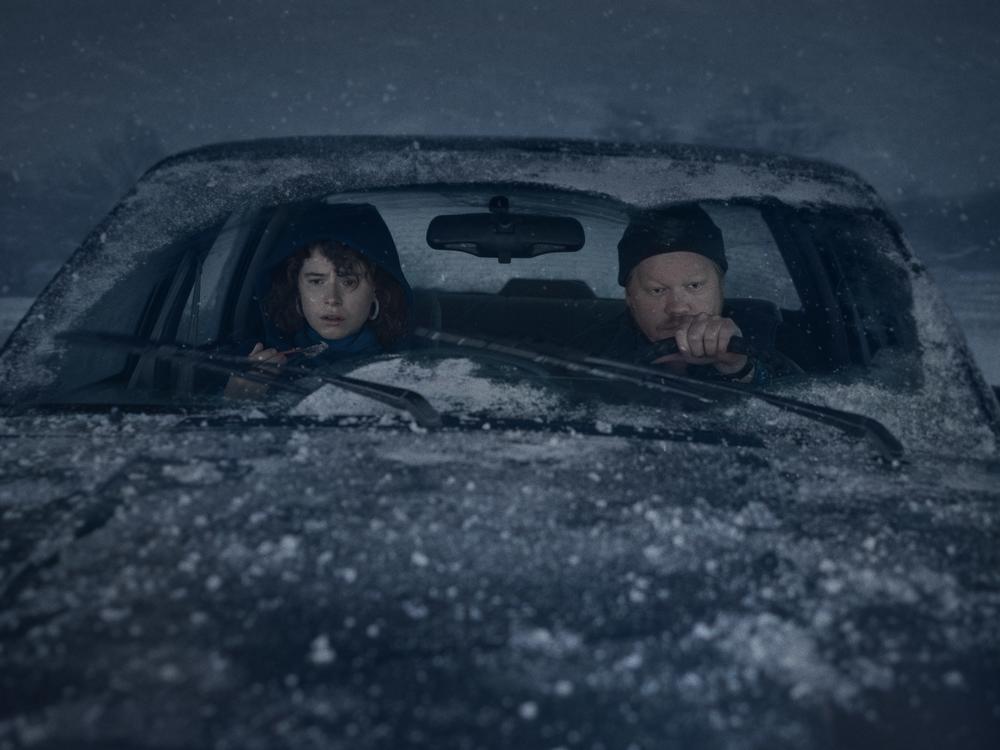 Caption
Snow Way Out: A couple (Jessie Buckley and Jesse Plemons) takes a long road trip during a snowstorm in I'm Thinking of Ending Things on Netflix.

After finishing writer/director Charlie Kaufman's latest film, which hurls so many things at you as you watch it you find yourself bobbing and weaving just to keep up, I longed to talk it over with other people. It's that kind of movie, wrapped in a thick shroud of fully intentional ambiguity that always threatens to thin to mere vagueness, and it benefits from the kind of unpacking that grows out of discussion. But as the film wasn't out yet, I tentatively clicked on a few advance reviews.

There, to my surprise and no small amount of dismay, I found ... just a whole metric ton of spoilers.

To be fair: This is the kind of movie it is almost impossible to write or talk about without revealing What's Really Going On, unless one sticks to the barest bones of the plot.

So let's do that. A young couple who've only recently gotten together (Jessie Buckley and Jesse Plemons) take a long car trip during a snowstorm to have dinner with the guy's parents (Toni Collette and David Thewlis) at their farmhouse. They have dinner. Things get awkward; weird stuff happens. The couple drives back to the city. The snow gets worse. Things grow more awkward. Weirder stuff happens.

That's fine, as far as it goes, but it doesn't begin to convey what sets I'm Thinking of Ending Things apart, or what makes it so recognizably and indelibly a film only Kaufman can or would make. I will endeavor to do so here, without spoiling What's Really Going On, by striving to keep things ambiguous, though we might have to settle for vague.

This is not, to be clear, a movie that harbors a Big Twist that must be protected at all costs. It's not a puzzle that, once solved, surrenders everything that made it interesting in the first place. For one thing, you know that things are hinky from the jump — Buckley's interior monologue seems strangely stilted, and keeps getting interrupted by Plemons' halting, unwieldy conversational gambits. These two people aren't on the same wavelength, though one of them clearly wants them, aches for them, to be. So things between them, and around them, subtly shift, and keep shifting.

On the surface, the critique Kaufman seems to want the film to make — the one he keeps shoving into the mouths of this couple over and over again, particularly in the two long car drives that make up the film's first and third acts — goes something like this: We humans subsist on false, manufactured, derivative narratives and inauthentic emotions to distract us from what is True and Original and Real.

But let's be real, or, you know, Real: That whole notion, especially as it's presented here, is a facile, boring one — the kind of pseudo-intellectual, solipsistic nugget of received, pre-digested "wisdom" you might remember getting spouted by the most tendentious, arrogant mansplainer in your college dorm, that one time at a party when he put down his acoustic guitar long enough to corner you over by the Funyons and demand you read Bukowski.

And that, it seems to me at least, is What's Really Going On, here.

Kaufman's true target isn't anything so abstract and anodyne as "modern life," or the way it encourages us to fall into intellectual laziness and disingenuously parrot thoughts, take up positions and form identities we've cribbed from things we've read or watched or heard. No, he's directing his mocking derision at the people (let's face it: the men, overwhelmingly) who lie to themselves about their own gifts, who too-eagerly embrace the need to be seen as the smartest, the cleverest, the most special, and who resolutely fail to connect with others because of it.

This being a Charlie Kaufman joint, we are reasonably safe in assuming that he's calling out himself, and others like him.

Over the course of the film, we see memories of past slights — and a lifetime of outright humiliations — mix with a desperate longing to be, and to have always been, accepted, embraced, validated. To have one's every pat, received notion about life, and visual art, and film, and the essays of David Foster Wallace (come on, that's a tell) vigorously agreed with, and eagerly shared, by someone, anyone, else: Eternal Sunshine of the Incel Mind.

That's a lot of conceptual work to lay upon the shoulders of your actors, especially when you keep buffeting them with continuous, mysterious shifts in mood, motivation, characterization, backstory and, not for nothing, wardrobe that would seem to deny them the bedrock emotional grounding that the craft of acting requires.

But Buckley is terrific, modulating her performance to accommodate whatever way Kaufman's wind is blowing, from scene to scene. Plemons is low-key terrifying in the way he eases from surly and resentful to pleading and pitiable to stoic and unreadable. Thewlis is by turns creepy and heartbreaking, and Collette's is a performance you find yourself watching with open-mouthed incredulity and awe. Say this much: She adds yet another wildly uncomfortable family dinner scene to an IMDB profile already studded with them.

I'm Thinking of Ending Things may be downbeat — and hoo boy, is it — yet it avoids the dour misanthropy of much of Kaufman's work. Only just, though. Your mileage may vary of course, but I found a moment, late in the film, when a character seems to forgive themselves for living an empty, emotionally stunted life quietly breathtaking, because knowing his stuff, I never expected Kaufman to permit himself or his characters (who are we kidding: himself) even the possibility of grace.

It's not a sentiment I was prepared to extend to the character in question, nor do I think Kaufman expects the audience to. But it was nice to see Kaufman letting up on himself — or at least, the self he sees in the mirror — for even a second, given that he's spent so much of his career flagellating himself for our amusement. 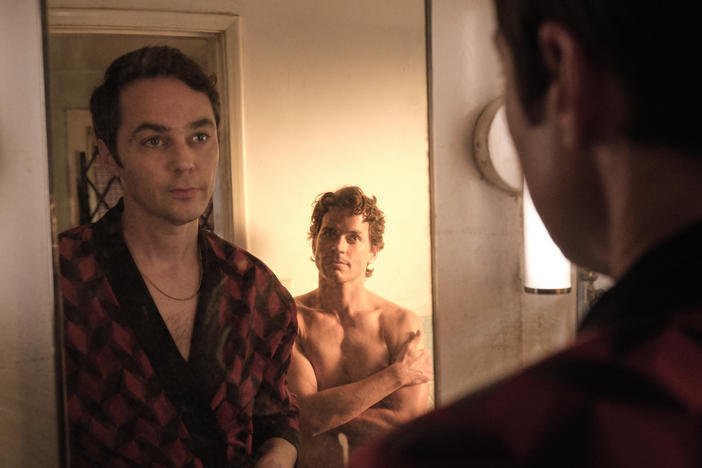 'The Boys In The Band': Raging Gracefully 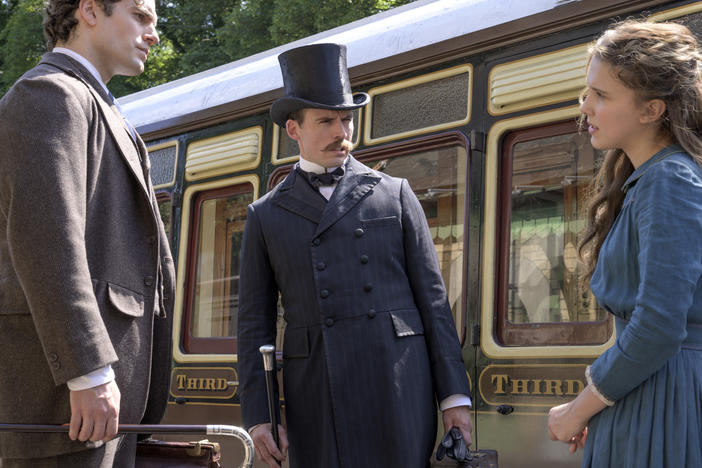 This bright and breezy Netflix adaptation of a YA novel finds Millie Bobby Brown starring as the brilliant, fourth-wall-busting little sister of Sherlock Holmes. 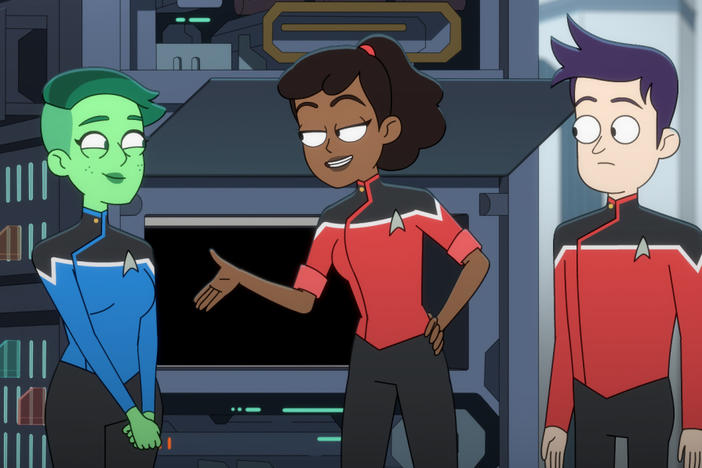 With 'Star Trek: Lower Decks,' A Venerable Franchise Loosens Up

The animated series spoofs Trek with in-jokes and easter eggs and even if the gags aren't yet firing on all nacelles, the premise — Starfleet's D-listers — holds promise.