Everything Is Unprecedented. Welcome To Your Hotter Earth 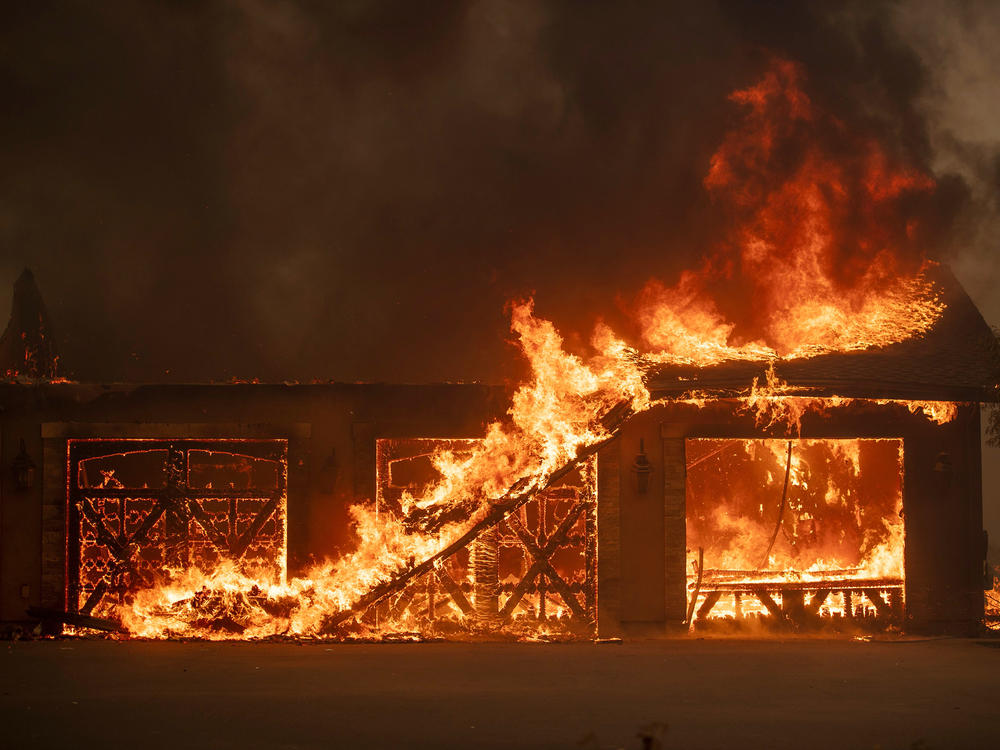 Caption
The five largest fires in California history have occurred since 2003, a sign that climate change is making extreme wildfires more frequent.

The upshot of climate change is that everyone alive is destined to experience unprecedented disasters. The most powerful hurricanes, the most intense wildfires, the most prolonged heat waves and the most frequent outbreaks of new diseases are all in our future. Records will be broken, again and again.

But the predicted destruction is still shocking when it unfolds at the same time.

This week, Americans are living through concurrent disasters. In California, more than 200,000 people were under evacuation orders because of wildfires, and millions are breathing smoky air. On the Gulf Coast, people weathered a tropical storm at the beginning of the week. Two days later, about half a million were ordered to evacuate ahead of Hurricane Laura. We're six months into a global pandemic, and the Earth is on track to have one of its hottest years on record.

Climate scientist Camilo Mora of the University of Hawaii says if our collective future were a movie, this week would be the trailer.

"There is not a single ending that is good," he says. "There's not going to be a happy ending to this movie."

Mora was an author of a study examining all the effects of climate change. The researchers concluded that concurrent disasters will get more and more common as the Earth gets hotter. That means we will live through more weeks like this one — when fires, floods, heat waves and disease outbreaks layer on top of one another.

Disease outbreaks are also more likely. The most recent U.S. National Climate Assessment warns that changing weather patterns make it more likely that insect-borne illnesses will affect the U.S. Climate change is also causing people and animals to move and come in contact with one another in new and dangerous ways.

Mora says helping people connect the dots between the current disasters and greenhouse gas emissions should be every scientist's priority. "That's the million-dollar question," he says. "How do we speak to people in a way that we get them to appreciate the significance of these problems?" 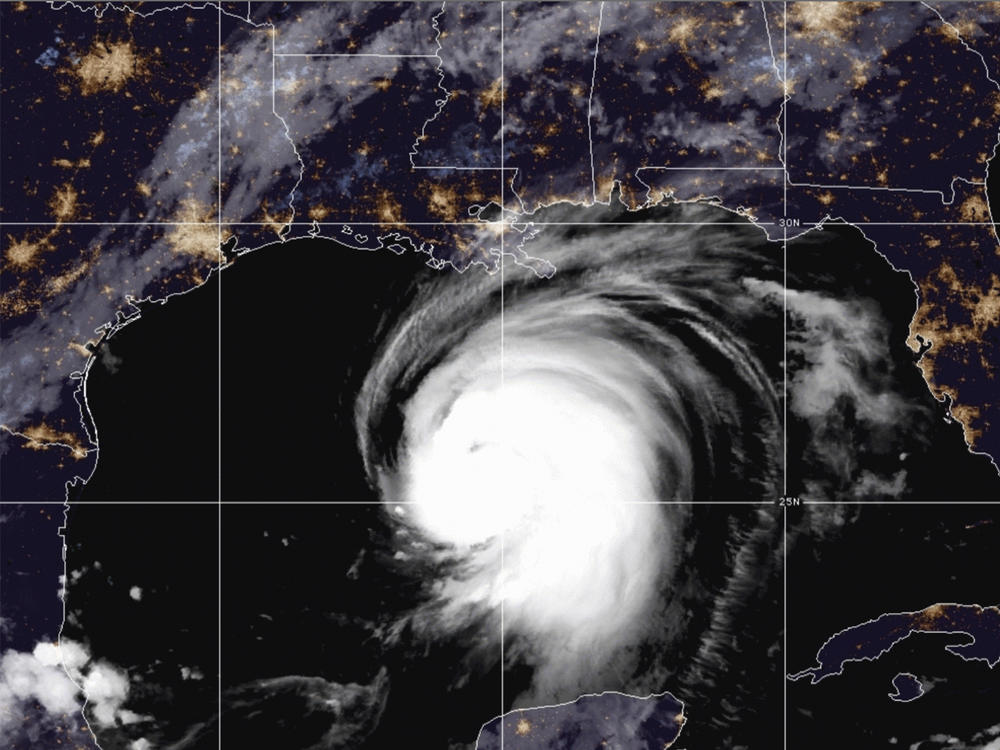 Climate change is making the air and water hotter, and that means more power for hurricanes.

Hot water is like a battery charger for hurricanes. As a storm moves over hot water, like Hurricane Laura did this week, it captures moisture and energy very quickly. In recent years, scientists have seen evidence that global warming is already making storms more likely to grow large and powerful and more likely to intensify quickly.

That's an alarming trend. "We're not very good at forecasting rapid intensification," Masters says. "That's critical because that gives you less time to prepare if there's a storm rapidly intensifying right before landfall."

Scientists have also found that hurricanes are dropping more rain, which means more flooding. Flooding is consistently the most deadly and damaging effect of a hurricane. Studies show many people underestimate the flood risks from hurricanes. Just a few inches of moving water can make it impossible to stay on your feet or control your car.

Add all that to the current pandemic, and you get a dangerous situation, especially for people living in the path of the storm. As NPR has reported, safe options for people who evacuate this year could be limited because group shelters might accept fewer people in order to maintain social distancing.

Concurrent disasters are hitting the country as more people struggle to keep their homes during the economic crash. Andreanecia Morris, the executive director of the nonprofit HousingNOLA, says this week's hurricanes are especially risky to the many people in Louisiana who don't have secure places to live because they were evicted.

"People are becoming more vulnerable as this COVID crisis goes on," Morris says, as more people get laid off or run out of savings. "We have frankly been failing to serve the most vulnerable, and the people who have been made vulnerable by these cascading catastrophes."

The fingerprints of climate change are all over the Western wildfires, too.

There are nearly 100 large uncontained fires burning across the U.S. More than a million acres have burned in California alone — almost all in the last few weeks. The smoke has blanketed cities and cast a haze from coast to coast.

Wildfires, like hurricanes, are a natural occurrence. They existed long before humans started rapidly changing the climate and are a necessary process for many Western landscapes. But a growing body of scientific evidence shows that a warming climate has changed the status quo.

Wildfires thrive on high heat, low humidity, strong winds and dry vegetation, all of which are more likely to occur in a warming climate, says Noah Diffenbaugh, a professor of earth system sciences at Stanford University.

Diffenbaugh was a co-author of a recent study that found climate change has doubled the number of days when conditions would support extreme fire in California. "And it's particularly increased the odds that those conditions occur broadly, simultaneously," Diffenbaugh says.

Take the fires currently burning across the West.

Two of the fire clusters in California are among the five largest wildfires in state history. The Pine Gulch Fire, chewing across the Western slope of the Colorado Rockies, is now the largest fire in that state's history.

All occurred during a heat wave that broke temperature records from Texas to Washington state. Death Valley, Calif., reached 130 degrees Fahrenheit, a temperature, if verified, that would rank as one of the hottest ever reliably recorded on the planet. At the same time, scientists are warning that Colorado and much of the Western U.S. may be in the early stages of a climate-fueled megadrought, the likes of which haven't been seen in the last 1,200 years.

"When you have warmer temperatures and you're lengthening the warm season, you're also lengthening the time when wildfires have a chance to start and grow," says Becky Bolinger, Colorado's assistant state climatologist.

The fire season is growing at a time when more people are in harm's way. Millions of houses in the Western U.S. have been built in fire-prone areas, many before building codes required fire-resistant roofs and siding. Many landscapes are also primed to burn because of overgrown brush and trees. For much of the last century, the U.S. Forest Service and other fire agencies extinguished wildfires, allowing vegetation to build up.

Experts say that living with both destructive wildfires and hurricanes will take more planning and preparation. Communities will have to strengthen existing homes and infrastructure, as well as improve evacuation and emergency plans. Some neighborhoods could prove too unsafe for residents at all.

How bad it eventually gets depends on how quickly the world can reduce carbon emissions. But the past weeks should make clear: "Climate change and its impacts are not the future," says Crystal Kolden, a fire scientist at the University of California, Merced. "They are now." 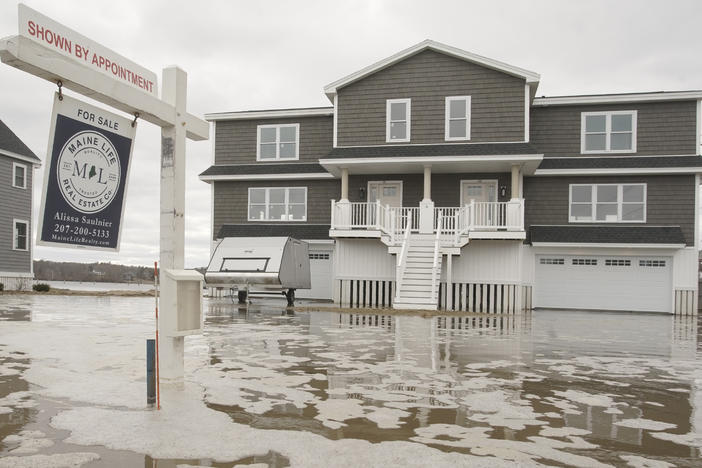 Millions of home listings on Realtor.com now include information about climate change-driven flood risk. Other real estate sites are holding off. 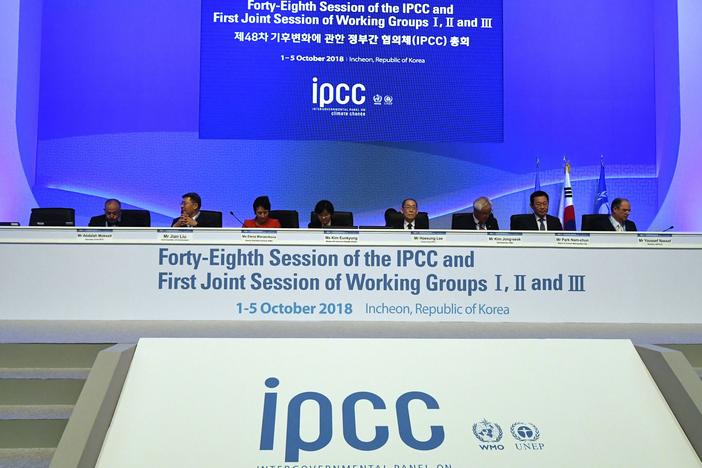 Everyone Loves The Chat Box: How Climate Science Moved Online

Scientists from around the world are writing the next major United Nations climate report. Summarizing the state of the atmosphere without meeting in person is as hard as it sounds. 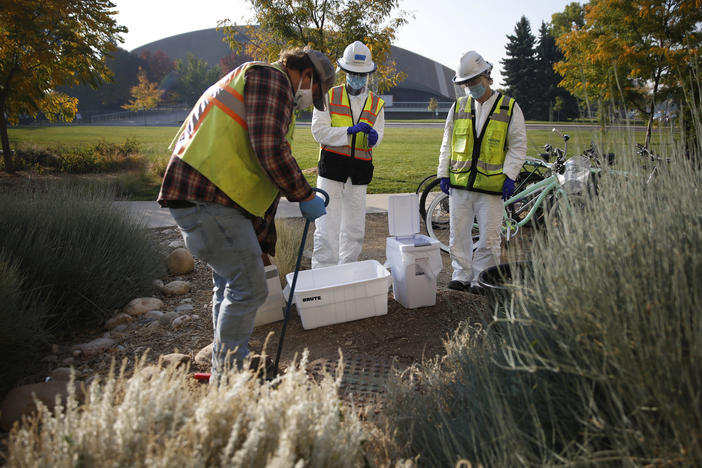 Wastewater offers an ideal testing opportunity for colleges: People often poop where they live; colleges know who lives in each dorm; and testing wastewater is a cheaper way to monitor virus spread.