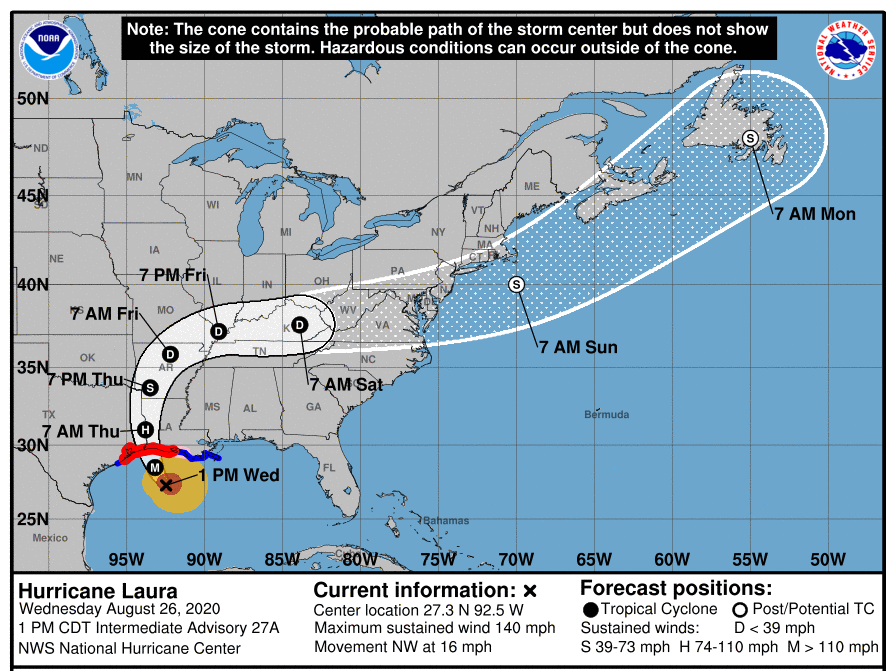 Caption
The National Hurricane Center predicts that Hurricane Laura will make landfall as a Category 4 storm.

Hurricane Laura is closing in on the northwest Gulf Coast and is expected to bring extreme winds and "catastrophic" storm surge to parts of Texas and Louisiana starting Wednesday night, according to the National Hurricane Center.

The center said Laura is an "extremely dangerous" Category 4 hurricane, now with maximum sustained winds of near 145 mph — just 12 mph short of the Category 5 classification. Forecasters say the storm could strengthen before it reaches the coast.

As of 6 p.m. ET, the storm is about 130 miles south of Lake Charles, La., and 140 miles south-southeast of Port Arthur, Texas. It is forecast to move inland late Wednesday and farther into northwestern Louisiana on Thursday. From there, it will head across Arkansas and over the mid-Mississippi Valley on Friday.

The National Hurricane Center said storm surge — the rise in seawater caused by a storm — and tropical storm-force winds will arrive well in advance of the storm's center, and that "all preparations to protect life and property should be rushed to completion in the next few hours."

It is also warning of an "unsurvivable" storm surge with massive waves that will cause significant damage from Sea Rim State Park in Texas to Intracoastal City, La. The surge could affect areas up to 40 miles inland and dump floodwaters to the area that may not recede for days.

As of late Wednesday afternoon, water is rising along beaches and roads in parts of southern Louisiana and Texas, and winds across the region are picking up speed. The National Hurricane Center said on Wednesday afternoon that if people delay evacuating, the roads could already be flooded.

Sporadic tornadoes are also expected in the late afternoon and evening over Louisiana, far southeast Texas and southwestern Mississippi.

Graham said earlier Wednesday that things are "changing rapidly here, but what's not changing is the fact that this is going to be a catastrophic life-threatening event."

Laura is expected to weaken rapidly after it makes landfall Wednesday night into Thursday morning, but the projected storm surge could still cause the most life-threatening damage, the hurricane center said.

If the peak surge occurs during high tide, the water along Johnson Bayou to Rockefeller Wildlife Refuge on the Louisiana coast could rise between 15 and 20 feet. Other nearby areas could see storm surge as high as 15 feet.

"Surge-related flooding depends on the relative timing of the surge and the tidal cycle, and can vary greatly over short distances," the hurricane center said.

Those levels of storm surge are "not survivable," Graham said.

"It's water in places that wouldn't normally have water," he said, "so it's water up your pant leg beyond even up to the top of your house and over your house."

Earlier this week, some residents in Laura's path faced Tropical Storm Marco, which dumped a lot of rain but weakened considerably as it approached the coast. Laura is expected to be much more powerful than that storm. Warm waters in the Gulf are aiding Laura's rapid growth.

In the lowest-lying areas along Louisiana's coast, roads were beginning to flood as of Wednesday afternoon, Louisiana Gov. John Bel Edwards said in a news conference.

"The storm surge flooding is starting now in Louisiana," he said. "It's well ahead of the storm. It will just get worse over the next day or so."

More than 200,000 people in the Calcasieu and Cameron parishes of southwestern Louisiana were placed under a mandatory evacuation order.

"If you're in those low-lying areas, if your local officials have told you that there's an evacuation in place, whether it's mandatory or voluntary, we need you evacuating now," Edwards said.

Laura's storm surge is expected to reach levels not seen in Louisiana since Hurricane Audrey in 1957, he said.

In Lake Charles, which is part of Calcasieu Parish, Mayor Nic Hunter told NPR member station WWNO that he was concerned not all residents were heeding those orders.

"I will be brutally honest," he said, "we are very concerned that not enough people are evacuating."

In Texas, around 400,000 people in Galveston, Beaumont and Port Arthur have been placed under mandatory evacuation orders. Texas Gov. Greg Abbott told reporters Wednesday that those in Laura's path should leave if they haven't already done so.

"The power of Hurricane Laura is unprecedented, and Texans must take action now to get out of harm's way and protect themselves," Abbott said. "The State of Texas is prepared to respond to the storm, and we are working alongside federal and local officials to keep Texans safe."

Despite these warnings, some residents said they are going to stay behind, Florian Martin of Houston Public Media reported. Others said they are taking measures to prepare their homes, using storm shutters and generators.

Walter Rowe of Galveston said he has lived in the area his entire life, and he only evacuated for Hurricane Ike in 2008. He told Martin he wasn't sure whether he would leave this time.

"I'm not worried, that's kind of what happens down here," he said.

The COVID-19 pandemic is complicating efforts to shelter evacuees safely. They are being directed to hotels instead of typically crowded shelters. An intake center in Austin, Texas, began turning away evacuees Wednesday morning when it ran out of hotel rooms, KVUE reported.

Hunter, the Lake Charles mayor, said he suspects the coronavirus pandemic and economic hardship are leading many people to take pause. He said people who are staying behind will likely have to wait hours for first responders to reach them.

"As soon as winds get above 40 mph, it is just absolutely unsafe to have vehicles out on the road," Hunter said. "So if people are staying, there is going to be an extended period of time, at least four to six hours, where public safety, law enforcement will not be able to respond to you." 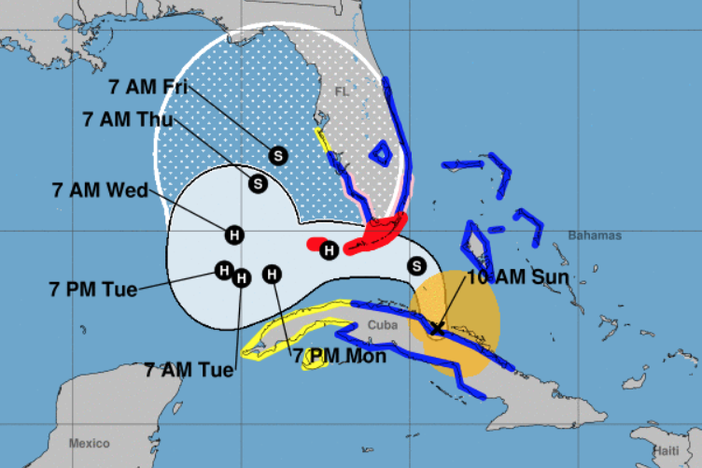 Multiple school districts have already canceled classes for Monday, in anticipation of a hurricane that could bring storm surges of up to four feet. The governor has declared a state of emergency. 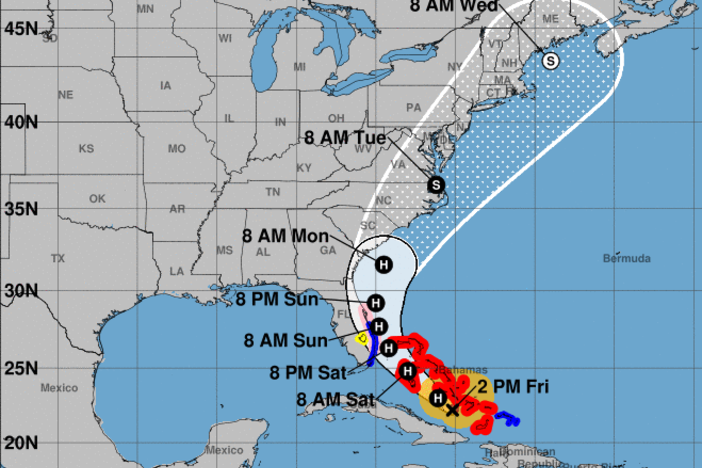 The hurricane could begin affecting South Florida as early as late Friday night and could increase in strength to a Category 2, DeSantis says. North Carolina and Virginia also declared emergencies. 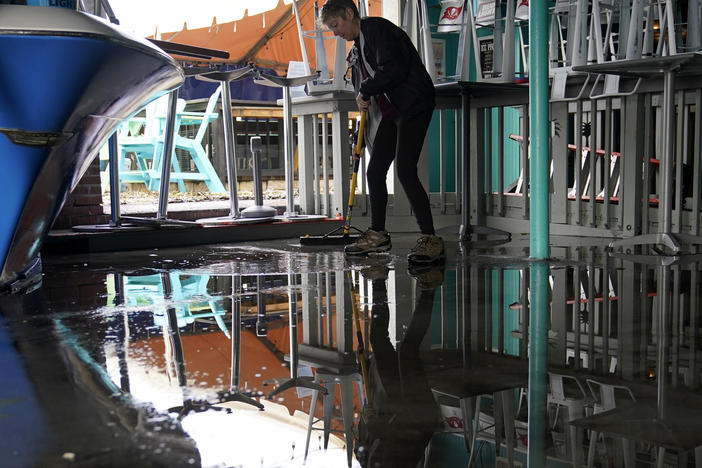 Tropical Storm Eta made landfall for the fourth time when it hit Florida's Gulf Coast. Some areas in southern Florida could see up to 25 inches of rainfall total from this storm.