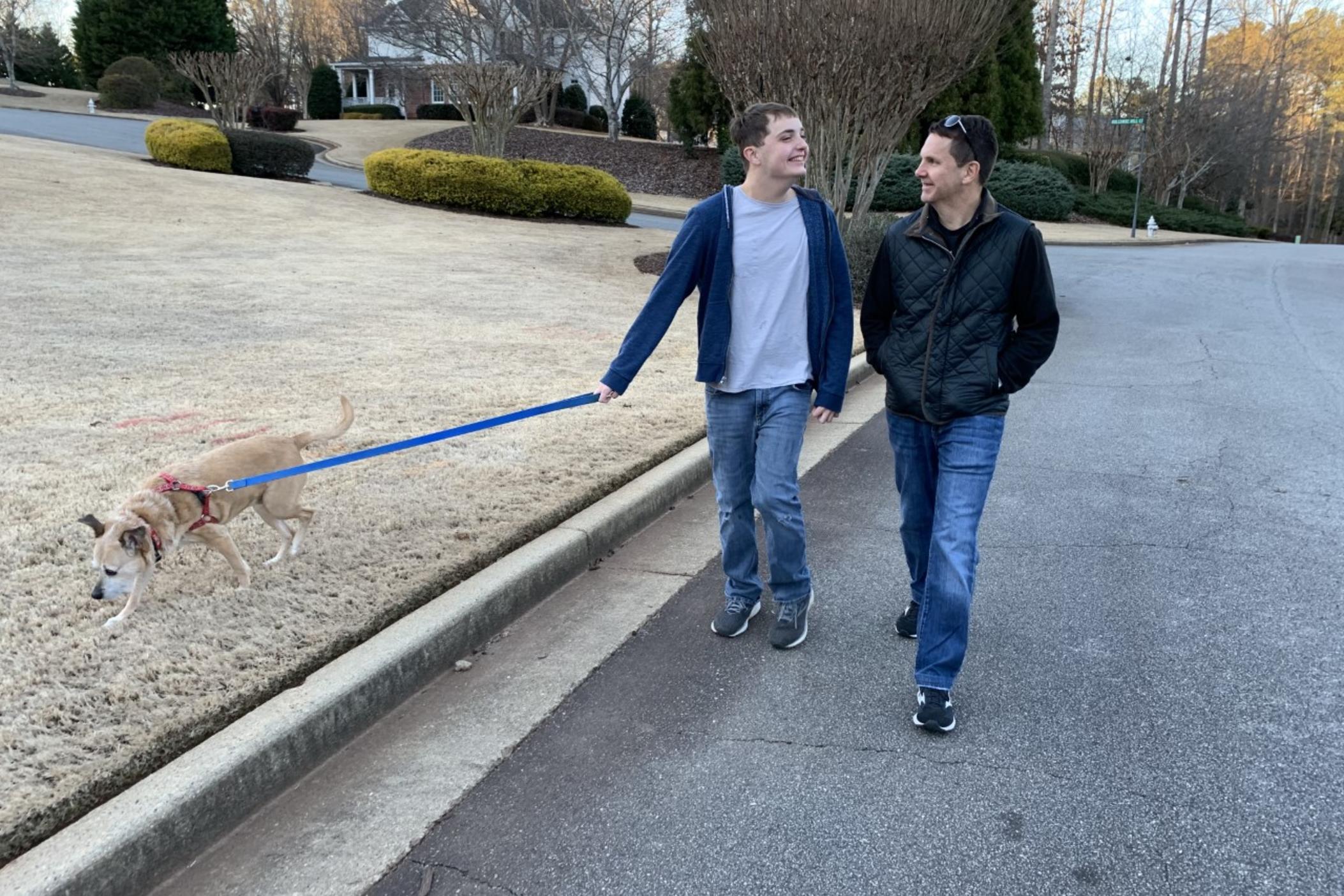 Caption
Jack and his dad Brian Normanly taking a walk in their neighborhood when the quarantine began.
Credit: Jennifer Normanly

Jennifer Normanly wants her 18-year-old son Jack back in school as soon as possible. Like many parents raising children with disabilities, she feels her voice has been forgotten amid the return-to-school pandemic discussion.

Normanly noticed Jack was different when he was a young child, from tense body movements to behavior changes. He was first diagnosed with language apraxia at nearly 4 years old, then mild autism. Within six months of his autism diagnosis, his mother saw his condition become unbelievably worse.

Jack, who once asked questions about the world around him and used his imagination, quickly became withdrawn and harder to understand.

“It’s been a tragic experience, honestly, because he really unraveled before our eyes,” Normanly said. “We have not made up for that lost ground despite all of our efforts.”

Jack’s autism is now considered severe, and any change to his routine disrupts his world. And the pandemic has disrupted everything.

Although Jack is nonverbal, Normanly said Jack immediately felt the impact. He has hardly slept since Cambridge High School shut down in March. His behaviors, like biting and grabbing, have intensified. That, in turn, has meant a more stressed household for everyone in this family of four living in Milton, a suburb just north of Atlanta.

When Fulton schools recently announced children would not return to the classroom until sometime after Labor Day, Normanly still had a glimmer of hope that students like Jack would be given special consideration.

But when she learned that wasn’t the case, she struggled to cope – the uncertainty of school returning back to normal was a thought too heavy to bear.

Addressing ‘Gaps In Services’ For Those With Special Needs

More than 160,000 students have some form of disability in Georgia, and their families are facing the same dilemma as Jack and his mother.

Their questions are daunting: How is my child supposed to sit for eight hours a day at a computer? Without in-person classes, will my child regress and fail to thrive? What about my job?

Normanly used to be a grant writer and holds a master’s degree, but has become a stay-at-home mother to better take care of Jack while her husband Brian continues to work in business.

The Georgia education department issued pandemic guidelines shortly after COVID-19 began to hit the state hard in March. For children with disabilities, the agency said school districts “have a responsibility to ensure that students with disabilities have both equal access to the educational opportunities provided to all students, as appropriate.”

The department went on to say distance-learning must be “accessible to students with disabilities who can benefit from that program.” 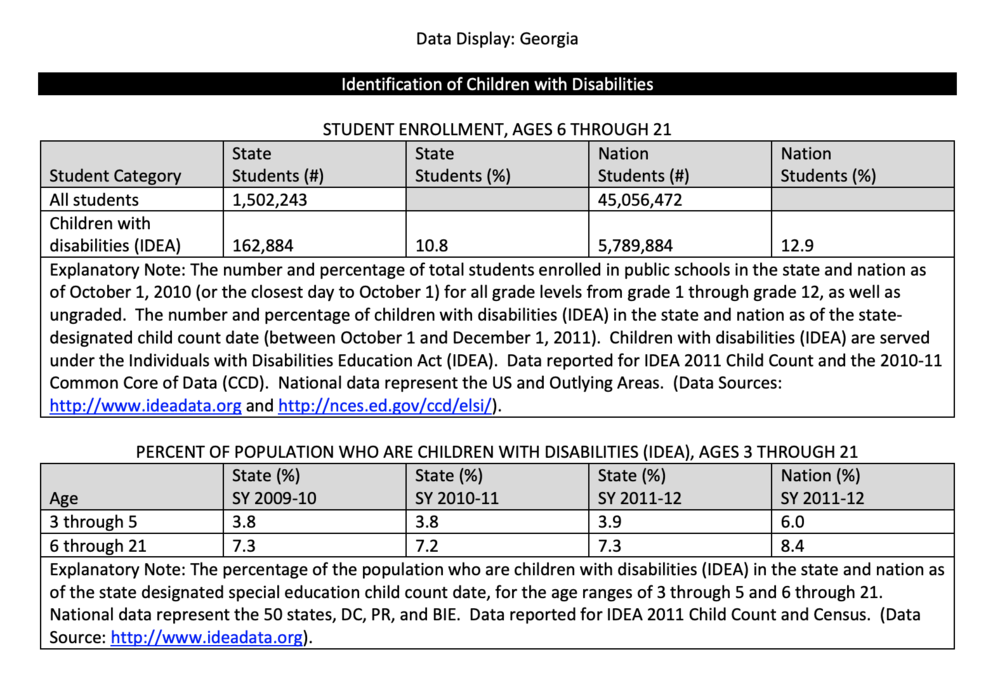 More than 160,000 students have some form of disability in Georgia.

In Jack’s case, appropriate care went from a small classroom with specialized care to a series of frustrating events, his mother said, trying to make the most of her son’s education at home. Normanly said that’s what most people will never understand, unless they too have a child with a disability.

“Virtual learning is not a practical solution, so it's a non-answer for us,” she said. “We’re already marginalized. (Now) we're feeling more marginalized.”

By law, eligible children with disabilities have Individualized Education Plans, or IEPs, designed to tailor their public education and classes to improve self-sufficiency, community-based skills and succeed in social environments.

Devon Orland, the litigation director for the Georgia Advocacy Office — a nonprofit organization that fights for the state’s most vulnerable — said the pandemic hit so fast, she doesn’t know of any IEP team that was prepared to go completely virtual.

“I’m not justifying it, but there wasn’t a lot of forethought to how to implement an IEP from a distance,” Orland said.

Orland was one of eight signatories who fired off a letter in July on behalf of the state’s vulnerable students seeking answers from the state’s school superintendent, Richard Woods, and members of the board of education.

Students eligible for special education services, the letter said, have experienced a disruption in learning, including “gaps in services and significant modifications in delivery.”

“While many IEP teams may have done their best to ensure a free, appropriate public education in a challenging time, compensatory services will almost certainly be required,” the letter said.

The state’s board of education hasn’t directly responded to the letter, but has since made efforts to bridge the gap in virtual education. The department received a $18.5 million federal grant to improve professional learning, expand student connectivity and expand the Georgia Virtual School.

“In Georgia, we are committed to building a more personalized and connected educational system, and continuing to leverage virtual learning more effectively, both during the COVID-19 pandemic and long-term," said Woods, the state school superintendent. “These funds will help us build that system and expand personalized learning opportunities for our students."

guidance on how the agency plans on committing to the Individuals with Disabilities Education Act in response to the pandemic.

Orland said she is hopeful schools are now better prepared to handle virtual learning as schools begin reopening in coming days and weeks across the state. She hopes they learned lessons from the spring.

With the state cutting nearly $1 billion in education funds due to budget shortfalls brought on by the pandemic, Orland fears that will leave child with special needs even more vulnerable.

“Many of the students don’t have computers at home and, if a child doesn’t know how to use a computer, how are they getting instruction?” Orland said. “The letter was intended to remind the state of its obligations.”

Meghan Whittaker, director of policy and advocacy at the National Center for Learning Disabilities, said special education teachers, students with disabilities and therapists have other difficulties to consider with virtual learning.

It becomes more difficult for teachers to pick up students’ cues of understanding, or lack thereof, through a computer screen, she said.

Many students going to the classroom would have an aide with them to help navigate through the day, but not while at home. In addition, she said, services such as speech therapy, occupational therapy or even one-on-one support from a paraprofessional can be hard to coordinate.

“Schools are really still trying to figure out how services can be provided virtually and how to deliver that kind of service and education to students with more significant needs,” Whittaker said. “There's still a lot that hasn't been worked out and that we don't have clear plans to provide those kinds of services.”

Whittaker said the intersection of disabilities and other marginalized identifiers such as race or socioeconomic background also play a big part in making virtual special education a success.

She believes students of color and students from low-income families with disabilities will be hit the hardest. Black families and minority communities are being sickened and dying of coronavirus at higher rates than whites, she said, “so that makes us think about the trauma they're experiencing and how they may have lost family members to the coronavirus.”

Many minority families raising children with special needs, Whittaker said, have also lost their jobs during the recession brought on by the pandemic, leading to food insecurity and job insecurity.

“Students can be having a really hard time and a traumatic experience dealing with all of those changes,” she said.

Whittaker said local resources are available to help parents like Normanly and educators in the throes of the pandemic. Educating All Learners is a hub of resources for education professionals to improve their practice to better serve vulnerable students.

The Georgia Virtual School also provides micro-courses to educators and students alike to aid in virtual learning. Constantly engaging with families also ensures they get support and resources they need during the pandemic and beyond.

“The more communication we have, the more partnerships we can build between schools and families and communities, the stronger a support system we can have as schools approach the coming year,” Whittaker said.

Normanly longs for the day Jack can return to classes at Cambridge High.  Her son needs normalcy, and she believes that is best served in the classroom.

It would allow him to get into a routine again. At Cambridge, he learned in a self-contained classroom with five other students, two paraprofessionals and one teacher. His learning was hands-on and interactive.

She said her family is fortunate: they have caregivers who come to the house to help out in his daily life and his education needs. “They've simply become part of our tribe, so to speak,” she said. “My family, instead of being a family of four, it’s been a family of eight.” 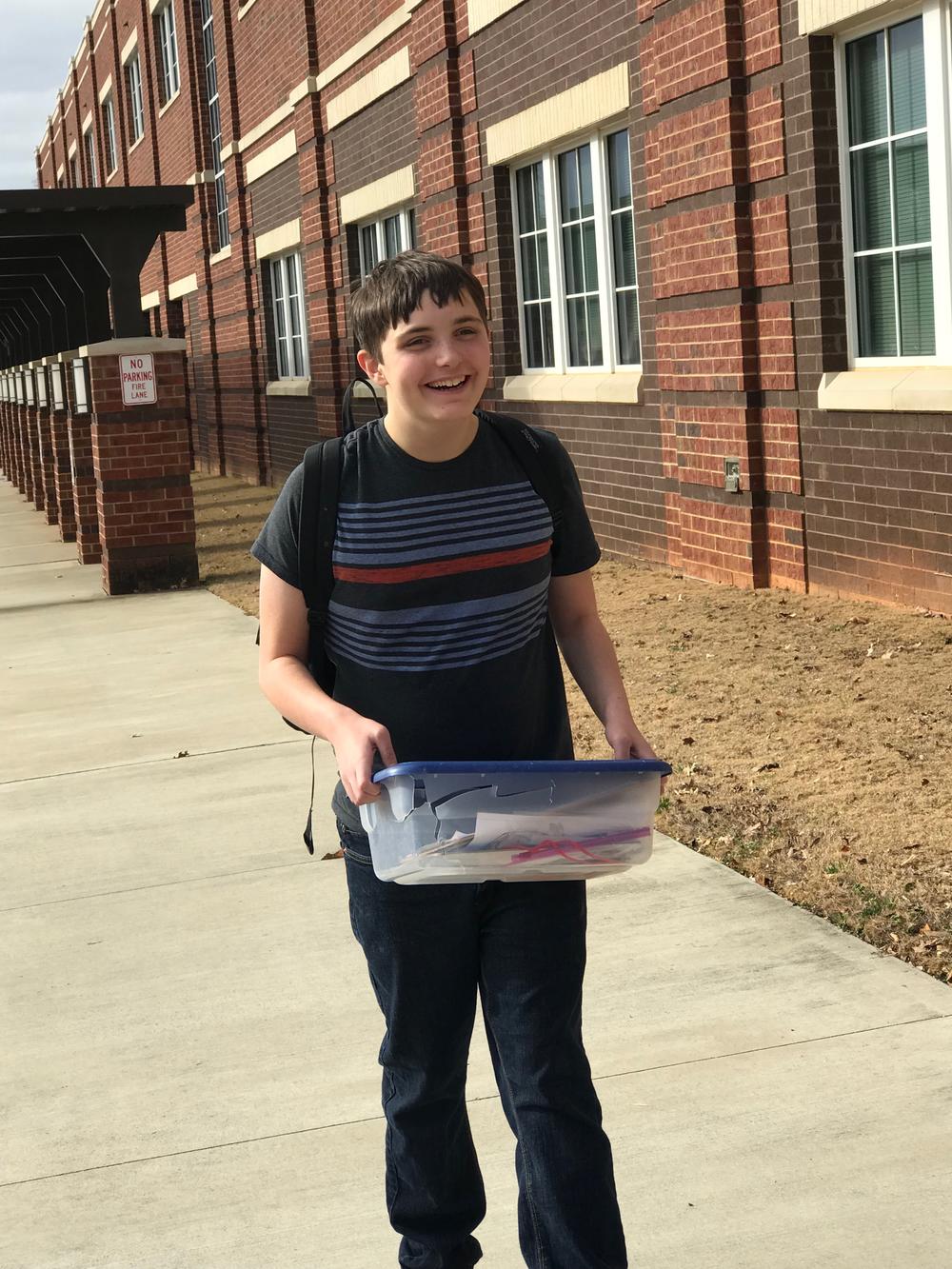 But there are intangibles Jack is missing out on, she said. His class would go on weekly community outings to learn job skills and other necessities of being in the real world. At 18, those trips were vital in preparing him for adulthood.

“Jack is supposed to be going off to whatever the next stage in his life is, and that's not in the cards for him,” his mother said.

The uncertainty of the virus and Jack’s future weighs heavily only on her mind. Without going to school every day, Jack has had a difficult time adjusting. Seeing his teacher through a computer screen didn’t translate in the spring.

She said they made one valiant final effort to try virtual learning, but it only triggered Jack’s behaviors. Eventually, Normanly and her husband made an educational program to fortify what Jack has learned in school.

“We just kind of came up with a program at home ourselves, a little Workbox program, because we don't want Jack to lose school,” Normanly said. “It's so important to us to reinforce skills that have developed.”

But no amount of alternative learning will amount to the quality education Jack anticipated when going to school. Instead, his family will continue to lean on each other and their support systems until there is a more practical solution. 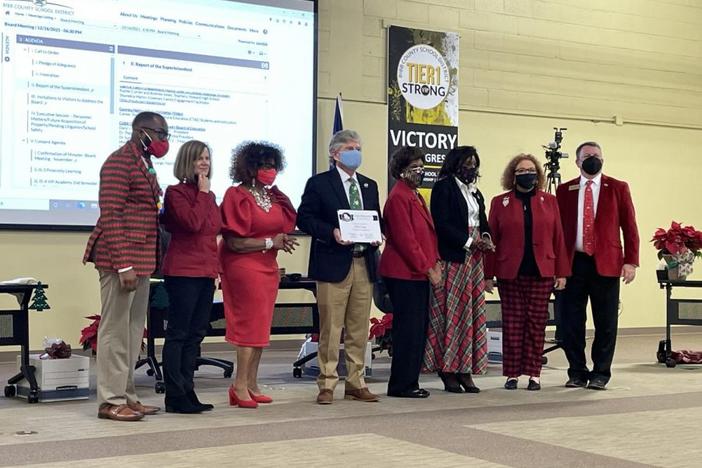 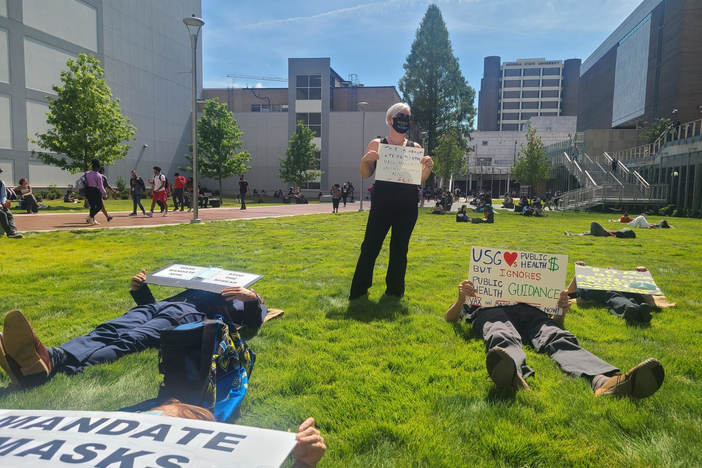 Despite Ongoing Calls For Mask Mandate, Regents Make No Policy Change At Board Meeting

The best way to prevent COVID-19 and spread of the virus is through vaccination and masking. That’s what Board of Regents Acting Chancellor Teresa MacCartney says.

But she and the Board also agree with the governor that mandates cause division on campus. And they will not be swayed by protests. 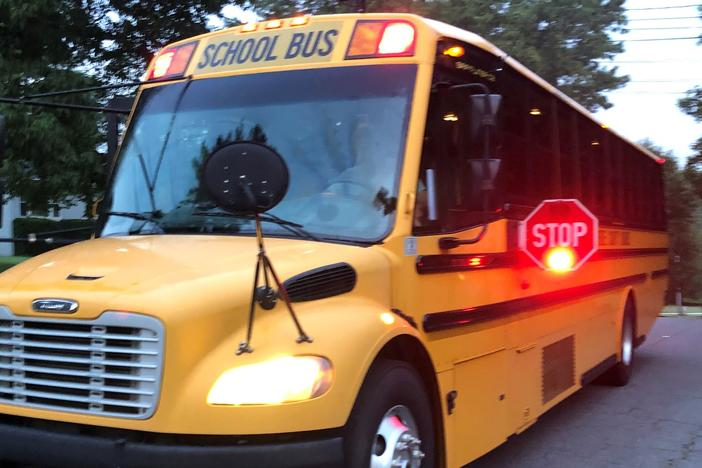 Schools across Georgia all have different rules when it comes to masks and social distancing. But some experts including Amber Schmidtke say they’re ignoring data about the delta variant and the rising number of young people getting COVID-19.