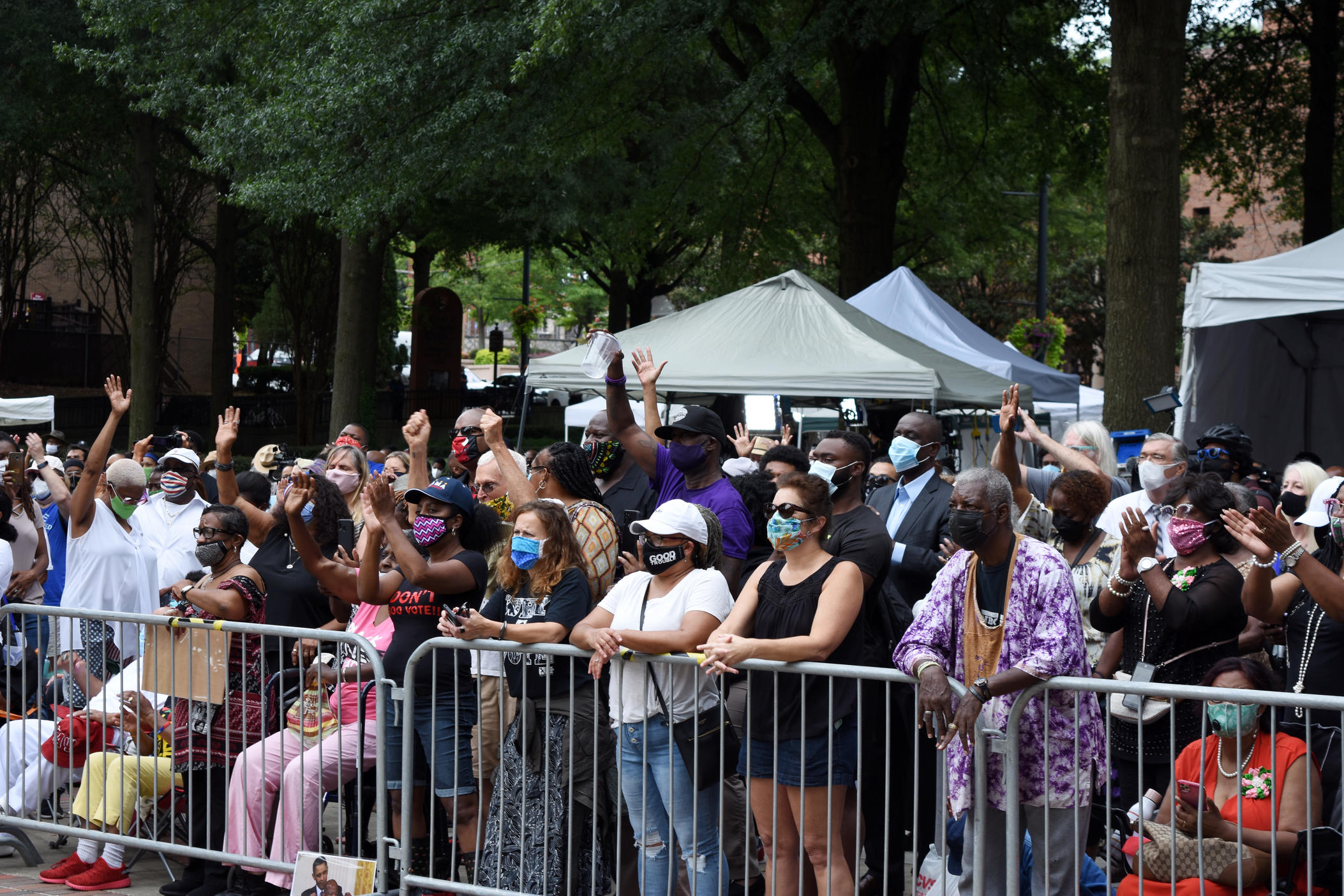 In the shade of a humid Georgia afternoon outside the historic Ebenezer Baptist Church, Les Fonza and Gilbert Young had just met, but they talked like old friends.

Both Black men of an older generation, they were drawn to the hallowed grounds in Atlanta's Sweet Auburn District to pay respects to Rep. John Lewis, whose 80 years of "good trouble" were being honored by three former presidents and hundreds more who gathered to watch his funeral.

"I thought my little action just to come out here today would be appropriate for me ... just to be here," said Young, an artist who painted one of the most widely reproduced pieces of Black art titled He Ain't Heavy. "I don't offer anything different from anyone else, but I do want, for my memory, just to be a small part of John Lewis' homecoming ceremony."

Fonza is a retiree from Illinois who moved down to Atlanta 14 years ago, and he almost didn't come Thursday.

"But I thought about it ... you know, I need to go down there because I need to respect this man, show my respect for this man who fought a long, long fight," he said. "I know I am not going to have a front seat in the church to hear everybody, but the thing of it is, I just wanted to be here to share this moment." 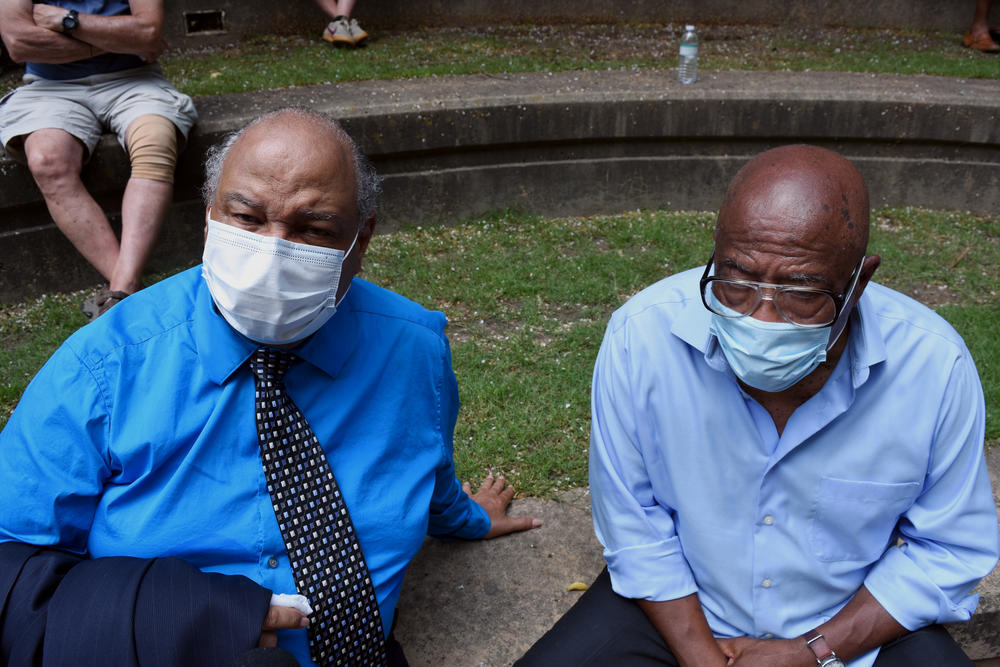 Caption
Les Fonza and Gilbert Young were two of the hundreds that celebrated the life of John Lewis outside Ebenezer Baptist Church. "I thought my little action just to come out here today would be appropriate for me... just to be here," Young said.
Credit: Stephen Fowler | GPB News

Mourners flocked to a giant screen set up near the Horizon Sanctuary, where former presidents George W. Bush, Bill Clinton and Barack Obama were among those who delivered stirring remembrances of the Alabama-born Lewis.

Bush recalled a passage in the Bible, where the sixth chapter of Isaiah tells the story of the eponymous prophet who hears the voice of God saying, "Whom shall I send? And who will go for us?"

Isaiah responded, "Here am I, send me."

The Texas Republican said Lewis embodied that scripture from a young age.

"John Lewis heard that call a long time ago in segregated Alabama, and he took up the work of the Lord through all his days," Bush said. "His lesson for us is that we must all keep ourselves open to hearing the call of love, the call of service and the call to sacrifice for others."

Clinton called Lewis a "walking rebuke" to those who wanted to give up the fight for equality.

"He kept moving," Clinton said. "He hoped for and imagined and lived and worked and moved for his beloved community."

Legendary civil rights leader Xernona Clayton reflected upon Lewis' life by recounting how she set up John and his wife, Lillian, who were married at Ebenezer in 1968. At first though, Lillian wasn't interested.

"She thought he was kind of slow. And I said, 'Lillian, he is busy. He is fighting the evils of the world,'" Clayton said. "I decided, 'Girl, listen, this boy is going places so let's see what we can do to keep this thing moving.'" 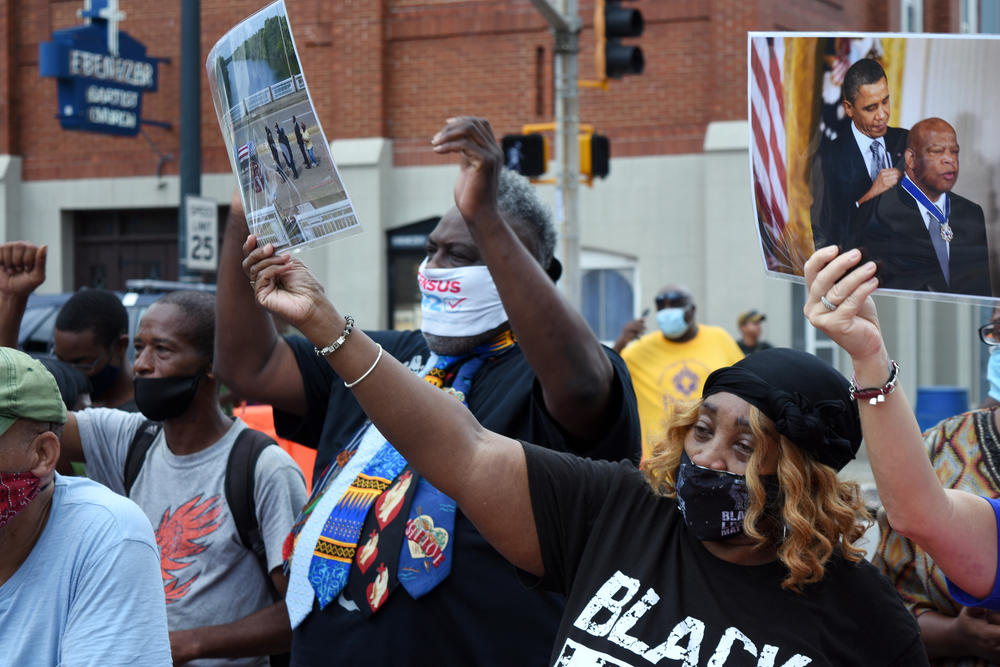 The eulogy was delivered by Obama, who gave a moving reflection on the civil rights icon's work.

"Someday, when we do finish that long journey toward freedom, when we do form a more perfect union, whether it’s years from now or decades or even if it takes another two centuries, John Lewis will be a Founding Father of that fuller, fairer, better America," he said. "And yet, as exceptional as John was, here’s the thing: John never believed that what he did was more than any citizen of this country can do."

Obama called for an expansion of the Voting Rights Act that would make Election Day a holiday, provide congressional representation to Washington, D.C., and Puerto Rico and said the filibuster should be eliminated to secure final passage.

Because of the coronavirus pandemic, seating at Ebenezer was limited. Rev. Raphael Warnock, running as a Democrat in Georgia's U.S. Senate special election, presided over the ceremony.

"At a time when we would find comfort in embracing one another, love compels us to socially distance from one another," he said. "But make no mistake, we are together."

After departing the sanctuary with a police escort, Lewis was laid to rest at South-View Cemetery next to his wife. 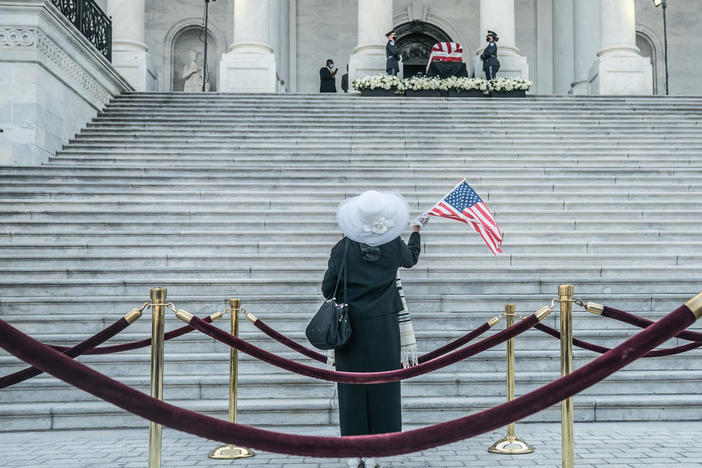 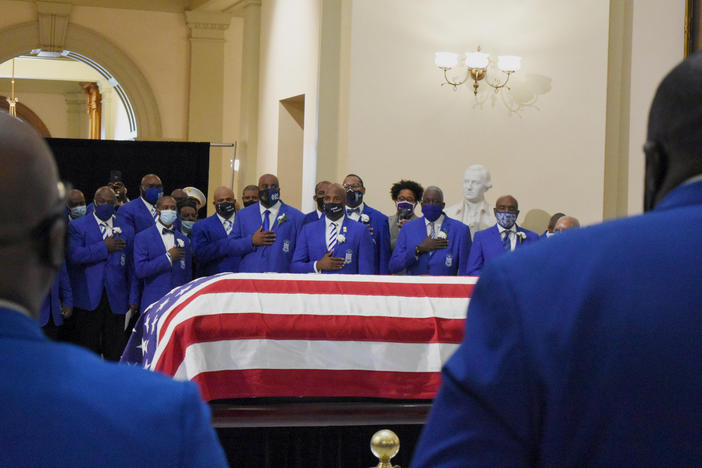 John Lewis embodied his fraternity's motto "Culture For Service and Service For Humanity.”