The decision defies the governor's executive order that stops short of such a mandate.

“We will continue to take active measures to help slow the spread of COVID-19 infections in Atlanta,” the mayor said. “Public health experts overwhelmingly agree that wearing a face covering helps slow the spread of this sometimes deadly virus.”

The order also prohibits gathering of more than 10 people in Atlanta.

The decision to require face masks could set up a clash with Gov. Brian Kemp, who has encouraged Georgians to wear face masks but not mandated it.

In an interview on MSNBC earlier Wednesday, Bottoms, who announced she tested positive for coronavirus earlier this week, blasted Kemp for his handling of the pandemic, saying the “state of Georgia has been very irresponsible in the way it has reopened back up for business as if everything is normal.”

“I specifically asked our governor about allowing Atlanta to go forward with mandating masks in our city. He refused,” she said.

The mask mandate makes Atlanta the third major city to require face masks in public, following the lead of Savannah and Athens.

Georgia has seen COVID-19 cases surging in recent weeks, with the state surpassing 100,000 cases on Tuesday. Nearly 2,900 people have died of coronavirus in Georgia.

The mayor also criticized Kemp's decision to deploy 1,000 National Guard troops after a surge in violence left an 8-year-old girl dead. In a tweet, Bottoms suggested the troops would be better put to use helping test Georgians for COVID-19 after her family's test results took more than a week.

We FINALLY received our test results taken 8 days before. One person in my house was positive then. By the time we tested again, 1 week later, 3 of us had COVID. If we had known sooner, we would have immediately quarantined. Perhaps the National Guard can help with testing too.— Keisha Lance Bottoms (@KeishaBottoms) July 8, 2020

The National Guard has been assisting the state with testing sites and COVID-19, especially in long-term care facilities.

In his executive order, Kemp said the city of Atlanta has "grappled with countless threats to public safety with riots, extensive property destruction and human injury in multiple communities" over the last two months, and that city officials "have failed to quell ongoing violence."

Bottoms said Kemp did not reach out to her before activating the troops. She called the move reckless and said it could provoke more violence.

In her interview with MSNBC, the mayor said she was feeling OK. "I feel like I have seasonal allergies and a scratchy throat," she said.

She said she was frustrated by the slow pace of getting test results. "We tested eight days previously. Didn't get our results back. One person in my house was positive then," she said. "For eight days, we are operating in our household as if everything is normal. We then retested. By the time we retested, three of us had tested positive."

She said she and the rest of her family decided to get the initial test after attending the funeral of Rayshard Brooks, who was shot and killed by police in a Wendy's parking lot

The mayor said she and one of her four children were asymptomatic. By last weekend, she said, her husband "was sleeping a lot."

"I've never known him to sleep that much," she said. "I initially thought his allergies were flaring up. By the third or fourth day of his sleeping, we decided to get tested again."

Masks have become a hot-button political issue, but health experts say it shouldn't be. Leaders who take the extra step to require masks rather than simply encouraging their use tend to have better rates of compliance, Emory Healthcare CEO Dr. Jon Lewin said last week.

"Saving lives is not a partisan issue," Lewin said. "It's simply practical and it's compassionate."

Savannah became the first Georgia city to mandate wearing masks, and was joined by Athens in a vote on Tuesday.

Bottoms said she agrees leaders need to take responsibility and make decisions that will allow society and the economy to recover from coronavirus.

"We will never be able to reopen schools and our economy if we don't take some responsibility for what we can do as leaders," Bottoms said. 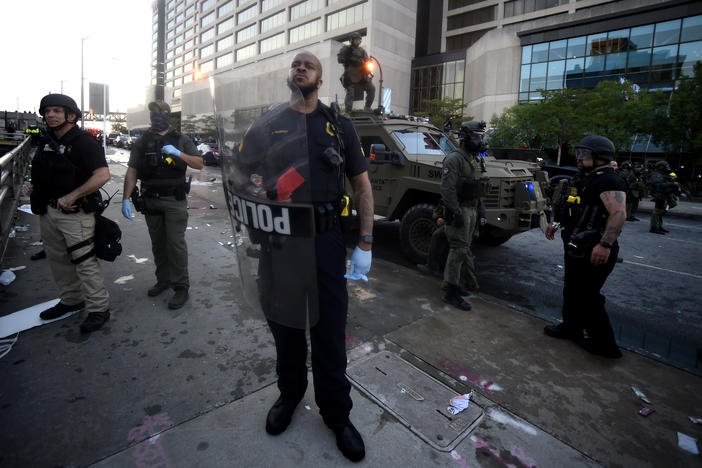 Gov. Brian Kemp called out as many as 500 National Guard troops shortly after midnight, hours into violent and destructive protests across Atlanta and...