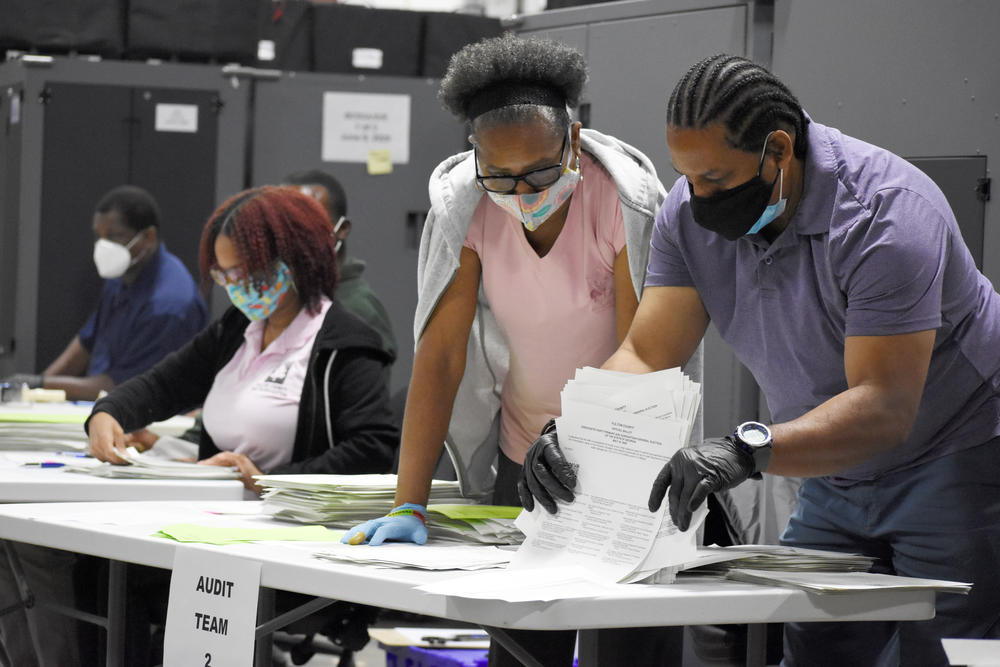 The county, secretary of state’s office and VotingWorks, a nonpartisan nonprofit elections group, performed a pilot of a “risk-limiting audit” to check the accuracy of the reported victories for Democrat Joe Biden and Republican Donald Trump.

States like Colorado and Rhode Island use risk-limiting audits to statistically identify a minimum number of ballots needed to have statistical – and actual – confidence in the outcome of a specific election.

“It's a type of audit that can help assure us that the tabulation equipment gave us the right outcome for the election, meaning that the right winner won,” Monica Childers with VotingWorks said.

Typically, a risk-limiting audit would be used with all ballots cast in an election, but Monday’s audit is one of several pilot audits the secretary of state’s office is overseeing before implementing them statewide.

Other forms of audits usually look at a random sample of precincts or machines, but the risk-limiting audit uses statistics to pull random ballots from the entire election, something Childers said increases both efficiency and accuracy as to who won.

“The closer the election is, the smaller the margin is, the more ballots you have to look at to make sure that you are getting a good sample of the election,” Childers said. “This election had a very wide margin in the Democratic presidential primary and the Republican.”

Because Biden received nearly 82% of the vote in Fulton County’s primary and Trump received 100%, the computer software said that only 27 ballots needed to be audited to have 90% confidence in the election results – or a maximum of 10% “risk” that an incorrect election result would not be corrected through the audit process.

But Childers said the actual measured likelihood of a wrong outcome not being detected is much lower.

The exercise began with volunteers rolling 20 10-sided dice to create a random number to “seed” the auditing software’s random number algorithm to select which ballots to audit.

“We’re using a computer to randomly choose ballots, which is good because humans are bad at randomness,” Childers said. “But because it’s a computer, it can’t create true randomness.”

From there, a spreadsheet was created that told workers which ballot to pull from random batches and boxes of absentee, provisional and ballot-marking device-printed ballots used in both the March and June elections.

After identifying the ballots that were to be audited, three teams of Fulton County election staff then looked at the text of the choices made on those ballots and entered them into a paper form that was then entered into the RLA software.

Childers said one hallmark of a risk-limiting audit is transparency. Members of the public were welcome to watch the audit, ballots pulled and audits completed were projected onto a giant TV and every piece of paper used was logged through several chain of custody documents.

Once the 27 ballots were located and audited, Childers and the secretary of state’s office displayed the results of the audit on the screen: there was a less than one percent chance that Biden's victory in the Democratic primary for Fulton County was incorrect.