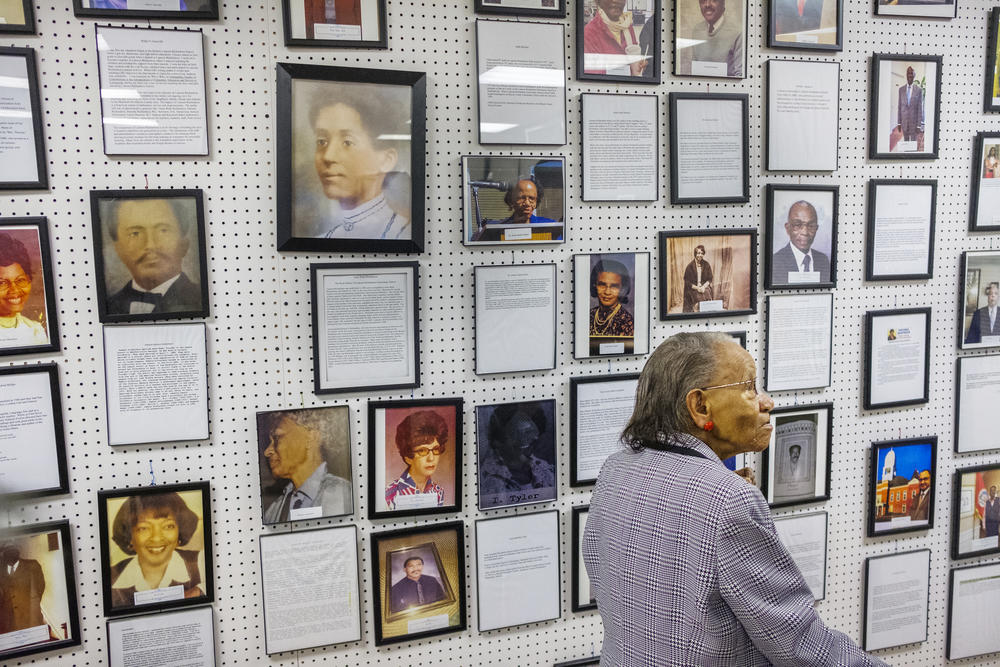 Anne Richardson Gayles-Felton, right, near a reproduction of a painting of her grandmother, Anna Wade Richardson, left, in the Lamson Richardson School Musuem in 2019. Richardson founded the school for African American children in 1886.

In November of 2019, there was a family reunion of sorts in Macon County, in the town of Marshallville.

The site of the reunion? The Lamson Richardson School, a school that began as an institution for African American children 21 years after the end of the Civil War. And the family? The community of Lamson Richardson Alumni. In a trio of classrooms, dozens of 8x10 photos of that family were hung on white pegboard nailed to the walls.

“This was my favorite teacher!” exclaimed one alumna after peering into a case full of photographs. “I used to do a lot of work in the library....”

This was a school founded by Black people for Black children in the years between the end of Reconstruction and the beginning of the Jim Crow era. And though it’s founder’s name isn’t as well known as luminaries like Lucy Craft Laney or Mary McCleod Bethune, she and dozens of others like her were no less influential in the lives of generations of children who came after them.

Today Lamson Richardson is a ‘90s era building that houses a head start center run by Fort Valley State University. It was made a museum through the efforts of alumna Verna Walker and a small army of volunteers. The original 19th century building burned down long ago. But a ribbon cutting drew this crowd, including Anne Richardson Gayles-Felton.

There are luminaries in the history of African-American Education, names Booker T. Washington, Lucy Craft Laney and Mary McLeod Bethune. But less well known are the other names behind the dozens of schools dedicated to educating black children in the Jim Crow South, names like Anna Wade Richardson

“That was my grandfather,” Gayles-Felton said while getting a first look at the photos on the wall, with Walker as a guide.

Gayles-Felton spent half a century training teachers at the college level. She has literally trained thousands of teachers, but her career began at this school that her grandmother founded.

“It all started here, with Anna Wade,” she said.

“I used to teach my little dolls,” Gayles-Felton said. “And as I was teaching my little dolls, the people who were responsible for me at that time would come in with suggestions. And those suggestions were based upon things that they had learned from my grandmother."

Those suggestions formed what Gayles-Felton calls her grandmother’s teaching gospel.

“The teaching gospel of Anna Wade RIchardson was that number one, every child is able to learn,” she said.

Anna Wade Richardson was born into slavery in 1862 in Marshallville, about 45 miles southwest of Macon. After emancipation, her mother continued working for the family who had once claimed ownership over her own family. When Anna was of age to go to school, the planter family pitched in with Anna’s own family to send her to New England for her education. After that, her granddaughter, Gayles-Felton, said she could have stayed up north.

For Richardson, helping meant opening a school. Footing the bill was the American Missionary Association, thought radical for the time for pouring money into private Southern schools for Black children. Lamson was the name of one of Anna Wade’s New England benefactors, Richardson was the name of her husband, so it was the Lamson Richardson School not long after it was founded in 1886. 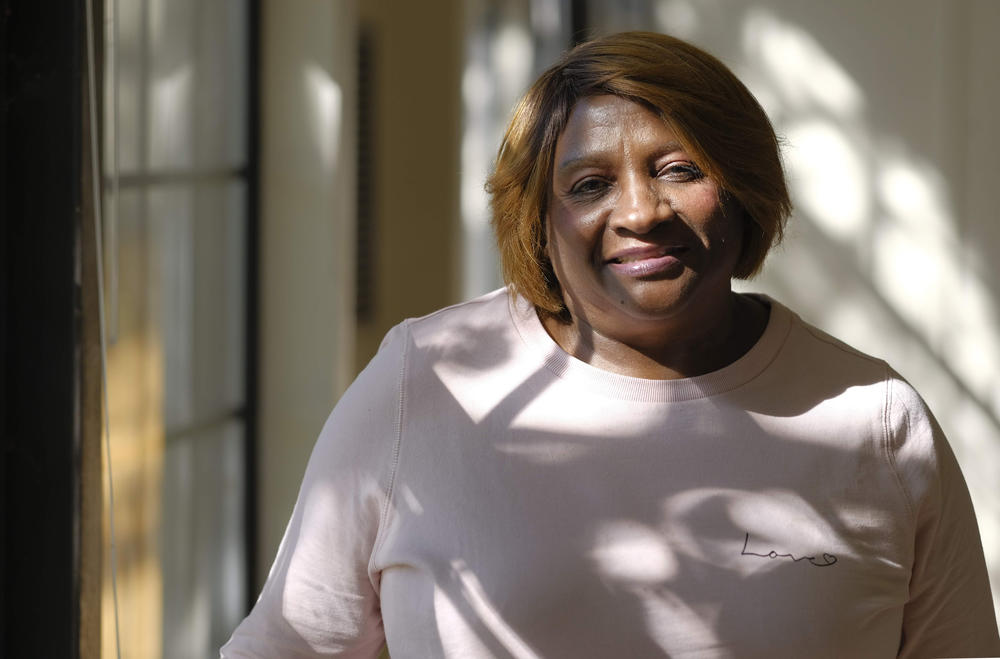 Verna Walker and a team of volunteers put together the museum honoring the Lamson Richardson School in Marshallville. She would like the state to place a historic marker there.

Lula Louise Miller Campbell is in her early 90s. She came to Lamson Richardson in 1933 at the age of five. Her parents chose it over the one room school close to the 400  acre family farm. At Lamson Richardson, Campbell and other students had a teacher for every grade level, unlike one teacher for the entire student body at the school closer to her home. It also meant the teachers were black women trained at the best colleges, but as it did or students from as far away as Alabama, it also meant living away from home.

“My mother would get up on Monday morning, comb my hair and pack my little luggage and tell me what they put on each day,” Campbell said.

She wouldn’t see her mother again until Friday.

“She gave me and a little tender love when I got back.”

Campbell became a teacher. Whole generations of Lamson women did. And when they came back to teach at Lamson, they often taught the children and grandchildren of their classmates. Verna Walker says that community was the strength of the place, and it was why she said she felt called by God to commemorate it with a museum.

“We may not have had all the resources that a white school would have had in the county, but there was a lot of things that we did have,” Walker said. “And the love and the support and the caring and trying to educate the kids....that was a lot. That was a whole lot. "

As for the museum, Verna Walker says it isn’t finished. Next she’d like the state of Georgia to help out with a historical marker. 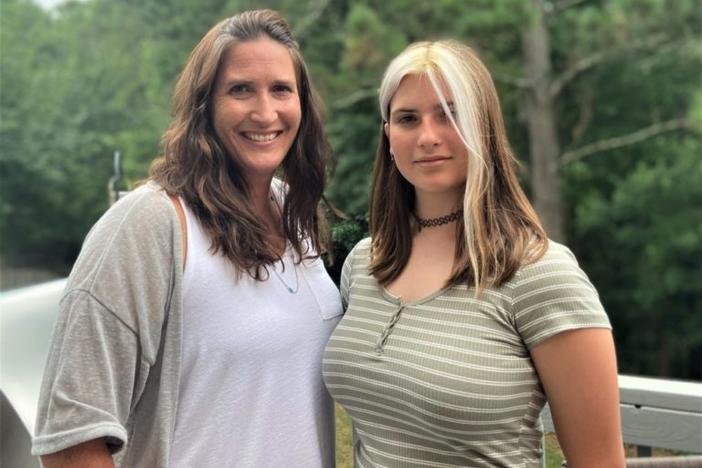 A pushback on social and emotional learning in the schools is starting to surface as some parents believe this concept relates to tenets of the highly politicized critical race theory. 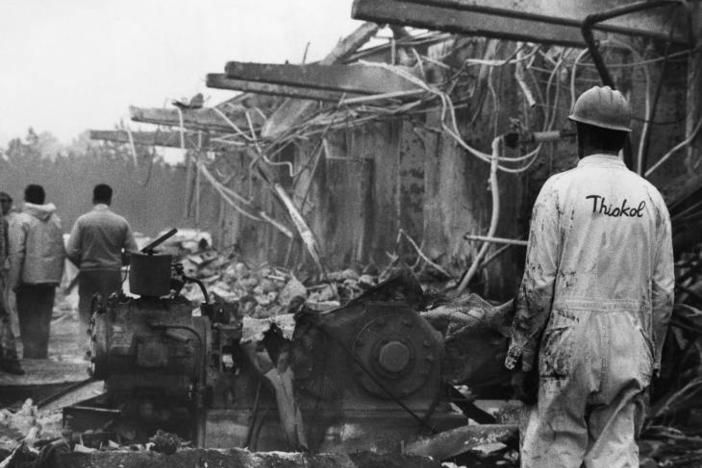