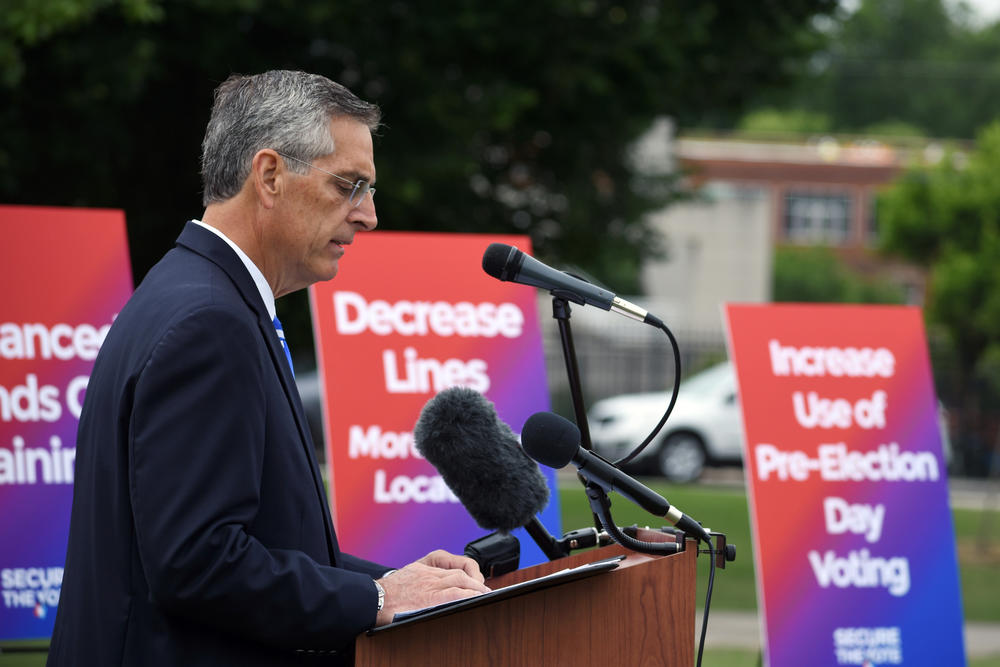 Republican Secretary of State Brad Raffensperger announced a four-part plan to improve elections administration ahead of the November general election.

Republican Secretary of State Brad Raffensperger unveiled a plan Wednesday to help Georgia elections officials better prepare for the general election and minimize the likelihood of long lines and problems at the polls.

“From our data from Election Day so far, approximately 70% of all the issues in the state were in Fulton County,” he said. “Fulton County’s issues are now conflated with Georgia’s elections overall in spite of the Georgia election officials and workers who have worked their fingers to the bone to bring us a successful election.”

Raffensperger asked the legislature to pass a measure that would allow the State Election Board, which he chairs, to intervene in the management of county elections.

During the June 9 primary, voters in metro Atlanta counties stood in hours-long lines, saw some polls open late due to problems with a new $104-million voting system and were left frustrated after newly trained poll workers struggled to implement backup paper voting protocols.

National attention swiftly turned to the state as Republicans and Democrats alike called for investigations.

Raffensperger’s plan focuses on four main areas of election administration, which largely mirror concerns reported by GPB News and the Georgia News Lab in the months leading up to the primary.

One is technical support.

Come November, he said, there will be a technician in every polling place, including people trained by the state and counties to work with the machines. The state’s top election official also said better hands-on training will cut down on problems with ballot-marking devices that may be human error.

Many poll workers in the state that backed out of working the primary are over 70 years old, the age category most at risk for coronavirus complications.

“While COVID-19 has not passed, most of us have a better handle on how to deal with it,” he said. “From the data we have, we will adapt our current training directly with counties to address what we saw on the ground as the most needed areas.”

Some poll workers had difficulties using the iPad check-in system that encodes a voter access card with the proper ballot for machines. Others did not plug in scanners and voting machines, a recurring problem reported since the pilot of the ballot-marking devices in last fall’s municipal elections.

Perhaps the most noticeable problem from the primary was long lines, exacerbated by social distancing measures and fewer places to vote because of the coronavirus pandemic.

“We know that we need a more diverse pool of voting locations to spread the load of voters that we are anticipating,” Raffensperger said. “We have a great MIT tool by professor Charles Stewart. It'll help you determine how to deploy equipment and gauge polling place volume so that issues like Park Tavern won't happen again.”

Finally, the secretary of state said Georgia would continue to push early voting options to minimize people at the polls.

MORE: Georgia Secretary Of State Says Shortest Line To Vote Is ‘At Your Kitchen Table’

Raffensperger said he won’t send absentee requests to voters for the runoff or November general election, but instead will build a portal similar to the state’s online voter registration system for voters to submit absentee requests. He said that will also cut down on the amount of work for counties that were overwhelmed by emailed and mailed applications while also preparing for in-person voting.

“Historically in the general election, we see about 50% of voters vote ahead of the election day, 50% on Election Day – we need to bump that number up,” he said. “Imagine what Tuesday would have looked like had we not had the absentee ballot program.”

In last week's primary, about 800,000 Georgians voted on Election Day, a number Raffensperger expects to triple in November. Overall, he said increased voter participation could see around 5 million people cast their ballots.