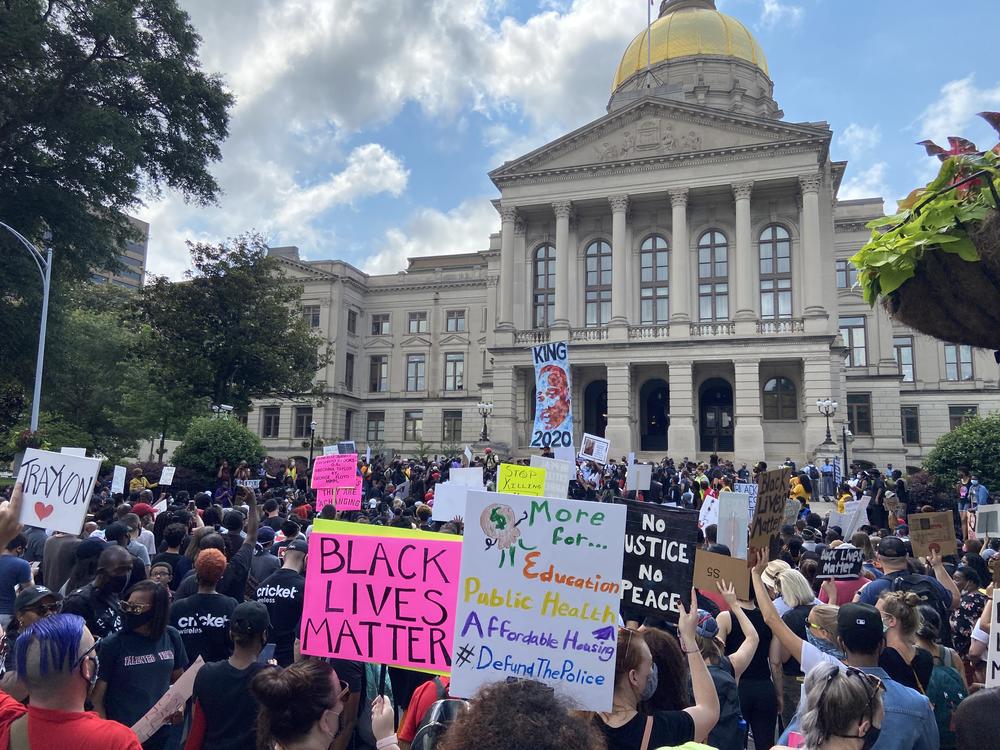 Hundreds of protesters on Monday marched through the streets of downtown Atlanta and gathered at the Capitol calling for social justice reform following the latest police killing and demanding better voting rights after last week’s problem-filled primary.

The protest came as lawmakers returned to the Capitol for the final days of the 2020 legislative session following a three-month hiatus due to the coronavirus pandemic.

The crowd chanted “No justice, no peace” and “I can't breathe.” They ticked off the names of black people killed in recent days, weeks and months. Ahmaud Arbery. George Floyd. Breonna Taylor. Rayshard Brooks.

“I’m not happy that our children still have to take to the streets to fight for their lives, but I am proud of them,” said Andrea Young, the executive director of the American Civil Liberties Union of Georgia. “I will fight for your right to express your First Amendment rights in this America that your ancestors bled and died for.”

She spoke on a stage with an NAACP banner that read: “THE LARGEST AND THE OLDEST, THE BADDEST AND THE BOLDEST.”

Protesters held so many signs it looked like a sea of social change messages.  “End 21st Century Lynching," one sign read. Another bore this message: “How Can We Vote for Change When You Won’t Let Us Vote.”

Rapper Young Jeezy was among the activists who kicked off the march at the Richard B. Russell Federal Building on Spring Street and made its way to the Capitol.

Things are underway with @jeezy. Leading a moment of silence for George Floyd, Ahmaud Arbery, Breyona Taylor and Rayshard Brooks. “This is not a moment, it’s a movement.” #gapol pic.twitter.com/VdOJhNqxx7— stephen fowler // voting+georgia politics (@stphnfwlr) June 15, 2020

The “March on Georgia” rally was spearheaded by the NAACP and organized with a focus on ensuring “criminal justice reform, repealing citizen’s arrest, stopping voter suppression and ending police violence against our communities.”

Wade Cook, a college student from Snellville, said he marched because the younger generation has to take action to stop racism and the deaths of black people nationwide.

“That’s why I’m marching because I have to be a part of this -- because these are my people getting killed every day,” he said. “This is in my control and it’s in my control to stop it.”

Cook held a sign calling for the repeal of Georgia’s citizen’s arrest law. “I’m a young black man and this needs to end. I am disgusted by this,” he said. “It’s happening almost every day, and we become accustomed to it.”

After two weeks of protests following the police killing of George Floyd in Minnesota, Atlanta erupted again over the weekend after Rayshard Brooks, a 27-year-old black man, was gunned down Friday night in a Wendy’s parking lot after a scuffle with police.

The killing led to the resignation of Atlanta Police Chief Erika Shields and the firing of Garrett Rolfe, the officer involved in the shooting.  Angry protesters torched the Wendy’s Saturday night.

The March on Georgia protest had been announced prior to Brooks’ death but gained even more traction after the weekend’s events.

Enraged over another death at the hands of police, protesters demanded lawmakers take action to reduce police violence, repeal the citizen’s arrest statute and fix problems with voting that led to hours-long lines in predominantly black precincts in last Tuesday’s primary.

Beginning at 9 a.m., protest leaders guided the determined group through downtown to the Capitol. The demonstration stretched over a city block outside the Capitol as legislators began to convene inside the newly disinfected building to begin days of debate over a state budget crippled by the economic fallout from the pandemic.

Just before noon, Woodall and a group of several dozen demonstrators gathered in the Capitol rotunda, singing, praying and calling on lawmakers to act immediately on the bill as Georgia State Patrol officers kept watch.

Protesters also demanded solutions to voting issues that plagued last week’s disastrous primary, which saw wait times as long as eight hours in some locations and a myriad of other voting problems affecting predominantly minority communities.

Referencing last Tuesday’s election fiasco in a speech to protesters, DeKalb County CEO Michael Thurmond condemned Secretary of State Brad Raffensperger and implored the crowd to “tell Brad either do your job or be gone from the secretary of state’s office.”

“And when you go vote, I want your feet to resound like the pitter-patter of Joshua’s Army,” he said. “I want you to march around the voting booth, and I want you to bring down the wall of racism, of hatred, of police brutality.”

Wanda Mosley of Black Voters Matter called the primary’s long lines and equipment problems a failure on the part of the secretary of state.

“Our most sacred right as Americans is under attack by our own government,” Mosley told GPB News. “Our secretary of state is derelict in his duties. He is the chief administrator over elections, and he is the one who is responsible for all the issues that we saw on Tuesday.”

According to Woodall, the issues of voter suppression and police brutality go hand-in-hand. Woodall said he anticipates demonstrators will return to the Capitol every day until lawmakers are done.

“This is not a sprint. This is a marathon,” he said. “If we have to show up every single day during the legislative session, that’s exactly what we’ll do until there is action. And if there is no action, then there will be no peace.” 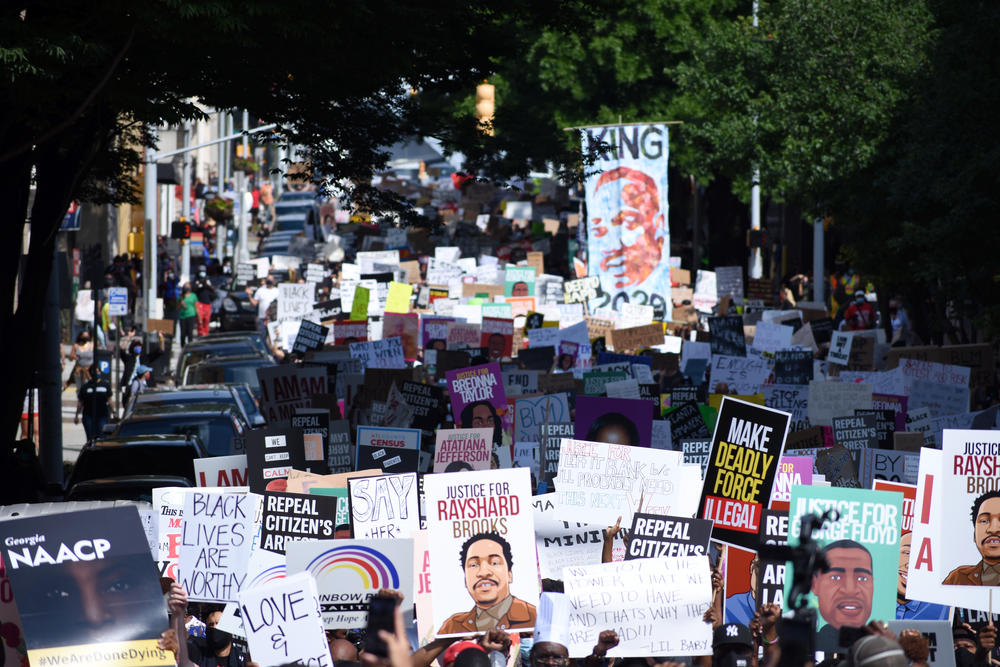 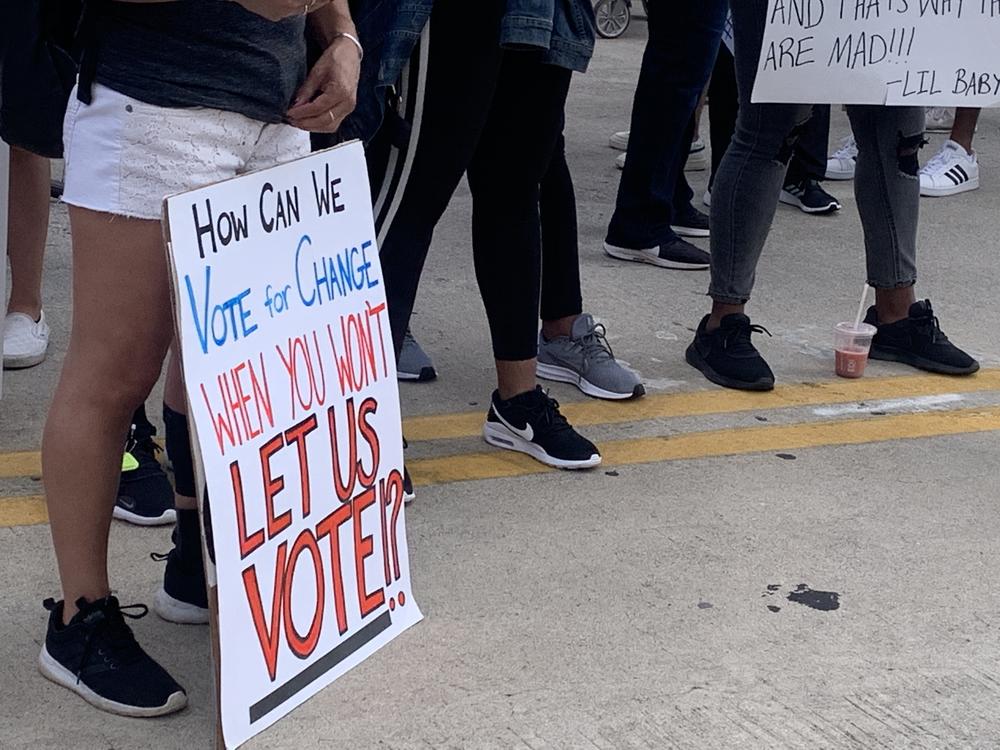 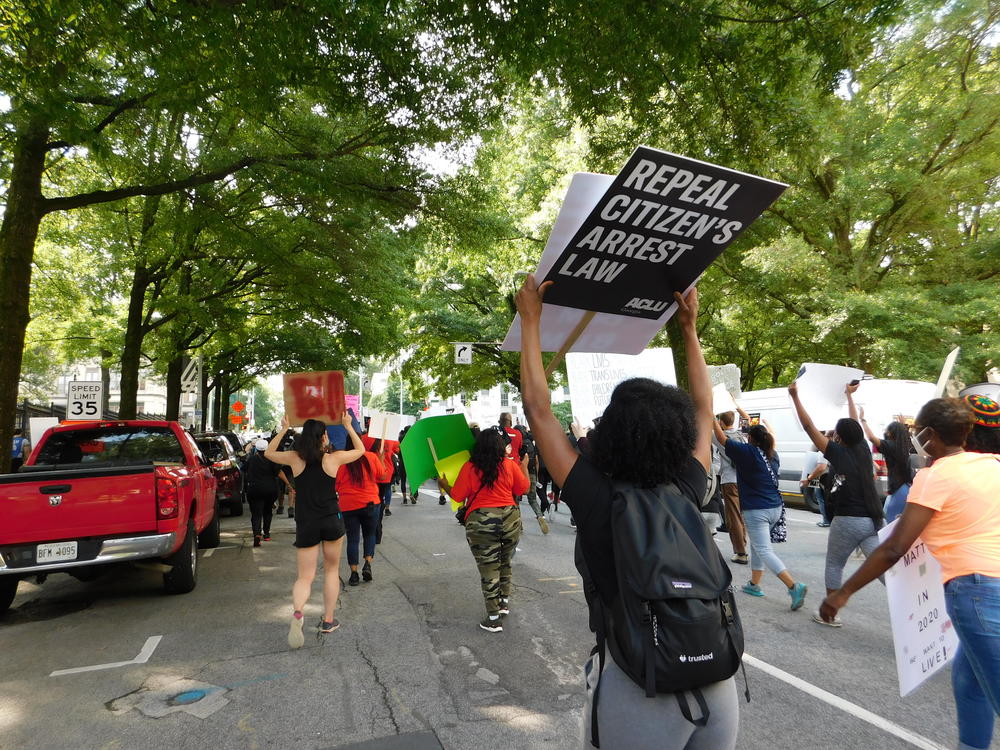 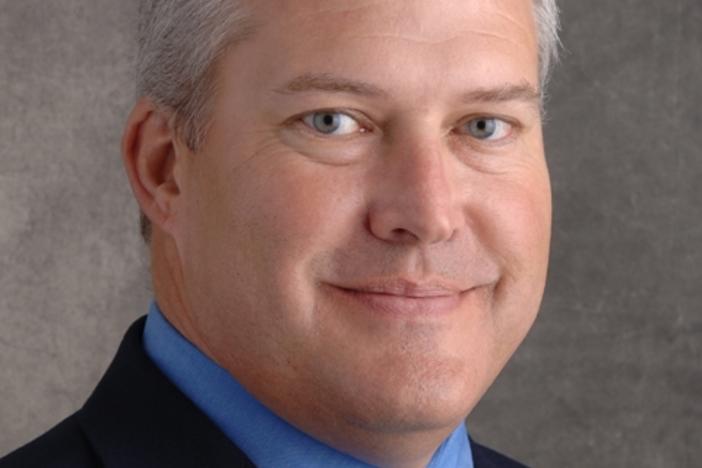