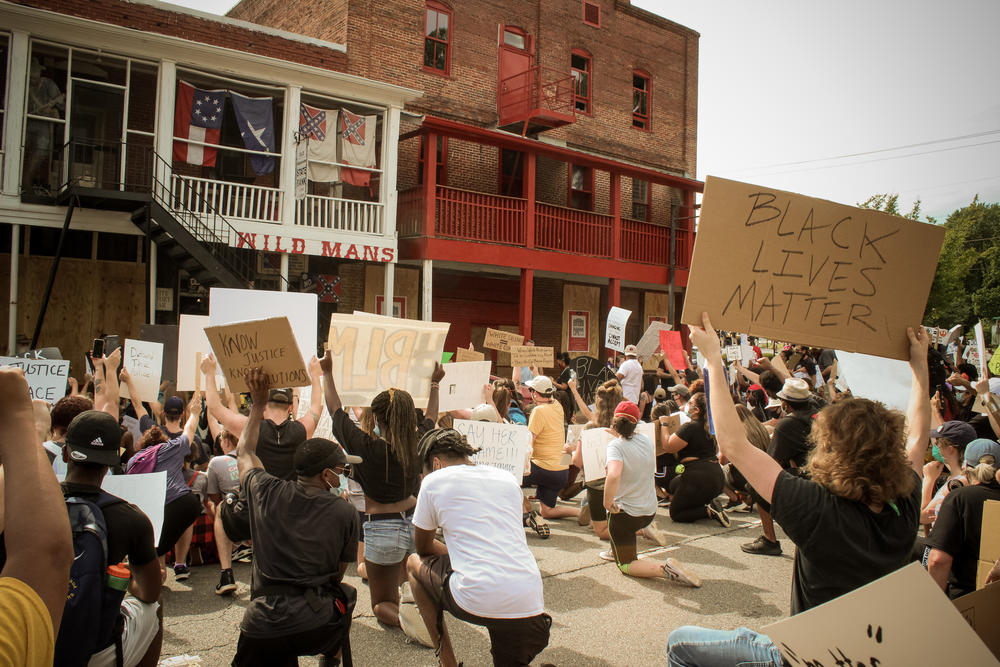 Protesters kneel outside of Wildman's Civil War Surplus in Kennesaw on Sunday.

Driving through the historic part of Kennesaw’s downtown area, Wildman's Civil War Surplus store has always been hard to miss. Several iterations of Confederate flags loom from the upper balcony. A sign reading "WHITE HISTORY YEAR" greets visitors next to the front door.

The store has stood in the same spot for nearly 50 years, its owner always claiming Wildman’s and its Ku Klux Klan and Confederate artifacts represent an important part of history. The store has now become the focal point of protests in Kennesaw, with hundreds of peaceful demonstrators gathering outside, taking a knee and calling for racial justice.

The store’s owner, Dent "Wildman" Myers, brushes aside their concerns, saying the protesters are part of a larger movement to incite "racial insurrection."

“They have small mentalities,” he said. “They have no concept of history.”

In an interview with GPB News, Myers insisted that he is not a racist ⁠— only a steward of preserving history.

The store has been cemented in local folklore almost since the day it opened in 1971. The Kennesaw Historical Society awarded Wildman’s a Historic Preservation Award in 1993. Myers also made a cameo appearance in a local 2002 production of The Nutcracker.

Walking through the store, of course, makes the claim of simple historical preservation questionable.

On a display in front of the counter is a leaflet that reads "The Myth of Racial Equality" as its title.

Racial epithets are scattered throughout the store on signs. A Ku Klux Klan robe is featured in the back. There are dolls of black men and women, some eating watermelon, placed next to two old passes from the popular black celebration Freaknik, which used to take place in downtown Atlanta in the '90s. There are T-shirts featuring illustrated Klansmen with the words "Boyz in the Hood" below it.

The attention around his store is hardly anything new for Myers. Over the years, he's been the subject of features in The New York Times, the Canadian Globe and Mail, and The Daily Mail, in addition to countless local stories. He was quick to show off a scrapbook of all the newspaper articles written about him from around the world, scattered amidst news clippings about the Ku Klux Klan.

"I got my opinion, I should be able to have it," he said. "But apparently, I've got the wrong one and somebody has the audacity to attempt to change it."

What has changed, however, is the city of Kennesaw, a bustling exurb 30 miles north Atlanta. New apartment developments, restaurants, and bars now fill what used to be a quiet stretch of South Main Street in the historic part of town. Cobb, formerly a staunchly conservative county in Georgia, voted Democratic in the 2016 presidential election.

Kennesaw State University has expanded through the city, as well. What started as a night school in 1953 now sports a football team, two campuses, and over 35,000 students.

Now, the national protests around George Floyd's death have sparked something that the city has never seen before.

Several hundred people, many of which were KSU students, gathered outside the shop in a series of demonstrations over the last week holding signs in support of the Black Lives Matter movement and calling out the store for its racist memorabilia.

Ezra Trotman, a senior at KSU who participated in one of the protests, believes the attention towards Wildman's is indicative of a wider effort in Kennesaw to reexamine and challenge the city's identity by a new generation.

"I think it's powerful when we are not silent and finally speaking about things that have been brushed under the rug," Trotman said. "This store has been here for five decades and we're just now calling it out?"

Murice White, who is a carpenter and musician in Cobb, also attended the protest on Sunday.

"To say it's a younger generation in Kennesaw looking inward on itself, that's an understatement," White said. "Volcanoes can be dormant for a long time, and then it finally decides to blow because there's too much pressure. This is that time."

Kennesaw City Council member David Blinkhorn, himself a KSU alum, sees the engagement from younger people in the community as a positive sign of the city's growth and evolution.

"I think it's a good thing, I really do," he said. "This cause is so important and it's exciting that it's being led by the younger generation demanding the older generation listen to them, and they don't often do that."

When the question of Myers and his store is raised, Blinkhorn believes the protests have a valid point in criticizing Confederate and other racist imagery still lingering today among some Southerners.

"The bottom line is this: whatever the protest is, it's about getting rid of racism," he said. "If it means removing those symbols within the community, then so be it."

For Trotman, the protests are the result of a generation who have been told to accept the status quo for too long, whether its long-standing physical establishments or something more systemic.

"We've been silent and told not to say anything out of fear," Trotman said. "That time is over and now we have the courage."

Even walking through downtown Kennesaw on a day after the most recent protest, there is something different about the city. Across the street at Eaton Chiropractic, a message of solidarity with the protesters is written in marker on their window.

"We understand we will never understand," it says.

Wildman's building stands alone. Younger generations have now made it clear that they, rightfully, care little for the vestiges of the Old South. They look toward a future they hope will be more equitable. Myers, in a way, seems to acknowledge the change.

"My opinion won't be there forever," he said, standing behind the worn counter of his store. "One day, I'll be gone." 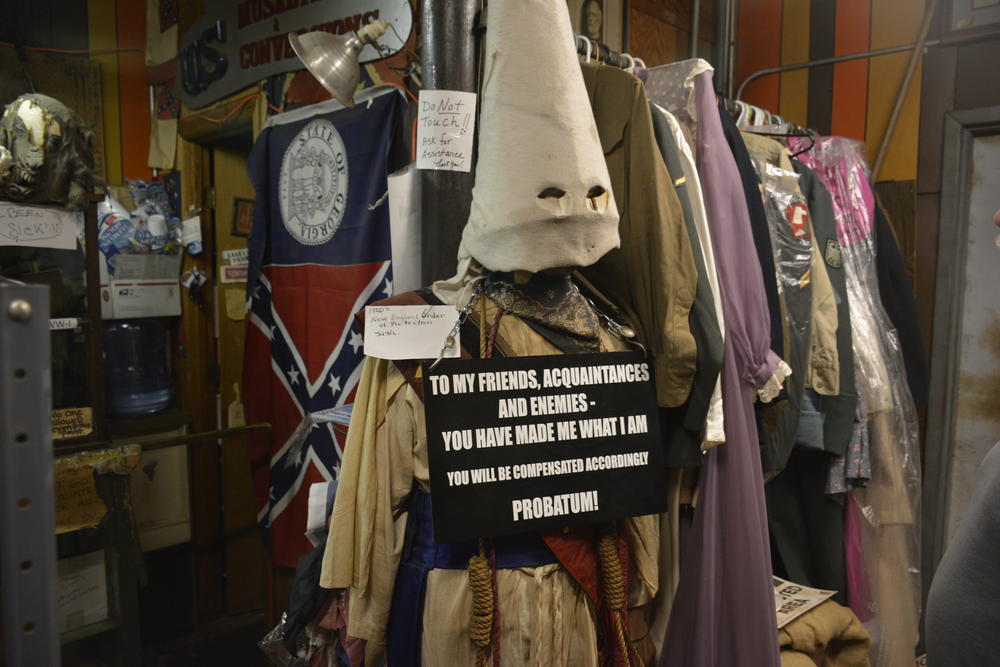 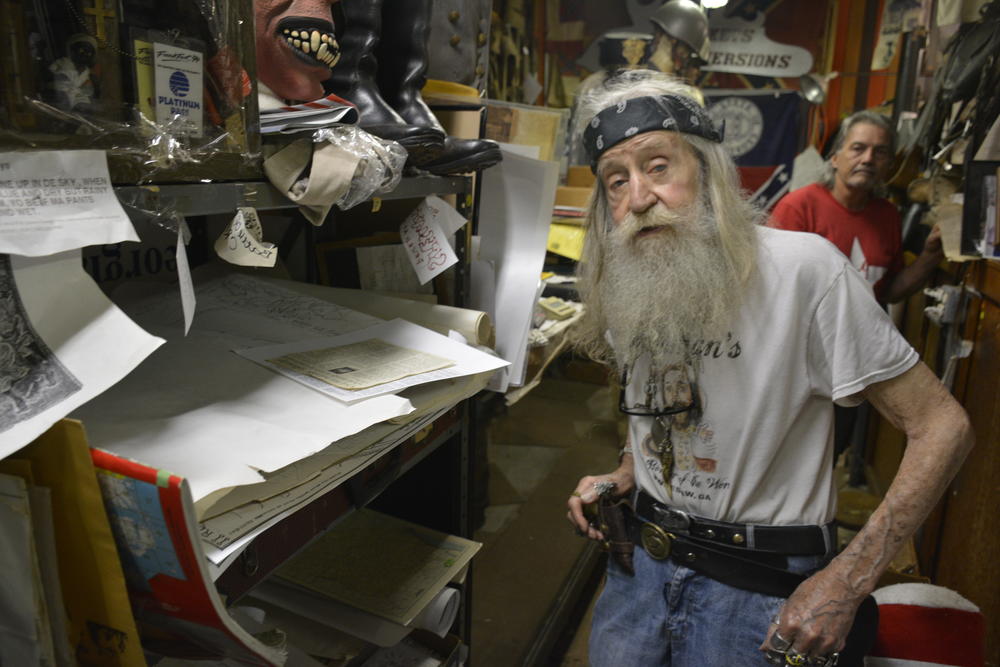 "I got my opinion, I should be able to have it," Myers said. "But apparently, I've got the wrong one and somebody has the audacity to attempt to change it. My opinion has been there forever." / GPB News 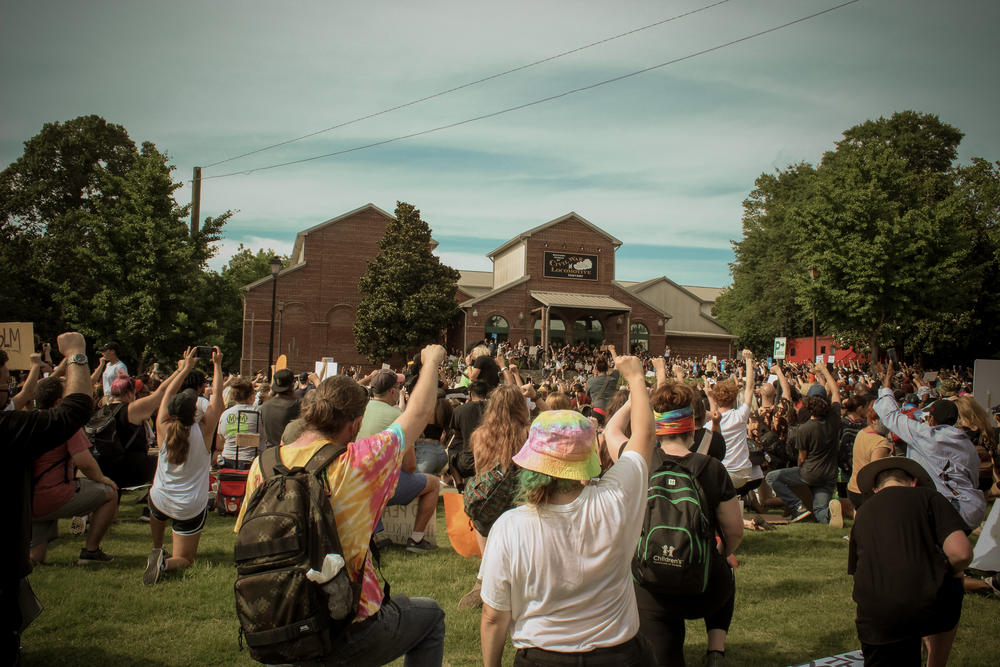 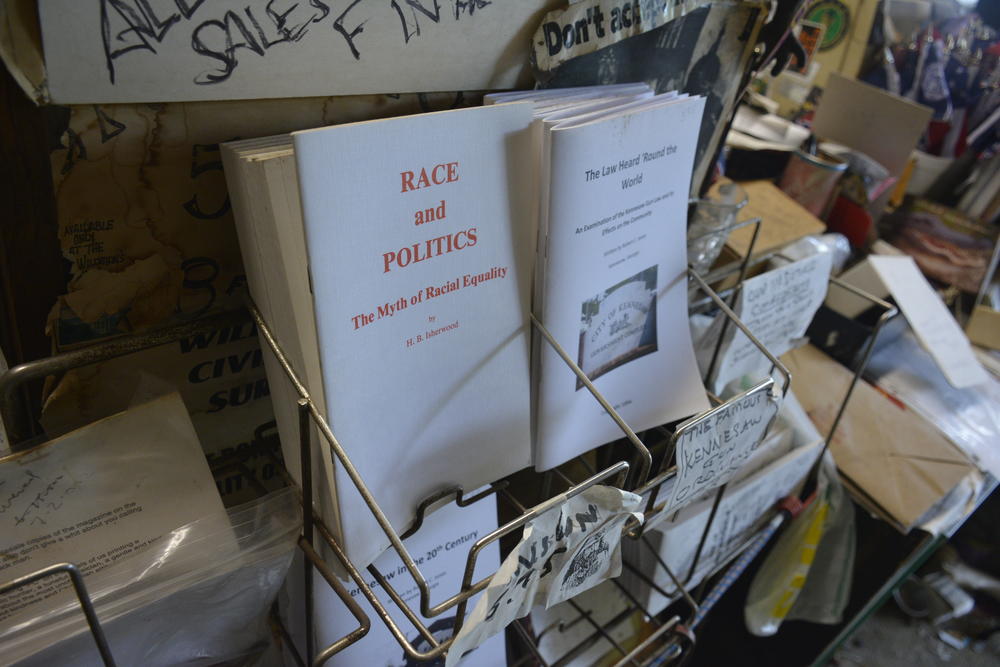 A pamphlet titled "Race and Politics: The Myth of Racial Equality" in Wildman's. / GPB News 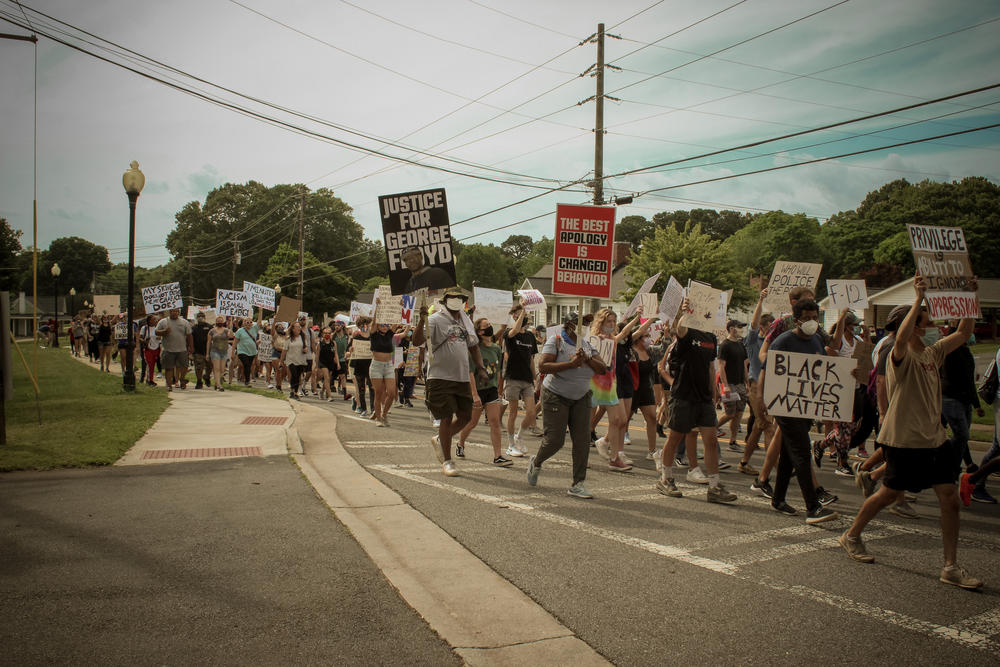 Protesters march in Kennesaw on Sunday. 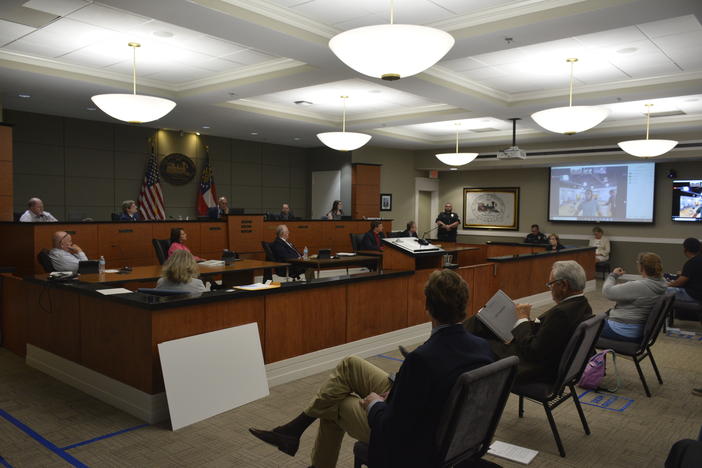 Former Kennesaw City Council member Jimmy Dickens stood in front of the city council Monday night with a plea for its members and the mayor. Across the... 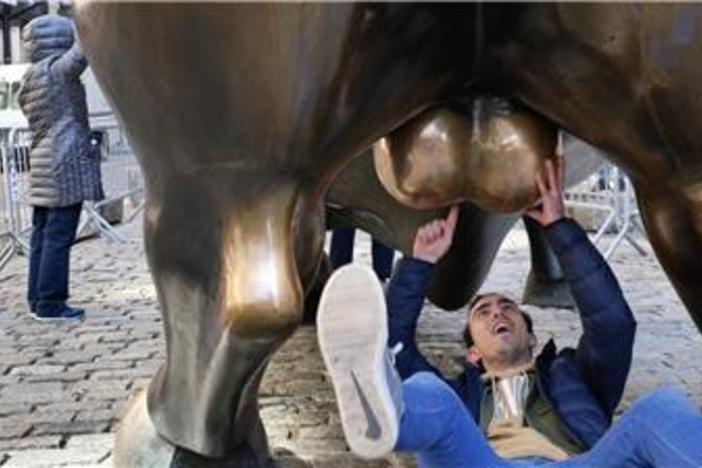 'Most checked balls' campaign promotes self exams for testicular cancer. Here's what to check for

Testicular cancer is most commonly diagnosed between the ages of 15 to 34. But new research from The Testicular Cancer Society reveals 4 in 10 Americans with testicles never perform self-examination checks. 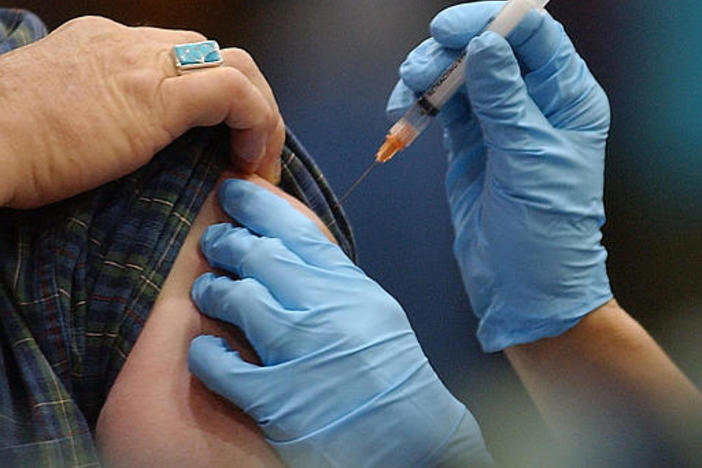