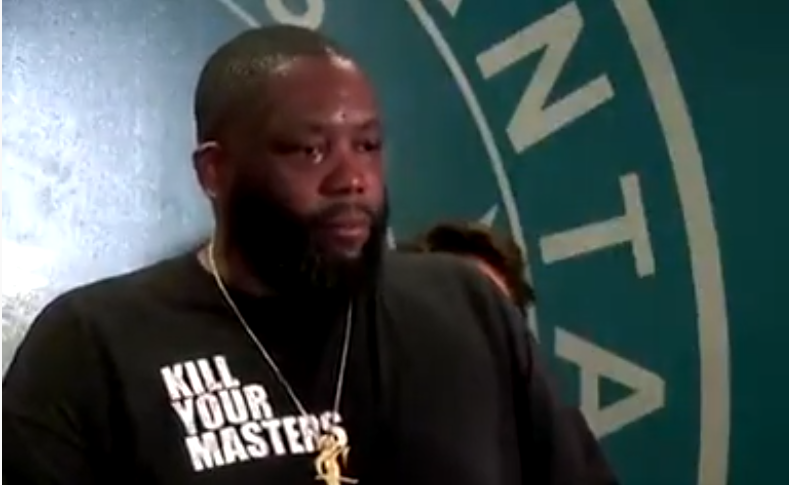 While Michael "Killer Mike" Render stood next to the mayor and other city officials Friday, May 29, and pleaded for Atlantans to not "burn their own house down," some on social media were quick to point out that his T-shirt read "KILL YOUR MASTERS" in big block letters.

"Choose the lesser of the evil people, and the devil is still going to win," Killer Mike raps on the song "Kill Your Masters."

"It could all be over tomorrow," he recites. "Kill our masters and start again."

The phrase itself isn't new to those who are familiar with Killer Mike's body of work as a hip-hop artist.

In addition to making music as a solo artist, he raps in the collaborative duo Run the Jewels alongside New York emcee Jaime "El-P" Meline.

The song "Kill Your Masters," featured on their 2016 album Run the Jewels 3, is a fiery and direct song that holds no punches. It also features a verse from Zach de la Rocha, former vocalist of Rage Against the Machine and a politically outspoken musician in his own right.

"I disabuse these foolish fools of they foolish views," Render says in the song. "I heard the revolution coming, you should spread the news."

The duo unexpectedly released a new album, Run the Jewels 4, in a surprise announcement on Twitter Wednesday afternoon.

Devin Barrington Ward, a candidate for Georgia State Senate, believed there was a broader message to Render's choice of shirt.

"The 'master' is a form of government right now that allows for the oppression of black people," he said. "It allows for cops and other law enforcement agencies to engage in terrorism on the black community."

Ward cautioned against interpreting Render's shirt as a call to actually kill people. Instead, he believed the phrase carries a broader message of systemic change.

PREVIOUS COVERAGE: Atlanta's Killer Mike: ‘It Is Your Duty Not To Burn Your Own House Down’

"There's a phrase, 'the master's house cannot be dismantled using the master's tools,'" King said. "It's the same concept."

For King, the phrase resonates because they believe so many have turned a blind eye to the broader issues that have faced black Americans for decades.

"There is an entire system that people don't believe exists and it absolutely does," they said. "We want that system dismantled. We want it, well, burned to the ground. And I agree."

While Ward understand the message on Render's shirt, he said he was disappointed with what Render actually said during the press conference.

During his emotional speech, Render called on city officials to create an independent board to review police conduct.

Atlanta activist and organizer Skylar Burks, however, thought the shirt's message was counterproductive.

"I feel like it's kind of the same sentiment as 'eat the rich,' but I don't know if that's particularly the most helpful way to go about this," she said.

Burks believed that Render's shirt was counterintuitive to the narrative of nonviolence he spoke of during the press briefing.

"We can not stoop to their level," she said. "I think that someone with such a position of power, and especially a pop culture figure, should not be sharing that message."

Ward hopes Render will use the newfound attention to continue putting pressure on the city government.

"My hope is that Killer Mike will continue to put pressure on the mayor," he said. "The only way that people will get out of the streets is when public officials start making decisions that are in the interest of the entire public."

The shirt itself is a variant of official Run the Jewels merchandise sold by clothing distributor Daylight Curfew, which retails for $28. 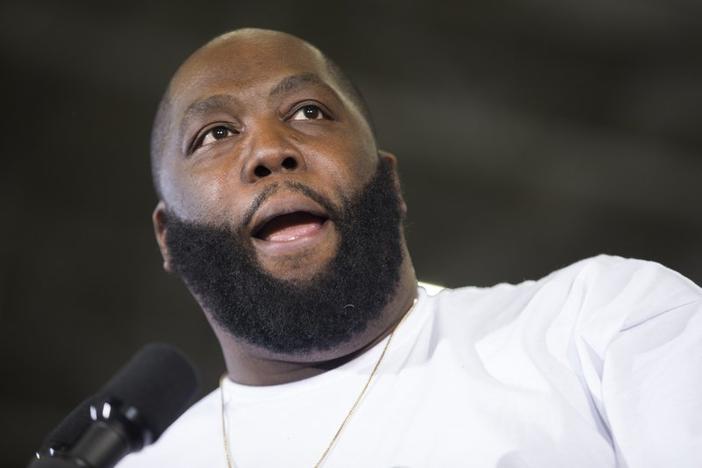