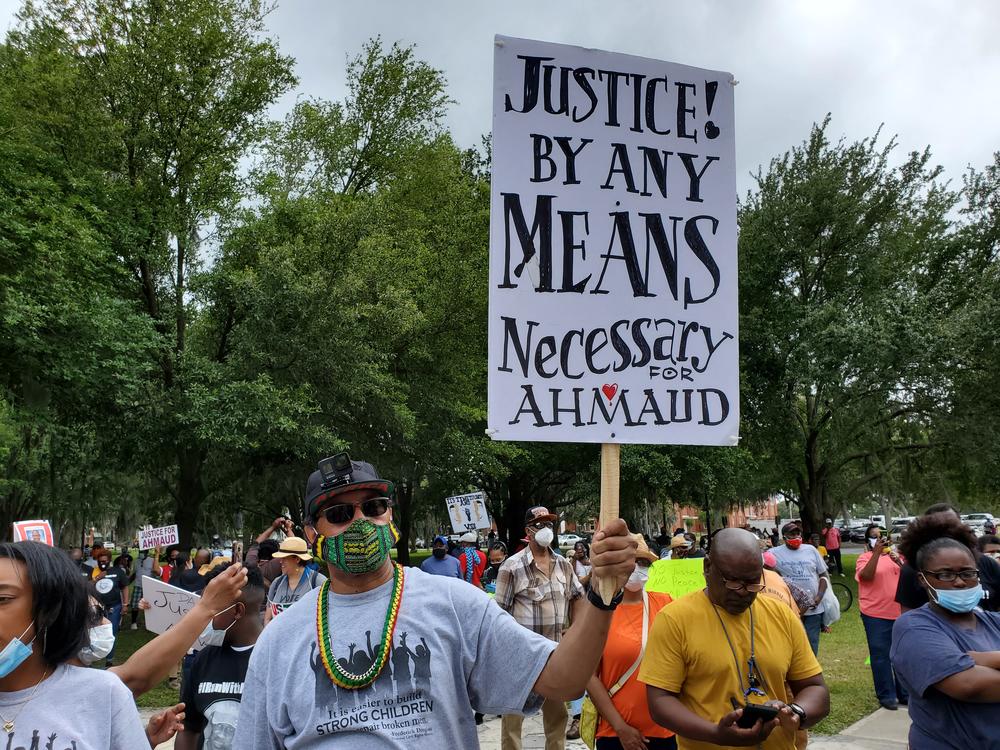 Caption
Protesters call for justice in the killing of Ahmaud Arbery. They say one of the suspect's ties to local law enforcement delayed his arrest.

The men charged with the murder of Ahmaud Arbery will appear in court in Brunswick Thursday. One of them, Greg McMichael, was the chief investigator in the Brunswick Circuit District Attorney’s Office for more than 20 years. DA investigators play an important role in the criminal justice system, but less well-known than police and prosecutors. A look at the role and powers of District Attorney's investigators, the job Greg McMichael held for more than 20 years.

It took more than two months for authorities to arrest Greg McMichael and his son for the killing of Ahmaud Arbery. Many feel that’s because he had ties to law enforcement.

At protests, they’ve called it "corruption" and a "cover-up," and accused police of protecting their own.

The Brunswick DA recused herself from the case because of McMichael’s work in her office. The DA from a neighboring circuit also removed himself, because his son works in the Brunswick office.

The case is now in the hands of Cobb County DA Joyette Holmes.

“I have today with me my chief investigator Charles Prescott ... as well as the Deputy Chief Investigator Richard Randolph” Holmes said when she addressed reporters after a third arrest was made in the case. “They have been working with the agents and the Georgia Bureau of Investigations to get to this point.”

Peter Skandalakis of the Prosecuting Attorneys’ Council of Georgia said these investigators help DAs like Holmes flesh out cases before trial.

“Is there more information out there that will help you build that case up to the point where hopefully you can negotiate a plea? If you can't negotiate a plea, if the case goes to trial, you have sufficient evidence to prove the defendant's guilt beyond a reasonable doubt,” he explained.

Skandalakis said how exactly the investigators work on cases varies a lot among different DA’s offices. Some actively investigate and interview witnesses. Others have more of a support role.

As the Brunswick Circuit chief investigator, according to personnel records, Greg McMichael served subpoenas, obtained reports and documents from other agencies and tracked down witnesses.

“But did they ever actually arrest somebody? In my eight years there? No, I'm not aware of anybody that was arrested by an investigator,” he said.

DA investigators are required to have Peace Officer Standards and Training, or POST, certification. McMichael fell behind on the required training hours for five years, he said because of medical and family issues. As a result he lost arrest powers from 2006 to 2014.

One consistent piece of a DA investigator’s job is serving as a liaison between the DA’s office and police departments. According to personnel records, McMichael did that daily.

Marissa Dodson is a defense attorney and works for the Southern Center for Human Rights. She said it makes sense that DAs, their investigators, and police often work together. But it can be a problem when DAs are asked to prosecute cops.

Protesters in Brunswick feel McMichael’s association with police is exactly what delayed his arrest.

"That relationship of privilege played a part in all of this,” one said from the podium last month, to cheers from the crowd. “Those that arrived on the scene, because of relationship, at least took their word instead of doing a thorough investigation."

The protesters are calling not just for the conviction of Greg McMichael and his son, but for the removal of the District Attorneys they feel protected the McMichaels.