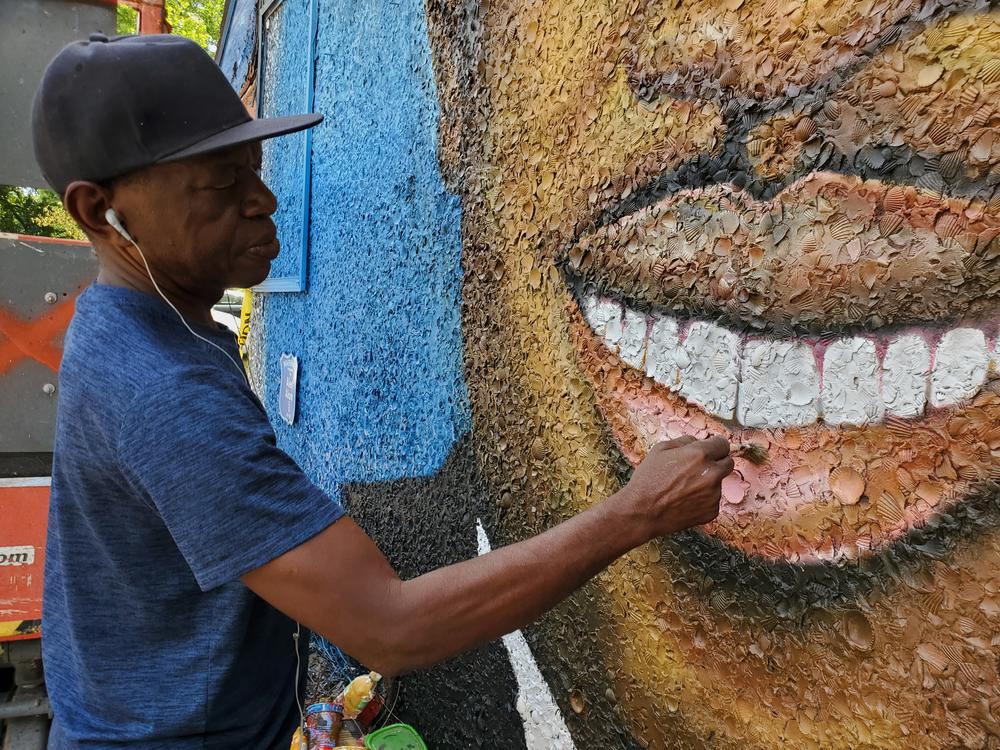 Artist Marvin Weeks paints a mural of Ahmaud Arbery on the side of the future Brunswick African American Cultural Center.

Ahmaud Arbery quickly became a household name after graphic video of his murder became public. He is a hashtag, a chant, and with Breonna Taylor and George Floyd, one of the latest faces of a movement for racial justice. Literally: his picture, smiling, appears on protest signs, T-shirts, and countless social media posts. And now, his face has become a mural in Brunswick, Georgia.A new mural in Brunswick, Ga. aims to cement Ahmaud Arbery's place in history.

Just a few blocks from the Glynn County Courthouse, where hundreds of people have been protesting over the death of Ahmaud Arbery, there’s a vacant two-story building next to an open grass lot. It’s been empty for some twenty years, but is now slated to become the Brunswick African American Cultural Center.

“This isn't new. This is a rebirth,” said Dana Roberts Beckham, who led the fundraiser to sponsor a mural on the side of the building.

On top of money, many people have donated time and elbow grease.

“The community has come out to help clear this lot,” she said. “This was a disaster building. Everything on it was covered.”

It was covered in weeds and vines, the front windows boarded up. Volunteers of all ages helped clean it all up, and the city cleared off the overgrown sidewalk pavement.

When you walk that sidewalk now, you’re greeted by Arbery’s face, taller than the outdoor steps to the second floor, smiling out from the side of the building.

Artist Marvin Weeks lives and works in Miami now, but he felt called back to his native Brunswick to paint this mural.

“I don't think that there'll be a total understanding until you understand the long history in this community,” Weeks said.

Some of that history is in the wall itself. It’s coated in a 20th Century version of the oyster shell-and-concrete blend known as Tabby, which enslaved people in the region used in building beginning in the late 1500s.

Arbery was descended from those slaves. Now his face is painted on a Tabby wall.

Weeks also carries some of the history himself. He grew up here in the 1960s.

“We were little boys, my brothers and I. And there were times that we were, there were people in pickup trucks would come up to us and tell us where were we going?” he said. “And they would pick at us.”

In February 2020, Ahmaud Arbery was jogging in a neighborhood outside Brunswick when white men confronted and shot him. The video of the shooting shows the men waiting for Arbery in a pickup truck — a detail that particularly struck Weeks.

“So the pickup truck definitely remind me as the pickup truck that would follow us to the Selden Park and to go and enjoy ourselves,” Weeks said. “So this was an ongoing type of harassment that many people in this community could relate to.”

When the building featuring the mural becomes the Brunswick African American Cultural Center, Aundra Fuller will be executive director.

“This is our hometown and we saw our history not being preserved,” Fuller said. “We saw our neighborhoods in disrepair. There is not one central location where you can go to find anything about the history of Brunswick African Americans.”

She plans to make the center a gathering place — like it was when muralist Marvin Weeks was a kid — as well as an archive museum. Fuller hopes to give young people a sense of pride and hope for the future.

“We remember when our neighborhood was a vibrant, thriving family, community neighborhood that, you know, turned us into the people that we are today, productive adults,” she said. “And that's what we want our children to have.”

Fuller said there’s still work to do to bring the building up to code before the cultural center can open.

In the meantime, Ahmaud Arbery’s face is painted on the wall, larger than life and impossible for anyone walking or driving by to miss.

“It probably will serve as the elephant in the room that we need to have a discussion,” Fuller said. “That something is going on.”

That something, she said, is racism.

Volunteers cleaned up the building and future site of the Brunswick African-American Cultural Center, now home to a mural of Ahmaud Arbery