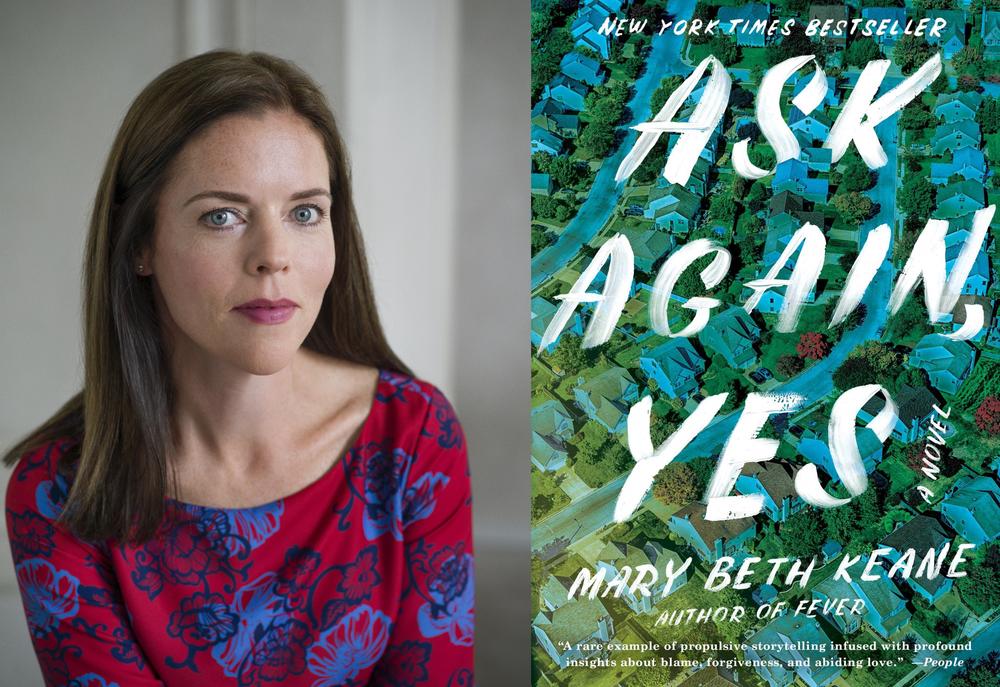 Mary Beth Keane’s 2019 novel Ask Again, Yes was an instant New York Times bestseller, and is now out on paperback.

The book follows the families of two New York City police officers who live next door to each other in a suburb north of the city – and a tragedy that divides them and their children over four decades.

It’s a story of mental illness, addiction and – ultimately – forgiveness. The story is narrated primarily through four characters: Francis Gleeson, Anne Stanhope (who is mentally ill), and their children, Kate and Peter, who fall in love.

Given the animosity between their families, there’s also a Romeo and Juliet subtext, even if not planned that way.

“I don't think that I thought of [the Romeo and Juliet connection] quite that consciously, but I did have a sense of a coming together,” Keane explained. “You know, this real classic romance in the sense that there were obstacles that they had to overcome and then they overcame them.”

“I actually wrote a whole draft without entering Anne's point of view just because I was really afraid of getting it wrong,” Keane said. “And at some point I just had to try going there because I realized if I only looked at Anne from the outside, the reader would not have as much sympathy for her as I wanted them to have.”

And, as opposed to the extreme renderings of addiction often depicted in art and culture, Keane also wanted to show alcoholism in a more realistic way.

“I think that I had read and seen too many depictions of the fall-down drunk who loses everything,” she explained. “And I was way more familiar with the functional alcoholic who can somehow, by some miraculous thing, get up and go to work the next day.”

Keane says that she is also fascinated by how trauma presents itself differently in different people. Some may be able to speak openly about their struggles; she’s more focused on the ones who can’t.

“I'm always interested in characters who are not that articulate about how they feel,” she said. “I was really attracted to the type of character who might say a thing and even think a thing, but then feel a completely different way. That conflict to me is really interesting.”

And through this deeply engaged writing process, as well as the tours and continued conversations after a book is completed, Keane develops a connection to the characters from her novels.

“I think they're all just going to be with me for the long haul, maybe,” she said.

This audio is an edited version of the conversation, but you can hear (and watch) the full interview here.

I think that writing is a lot like acting, you know, from what I can gather about method acting. I don't know if I'm offending any actors by comparing those things, but I really tried to be each character in a particular moment in time and think the way they would think if I had certain experiences and if I had a particular world view. Anne Stanhope was probably the most difficult character to get down because she suffers from mental illness – a mood disorder, as one doctor told me to describe it. You know, a diagnosis changes over time. And what we described one way in the 1970s, we would use totally different words to describe now. And that was one of the main challenges of the book: is to be sort of respectful of the illness while also, you know, honoring the way that people were and the way they thought in particular moments in time – ‘70s, ‘80s, ‘90s, now. We've come a long way and we talk about mental illness differently now. But, you know, there's still a long way to go.

I guess I just started mulling that over and how you kind of live one happy-go-lucky life at home in the suburbs, and one not happy-go-lucky life on the job. I mean, they really are their own ethnicity in a way, police officers; they speak their own language. A lot of times they only understand each other. They have their own traditions. And, you know, they're closed off to outsiders to an extent. And I think that my privilege was my access. I just knew these people. They knew me from growing up. […] They get a kick out of the fact that I write books – and these books are sometimes in The New York Times, things like that. And so I was able to text them and say, “Would you meet me for a plate of eggs and bacon? And I have a couple of questions for you.” And some of them – particularly the retired detectives from like the 70s, 80s era – were great. They're great storytellers. The thing is, every cop story is really polished. You know, I can tell when they're used to telling a story and they've told it 100 times; sometimes I wasn't really interested in that kind of thing. You know, what I wanted to know was how they felt, how conflicted they felt about maybe their power and their position. And I think a lot of the people I talked to weren't used to talking in that way.

On the kinds of characters Keane is most interested in writing

I'm always interested in characters who are not that articulate about how they feel. You know, I felt like a fish out of water, I think, when I got to college and I was with people whose parents had written books and had been on television; I went to Barnard College in New York City. And I was of a family that didn't have any of those things. My dad was a construction worker. I didn't really identify with the reading that I was given in English literature classes. And so, you know, I appreciated it and I learned from it. But when I started writing, I was really attracted to the type of character who might say a thing and even think a thing, but then feel a completely different way. That conflict to me is really interesting. About the trauma, I mean, I think that that's the whole thing. That's the center of the book: that some people are able to say, “This happened to me and this really hurt me” and some people are just not able to do that – for a whole host of reasons. And I am way more interested in the second type of person. You know, trauma is a hard thing. It looks differently in different cultures.

On why Keane wanted to write about alcoholism

Alcoholism was something that really hit me, I think, when I hit 40 a couple of years ago. You know, it's a mystery to me why some people get out alive, and some people don't. I had my first drink young; it was just the way that we grew up around here and I know that I don't have a problem with alcohol. I don't know why. And I know some people who grew up the same way I did and who really do. And I can't figure it out, even now, but I just started thinking about it more and more. You know, I feel like everyone was getting along, you know, and you'd have your moments and we'd sort of laugh about a big night out. But then at a certain point, there were some people who just could not stop. And I don't know how I got lucky, but it's something that still troubles me, honestly. It's really interesting to me who seeks help and who doesn't, who admits they have a problem and who doesn't, what alcohol means to different people and why. And I do think about it a lot, but I don't think I thought about it my whole life. I think it's something I just noticed, you know, when I hit a certain age.