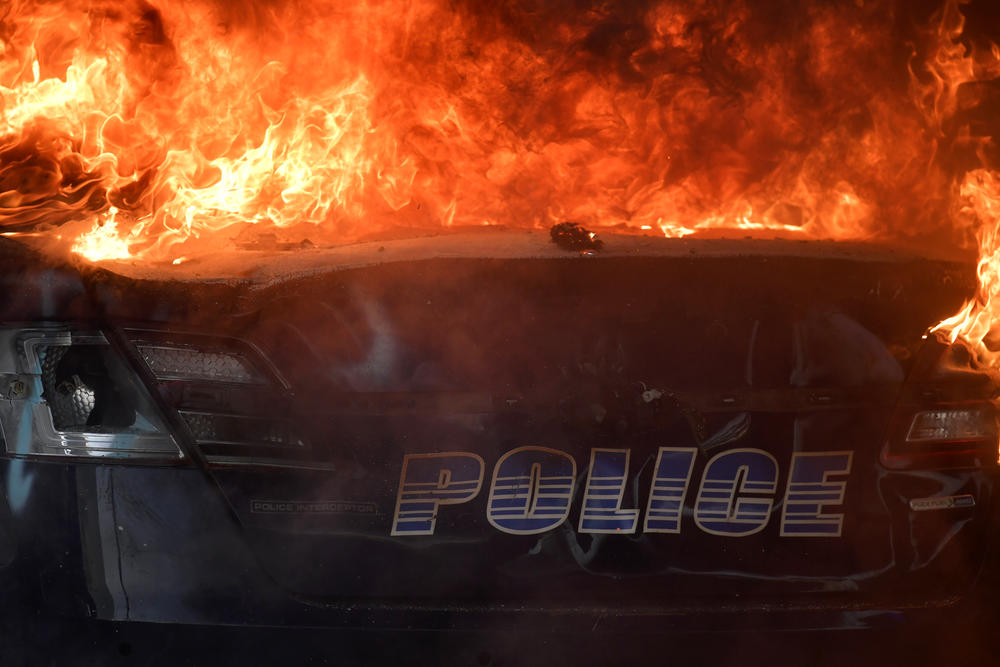 An Atlanta Police Department vehicle burns during a demonstration against police violence, Friday, May 29, 2020 in Atlanta. The protest started peacefully earlier in the day before demonstrators clashed with police. / AP

Anger, sorrow and fear can be felt around America as demonstrators demand justice in the recent killings of Ahmaud Arbery, George Floyd and Breonna Taylor. After days of protests in Minnesota and Kentucky, hundreds of people are now gathering downtown in Atlanta.

The march began about 4 p.m. and people walked from Centennial Park to the State Capitol before heading back. Things started to get tense around 5:30 p.m. in front of the CNN Center, and by 8:15 p.m. a police car was on fire and several other cars were damaged. By 10 p.m. many people had gone home but several people remained in the streets and a second Atlanta police car had been set on fire.

"If you care about this city, go home," Bottoms said.

9 p.m.: The crowd is again asked to disperse. Atlanta fire officials have extinguished the police car on fire.

#ATLFORUS to the man standing on the burning car.. your heart outweighed your brain on that one. Love the passion though!— Brittany (@HurricaneKarenn) May 30, 2020

8:30 p.m.: Fulton County police buses are arriving as police prepare to make arrests and disperse the crowds. Protesters are also seen breaking windows at the CNN headquarters in downtown Atlanta.

7:30 p.m.: Several people run from the CNN Center, but large crowds remain in the area.

7 p.m.: People are seen spray painting words on the CNN logo outside the CNN Center. Two people climb the logo and one man waves a Black Lives Matter flag.

"Whose streets? Our streets" the crowd chants.

6:20 p.m.: Police SWAT vehicles rolled into the street in front of the CNN Center as people in the crowd shout, "We're not leaving so you'd better leave."

Let it be known that if shit happens in Atlanta tonight, it's because SWAT showed up and tried to stop Americans from exercising their right to free speech. #ATLFORUS #BlackLivesMatter #Floyd— EmilyJordan #WeAreStarfleet (@Ms_EmilyJordan) May 29, 2020

The chief of police in Atlanta talking and listening to everyone that has something to say#ATLFORUS #AtlantaProtest pic.twitter.com/qirbQRgViU— BLACK LIVES MATTER (@joonhopekook) May 29, 2020

5:50 p.m.: The crowd is becoming increasingly agitated and that includes officers in front of the CNN Center. An officer over a loudspeaker gave people three minutes to clear out of the street. A line of officers can be seen facing off with people in the middle of the street.

“When lives and the conscience of this nation are at peril, we as a people are expected to exercise our Constitutional rights to peacefully assemble and have our voices heard. Atlanta embodies these values, and I encourage all who exercise these rights to remember Atlanta’s legacy of peaceful protest leading to progress.”

5:45 p.m.: Protesters stop in front of CNN Center and proceed to chant. Officers are on the scene with sirens from their motorcycles. One woman fought with an officer over what appeared to be a police bicycle. Tear gas was used in the crowd and at least one man was placed in handcuffs by Atlanta police officers.

5 p.m.: Large crowds of seemingly peaceful people have arrived at the Capitol. Some chant "No justice, no peace. No racist police," while others shout expletives into the air directed at officers.

4:30 p.m.: Demonstrators are heading toward the State Capitol as cars honk rapidly at people marching down the street. Atlanta police officers are keeping the peace on bicycles. Rain from storms earlier in the day has cleared up and the sun peeked out to warm the air to 83 degrees.

Protesters begin marching near Centennial Park calling for justice. "What do we want?" the leader calls. "JUSTICE," the crowd responds.

Seven people in Kentucky were shot during protests Thursday night, while protests in Minnesota resulted in looting and the arrests of journalists and producers from Cable News Network live on air.

Omar Jimenez was speaking to a live audience when state police arrested him and other members of his television crew. Jimenez, who grew up in Kennesaw, is African American and Latino. He was taken into police custody with two other CNN employees, according to the company.

MORE: Who Is Omar Jimenez, The CNN Reporter Arrested While Covering Minneapolis Protests?

Brett Bramble is one of the people who showed up to show his support for the movement.

"Social injustice is not OK and I'm tired of seeing it," he told GPB News. "I want people to know that I care."

Zoe Bambara, one of the organizers of the Atlanta For Us march, told GPB News earlier Friday that standing up for the black community is part of her DNA.

The 19-year-old says she’s inspired by her grandmother, Toni Cade Bambara, who was an activist in the ‘70s, and taught at Spelman College. Bambara's grandmother also authored several books including Those Bones Are Not My Child about the Atlanta Child Murders, which was edited by Nobel Prize winner Toni Morrison.

“My mom has sent me notes of my grandmother and Toni Morrison and Audre Lord and all these people," Bambara said. "So, I'm like I'm really motivated. I know that I have is in my blood, basically.”

Though the deaths of Arbery and Floyd brought widespread, national attention, Bambara said she was more moved to organize Friday's march by the lack of coverage over 26-year-old Taylor, who was killed by police in her Louisville home in March.

"For me, it was Breonna Taylor because I haven't seen anybody post about her," Bambara said. "Black women tend to be ignored."

My father said, “A riot is the language of the unheard. And what is it America has failed to hear? ...It has failed to hear that the promises of freedom and justice have not been met."— Martin Luther King III (@OfficialMLK3) May 29, 2020 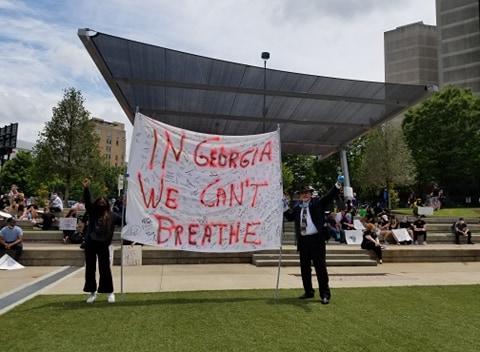 People gather in Atlanta ahead of a march for justice after killings of black people across the nation. 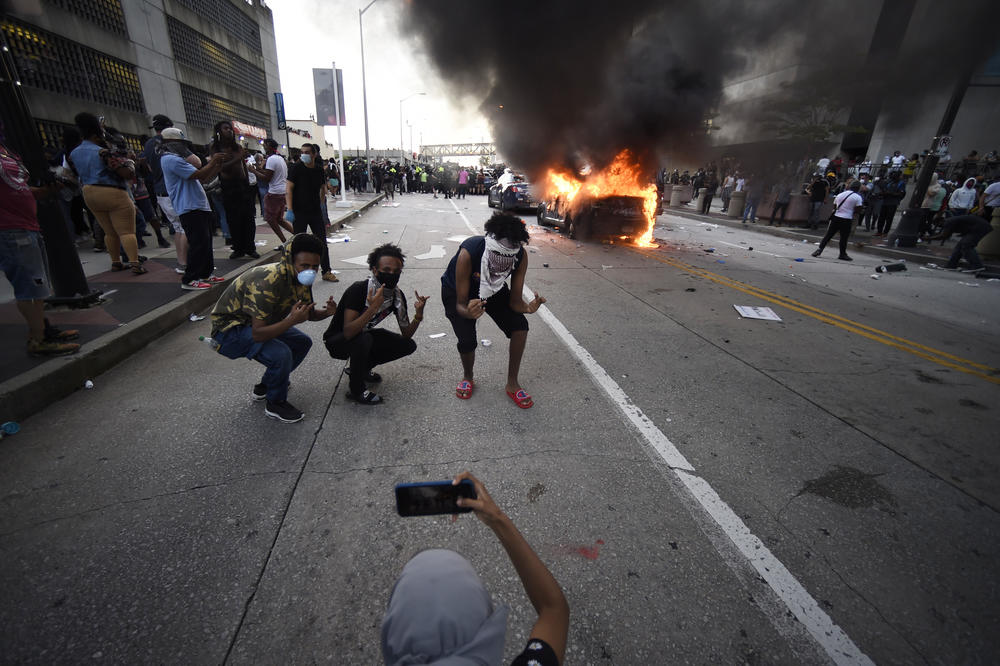 An Atlanta Police Department vehicle burns as people pose for a photo during a demonstration against police violence, Friday, May 29, 2020 in Atlanta. The protest started peacefully earlier in the day before demonstrators clashed with police. / AP 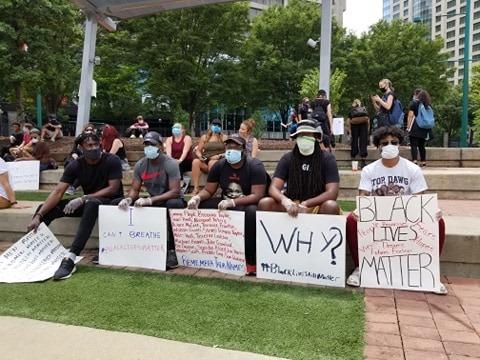 People gathered in Atlanta Friday, May 29, 2020, for a justice march after the deaths of black people by white people including police officers garnered national outrage. / Contributed 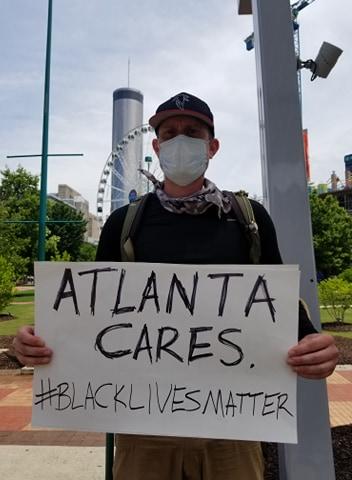 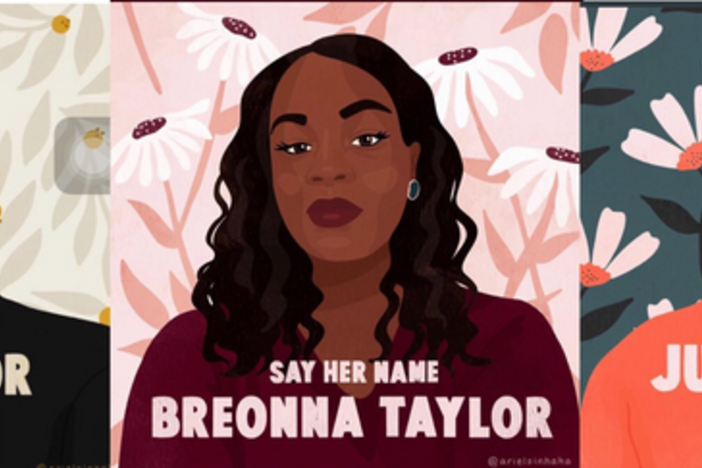