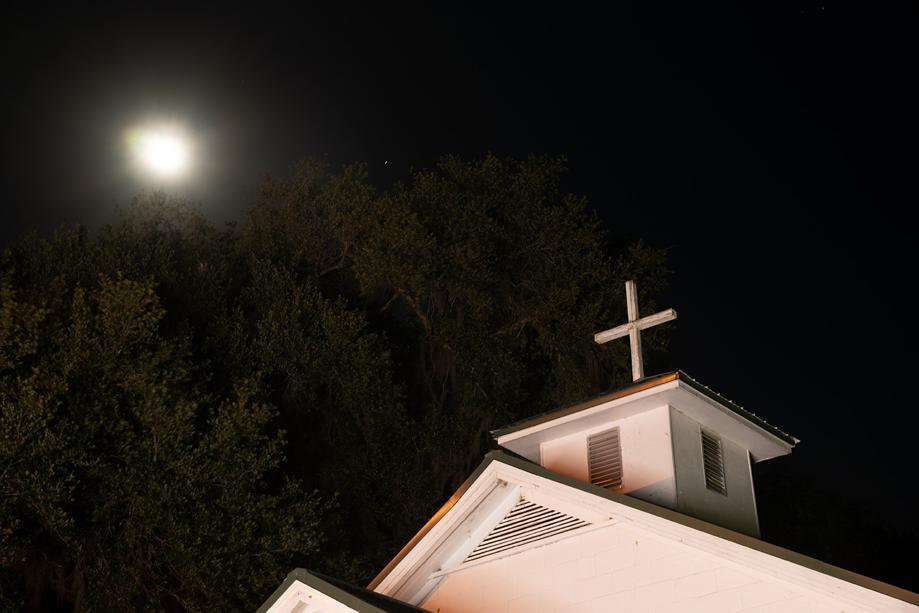 The Rising Daughter Baptist Church in Spring Bluff, Georgia was the site of a double murder in 1985. New details on the case, thanks in part to reporting done by AJC reporter Joshua Sharpe, led to the GBI reopening the case earlier this month.

On Mar. 11, 1985, Harold and Thelma Swain were shot in the vestibule of a Baptist church in rural southeast Georgia during evening Bible study. Witnesses from the black congregation described a white man with shoulder-length hair who fled the scene.

Despite years of investigation by both the local sheriff’s office and the Georgia Bureau of Investigation, the case had gone cold by the end of the decade; even the leads generated by a 1988 episode of Unsolved Mysteries about the case proved false.

But after sitting unsolved for over a decade, the case got a jumpstart with a new investigator put on the case in 1998. And in 2003, a man named Dennis Perry was convicted — despite questionable evidence — and is currently serving two life terms in prison.

Still, some details about the case have troubled investigators throughout the years. The Georgia Innocence Project got involved, and the Undisclosed true crime podcast uncovered new issues with how Perry was prosecuted, and other findings.

The close scrutiny on Perry’s conviction spurred reporter Joshua Sharpe, who covers criminal justice for the Atlanta Journal-Constitution, to revisit an early suspect’s alibi. Sharpe’s findings led to new DNA evidence and, on May 12, the GBI reopened the investigation of the double murder.

The AJC published Sharpe’s 32-page longform narrative last weekend, along with an online documentary and podcast that explain the dramatic turnaround in the 35-year old case. Sharpe joined On Second Thought to talk through details of the case, share recordings from his conversations with the former investigators and suspects, and reflect on what it feels like to have been a part of potentially exonerating someone.

You can read or listen to Sharpe’s full story on the AJC’s website, as well as watch the documentary with interviews from people close to the story.

On the Swains, the couple murdered in 1985

They were beloved. I just never found anyone who had anything bad to say about these people. And to the contrary, everyone had just glowing things to say about these people. Harold Swain was a retired pulpwooder, and he spent his time after that just sort of helping people. He would go to neighbors' houses and ask if they needed help with yard work for no reason. He would just show up, [and ask] "Hey, do you need anything? What can I do for you? How can I help you?" And that is sort of how he is remembered around Spring Bluff, this person who you would never think would fall victim to a crime like this.

And his wife, Thelma, was much the same. She wasn't out in the community quite as much because she was a homemaker and she doted after their adopted daughter, but she was very active at the church, she took minutes at the church mission meetings, [and] she was involved in their outreach to people in need in the community. Speaking with people who knew her, there's one story that always sticks out with me, and that was that one of her brothers was in World War II and he came back just really damaged from the experience. And when he needed a place to go and deal with this dramatic PTSD that he had, she brought him into their home. And he lived there and she helped him fight through these just explosive, terrible flashbacks that he had for years and years.

On Butch Kennedy, the local investigator first put on the case

Butch Kennedy is a sort of a born police officer. This man grew up in the Telfair County jail. His father was the chief sheriff's deputy in Telfair County, and his family lived in a suite under the jail. And he idolized his dad. He liked everything about his dad, so he wanted to follow in his father's footsteps.

And, you know, some of Butch Kennedy's earliest memories in life are chatting with inmates there at the Telfair County jail. I think there was one that used to make him toys. These are good memories for him. He just wanted to be in that world. And he had some success; he ascended the ranks at the Camden County sheriff's office. And then when he got on this case, he knew that he’s the lead investigator, he knew that this was something that he had to solve. He knew these people; he knew how good these people were. He knew how traumatic this event was for all the other people who were in the church that night. He put it all on his shoulders. He was going to be the man solve it.

On Dennis Perry, the man jailed for the last nearly 20 years

Life for Dennis Perry has certainly gotten much worse. He's been behind bars for 20 years now, praying for someone with the power to do something about it to believe that he's innocent. And after he goes to prison, he says that he ends up breaking it off with his wife because he doesn't feel like she had signed up for this, had not signed up to be married to a man who was going to be [in] prison for the rest of both of their lives. And he goes through what I can imagine are a few years of despair, and then another woman comes along, a woman whom he had known for years off and on in Camden County. He'd never dated her, but they knew one another. And they started exchanging letters and they end up falling in love. They end up getting married in 2009 at the prison.

Talking to Dennis about his new wife, Brenda, and talking to Brenda about Dennis, it's just a love fest. I mean, they cannot say enough nice things about each other. They are so madly in love and they have been all this time. Their lives right now pretty much revolve around Dennis' trouble, and they dream of the time when they can be together.

If you look at the hairs compared with the other evidence that there is against Sparre, then it becomes more compelling. You had two ex-wives saying that Sparre confessed to the murders. You have both of those ex-wives saying that Sparre is a violent racist. You have Sparre somehow ending up with an alibi that contains fraudulent information. You put all that together? This forensic expert told me that Sparre would be pretty unlucky to match [DNA] and have all those different things lined up against him. So where do I see the case going? I don't know, because the GBI is being pretty tight-lipped about what they're finding at this point. But the experts I've spoken with say that it seems as though a case could be made against Erik Sparre.

On parallels between Perry’s case and Ahmaud Arbery

If there's a parallel, it's the word "sluggish." [...] I'm hearing a lot of complaints from people who say that Jackie Johnson should have moved much faster than she did after learning about this new DNA linking Sparre to the crime scene. It took six weeks for her to ask the GBI to open investigation. Now, I spoke with former D.A.s, former judges, law professors; I spoke with former Chief Justice of the Georgia Supreme Court Leah Ward Sears. What all of these people have told me is that based on the motion for new trial and other evidence in the case, Jackie Johnson ought to just release Dennis Perry from prison without a GBI investigation.

So she's facing criticism for that, as well as the delay. And the big thing that people have been upset about with the Arbery case is that it took so long for his alleged killers to be arrested. You know, his killing happened in February and the arrests were only a couple of weeks ago. And here we have another case where Jackie Johnson knew for six weeks about exculpatory DNA evidence, in Dennis Perry's case, and did not act until after six weeks to ask the GBI to investigate.