Republican Secretary of State Brad Raffensperger is asking Georgians to return their absentee ballots in time for the June 9 primary election.

Republican Secretary of State Brad Raffensperger is continuing to urge Georgians to vote by mail in the June 9 primary, especially after reports of long lines and some election offices shut down by the virus.

As of Saturday, at least 1.5 million registered voters have requested an absentee ballot, more than 551,000 Georgians returned those ballots and another 77,000 voted in person.

For those million or so voters that have received a ballot but not yet filled it out, the secretary of state implored them to return their ballots sooner rather than later.

“The shortest line that I’ve seen so far is the one at your kitchen table when you have your absentee ballot and fill it out at your convenience,” he said. “Make sure that you mail it back before June 9 at 7 p.m.”

Some counties have also installed secure 24/7 drop boxes for voters to return absentee ballots without needing a stamp or risk showing up to the polls to vote.

Raffensperger also said that the increased interest in absentee voting, facilitated by his office’s decision to mail nearly 7 million Georgians an application to vote by mail, is a good sign that the democratic process is working.

“I think whenever more people come out to vote, it’s really expressing the will of the people,” he said. “It really gives a snapshot of where the Georgian voter is… voter participation is great!”

The first week of in-person early voting was not without problems, as county elections officials and voters alike adjusted to new protocols to protect against spread of the coronavirus.

In Fulton County, longer lines at two early voting site prompted an emergency meeting to relocate voting to a larger room and an expansion of voting hours.

In McDuffie County, two election workers tested positive for the virus last Tuesday, leaving the supervisor and her assistant alone in the office to work through a record number of absentee ballots and applications.

Appling County’s sole voting location, which is the elections office, was closed for cleaning on Friday after one of 28 voters that cast ballots on Wednesday later informed officials of their positive diagnosis for COVID-19.

Nearly an equal number of Republicans and Democrats have requested mail-in ballots for the partisan primary that features the presidential race, a competitive primary for the Democratic nomination for one of Georgia’s U.S. Senate seats and every state and federal lawmaker.

According to voting data from the secretary of state’s office, slightly more Republican absentee ballots have been returned than Democratic ballots, and about 60% of in-person voters requested a Republican ballot last week. 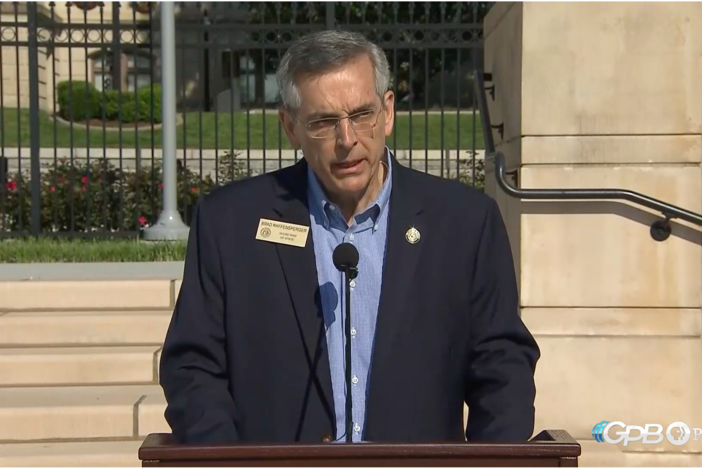 Republican Secretary of State Brad Raffensperger announced Monday a new task force that will investigate allegations of fraud within the absentee voting...