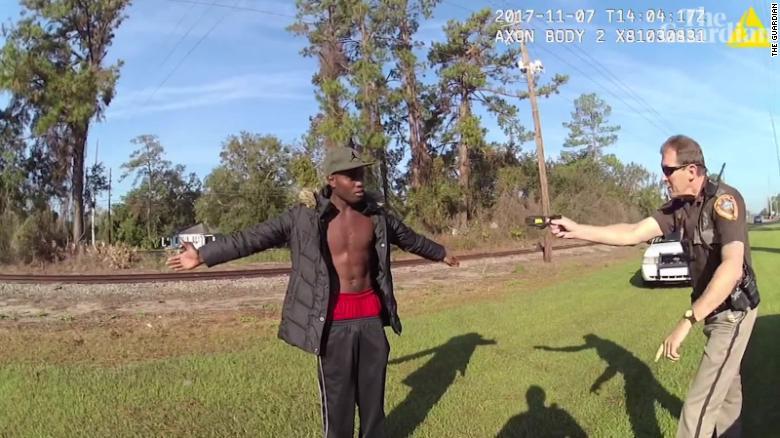 Caption
This image from video posted on "The Guardian" Monday, May 18, 2020, purports to show a police officer attempted to stun Ahmaud Arbery in November 2017.

Glynn County police confronted Ahmaud Arbery, searched and tried to stun him in 2017, according to a police report and police body camera video obtained by The Guardian.

Arbery was killed while jogging near Brunswick on Feb. 23 by Gregory and Travis McMichael. Video leaked two months later, showing the father and son chasing the 25-year-old and shooting him three times, led to national attention. Gregory, 64, and Travis, 34, were arrested and charged with felony murder and aggravated assault after the Georgia Bureau of Investigation was brought into the case.

Details from the recently obtained 2017 police report show an officer was patrolling the neighborhood in Glynn County on Nov. 7, 2017, when he noticed a car parked in an area “known for drugs and other criminal activity.”

The officer approached the parked Toyota Camry as Arbery got out of the car, according to the report. Arbery gave the officer his driver’s license and then the officer said he searched for weapons. Soon after, a second officer showed up.

In the video, police asked to search Arbery’s gold Toyota, but Arbery refused. As Arbery walked toward his car, he was told “don’t reach the car” and “keep your hands out your pockets.”

Shortly after an argument between Arbery and the officers, the second officer attempted to use a Taser, but it malfunctioned. He then ordered Arbery to get on the ground, which he did.

Arbery was free to go following the incident, but Arbery was not allowed to drive because his license was suspended, police said in the report.

Police also reported that Arbery’s car smelled of what they believed to be marijuana and they said they found a bag with “a leafy substance” inside the car.

Defense attorneys for the McMichaels said their clients deserve due process. An outside judge to oversee the cases was announced Monday.

Superior Court Judge Timothy R. Walmsley is based in Savannah, about 70 miles from the coastal community where Arbery was slain.

Cobb County District Attorney Joyette Holmes is the fourth prosecutor in the case after three others recused themselves.