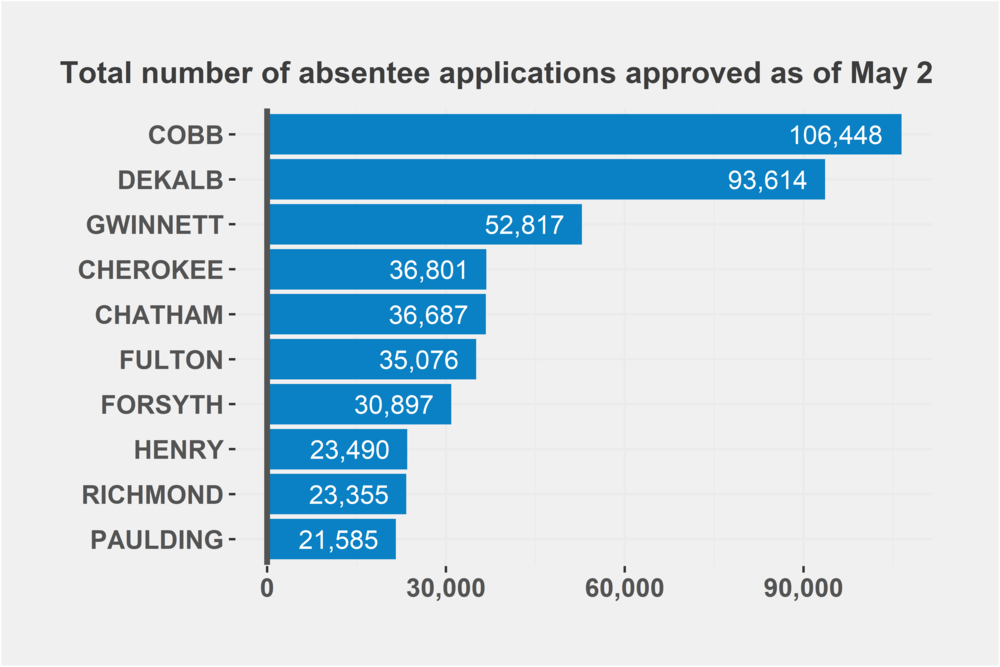 More than 1 million absentee ballot applications have been processed for the June 9 primary election, a number that is expected to grow. These ten counties have approved the most as of May 2. / Georgia News Lab

Nearly two-thirds of Georgia’s 159 counties have approved more absentee ballot requests for the June 9 primary than the total number of votes cast in those counties during the 2018 primary election.

With just over a month until the election, local officials have processed more than 1 million vote-by-mail requests. This unprecedented shift to absentee voting comes after the secretary of state’s office sent absentee ballot applications to all 6.9 million active registered voters last month.

In Jenkins County, just north of Statesboro in southeast Georgia, 790 out of 4,516 registered voters cast their ballots in the 2018 primary. So far, at least 1,300 residents will receive an absentee ballot for the 2020 primary.

At the end of last week, Cobb County led Georgia in approving absentee ballot forms, with more than 105,000 applications processed. In 2018 Cobb voters cast about 83,000 votes in the primary.

Many metro Atlanta counties have been overwhelmed with applications and are working through large backlogs. In Fulton County alone, around 100,000 forms are awaiting processing.

In all, 43 counties have seen at least a 50% jump in absentee ballot requests for the 2020 primary above the number of votes cast in the 2018 primary. Nearly all of those increases came from outside the Atlanta area.

As of May 2, 108 counties had approved more Democratic ballot applications than there were Democratic voters in 2018.

It’s not just Democrats that are applying to vote by mail. As of May 2, 77 counties have approved more Republican absentee ballot requests than there were Republican votes in those counties during the 2018 primary.

Bacon County, for example, had 831 Republican votes in 2018, and has approved more than 1,300 Republican ballot requests this year.

In all, nearly 16% of Georgia’s active registered voters have opted to receive an absentee ballot in the mail as of May 2.

Republican Secretary of State Brad Raffensperger said in a statement that the influx of absentee requests is reflective of his office’s attempt to make voters aware of all the options to avoid in-person voting because of coronavirus concerns.

“Voting in a pandemic will look like no other election our state has seen,” Raffensperger said. “With more than one million application requests and 900,000 ballots in the mail system, we have met our goal.”

The process of running an election has been upended by the coronavirus, as county supervisors work to balance the safety of voters and poll workers with legal requirements that protect the right to vote. The increase in absentee applications has overwhelmed many county offices as staff work to process paper forms from many Georgians who have never before voted by mail.

Officials in Fulton had to delay approving absentee ballot forms after one staff member died from COVID-19 and another was briefly hospitalized. Dougherty County is the epicenter of one of the worst per-capita COVID-19 outbreaks in the country.

Georgia’s June 9 primary election will feature the twice-delayed presidential primary, as well as primary contests for every state and federal lawmaker.

A Georgia News Lab/GPB News analysis finds the increase in absentee ballot requests is the largest for Congressional districts with contested primaries.

This year, both Democrats and Republicans have candidates running in the 8th District, which covers a wide area of south Georgia and is currently represented by Rep. Austin Scott (R-Tifton). So far, nearly 30,000 people have requested a Democratic ballot and more than 47,000 have requested a Republicans ballot.

Democrats have seen a boost in vote-by-mail requests in the state’s Republican-held districts as well, though the overall numbers still lag well behind their partisan counterparts.

Only 20% of the applications processed in the traditionally-Republican 14th District are for Democratic ballots, but those 19,000 requests represent an 80% increase above the number of Democrats who voted in the district in 2018.

In the 11th District, which includes Bartow, Cherokee and part of Cobb County, Democratic requests are running 71% above the number of Democratic voters in 2018.

For the heavily-Republican 9th District, Democratic ballot requests are 55% higher than the party’s votes cast in 2018.

Absentee ballot requests for voters in the 6th and 7th Congressional Districts are lower than 2018 at the moment, but metro counties that make up those seats are still working through a backlog of applications sent through the mail, email and fax.

Raffensperger has said the number of absentee ballots mailed out for this election could top two million as the combination of coronavirus and competitive elections encourages more Georgians to vote in the primary.

Eric Fan is a reporter with the Georgia News Lab. The News Lab is an investigative reporting partnership between Georgia universities, Georgia Public Broadcasting, The Atlanta Journal-Constitution and WSB-TV. The story is part of a series being produced by GPB News and the News Lab. Reporting for this story was funded in part by the Democracy Fund. 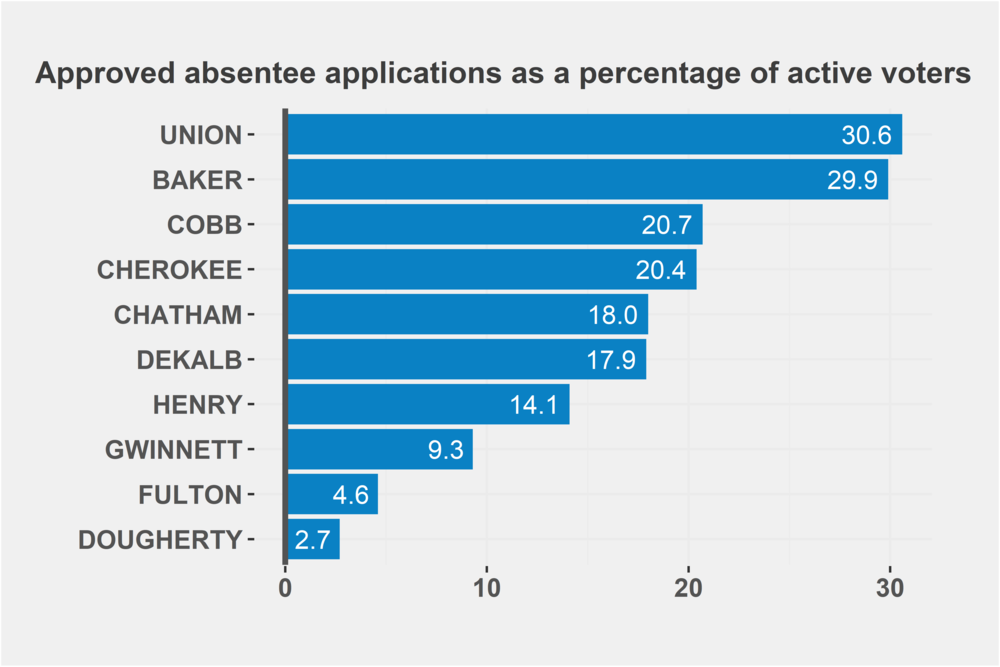 In Union County, nearly a third of the active registered voters have already had their vote-by-mail application approved. On the other end of the spectrum, Fulton County is working through a backlog of applications and Dougherty County is the epicenter of a COVID-19 outbreak. / Georgia News Lab 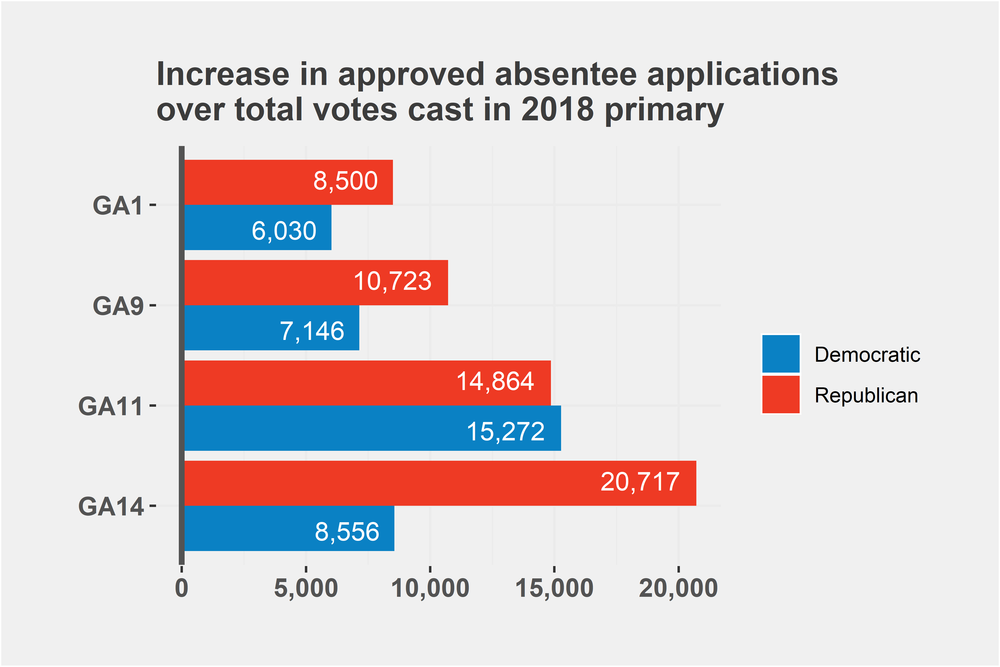 In many contested Congressional races, more Democrats and Republicans are requesting absentee ballots in 2020 than voted in the 2018 primary. / Georgia News Lab