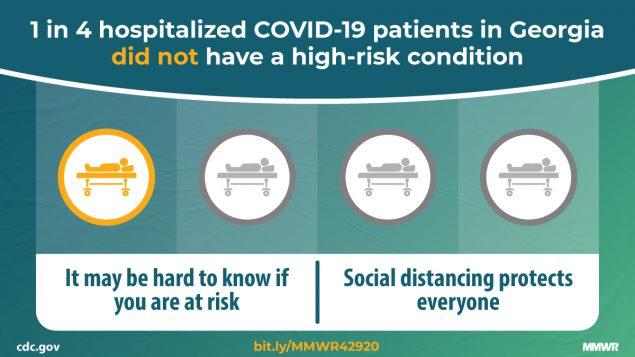 A new CDC study of some Georgia COVID-19 cases found that black Georgians were more likely to be hospitalized, highlighting the demographic disparity in how the virus is impacting the state.

A new study from the Centers for Disease Control and Prevention of some Georgia COVID-19 cases found that black Georgians were more likely to be hospitalized, highlighting the demographic disparity in how the virus is impacting the state.

Here is the latest Georgia coronavirus news for Thursday, April 30.

What’s next for the shelter-in-place order

Georgia's shelter-in-place order will expire for most people at 11:59 p.m. Thursday, but Gov. Brian Kemp is urging Georgians to stay at home while the state continues to combat the virus, the governor said Thursday.

In a video message, Kemp said that a new shelter-in-place order for the "medically fragile" will run through June 12, as will the state of public health emergency.

Other states and counties across the country have extended their respective orders, from several Bay Area counties in California keeping things shut down until the end of May to South Carolina, where restrictions now run until May 12.

Those deemed "medically fragile" include people over 65 years of age, nursing home residents, those with chronic illnesses or are immunocompromised.

For the rest of Georgia's 10.6 million people, the governor is extending until May 13 dozens of extra health and safety rules for businesses that want to open to the public.

There are now more than 25,000 confirmed cases of COVID-19 reported to the state. Monday night, Georgia surpassed 1,000 deaths from COVID-19.

For context, Fulton is Georgia’s most populous county, and the 116 deaths reported there equates to about .11 deaths per 1,000 residents – a death rate 28 times lower than Randolph County.

A study from the CDC looked at hospitalization data from seven metro Atlanta hospitals and one south Georgia hospital in March and found that black Georgians were the majority of those hospitalized.

Of the 305 patients examined, 83% were black, and three-quarters of them were high risk for the virus. The flip side of that is that about 25% of those hospitalized did not have a high risk.

To show the importance of hospital capacity, the study said that the 92 patients that required ventilators comprised 77% of those admitted to an ICU during that time.

Of note, the study found that once hospitalized, black patients were not more likely to need a ventilator  or die of the virus than other racial groups.

“It is important to continue ongoing efforts to understand why black persons are disproportionately hospitalized for COVID-19, including the role of social and economic factors (including occupational exposures) in SARS-CoV-2 acquisition risk. It is critical that public health officials ensure that prevention activities prioritize communities and racial groups most affected by COVID-19.”

Overall, black Georgians are now the majority of COVID-19 deaths in Georgia, according to the most recent data from DPH.

In a new downloadable data sheet, the state has re-added information about the age, gender and underlying condition of deaths in the state, where known.

The youngest death is a 22-year-old woman in Muscogee County who had underlying conditions, one of 164 deaths under 60. The oldest is a 106-year-old man in Mitchell County.

The dataset of those who have died does not include race, but a demographics dataset shows that 565 of the 1,100 reported deaths in the state are black residents, compared to 465 white residents and 44 where the race is unknown or missing.

Even a subset of data about healthcare workers affected by the virus show that black women make up 40% of those with confirmed positive cases.

Asymptomatic testing could tamp down spread

On Tuesday, Ebenezer Baptist Church in the Beall’s Hill neighborhood of Macon was a site for these tests. While there, a mix of Air National Guard and National Guard members collected about 100 tests. Those tests are going back to Augusta University where medical technologist Kelly Foss and others will analyze them.

Foss says results from tests of people who aren’t sick with coronavirus serve a different purpose than tests of those who already know they are ill.

"The numbers can be skewed when you test only the sick population," Foss said. "Because obviously the number and the percentage of positive tests that you receive will be higher than if you're out there just testing normal population."

By finding the infected who aren’t yet sick, Georgia Department of Public Health epidemiologists can put together a more complete model of where coronavirus is in Georgia communities before it creates a health crisis.

The DPH has updated its dashboard to include more charts and graphs about the coronavirus’ spread, including the infection rate per 100,000 residents, average case and death rate. Most information on the dashboard will be updated hourly.

But the colorful graphs and charts can provide a misleading picture of how the state is combatting the virus.

But on Georgia’s COVID-19 dashboard, the “cases over time” graph appears to take a nosedive starting April 20 and says at most, only 552 cases were confirmed in a day over that time period and the average of a day and the previous six days is steadily decreasing.

Well, that chart shows the date a positive COVID-19 case is assigned to, not the date it was reported to the state. So most of those cases reported in the last week are actually on the graph – several days earlier.

Couple that way of accounting with the acknowledgement that the last two weeks of data are incomplete, and you’re always going to have the appearance that cases of the coronavirus in Georgia are declining.

But if you do take the rolling seven-day average of raw cases reported, Georgia has seen a slight decline in new cases in recent days.

Starting this week, DPH along with the CDC and the Fulton and DeKalb County Boards of Health will begin an antibody testing survey. The goal is to better understand how many people may have already been infected with the virus that causes COVID-19.

“We encourage everyone who is visited by the teams to participate in this very important survey that can help public health officials assess how widespread COVID-19 is in certain areas,” said DPH commissioner Kathleen E. Toomey. “This is another way that Georgians can play a role in helping fight this virus.”

Teams of public health professionals will visit randomly selected homes in different areas of Fulton and DeKalb counties until May 4.

Residents will be asked to answer questions and provide a blood sample for antibody tests.

Only homes that are selected can participate.

They were chosen from the U.S. Census Bureau and participation is voluntary. Participants will be able to identify teams by their CDC vests and CDC badges. Workers will also have an official letter from the CDC and DPH.

What do poll workers do with a potential sick voter?

Georgia elections officials face a daunting question as they prepare for early voting in the June 9 primary in the midst of a global pandemic: What do they do if a voter appears ill?

“I’ve asked for guidance from the state as to what we’re supposed to do if a manager notices anyone in line with symptoms,” Fulton County Elections Director Richard Barron said at a recent elections board meeting. “I still haven’t heard back.”

GPB News and the Georgia News Lab asked dozens of county supervisors how they would handle such a situation. None reported receiving any guidance from the state elections officials as of publication, leaving local officials to determine how to balance health and safety concerns due to COVID-19 against the fundamental right to vote.

Both state and CDC guidelines say nothing about what, if any, actions elections officials should take if a voter shows symptoms of the virus at the polls.

The result is a patchwork of interpretations about how to proceed.

READ MORE: “You can’t deny somebody the right to vote.” 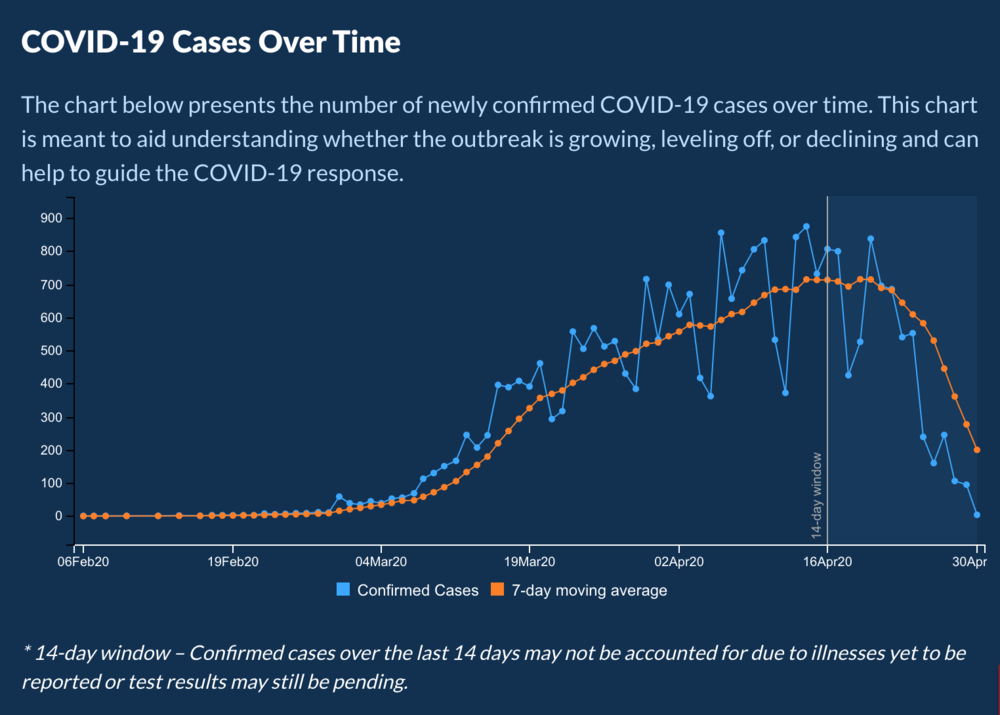 Data from the Georgia Department of Public Health shows a sharp decline in COVID-19 cases over time - but that is because this graph reflects the date cases are assigned as starting, not the date they are reported to the state. 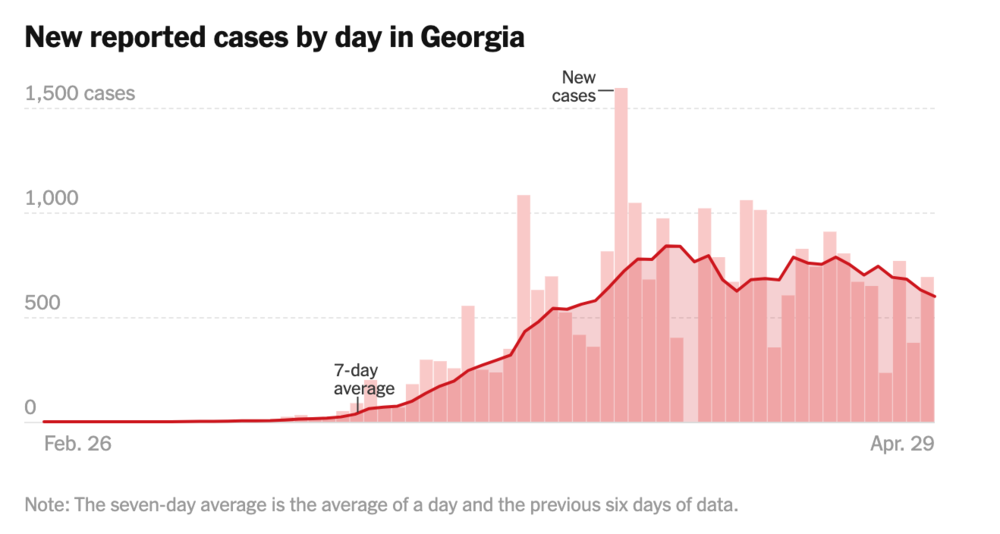