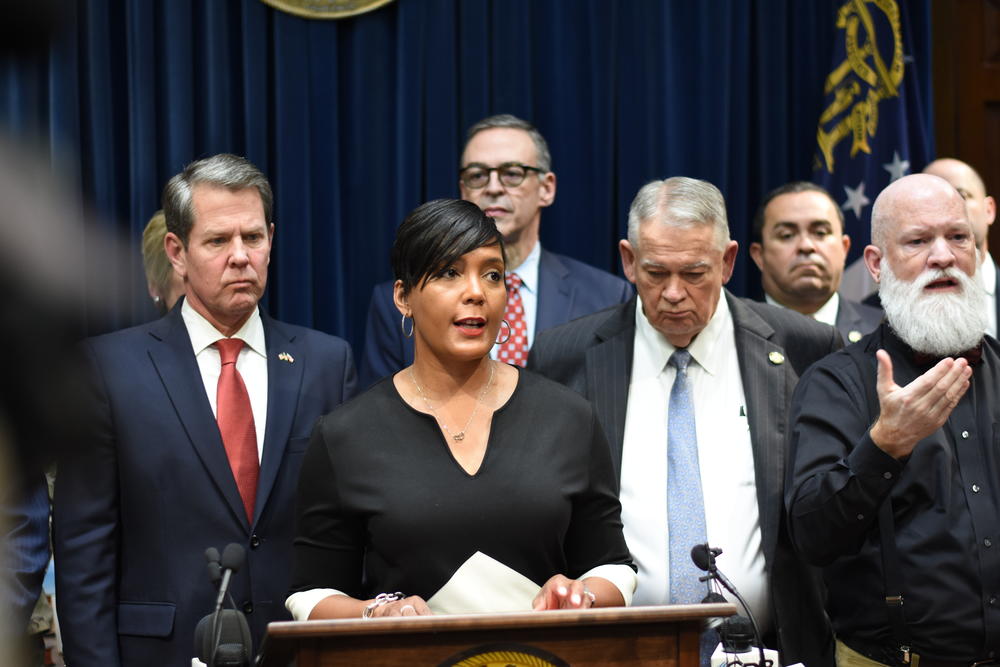 In the hours after Gov. Brian Kemp announced the plan to reopen parts of Georgia’s economy, Atlanta Mayor Keisha Lance Bottoms told CNN’s Chris Cuomo she was “at a loss” trying to understand the governor’s decision.

Since then, the Democratic mayor has kept a dizzying schedule of local and national media appearances, giving dozens of interviews across television, radio, and print as news consumers clamor for insight about the executive order that was so ill-received that President Trump even backtracked his support.

Bottoms serves as a ready-made foil to the Republican governor’s much-maligned order that allows salons, barbershops, gyms and other businesses to return to action under new health and safety protocols.

Last night on CNN, the mayor said it was frustrating to watch people ease up on social distancing measures as the coronavirus continues to spread.

“What we are essentially saying in Georgia is go bowling and we’ll have a [hospital] bed waiting for you,” she said. “That’s not what our approach should be to COVID-19.”

When people began trickling in to nail salons on Friday, Bottoms tweeted out the latest COVID-19 statistics for the state as a warning.

Bottoms has been riding high on the national media circuit as a voice for local leadership dealing with the pandemic, and is booked at least two days out for interviews.

The mayor also went viral after someone sent her and her 12-year-old son a racist text message Wednesday night.

Bottoms has been a longtime Biden surrogate, and prominent U.S. Rep. Jim Clyburn (D-S.C.) told the Financial Times that she would be an excellent pick, as would other prominent black female politicians.

“There is a young lady right there in Georgia who I think would make a tremendous VP candidate, and that’s the mayor of Atlanta, Keisha Lance Bottoms,” he said.

It’s not just her message: the media-heavy approach to the coronavirus response in Georgia runs counter to Gov. Brian Kemp, who has done few interviews about his reopening plans, opting instead to hold lengthy question-and-answer sessions following weekly briefings.

Monday night, Kemp lambasted media coverage of the state’s reopening plan and lashed out at an NBC News reporter who asked about the data that helped guide his decision.

“It might be hard for NBC News to understand this, but all the data is publicly available on the public health department’s website,” he said. “As I’ve said before, I made those decisions in conjunction with Dr. Toomey and many, many other people following the data, and there’s a lot of data that we’re following.”

On the Tamron Hall show yesterday, the mayor was asked why she thought Kemp made the decision to lift some restrictions ahead of the state’s shelter-in-place order expiring.

"The only thing I can think of is this is driven purely by economics,” she said. “We are facing a $4 billion shortfall in our state's budget, and I know that when people fill out unemployment applications, they are asked, 'Do you have the ability to go back to work?' So perhaps this will impact the benefits that have to be paid out to people.”

More than 10% of Georgians have filed for unemployment since mid-March, overloading the state’s system and painting a dire economic picture for the place often touted as the “number one state to do business” by top Georgia politicians.

The state’s budget does not include funding for unemployment, which is paid through taxes from employers, and the state’s labor commissioner says Georgia has about six months left in the fund.

A spokeswoman for the governor’s office said Kemp respects the mayor and has an “excellent working relationship with her office,” and reiterated that his coronavirus response was focused on the health and well-being of Georgians.

“Our next measured step is driven by data and guided by state public health officials. We will continue with this approach to protect the lives - and livelihoods - of all Georgians,” Kemp has said repeatedly.

Speaking on The Daily Show With Trevor Noah, Bottoms acknowledged the strong working relationship with Kemp but said that the consequences of Kemp’s decision being the wrong move are fatal.

“He is a Republican, I of course am a Democrat, and so we cross the aisle quite a bit to work together,” she said. “But this is something that I feel very strongly about because lives are at stake…. I hope that I’m wrong on this and he’s right.”

Another reason for the opposition is a provision in the governor’s order that prohibits local governments from enacting tougher or lighter restrictions until the public health emergency expires May 13.

Mayors around the state have expressed concern about their inability to regulate their local communities.

And Albany Mayor Bo Dorough, who oversees a city hit harder by COVID-19 than almost any other place in the country, said the governor made the “wrong decision.”