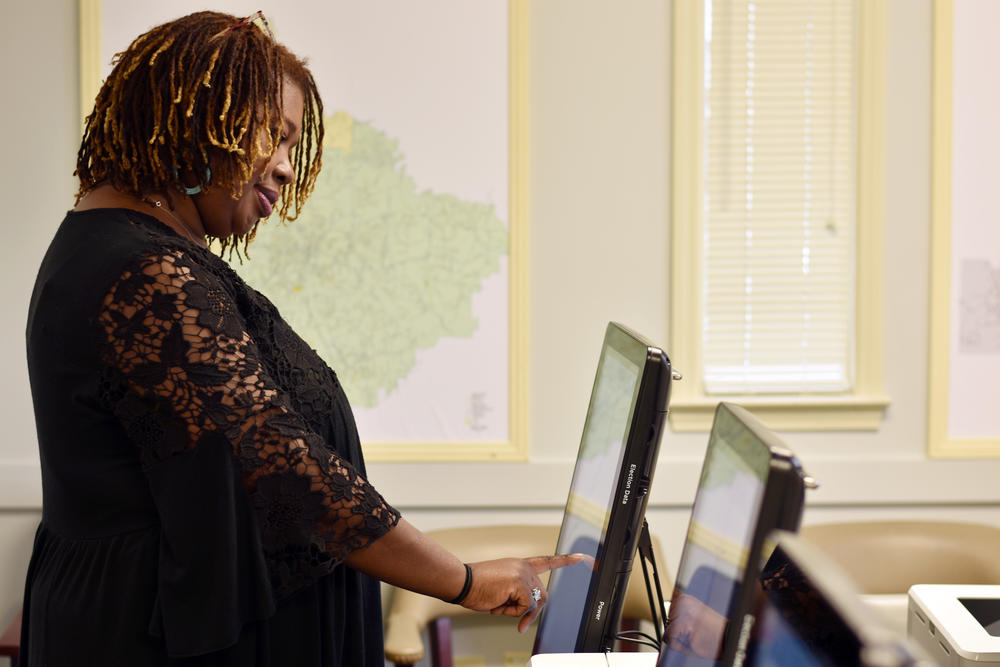 As coronavirus continues to spread in communities across Georgia, elections officials are grappling with the challenge of running a safe, fair and secure election during a pandemic.

GPB News and Georgia News Lab reporters spoke with more than half of the state’s 159 county elections directors who described an extra layer of uncertainty — even fear, in some cases — about preparations for the May 19 primary.

Georgia’s poll workers are typically older, a population with higher risk of serious illness from the virus. Churches, senior centers and other non-government buildings that were slated to open up for Election Day March 24 might be unavailable.  Social distancing guidelines that limit public gatherings could hamper a new voting system designed to speed up the process.

Three times a day, when an alarm sounds on Veronica Johnson’s phone, she says a prayer for people she knew who have died from COVID-19.

The Lee County elections supervisor also prays for her daughter, who works as a nurse at Phoebe Putney Hospital in nearby Albany.

The southwest Georgia county is in the middle of an outbreak that has affected the region harder than nearly any other area in the country.

RELATED: How Albany Emerged As A Global COVID-19 Hotspot

“This is very unprecedented,” she said. “I've been doing this 20 years and I can't wrap my head around everything that needs to be done right now.”

Johnson and the rest of Georgia’s 159 elections directors are navigating a new reality of running an election – on a new voting system no less – in a time when Georgians are being urged to stay home and avoid being around other people.

“I'll be honest, it is getting a little scary,” she said. “At first it's ‘go with the flow and do what you're told,’ social distancing as much as you can and hand washing and all of that. But after a while, it really starts to get to you.”

The secretary of state’s office is mailing out absentee ballot applications to 6.9 million active registered voters this week to encourage people to vote by mail instead of  showing up at the polls.

Fewer than 10% of voters used absentee ballots in the 2018 gubernatorial election. That’s why some officials anticipate it will take more work to educate voters about the absentee process.

“This is the first time that a lot of people will be voting by absentee ballot,” Rabun County Elections Supervisor Tammy Whitmire said. “The most important thing is to make sure they fill out the application all the way through, make sure that they sign it, and that they choose which ballot style that they would like.”

The large volume of mailed ballots also means it will take more time for county elections staff to process the ballots too.

“We’ll have our gloves on and all that kind of stuff too, opening and counting the ballots,” Monroe County Elections Supervisor Kaye Warren said. ”I mean, yeah, I myself... I'm afraid. I wouldn't come out probably if I didn't have to. I’d probably want to vote by mail, too.”

"Calm before the storm"

More than 140 of the state’s 159 counties have reported at least one positive COVID-19 case.

In Jefferson County, near Augusta, there are only two cases reported. Even so, elections director Susan Gray says there’s more uncertainty to come with the spread of coronavirus.

“I don't think we've seen what it's going to do yet,” she said. “And I'm not trying to paint gloom and doom... I just want to be realistic. I think this is just the calm before the storm.”

The county has eight polling places for its 11,000 registered voters. Gray said she knew of at least four poll workers who had doctor’s orders not to work the March 24 presidential primary. That was days before Secretary of State Brad Raffensperger suspended in-person voting and postponed the election to May 19.

Many counties across Georgia, from Jefferson to Toombs, Haralson and Rockdale, reported a dip in the number of poll workers. In Cherokee County, 50 out of 400 poll workers quit over health concerns.

“A huge concern of ours is finding poll workers because there’s such a fear [of] going out in public, coming face to face with people,” Paulding County Elections Supervisor Deidre Holden said. “So we’re having to step back and figure out what we’re going to do.”

While many counties use public buildings for polling places, some contract with churches, malls, event spaces and other privately-owned buildings.

That’s the case in Paulding County, where Holden said she encountered issues with some private entities no longer willing to open up as a polling place.

“Some said yes, some said no,” she said. “So there’s a lot of counties that are trying to shuffle around and try to find places to have the elections when our polling places that we already have designated won’t allow us back in.”

In Lowndes County, supervisor Deb Cox said seven of the 11 poll locations might not be available for May. Several counties also hold elections in senior centers, potentially putting at risk a population that is especially vulnerable to the virus.

Even in places that reported no issues with polling places, officials are trying to balance legal requirements for running elections with public health directives that limit human interaction.

Athens-Clarke County's Charlotte Sosebee said her staff will need to get creative to maximize the number of voters allowed inside a polling place.

Moving to an all-mail election is not possible, she said, because of legal requirements for visually impaired voters or others that need to use the ballot-marking devices.

“I can imagine and hope that maybe 10% vote on Election Day, 10% vote advanced voting and the others vote by mail,” she said.

In Jackson County, officials are working to find a larger space to conduct early voting that allows for more distance between voting machines.

Other counties are in a quandary.

“I still think that there’s some concern — and should be rightly so — asking our voters to congregate in centralized locations,” White County Elections Director Garrison Baker said. “That’s why this push for the absentee is so important.”

Calls for delaying the election, again

Some of Georgia’s top officials have asked the secretary of state to postpone the election, again, to mid-June.

House Speaker David Ralston (R-Blue Ridge) said he heard “a resounding chorus of concern” about a May vote from elections supervisors across the state.

The White House has extended its guidelines for limiting public gatherings to 10 or fewer people until April 30, after mid-April, when scientists project the virus will peak in Georgia. As of Thursday, early voting in Georgia was still on for April 27.

On Tuesday, the state’s Republican Congressional delegation also asked the secretary of state’s office to delay the election.

“Keeping the status quo unnecessarily exposes Georgia’s poll workers to dangerous health risks and creates the possibility of severely understaffed voting locations if those poll workers follow the guidance of federal, state and local authorities,” the letter to Raffensperger reads.

The law allows for the secretary of state to delay the election only once and by no more than 45 days. At this time, action beyond that would require an act of the legislature, but Raffensperger said his office was watching developments closely.

"We continue to monitor the situation with county elections officials," he said Wednesday. "If and when the Governor extends the state of emergency, we can re-evaluate the situation and determine if moving the election is appropriate in light of the circumstances in order to best protect the health and safety of voters, election officials, and poll workers."

In a statement, the Democratic Party of Georgia called for the election to remain May 19 and asked for the secretary of state’s office to expand support for the state’s vote-by-mail infrastructure for the 2020 cycle.

“Rather than delaying the vote, it is critical that the State expand vote-by-mail and make it accessible for more voters,” State Sen. Nikema Williams (D-Atlanta), the party chairwoman said. “Without measures like guaranteeing paid postage for vote-by-mail ballots or expanding this vote-by-mail ballot program beyond the May primary, significant barriers remain for all Georgians to safely exercise their right to vote without risking their health or that of their communities.”

This year’s legislative session is also suspended indefinitely because of coronavirus. At least six lawmakers have tested positive for COVID-19.

County elections officials say moving the election comes with its own challenges.

“The more you push it, the more it's going to affect the November general election,” she said.

Moving the election date could also complicate an already-confusing message to voters.

“Not everybody has Facebook, not everybody is on the internet and checks out the website before they call,” Putnam County Elections Supervisor Lynne Laseter said. “We run into people who don't get the newspaper, don't watch the news.”

For now, the county elections directors are moving forward with a plan that expects to see more paper, fewer poll workers and greater uncertainty about what comes next.

“The only thing we're trying to comprehend now as election administrators is how to make this process happen as smoothly as possible in the midst of a crisis,” Bartow County Elections Supervisor Joseph Kirk said.